In an alternate reality where gaming is life, the ending to Indiana Jones and the Last Crusade would feature a large colorful box taken straight from 1995 as opposed to a plain wooden cup from 30 AD. Warhammer Quest has been one of the most influential board game designs in the history of the hobby. Alongside HeroQuest, it birthed a genre of plastic and cardboard dungeon crawls. It’s nostalgia personified and creates a tingle in your belly that dances up the spine and has your hand twitching with phantom dice rolls. Thank Sigmar because this one’s back in a big way. 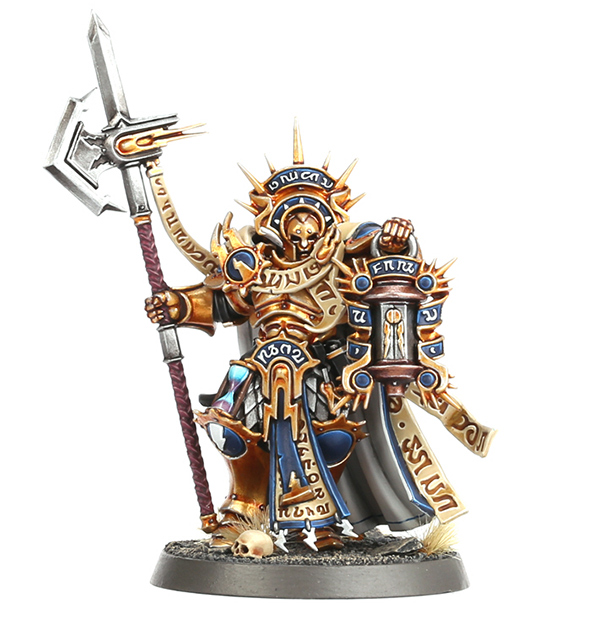 In one of the most surprising twists of 2016, Games Workshop came out of nowhere to release Warhammer Quest: Silver Tower. This cooperative dungeon crawl featured multi-part miniatures requiring assembly whose end result eclipsed all competition in the board game world. This light tactical design contained just enough meat on its bones to maintain interest. It also paired a solid mechanical base with a storybook that afforded glimpses of narrative as you wandered the shifting tower of Tzeentch, Chaos God of change.

Shadows Over Hammerhal is the standalone follow-up to Silver Tower, and it’s a doozy. It feels very iterative as if the design team was listening to feedback concerning the previous work and responding in kind. The structure here is more traditional and provides context to highlight how weird the setting and feel of Silver Tower really was.

In Hammerhal you’re a band of heroes venturing beneath the scarred city to explore a network of dungeons and take on an insidious incursion that threatens the welfare of the populace. A simple campaign structure of gaining skills and equipment is bolstered by the return of the original Warhammer Quest’s town phase. While traversing dungeons you come across stairwells that exit to the city above, allowing you to take a breather and spend your gold in several ways. You can gamble, fight in the pit, and buy new wares. It’s streamlined and simple but it’s effective. That could really stand as a tag-line for this entire design.

The four main characters in this release include a Knight Questor, a Dwarf firearm-wielding tinkerer, an Aelf mage, and a Dark Aelf pirate captain with a blade for a peg-leg. The journey kicks off with an excellent 30-page novella that sets up the background for the campaign and leads to the first dungeon. 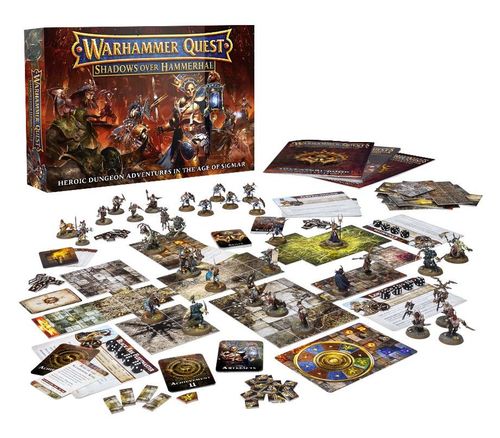 Each player takes a turn activating their hero by rolling a dice pool similar in fashion to Silver Tower. You take your four dice and spend them to perform actions such as attacking or buffing your comrades. You can also explore, search, and rest up. More powerful actions–such as the Dwarf ripping loose with his repeating rifle–require you spend dice showing higher values. This simple and evocative mechanism offers variety coupled with intelligent choices.

One huge paradigm shift is the requirement of a game master. Yes, Shadows Over Hammerhal is a one vs. many style competitive design and it’s for the better. The ability to play solo is swapped for the caverns gaining a significant sense of mystery. The GM will handle unexpected scripted events, traps, and enemy behavior that lie outside the standard systems. It keeps you on your toes and everything feels more organic and natural. Silver Tower’s mechanisms were barer, such as working your way through a seeded deck of cards to determine the dungeon layout, and felt less immersive or frankly shocking. This is an astounding improvement as exploring horrific places needs to include the occasional punch to the gut. You should feel as though the wind has been knocked out of you and you’re continually trying to catch your breath.

The dungeon has also increased in scope. This is due to a simple trick of connecting each section via stairwell tiles. So instead of programmatically playing through the dungeons in order, you gain a tactile feel of exploration. It seems as though this is a place that exists outside your authority and is autonomous. That feeds into the tension-laced atmosphere.

Those qualities of mood are bolstered by a renewed sense of challenge. My largest complaint with Silver Tower was that it was absurdly easy. Shadows Over Hammerhal fixes this by increasing the difficulty naturally, as well as placing more intelligence in the hands of the enemy. The systems are intertwined wonderfully while managing to allow the new content to be reincorporated into Silver Tower. That foresight and two-way compatibility highlights a vision at the top of the development team that promises future excitement. 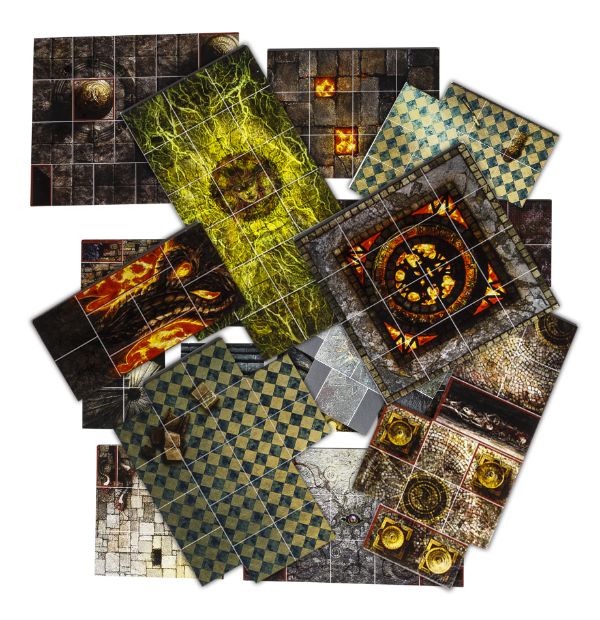 While these iterative improvements are fantastic, there are still a couple of key areas that don’t quite measure up. The first is that the primary villain encountered is another Chaos sorcerer. This undermines the quality of the content as it’s a rehash of the Silver Tower nemesis. A brutish devotee of Khorne or a monstrous creature would have been much preferred.

Additional low-hanging fruit includes enemy stat profiles and behavior charts remaining inside the scenario booklet. Having to page through a manual to find the required information on the enemy you’re facing hampers the sheer velocity of the game. A move to double-sided cards would be an enormous improvement.

The final point isn’t so cut and dry, but the inclusion of only eight dungeons could be problematic for some groups. Replayability is soft in this design due to scripted events losing oomph over time. This will provide 16ish hours of play, but some may scoff at that number in comparison to the three digit price tag.

Shadows Over Hammerhal may not be perfect, but it’s a hell of a time. The improvements contained in this box are wildly successful. Overall, this is a stellar game that eclipses popular competitor Descent while packing in flavor and more innovation. This title may struggle to gain hype with Gloomhaven dominating the conversation, but that would be a sin Sigmar won’t forgive.

Have you played Warhammer Quest in any of its forms? What’s your favorite dungeon crawl? Let us know in the comments below!