War Chest is a new game from Alderac Entertainment Group (AEG) that doesn’t feel as though it was released in 2018, but rather centuries ago. There’s a timeless quality to this game that makes it as rewarding an experience the fifth time you play it as the fiftieth time. I have a particular fondness for games of this type – chess was the first board game I ever learned to play, and it is chess that is War Chest‘s closest comparable. 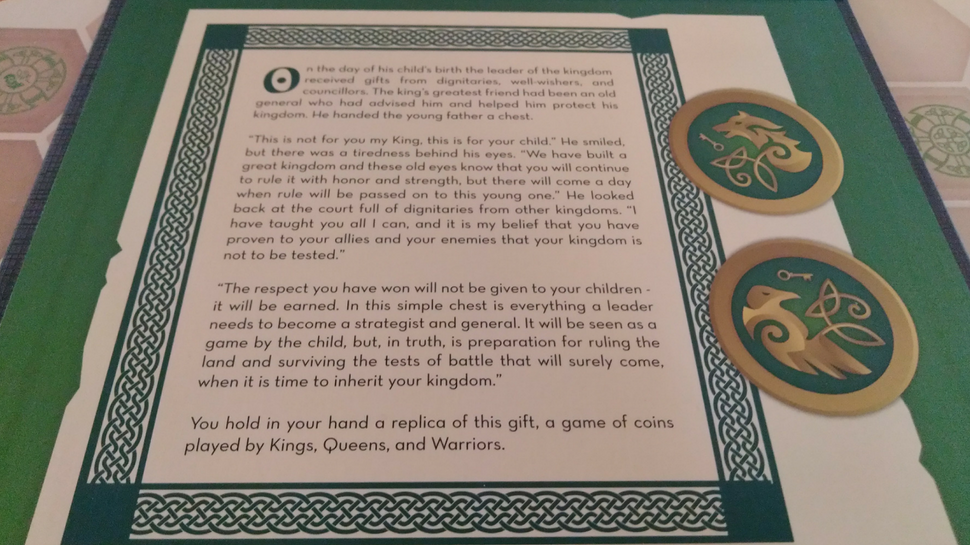 It’s not narrative-driven: there is no grand story or epic adventure you’re embarking on within this game. Like chess, the game offers little in the way of narrative or pretense – the only tidbit of fiction they offer is in the box lid. It tells the story of a game of this sort given to a young royal to build up the skills required for military generalship, and that in your hands you hold a replica of that game. Because of its design, you could almost believe it.

To describe this game as a straight conquer and control game does the game injustice, despite the simple mechanics, which Becca describes in her How To Play War Chest video:


Rounds, phases and actions themselves are very straightforward – draw coins from your bag, alternate using those coins to take actions, and work towards your objective of placing all of your control markers first. The game is simple in that fashion, but it is in the balance of managing actions on the board, the probability of coin draws from your bag, and finding the action economy of your units where the depth of the game lies.

You’re limited to only one of each type of unit on the board, and maneuvering any unit on the board requires you to draw and discard face-up a matching unit coin – one maneuver means playing one coin. With a finite amount of unit coins available, it’s a perpetual balancing act between executing your available actions out of any given draw of three coins, and making the best of them while also anticipating what options are available to your opponent.

Like a classic game, it rewards players for mastery. Developing a working knowledge of the 16 available units in the box and how they can work together in combination means the game has significant replayability. That said, because of the fixed unit numbers and the alternating actions combined with the fixed-probability draw of coins which limit what you’re able to do in any given round, finding action optimizations within the game is both confounding and compelling. It’s not so simple as to operate on an algorithm – players are perpetually responding to each other and their draw, making hard but meaningful decisions throughout the game.

As a modern gamer, what I found compelling was the recognizable elements from modern gaming, but they were presented so stripped down they feel like the ancestral versions of modern game mechanics. Recruiting units to put into your bag to draw harkens to modern-day deckbuilding. Managing the probability of your draws feels like hand management. You get a whiff of worker-placement stylings in the way that some units operate and interact with others on the board.  But it’s all so simplified that any hint of modernity is quickly quashed under the weight of the game’s clay coins.

The elements of modern games make the game feel familiar to seasoned board gamers, but by presenting them in this form, the game’s mechanics are still accessible enough to any gamer who has never heard of the term orthogonally (a pervasive modern gaming term). Part of what makes a classic game feel classic is how intuitively the game plays, even if you can’t name the mechanical elements that make up its design.

On top of that, this game can accommodate more than 2 players, with rules that turn the game into a 4-player, 2 team experience that’s every bit as strategically interesting as it’s 2 player version. That’s something that chess certainly can’t claim. You can see how it all goes down with four around the table in on Game the Game:

Components Fit For A King

Part of the classic feel of this game is derived from what’s in the box. Each unit is represented with a heavyweight clay coin, embellished with the color-coded unit icon (though this game is fully colorblind accessible). The bags from which you draw your coins from are embroidered velvet. The box has a magnetic closure. There’s an heirloom quality to the game’s components. 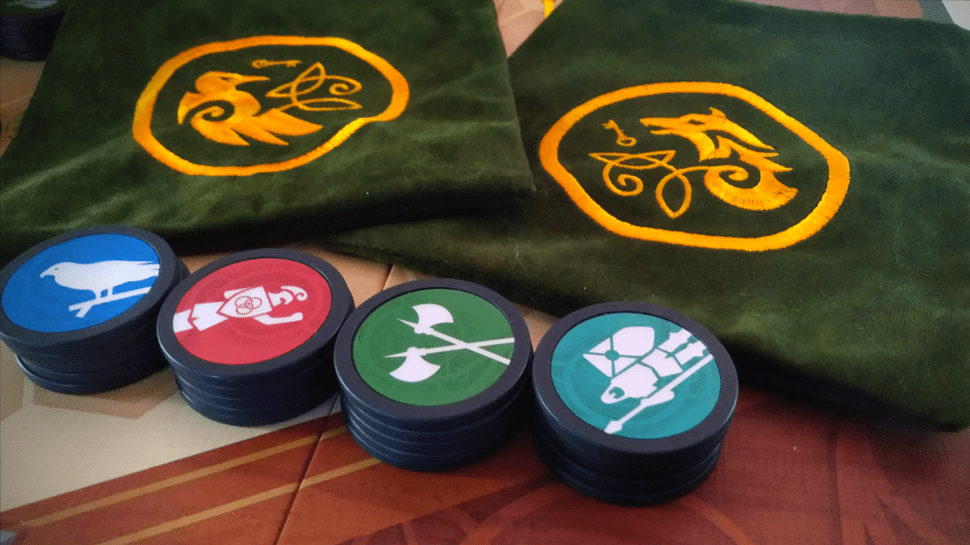 It would be easy to imagine a fictional past where this game, without its unit cards specifically demonstrating how the unit works, would have been played – where a culture carried that knowledge the way that our modern culture has a basic understanding of how chess or checkers works. Ultimately all the decisions made in terms of art and component quality add to the timeless feel of the game.

There are certain qualities some games have that make them feel as though they’ll endure the test of time. They are accessible, with stripped down mechanics, but after several plays you find layers of strategy and complexity that capture your imagination and fill it with even more possibilities. The cliché of easy to learn, hard to master applies to these games because from a play perspective, options seem rather constrained because of the game’s simplicity, but it is in the interactions on the board that make the game tactically compelling.

War Chest is the kind of game that can hang with the likes of chess, Chinese checkers and Go, but even if your tastes are a little more modern, you’ll be able to appreciate this game.

Learn more about the game at  alderac.com and pick it up at your local game retailer!