Is WANDAVISION a Terrifying Psychological Thriller?

WandaVision utilizes the relatively common “Trapped in TV Land” trope which sends viewers back to explore the shared life of Wanda and Vision. The show features nods to familiar sitcoms like The Dick Van Dyke Show and I Dream of Jeannie. However, many viewers noticed a different familiar feeling gnawing away at them throughout the idyllic first few episodes. By the end of episode one, it no longer feels like you are watching a happy-go-lucky dinner with the boss. You’ve somehow been transported into “It’s a Good Life” from The Twilight Zone. Which begs the question, is WandaVision actually a terrifying psychological thriller?

From the start, WandaVision lulls its audience into a false sense of security. There’s the slow pacing, low-stakes conflict, and reduced stimulation. We soon realize we are dealing with an unreliable narrator. Wanda shows signs of psychological distress due to long-term trauma. WandaVision appears to be exploring some sensationalized version of symptoms commonly associated with depersonalization-derealization disorder through Wanda.

According to the Mayo Clinic, common symptoms include a blurred sense of reality, feelings of detachment, the world seeming unreal, and observing one’s own actions, feelings, thoughts, and self from a distance as though watching a movie. A person with dissociative disorders can have traumatic flashbacks. They can be overwhelming and lead towards unsafe behaviors. Wanda (a fictional character with formidable supernatural powers) does not have a proper diagnosis but she’s in a concerning space. 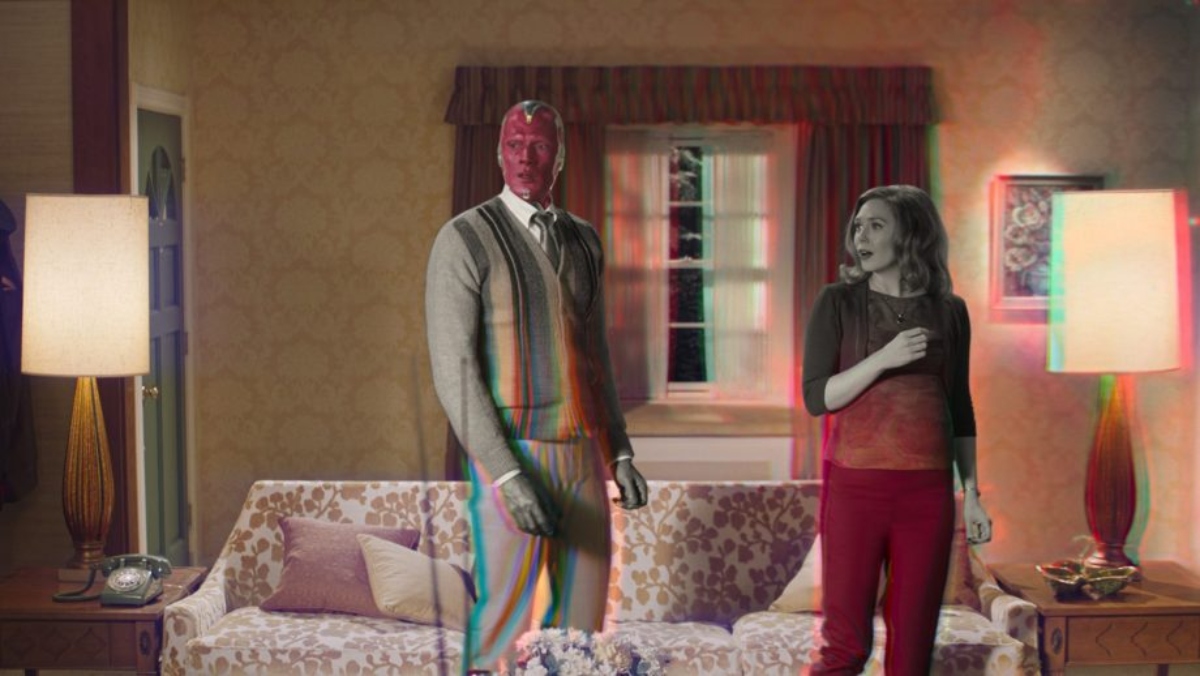 It’s too early to identify all the inevitable red herrings and plot twists caused by her distressed state; but that doesn’t mean that there isn’t plenty to discuss and debate as we try to piece together what’s happening. While there are more fan theories floating around than episodes, there is a decent chance that audiences are watching a horrifying reality unfold. One where Wanda has trapped and forced real people into participating in her fantasy of living with Vision in a sitcom.

They could be kidnapped residents of an existing town, members of various agencies trying to manipulate Wanda into doing their bidding in a fake 1950s nuclear test town, or some other option. Whatever the case, it is apparent that the townspeople are not in full control of their actions most of the time. They randomly exhibit signs of distress and fear when they are around her; this further confirms that the show’s events are impossible in more ways than one.

Wanda becomes dazed and agitated while interacting with others throughout the episodes. At one point, her neighbor Mrs. Hart almost breaks character while begging Wanda to “stop it” before suddenly reverting to “normal.” In episode three, Geraldine’s questions about Pietro and revelation of her Ultron knowledge shakes things up. It causes Wanda to flip an emotional switch and completely boot Geraldine out of the town. This scene is particularly jarring because it doesn’t seem that Geraldine intentionally brought up information about prior events. The resulting panic and confusion is just as unsettling for the audience as it is for Geraldine.

There is no doubt that Wanda has some amount of control over what’s going on in Westview. But with an outside force monitoring her life, her brief moments of alarm and confusion when something challenges her reality, and the strange behavior of characters like Agnes create doubt about who is really “running the show.” We can’t help but wonder, “Who is doing this to you Wanda?”

WandaVision may very well be part of a growing trend of showing the brutal reality of comic book characters existing in “real-life.” FX’s Legion blurred the lines between mental illness and superpowers, while also utilizing a powerful protagonist who was an unreliable narrator. Amazon’s The Boys, directly addresses this concept through extreme violence and various forms of corruption and power. Marvel also previously addressed (albeit in a less graphic way) this with the physical dangers that superheroes pose in Captain America: Civil War.

During the movies we are rooting for the Avengers because we see them as heroes. However, WandaVision asks us to consider what would happen to normal people if superheroes started to struggle under the weight of their very traumatic lives. If WandaVision is any indication, we would be living in fear while playing along with their reality to survive.