WandaVision is finally over. After nine episodes and a jam-packed finale we now know the fate of Westview, its inhabitants, and most importantly Wanda and her family. When we leave the series, things are almost back to where they were pre-WandaVision. Except that now Wanda is a superpowered witch and she’s seemingly taking a mountain vacation. As beautiful as that final post-credits sequence shot was, you should actually be way more excited because if you’ve been reading our coverage you’ll know there’s an important mountain in Wanda’s life. And with the post-credits scene that we got, we think she’s finally made it there.

After the credits, we find her sipping a steaming hot tea in a small hut in the middle of a beautiful mountain range. We would posit that she’s finally returned to her comic book birthplace of Mount Wundagore. First introduced in Thor #134, the magical location was created by the High Evolutionary as a place to do his wild science experiments. Wanda has been connected to the strange space since its first appearance where she and Pietro are trying to track down their birth place. How did they end up being born in a mad scientist’s lab? Well, their mother was on the run from their “superpowered father”—whom we’d later learn was Magneto—stumbled upon Wundagore and gave birth to the twins. She would leave them there to be raised by the bovine humanoid known as Bova.

Why would Wanda go to Mount Wundagore? 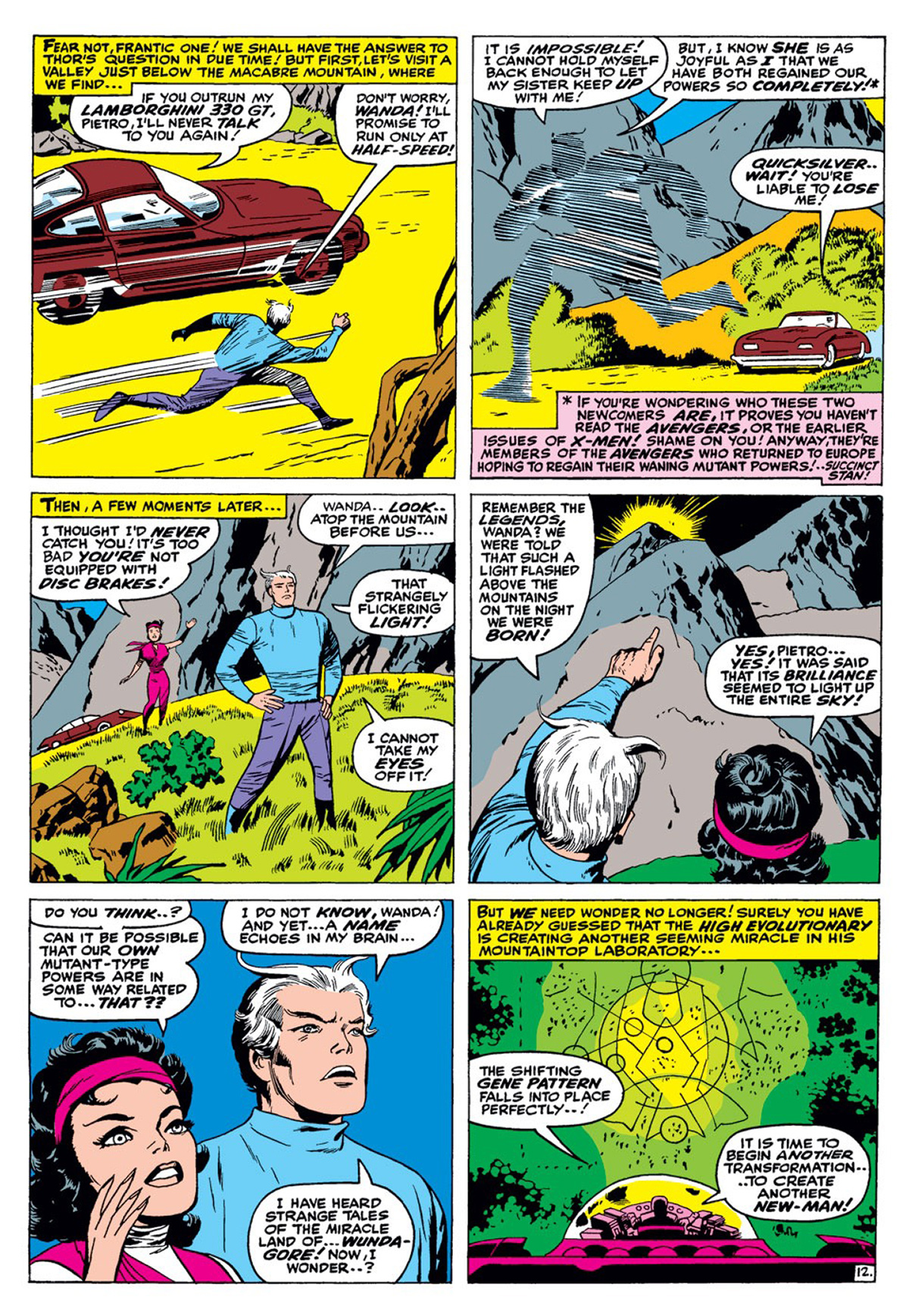 We know that the MCU has covered none of the above. WandaVision has many allusions to Wanda’s unusual past, but there’s something else. Something tying her to Mount Wundagore. The comics reveal that the demon Chthon actually wrote the Darkhold in Mount Wundagore. We’ve long thought he may have something to do with Agatha’s plan or at least with the appearance of the Darkhold in Westview. But even if we haven’t seen or heard from him yet, it’s likely that Wanda would want to go to where the book that holds the secret of her powers was composed. Plus, another aspect of Chthon’s connection to Wanda is that in her early origin he marked her, allowing her to access her Hex powers.

So, basically, Chthon is going to pop up soon. So expect to learn more as she tries to get a handle on her powers.

What does this mean for where we’ll see her next? 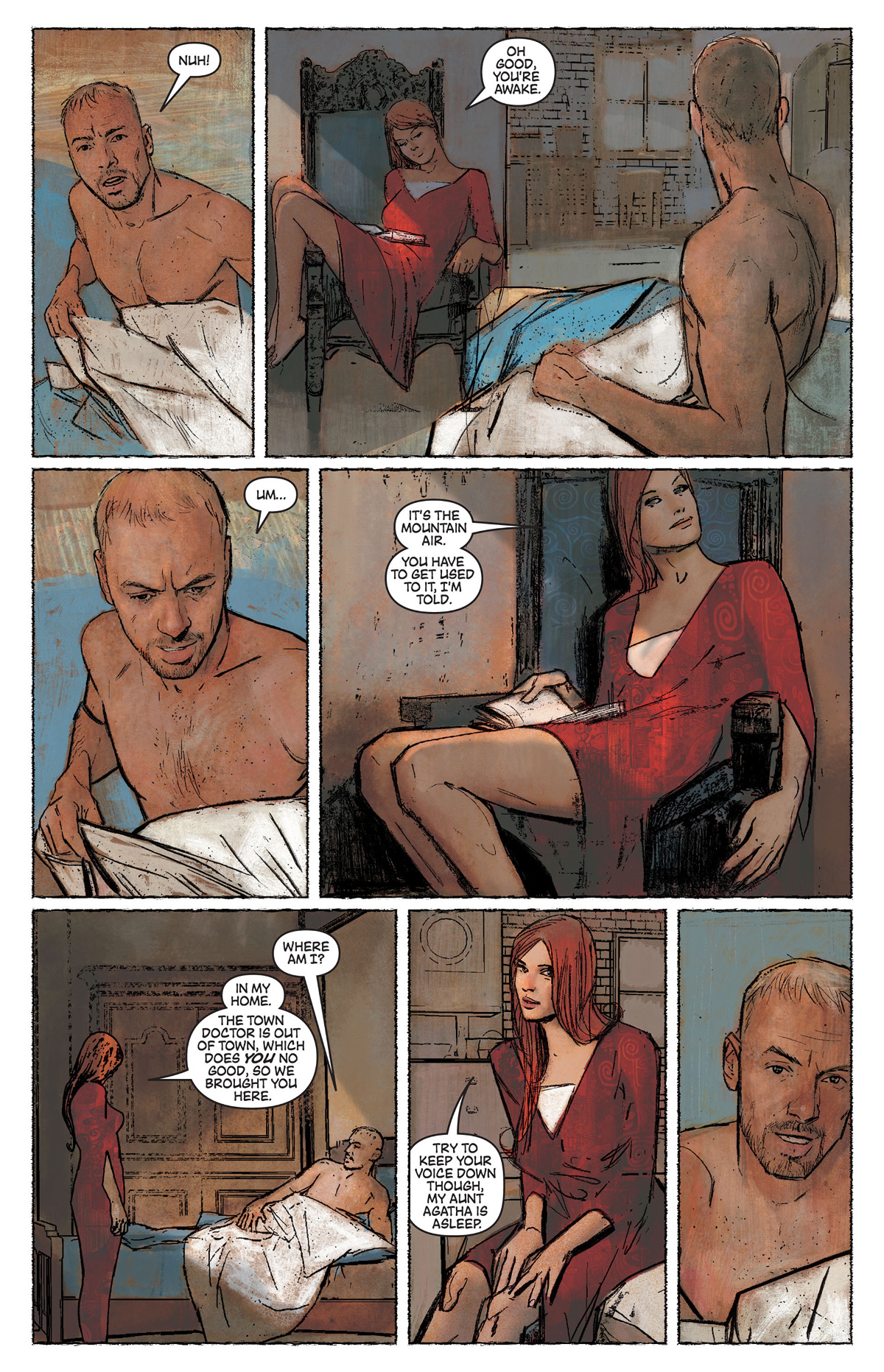 In the before times, Doctor Strange in the Multiverse of Madness was meant to arrive mere weeks after WandaVision. That makes a lot of sense when we think about how we last saw Wanda in a very Stephen Strange style pose, learning all the Darkhold had to offer. It’s especially potent as in the final moments we hear her kids calling out for her to help them. Sadly, we won’t be getting that closure anytime soon. In fact, it’s almost a whole year until we’ll know just what brings the Scarlet Witch and Doctor Strange together. Luckily, thanks to the joys of comic books, we can make some educated guesses.

Many fans thought they might see Wanda going off with Strange at the end of the finale. Thankfully, the creative team went for a story that gave Wanda more agency. But now she’s got that power, what is she going to do with it? It seems like she’ll likely try to bring her family back or find a way to save her sons. The Mountain is often a place Wanda returns to when someone that she loves is hurting or needs help. So what does that mean?

In the New Avengers series following House of M, we saw Hawkeye head to Mount Wundagore to find Wanda. Go ahead and ignore the rest of the storyline with the pair. But this might be a thread we see in the upcoming Hawkeye series. Why? At some point Kate Bishop will likely be left alone to be the hero New York needs, which would mean that Hawkeye would need a mission.

Could this lead to a much anticipated family reunion? 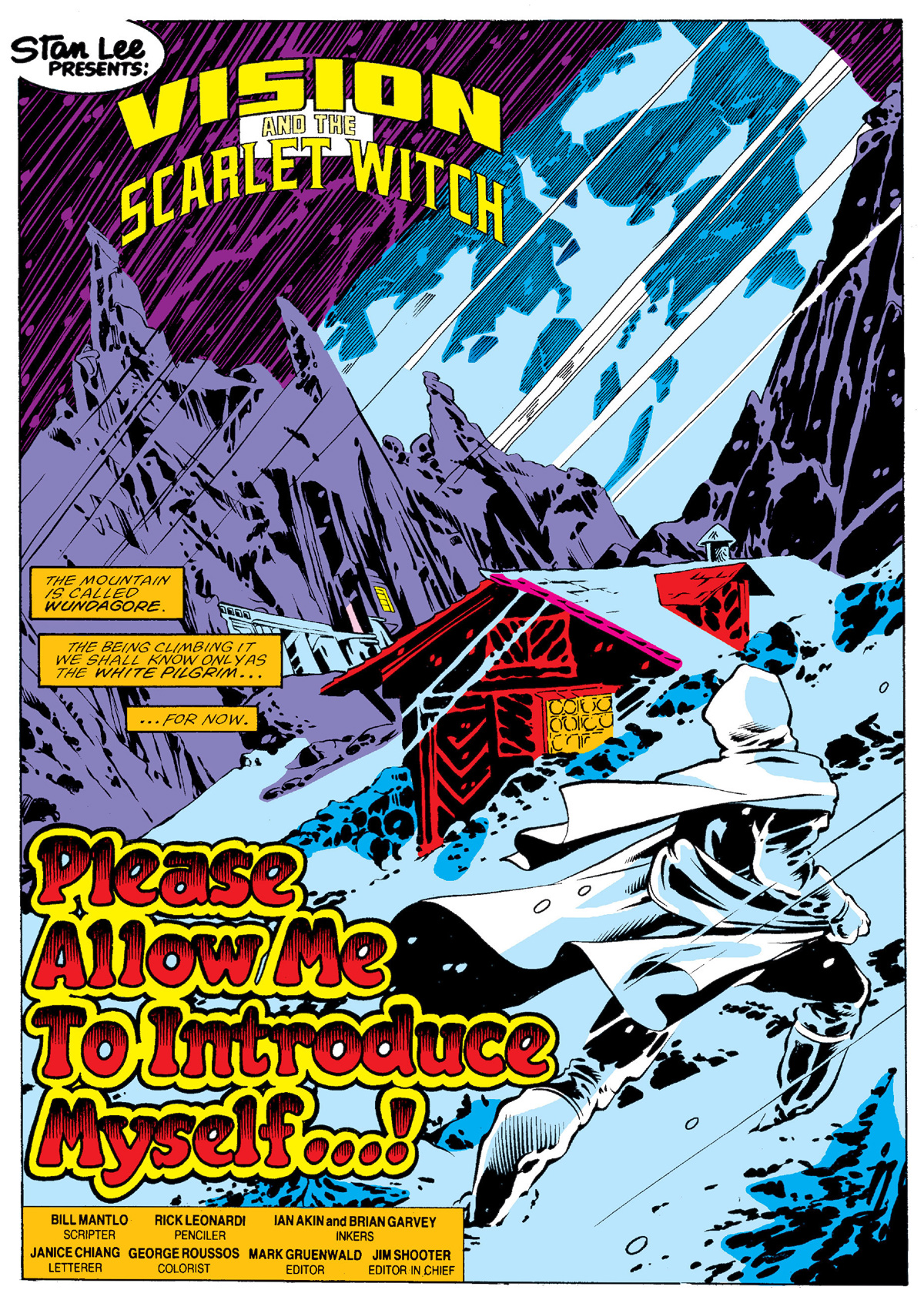 If you’re a fan who wanted to see Magneto show up, then we’ve got good news for you. In the comics, Magneto only discovers that he’s Wanda and Pietro’s father after tracing his children back to Mount Wundagore. So Wanda is in the perfect place to potentially unite with him. Speaking of uniting, when Pietro is thought to be dead in the comics, he’s actually recovering under the care of Bova in Wundagore. That could even be what happened here. We never saw him buried and geographically East Transia (the comic book location of Wundagore) seems like it would be pretty close to Sokovia.

Could Mount Wundagore become a vital part of the next phase of the MCU? 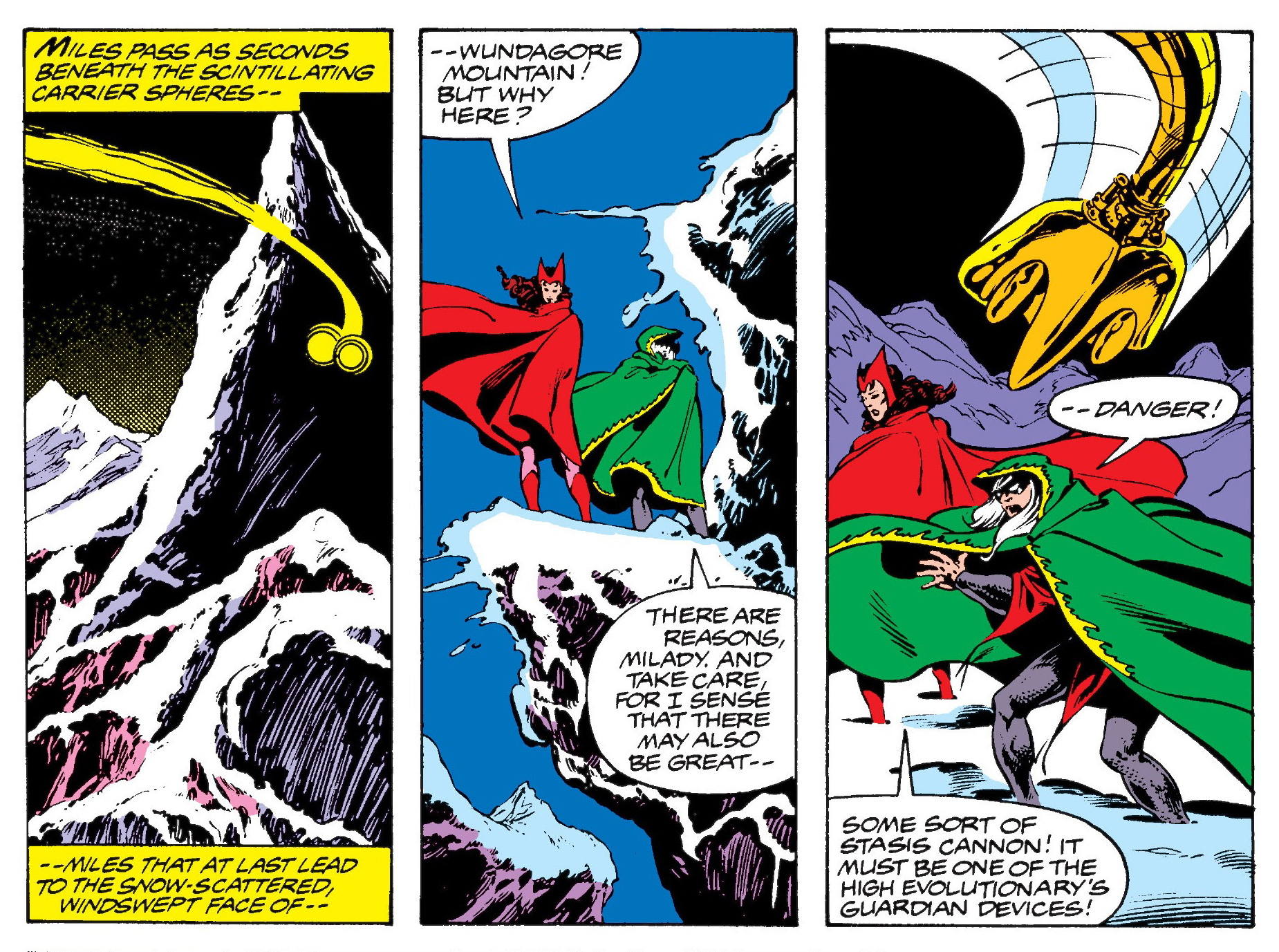 Yes. Rather than just a hideout for Wanda or neat Easter egg, we think that Mount Wundagore might become a key location for the next phase of the MCU. Historically, the location has been a sort of conjunction of both magic and science. The MCU has heavily been based in science and technology, even with the inclusion of Doctor Strange. But now Wanda has become the Scarlet Witch there is more magic than ever in the MCU. So having a space that combines both wouldn’t be surprising at all. Plus, there’s the fact that WandaVision was filled with references to Wundagore and the man that made it. The High Evolutionary.

In the comics, depending on your universe, Mount Wundagore has also played home to the X-Men. We know they’re going to be appearing in the MCU soon. Could we see them introduced here? There’s also a connection to Jessica Drew Spider-Woman. Her parents were scientists on the mountain and gave Jessica her spider-like abilities there with the aid of the High Evolutionary. Going back to Chthon quickly too, there’s the fact that allegedly he wrote the Darkhold in the caverns beneath the mountains. During the 2009 Mighty Avengers series, another magical character—Mordred the Mystic—lured Quicksilver there in an attempt to give Chthon a human vessel which we could definitely also see happen here. With a different vessel of course.

Whichever route they go, it seems like Mount Wundagore could become a Nexus point for the MCU. Beginning with Doctor Strange in the Multiverse of Madness. Between its history with super science and powerful magic—often demonic—the potential of Wundagore Mountain is just as rich and fascinating as the Scarlet Witch herself. Ah, WandaVision, thank you.