There is perhaps no conflict more powerful in Russian storytelling than the one that exists between pagan occultism and the Christian church. We see it at the heart of the overthrow and assassination of the Romanov family, when they put their faith in a mystic rather than Russian Orthodoxy. We also see it in Viy, one of the most unsettling folk horror films to come out of the USSR. Based on the novella by Nikolai Gogol, Viy consistently examines the uneasy relationship between these two traditions. At times they’re flowing together to the point where they almost become one, and at other times overtly hostile to one another. Amidst all of this is the witch, whose fierce sexuality and deep connection to a primal, ancient force will highlight the adversarial nature of these two fundamental aspects of Russian culture.

Our introduction to the Russian Orthodox Church at the beginning of Viy is, frankly, one of dissolution and sacrilege. The group of young seminarians, monks-in-training, gather outside preparing to return home for the summer holidays. A few hold a Bible up to the face of a goat, long linked to Satan in occultist imagery, pretending that it can read. The leader of the seminary chastises others for their various mischief, including dressing up as devils and stealing chickens, as well as getting the deacon of Khoros drunk. That their misdeeds are rooted in religion is significant: The monastery, and even the city in general, reflect a modern, wayward trajectory of the Church, one that will make it vulnerable to the machinations of older pagan forces. 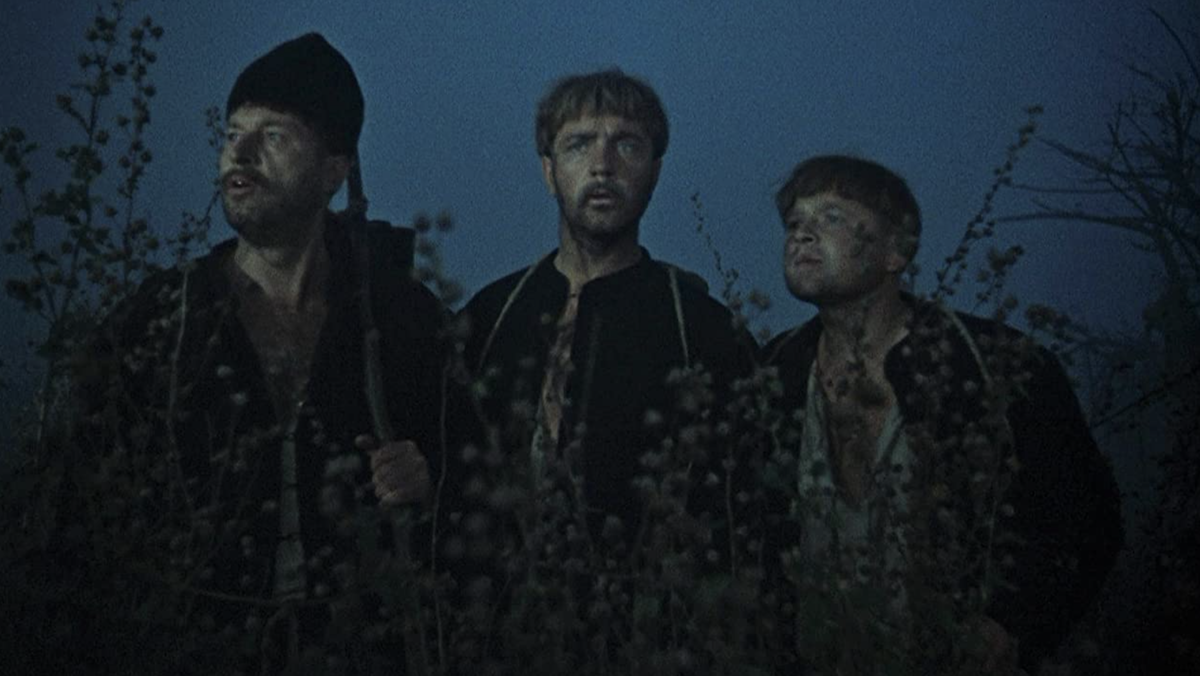 As our protagonist Khoma ventures further afield on his journey away from the city and into the wild and mystical Russian countryside, he is drawn into this conflict. While attempting to find a place to stay for the night, an outpost of civilization amidst increasingly eerie emptiness, he encounters an old woman who offers him shelter, but not without cost. She uses supernatural powers to ride him, first as though he were a horse and then later lifting him into the sky, which typifies the discomfiting nature of the relationship between these disparate forces: It is unnerving, yet tinged with eroticism, and for their participation in this depraved act, both will ultimately suffer. Horrified at his encounter with the witch, Khoma beats her nearly to death, only stopping when she transforms into a beautiful young woman.

But with her death, the battle between the two of them (and, by extension, the old world and the new world) begins in earnest. Her father summons Khoma, acting upon her request to have last rites performed on her before she dies. He doesn’t make it to her home in time. However, instead, her father commands him to pray over her corpse at the local church for the following three nights. And the witch, ever eager to take revenge upon a murderous, hypocritical priest, has no intention of making it easy for him. 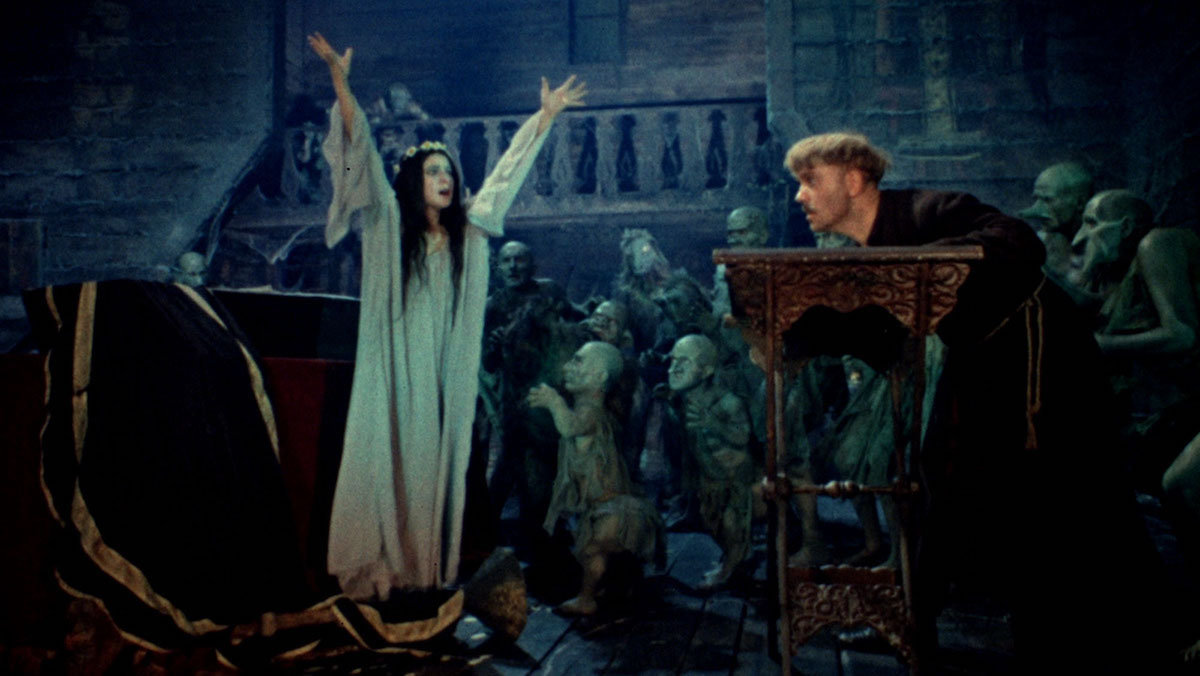 Each night, the forces of traditional religion and supernatural mysticism do battle with Khoma and the witch as their vessels. Khoma draws a protective circle in chalk around him (itself a relic of paganism) as he prays; the witch awakens, but is unable to cross the threshold. Khoma has his prayers, while the witch has her curses. She turns his hair white and temporarily causes him to lose his sight, and on the final night, she summons demons to wage war against Khoma on her behalf, including the monstrous, Golem-like “Viy”, whose strength is a worthy match for Khoma’s drunken piety.

During these sequences, we also see the connection of nature to paganism and witchcraft: When Khoma first enters the church, a horde of cats run across his feet, momentarily startling him, and later an entire swarm of birds flies from his Bible as he opens it to recite prayers. There are only church bells in his seminary’s city, an insistent auditory reminder of man’s dominance. But out in the countryside, the presence of animals is a form of expression for the ancient magic that links the earth to humankind. 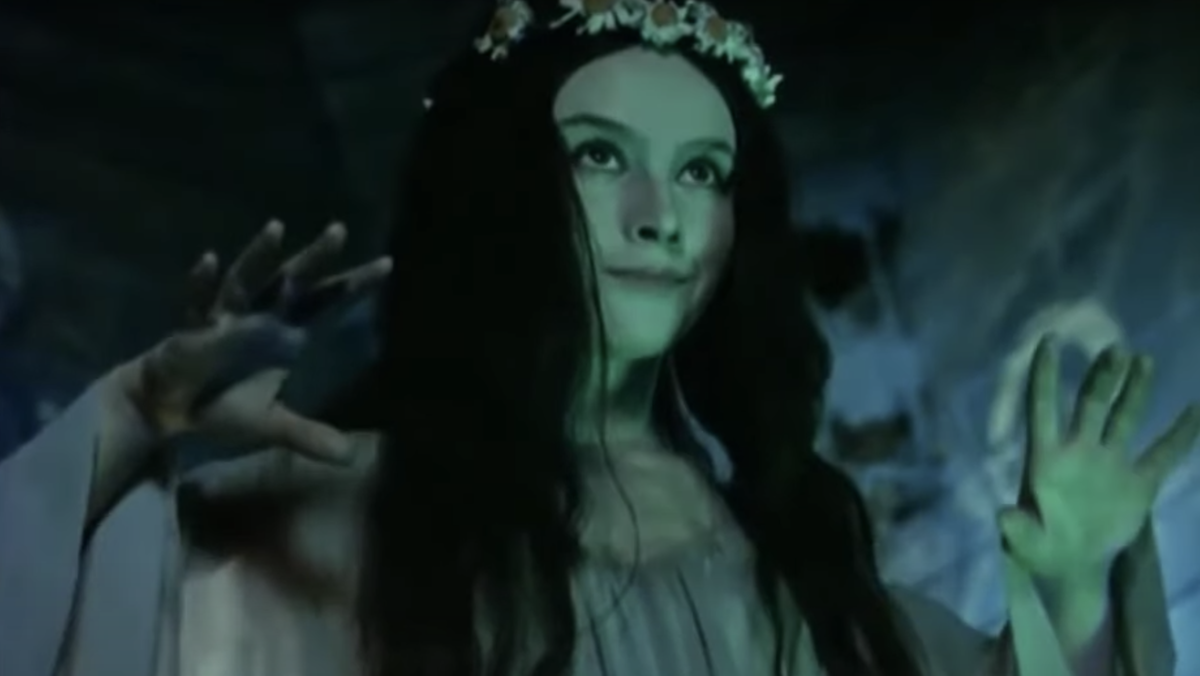 Viy is often celebrated for its inventive cinematography and special effects, made all the more impressive by the limitations of Soviet filmmaking during the 1960s. But as a work of horror, its most intriguing component is how it pits the two most important social elements of Russian culture against one another. Viy shows how even as cities emerge and the folklore of days gone by fades from memory, the remnants of that magic remain in the very soil of the countryside, and the disquieting acknowledgement of its ancient presence becomes the fundamental driver of tension in the folk horror tradition.