VILLAGE OF THE DAMNED and the Power of Scary-Ass Kids

Yes, they’re cute and precocious and everything, but that’s how they lull you into a false sense of security. I mean, kittens are adorable, but if a bunch of them decided to gang up and attack you, you’d be terrified. But children can be sinister in a way tiny animals can’t, especially British kids, and dear heavens, alien British kids with telepathic control over people might just be the scariest of all. Which is why, even 58 years later, Village of the Damned is a paranoid classic.

Village of the Damned is based on the 1957 John Wyndham novel The Midwich Cuckoos, is the rare major studio production of a British sci-fi/horror film, MGM in this case. Its inherent Britishness–the gloomy weather, the thatch-roofed little village, the droll speech–makes it all the creepier, and the premise all the more unsettling. Like the later Spanish horror film Who Can Kill a Child?, Village ponders what you’d do if your children were evil. Not just normal evil, either, but otherworldly, unstoppable evil. 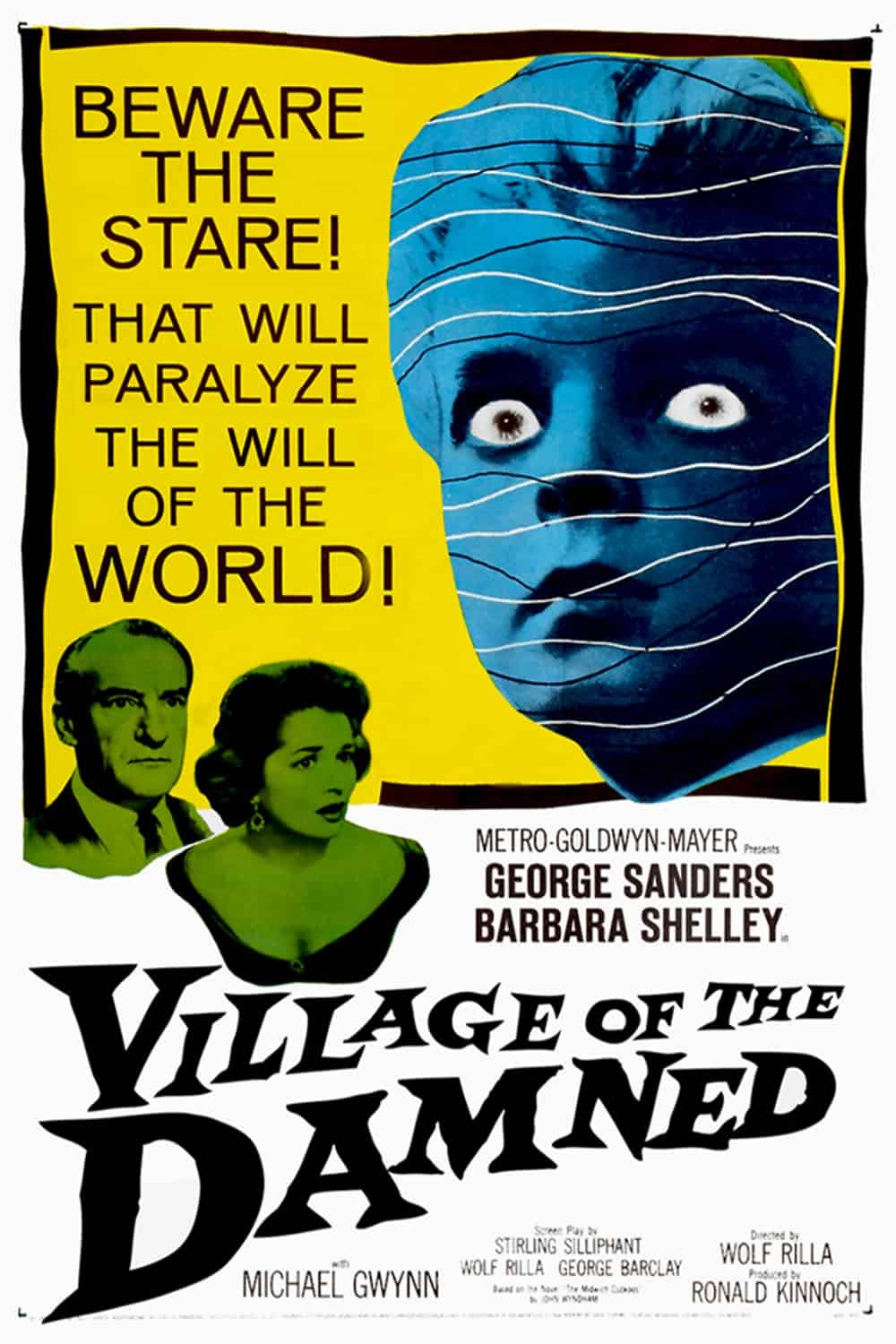 The tiny village of Midwich, UK suddenly falls under a strange power, causing every inhabitant to fall asleep. Anyone who ventures inside the parameters of the village immediately fall asleep, including military people sent in to investigate. It’s a strange plague, but one that soon lifts, causing everyone to wake up. However, miraculously(?), each and every woman of maternal age suddenly becomes pregnant, and within five months, they all give birth, on the same day.

The children all have platinum blonde hair and seem to be preternaturally intelligent but lack any and all empathy or the ability to love their parents. They can communicate with each other over great distances and have some hold over people’s actions through their terrifying stare. So, obviously there’s some bad stuff going on. Professor Gordon Zellaby (George Sanders) is part of a council that is meant to determine what exactly these children are (his own “son” David being the children’s de-facto leader) and they learn Midwich is not the only village where this phenomenon occurred; in fact there are such towns all over the world. 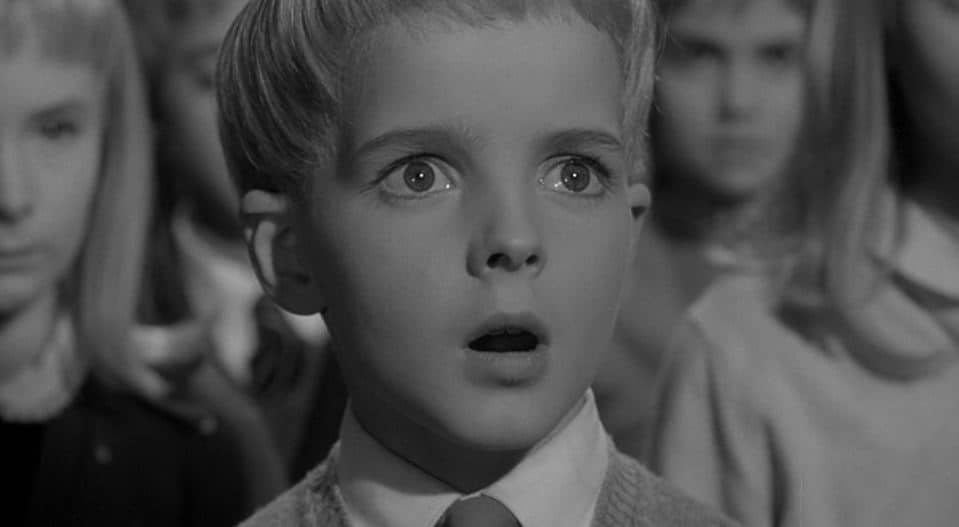 Obviously there’s some alien shiz going on, but the movie does a tremendous job of only giving us the information we need. The story is not about aliens, it’s about children who are evil and seemingly unstoppable. The film’s director, German filmmaker Wolf Rilla, went to great lengths to make the children exceedingly scary, even when they aren’t doing anything particularly threatening. The blonde hair and cold faces is one thing, but the relatively simple trick of giving them camera-negative eyes when they use their powers is incredibly effective. He also had the child actor Martin Stephens, who plays David, post-dub his own performance, making David’s speech in the movie seem all the more unnatural.

Stephens has the distinction of being the creepiest kid in two of the best British horror films of the era. The year after Village, Stephens played Miles in Jack Clayton’s excellent Gothic ghost story, The Innocents. In that film, Stephens is one of two children living in a massive manor house under the care of a governess and who seem to be somehow controlled by the spirits of the former groundskeeper and previous governess. In both films, the young actor–who was around 11 when the movies were made–conveys an air of age beyond his years. Kids seeming wise can be used for cuteness, but can also, as in the case of these movies, give off the air of menace. 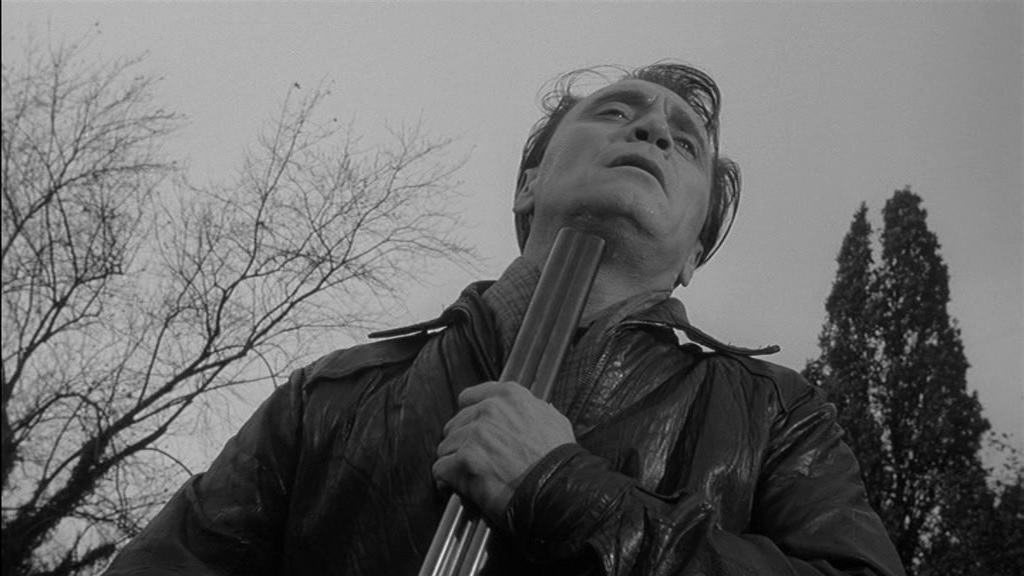 But menace is nothing without follow through. Several instances in Village of the Damned feature the children making bad things happen to people. Especially for 1960, this level of screen violence is shocking. One man is made to drive his car at full speed into a wall, causing it to explode. The man’s brother, suspecting the children were behind it (what was your first clue?!?!) approaches the group of them with a shotgun. However, they can read his thoughts, and they make the group of adults nearby freeze while forcing the man to shoot himself. It’s a harrowing moment, and the film’s centerpiece of true horror. 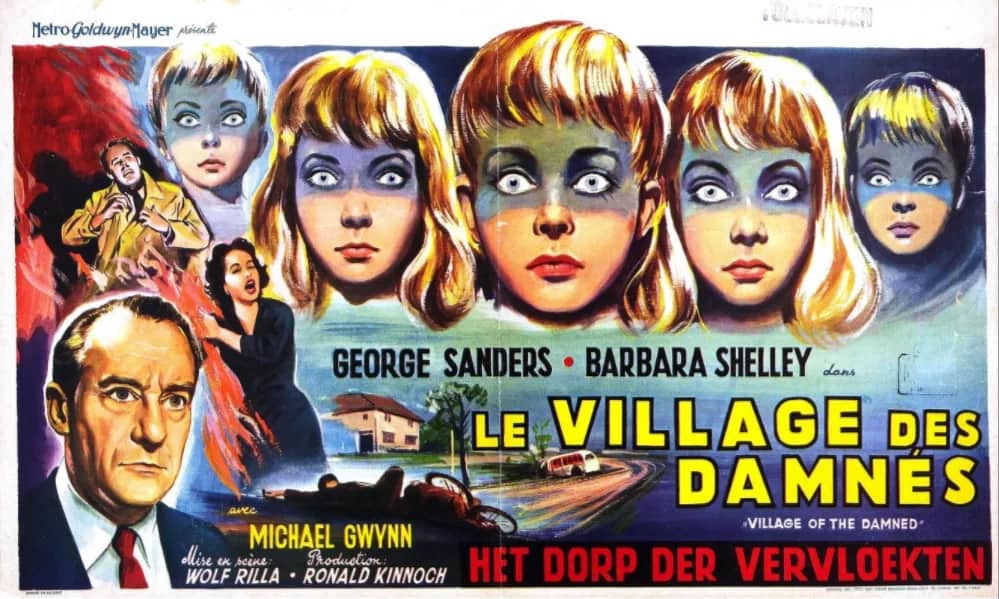 And we mustn’t discount the importance of a good score to create mood. Ron Goodwin’s compositions for Village of the Damned are somehow able to combine the typical ’50s electronic sound synonymous with science fiction with traditional sounds of Gothic horror and a bit of plinking noises traditionally used for childhood or nursery music. It’s pretty phenomenal how effective it is.

Village of the Damned is only 77 minutes long but it manages to pack in the unease and outright terror from the beginning. It’s an alien plot that feels very personal and crueler. These are people whose children turn out to not even really be theirs, but the machinations of some alien plot. It’s got a high concept but the homespun, rural realness of the fictional village of Midwich makes it feel all the more immediate. No ships hovering over massive cities, but a slow and creeping invasion, far more insidious. The closest analog I have would be the original Invasion of the Body Snatchers, but even that seems too grandiose.

Village of the Damned is out on Blu-ray now from Warner Archive.