Vikings Gone Wild is the Deckbuilder Where You Can Let Loose

Don’t worry; Joe Francis’ esteemed video series has not jumped the shark. The only people Vikings Gone Wild exploits are those coming to the table expecting this card game to be sub-par. That outcome is actually somewhat ludicrous given all the factors working against this release from the get-go. You have a video game based IP, a cheesy title, and a set of mechanisms wholly cribbed from other in-genre standouts. Surprisingly enough, this game is actually very enjoyable.

When you sit down to the table you and the bearded deckbuilder may get off on the wrong foot. Thanks to the cutesy app it’s derived from, the illustrations are a little garish and possibly a turnoff. The cards are flimsy and not quite up to par. The board that serves as a play-mat in the center of the table is quite sound and a huge boon, but it looks messy and can have new players reeling with a barrel of options.

Once you push past those initial obstacles Vikings Gone Wild meets you halfway with a round of frothy deliciousness. What you’ll notice quite quickly is that there’s not a great deal of innovation here. Rather, this design is all about combining many disparate philosophies into an amalgam that somehow works.

You have an Ascension-like row of shifting cards to buy from at the top of the board. In the middle sections, Dominion’s rocking out as you have static piles of attack, defense, and building cards. Two types of currency grease the wheels as you’re looking for beer and gold to acquire your troupe of drunken warriors. There’s even a little bit of attacking similar to Imperial Settlers, although it’s a little less restricted and not too punitive to the recipient.

Like its forebearers, each turn you work your way through a hand of cards drawn from your deck in order to make purchases and build your card engine. Most cards you acquire go to your discard pile, but buildings head to a play area in front of you conferring long-term benefits. When you attack, you can go after other players who have not been targeted yet or the occasional neutral monster that pops out on the board. The more successful attacks you can chain in a turn the more points you will score. 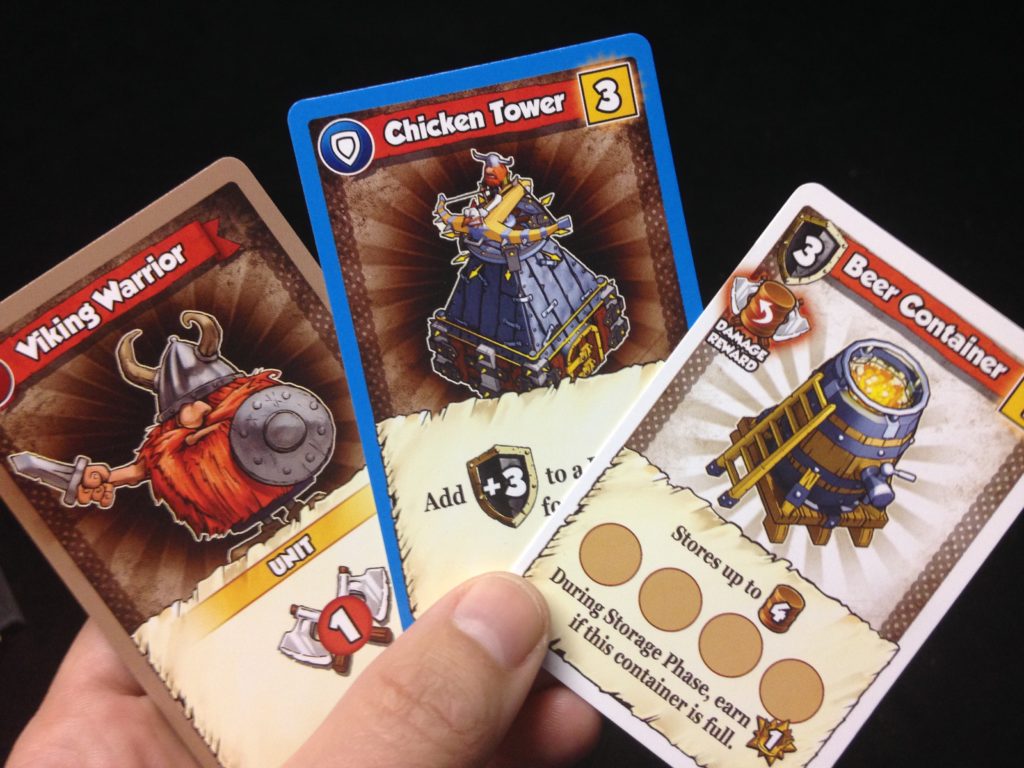 While the core of Vikings Gone Wild is dead simple–[in a bearded war-boy accent] we buy, we build, we buy again!–there really is a lot going on. There are 20 or so card options for purchase each turn, multiple attackable targets, and end game goals to keep in mind. There is a direct risk of analysis paralysis taking hold and choking the life out of the game, especially at larger player counts. Fortunately, the game’s strongest mechanism does a great deal to rein that in.

Each player has two personal goals that they can work towards each round. These are generally accomplish-able in just a couple of actions, although later stage directives can be a little more demanding. When confused or faltering, you merely need to look to your goals and follow that path. The balance here is stellar as they manage to not feel too restrictive. If you ignore your goals for a turn or two while you pick up some really powerful combos on offer, it never feels like you’ve fallen too far behind. Managing that delicate suite of choices is much of the meat of the game as it leans on that deckbuilding aspect and adds weight to the core engine building. 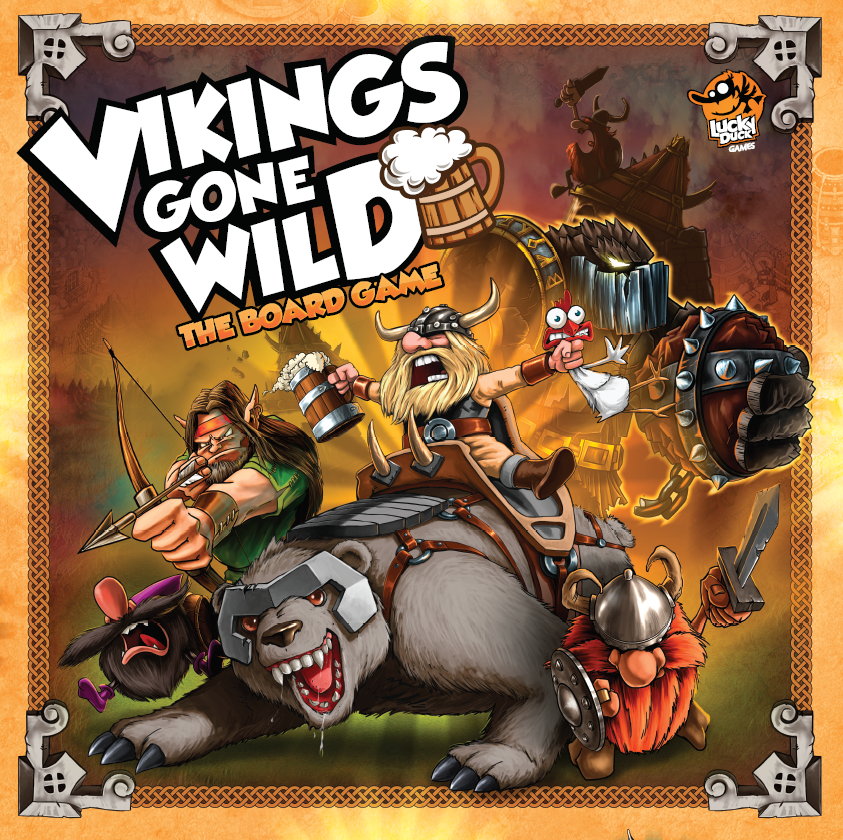 The second standout mechanism here is the conflict. I’m down with the embracing of interaction and I do appreciate that attacking some buildings steals an occasional resource. I am slightly disappointed that the majority of conflicts are pretty soft, however, inflicting no damage or repercussions to the receiver. This does confer a more friendly personality to the design and fits in with the cartoonish visual presentation, but the game could benefit from just a little more bite.

Despite that minor quibble, Vikings Gone Wild brings many gangly limbs together into a workable whole. It can feel a little chaotic and incoherent at times, but the core simplicity of the engine is so smooth that it never stumbles. While variety is an asset, it must be noted that three expansions are arriving at retail alongside the base game to mix things up. One even looks to offer a cooperative mode where you fight back an undead horde. With a bright future and a smooth delivery, you can feel secure in tearing off your clothes and living it up on this Scandinavian spring break.

Have you played the Vikings Gone Wild app or table top game? Give us a shout in the comments!