VENOM Succeeds at Being a Movie About Venom (Review) - Nerdist

VENOM Succeeds at Being a Movie About Venom (Review)

With the recent release of Insomniac Games’ Spider-Man, the nerdosphere has become re-re-re-obsessed with Peter Parker’s New York City exploits. We’ve been obsessed since 2002 when the first Spider-Man movie came out. Sure, it lulled a bit with those ironically named Amazing Spider-Man movies, but when he was granted a new life in the MCU movies, he was everyone’s son all over again. Now with the great video game, and the awesome trailer for Into the Spider-Verse, it’s all Spidey all the time. And if I wasnâ€™t already a bit worried about Sony’s Venom, I was extra worried now; could a movie about a Spider villain succeed without Spider-Man? The answer is… yeah, mostly.Sony needed Venom to do two things: to establish that, yes, it has the rights to over 800 characters in the Marvel Universe at its disposal, and to prove that it could do something with those characters without needing Tom Holland to don the red suit. If anything, Venom is more of a proof of concept, a way to show there’s legs in a franchise built around a giant, gloppy alien monster sort-of hero who needs to be warned not to bite people’s heads off. And it did that. So maybe we can forgive story, character, and pacing issues for the moment. 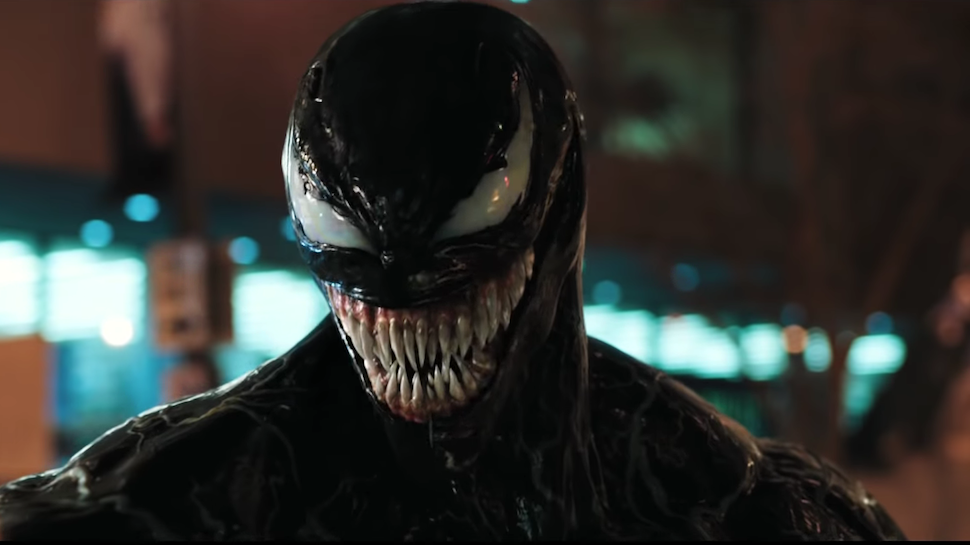 As we’ve seen from the various trailers, Venom stars Tom Hardy as Eddie Brock, an investigative reporter with a strong work ethic and the ability to take down big corporations who’ve done wrong. He’s got a good job, a romantic relationship with corporate attorney Anne Weying (Michelle Williams, cashing her paycheck as is her right!), and he lives in San Francisco, which is basically the West Coast’s New York. But it all rolls away like so many windswept turds when Eddie tries to take down wunderkind science mogul Carlton Drake (Riz Ahmed) rather than run a puff piece on him. Eddie is ruined, but he’s right.Drake is doing unethical and illegal research on some alien goo found on an interstellar recon trip, and though it bonds with humans, it usually just drains them dry and moves on to another… until it meets Eddie, of course. Eddie is the perfect host for the alien symbiote, and that turns him into a crazed, raw-meat-craving human puppet of a creature that wants to rejoin its kind. But Drake wants the alien, thugs are dispatched, and Eddie and Venom (yes, the alien’s name is just “Venom,” saving any kind of Spider tie-in) start working somewhat together to cause as much chaos as possible. And I guess save the day, too. 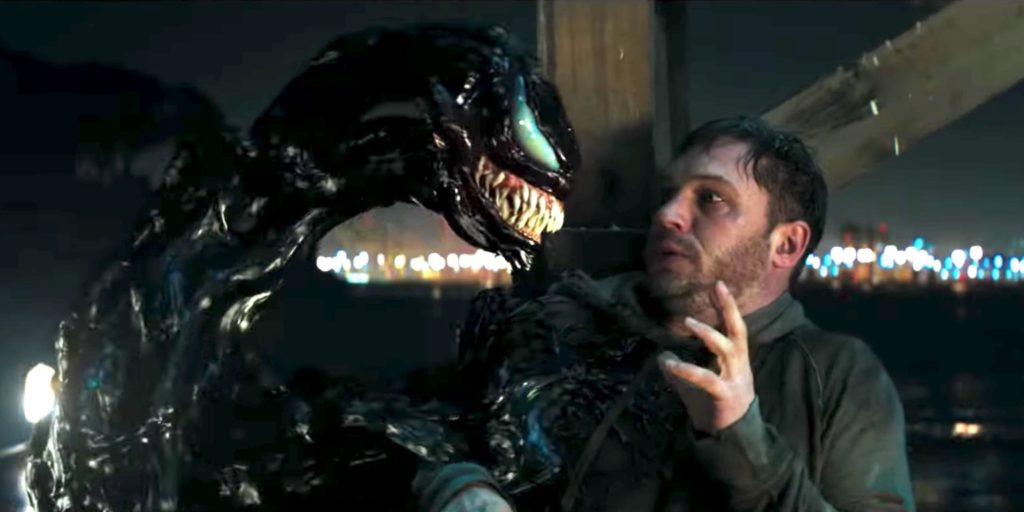 Venom is a weird beast, because on the one hand it’s a very bog standard superhero origin story (even though the movie’s tagline tells us the world has enough superheroes) and on the other it’s almost a body horror alien possession movie â€” but it never quite gets there. At times it goes for out-and-out comedy, and sometimes even nails it â€” mostly thanks to the Venom symbiote saying silly things that it somehow knows how to say (turds, wind, etc.). The first act moves pretty darn quick, the second act is almost entirely one extended chase sequence followed by exposition and another couple action sequences, and it culminates in a third act where characters suddenly soften and basically say, “Aw, hell… Â We like each other, let’s stop a bad guy.”Hardy is a particularly twitchy actor even at his most subdued, giving the audience strange facial ticks, posture, gait, and yes, accents that boggle the mind. Here, it makes a degree of sense, since he’s got an sentient alien controlling his body for a good chunk of the movie, but he’s excessively fidgety from the get-go. And yet, when the movie works, it’s when Hardy is being weird in a funny way and talking to himself. It’s odd that in the same year we got a movie where Hardy’s doppelganger, Logan Marshall Green, is controlled by an intelligence that makes him good at fighting (Upgrade, read my review of it here), we also get Hardy Prime doing basically the same thing. And both are the only reason to watch. 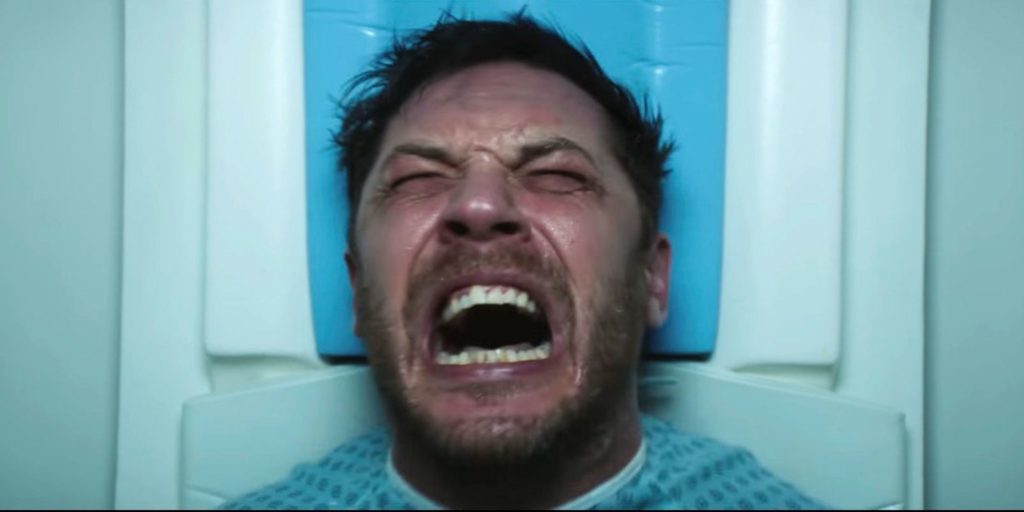 Williams is fine in a badly underwritten character. Ahmed does his damnedest to not just be a normal superhero movie bad guy and nearly succeeds. We have an utter waste of both Jenny Slate and Reid Scott, and really, thatâ€™s your whole cast. It just feels so much like a movie where all the best stuff got cut out. It was revealed this week that 30-40 minutes were removed, containing some of Hardy’s favorite bits. I would love to say it didn’t show, but character development is important and nearly everyone’s development is “and then they do this” rather than “because they do this.”But I can’t help coming back to the proof of concept idea; did Venom prove the character can stand on its own? Indeed, the movie never feels like it’s about the absence of Spider-Man, which is a minor miracle. And Venom isn’t the deepest of characters, a product of the art-heavy, story-light comics-scape of the ’90s, so why not try your hand at a solo movie? If the movie does well, there’s a built-in franchise. It gets the job done, has a couple of decent laughs, some passable action, and a fascinatingly buggy central performance. Logan it’s not, but neither is it Fant4stic. It’s a comic book movie that aims for a base hit and maybe reached base on a weird fielder’s choice. And hey, a fun animated Spider-Man movie is next up to bat…