VENOM: LET THERE BE CARNAGE Is an Absurdly Fun Film - Nerdist

VENOM: LET THERE BE CARNAGE Is an Absurdly Fun Film

I went into the first Venom without any baggage or expectations. I never read the comics, yet knew enough to know Topher Grace’s version was nothing like the character people loved. I sat down in that theater a fresh slate ready to find out why that symbiote is so popular. Then I almost walked out after 20 minutes. Few films have ever bored me quite so much. Everything flipped, though, when Eddie finally connected with Venom. And by the time Tom Hardy threw himself into a lobster tank, I was in love. I walked into Venom: Let There Be Carnage with all of that love. Along with the expectations that come with it. And what I got was a better movie that doesn’t waste time getting to the good stuff. In a fast-paced, absurdly fun film that is less a superhero entry than buddy-cop perfection. One you’ll want to see immediately for reasons we won’t spoil.

Venom: Let There Be Carnage comes in at a brisk, very tidy 90-minute runtime. Not because it doesn’t have enough story. It’s pretty easy to imagine a two hour and ten minute cut of this film. And it would be terrible. The movie director Andy Serkis actually gave us cuts out any ounce of fat that would pad Let There Be Carnage out. (A problem that plagues so many modern day big budget movies.) Less is definitely more here, as the story stays focused on its plot and its main characters, both its antiheroes—Hardy’s Eddie and the alien who inhabits his body, Venom—and its villains, Woody Harrelson’s Cletus Kasady and Naomie Harris’s Shriek.

I don’t know if I could love a pair of characters together as much as I love Eddie and Venom. Hardy is, once again, all in on Eddie. It’s easy to overlook how good he is in these films since they’re obviously bonkers. But it only works because he’s so believable having an intense argument with a voice in his head. And Venom is so consistently laugh out loud funny that my only real complaint about the film is that their vaudeville act gets interrupted by relationship problems and Harrelson’s own monster, Carnage. 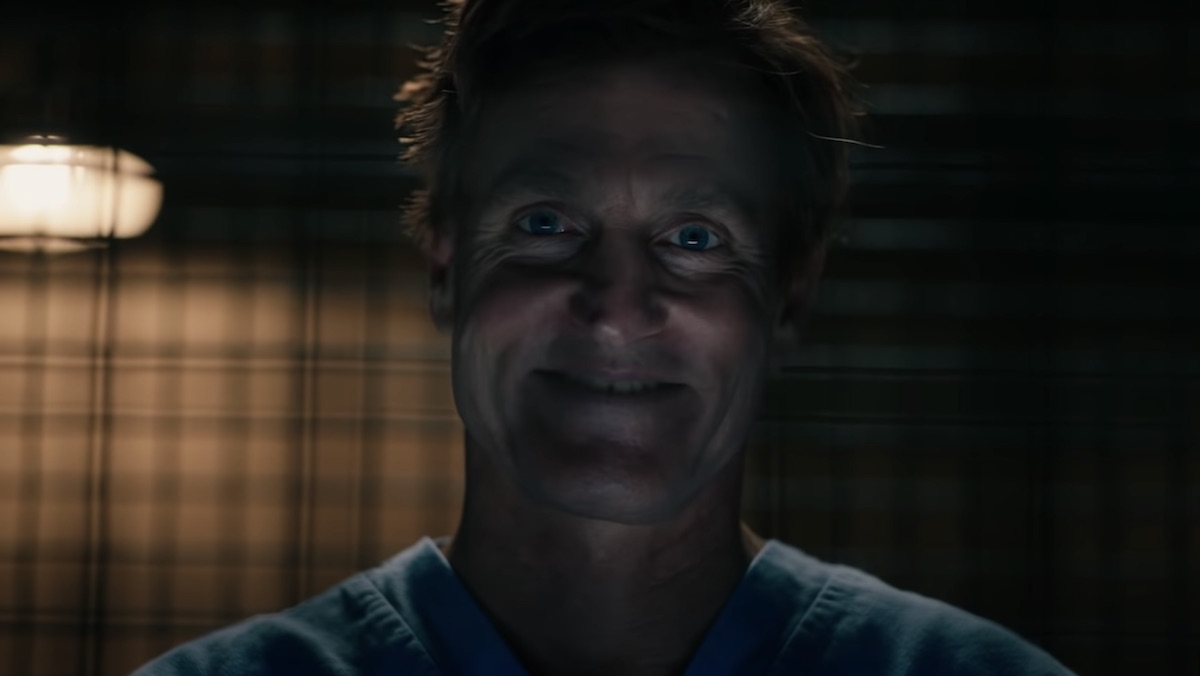 Not that Harrelson himself is a problem. Quite the opposite. His Cletus is charming, creepy, and captivating. He’s also just the right amount of cheesy to match the tone of this wonderfully ridiculous film. A tone it carries from start to finish. This is a movie that knows what it is and what it wants to do. And that’s a wildly entertaining, unpretentious popcorn film with big characters and big performances. All working towards one single goal of making its audience happy. And Harrelson absolutely gets that. He’s having a whole lot of fun, yet still giving his character the right level of humanity to not cross over into cartoon villainy. It’s a balancing act the rest of the cast pulls off too. As Twitter likes to say, everyone understands the assignment.

That includes Stephen Graham’s Detective Mulligan. He’s the most serious character in the film, but still feels like he belongs in this movie. Naomie Harris also has a blast as the super-powered Frances Barrison. She chews up scenery in a way that might be out of place in other movies, but completely matches the energy of this one. As does the returning Reid Scott. His Dr. Dan Lewis was just along for the ride in the first film. But this time he gets to do a lot more, and he nails every line and scene he gets. And Peggy Lu’s Mrs. Chen has a scene that is so funny it deserves its own special award. 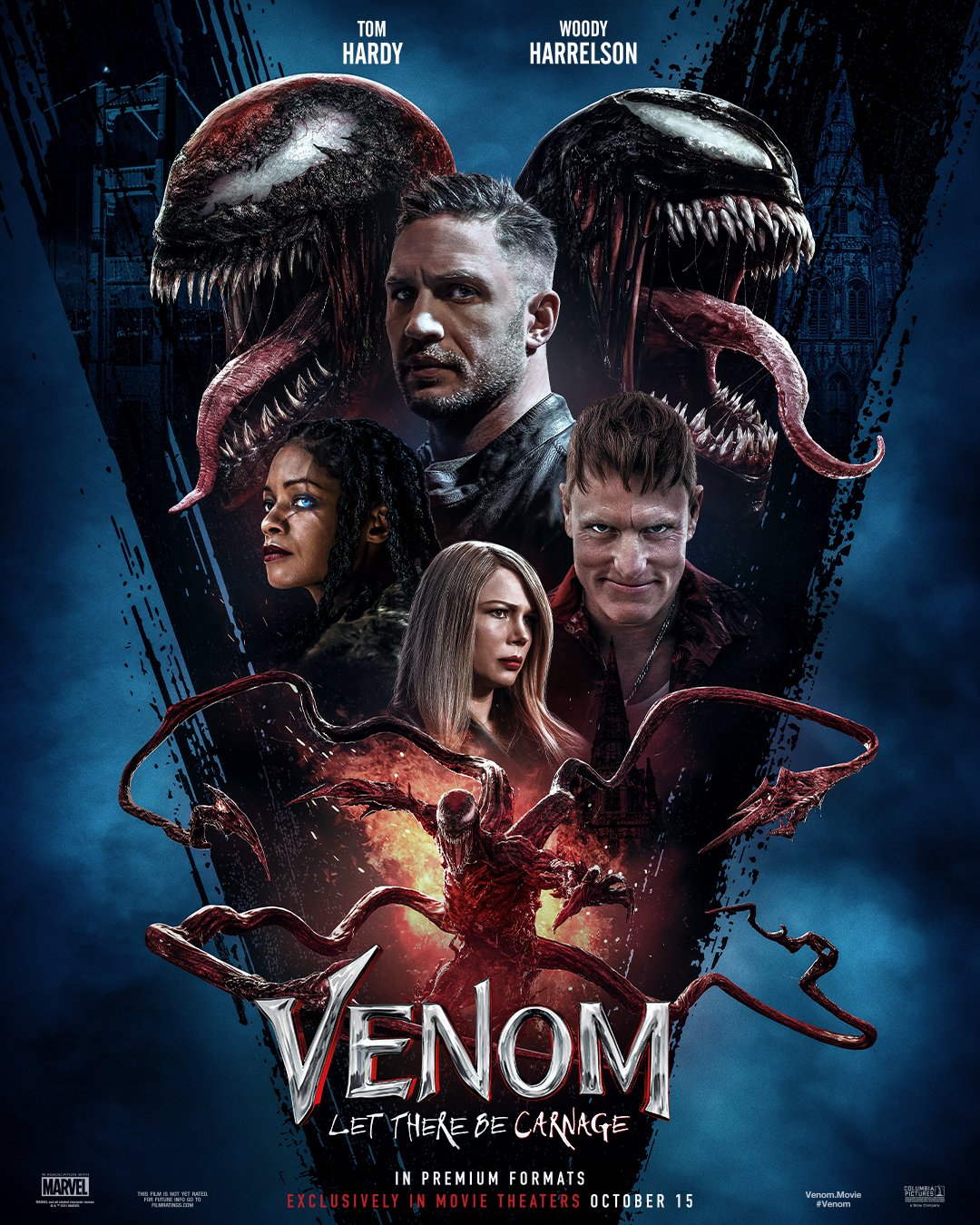 Even Michelle Williams, one of the best actresses on the planet who might as well have worn a stamp in the original film since she so obviously mailed in her performance, kills it. Forget her infamous line from the first movie. It’s as though she was sorry about her performance in Venom and wanted to make sure she enjoy the roller coaster of silliness this time around.

But at its best this is a movie about Eddie and Venom. They bicker like an old married couple who can’t quite quit each other. There’s two old partners who keep swearing this is the last case they’ll work together. All the while they’re looking out for each other no matter how much the other drives them up a wall. That dynamic is what really makes the movie work so well. A movie that is really a comedy with action scenes versus a superhero movie with comedy. In fact, the big, inevitable CGI fight that everyone knows is coming isn’t nearly as entertaining as just watching Eddie and Venom sass one another. 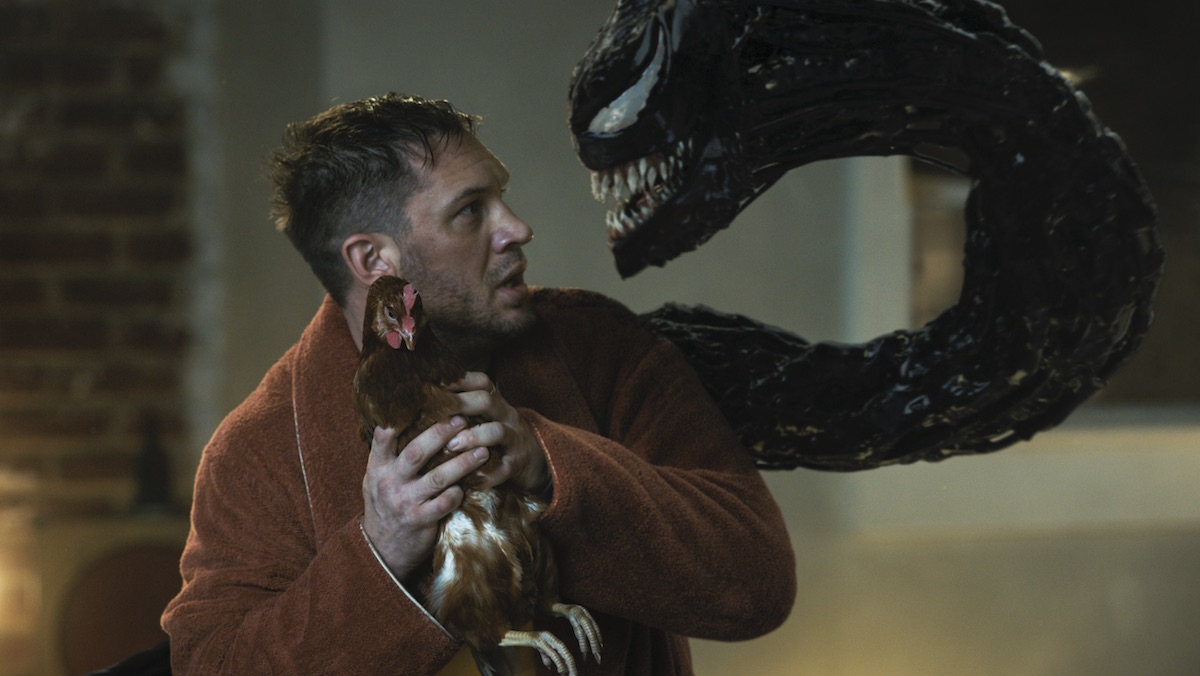 (Fortunately, the CGI looks pretty good, with Carnage being especially gnarly. Minus, however, when a black symbiote fights a dark red symbiote at night in a poorly lit locale. You can’t really see enough then to know if it looks good or bad.)

There is one memorable sequence though where Venom (and the CGI that brings him to life) gets to shine on his own. And it’s genuinely incredible. A scene that might end up being an all-time moment. It’s somehow both sincere and absolutely bonkers. You’ll be laughing and cheering at the same time, as Venom gives voice to one marginalized group of people. You’ll know which scene it is as soon as you see it starts. If Sony does want to release a two hour and ten minute cut of this film, they can just make this one sequence 40 minutes longer.

The film also does something I wish more movies would. During some needed exposition, it gives the audience something visually interesting to enjoy. Rather than just sitting there waiting for all the necessary talking to end, like someone filmed a podcast, it mixes animation with live-action. It’s a great technique that uses a perfect art style for the backstory being provided. If anything I wish the film used it a little more. 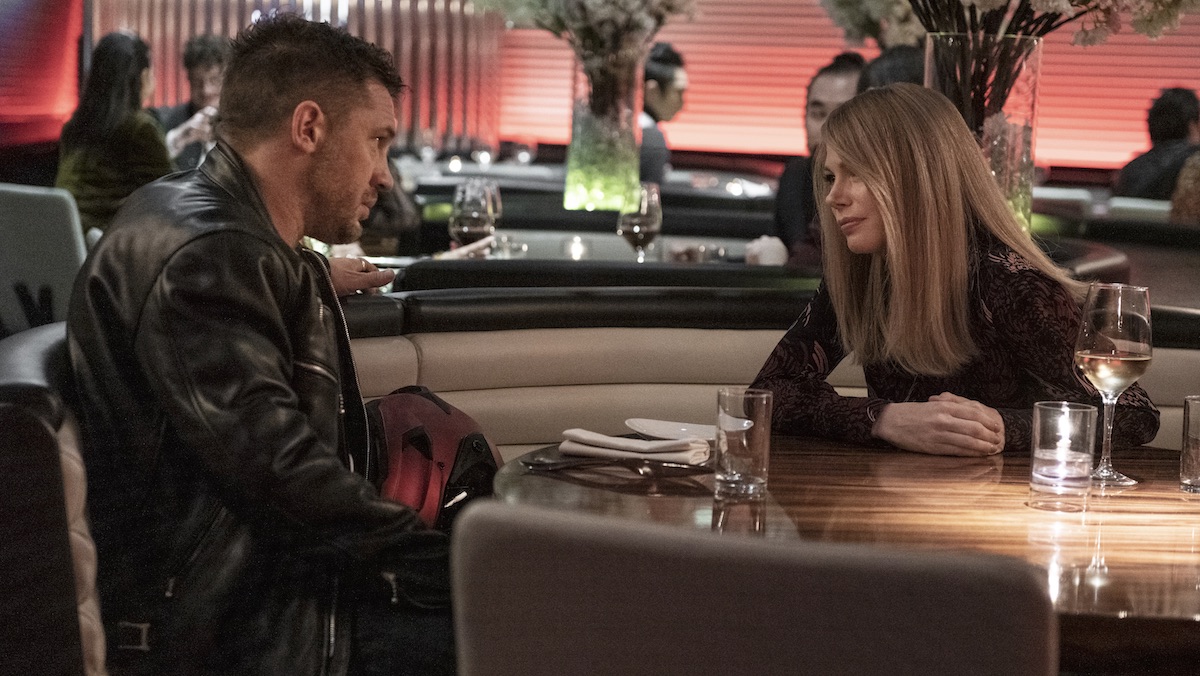 The only glaring issue with the sequel is that the film clearly wants to push as far as it can on its “PG-13” rating without getting an “R” designation. It’s easy to understand why Sony went that route. It can pull in the teenager and tween markets. But you can feel those stresses when scenes that should be bloody and gory are decidedly not. In a perfect world Venom: Let There Be Carnage would be a hard-R film. Those symbiotes, even the hilariously polite one, are big scary monsters who want to eat people. Letting us see their feedings would add to the movie’s over-the-top tone. Denying us that when it clearly doesn’t want to detracts from it a little.

Considering we don’t live in a perfect world, though, that’s a pretty minor complaint for a film that is this entertaining. (And one with a post-credits scene that is going to be a major, major thing we would hate to spoil for anyone.) It might not be the right movie for people who continued hating the original after the first 20 or 30 minutes. But for people who loved Venom at its best, Let There Be Carnage is even better than the first. Not just because it has a better villain and better minor characters. And not because, unlike so many movies, it knows exactly what it is and what it wants to do at all times. But because it doesn’t have any of the boring stuff from the first film. It only has the good parts, especially Eddie and Venom.

Venom: Let There Be Carnage comes to theaters October 1.