Vanish and Die in the Jungle with the Lost Expedition - Nerdist

Vanish and Die in the Jungle with the Lost Expedition

Legendary explorer Percy Fawcett has re-entered the limelight after disappearing in the Amazon over 100 years ago. Featured in books and film, his bold journey into the wicked jungle to discover the lost city of El Dorado can now be reenacted on your table top. The Lost Expedition is a dish that layers beautiful eye candy on top of mounds of unbridled brutality. It’s easy to lap up, even when it’s stabbing you in the pink tender parts of your mouth and wreaking havoc.

This is an adventure game mechanically focused around resource management. You take a team of three specialized explorers along with a supply of ammo and food. You will want to guard these poor souls and their meager supplies with your life, as they are not long for this world. The game will do its best to infect, burn, and claw each last sliver from your plate.

That difficulty and the constant barrage of challenging decisions is what propels this simple adventure card game into a journey worth repeating, again and again. The Lost Expedition serves primarily as a solo game which means this quality of adversity is a necessity to spark the development of skill. You can embark on the sojourn cooperatively as well, and it’s fulfilling in that regard, but the quality of play isn’t necessarily higher or more interesting than going it alone. 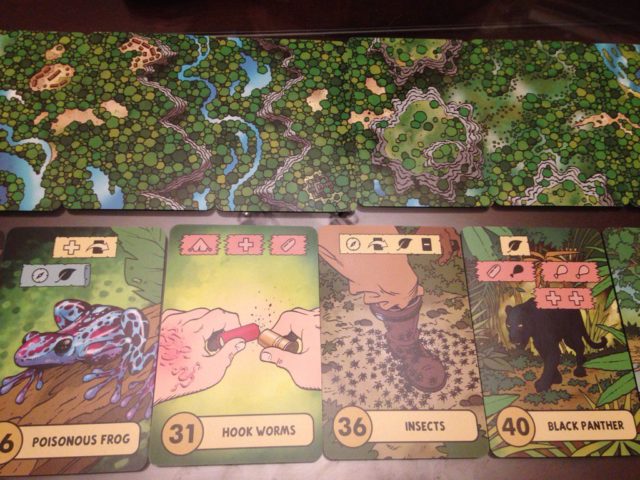 To make it to El Dorado you need to traverse a pathway of cards that taunt you at the top of the play area. These form a track that simply measures distance, but the benefit of utilizing large over-sized cards means the exceptional illustrations can be showcased to add a touch of atmosphere.

The round to round minutiae of the harrowing walk consists of laying out adventure cards from a separate deck. These are the lifeblood of the game and form the central challenges you overcome. They consist of a large narrative portrait along with mandatory resource expenditures and forced decisions.

So you’re trucking along and you hit a huge anaconda, or maybe you contract some deadly illness, maybe you even have the dreaded hook worms crawling around in your limbs-oh god, not the hook worms. The card will force you to perhaps lose a food, then choose between sacrificing two health or losing a bullet and an additional food. A single unit of food is consumed at the end of each round and is a necessity to, well, survive. Life’s tough and The Lost Expedition rides that into the ground like a drunk clown atop a hungry Velociraptor.

Depth extends as some cards you are allowed to keep that correspond to the skills possessed by your crew. This represents the gaining of knowledge, equipment, or aid. Later encounters may require you discard one of those cards or lose health from the character that possesses the same skill. Did I mention your people will die? Probably swiftly. Lots of dying really. 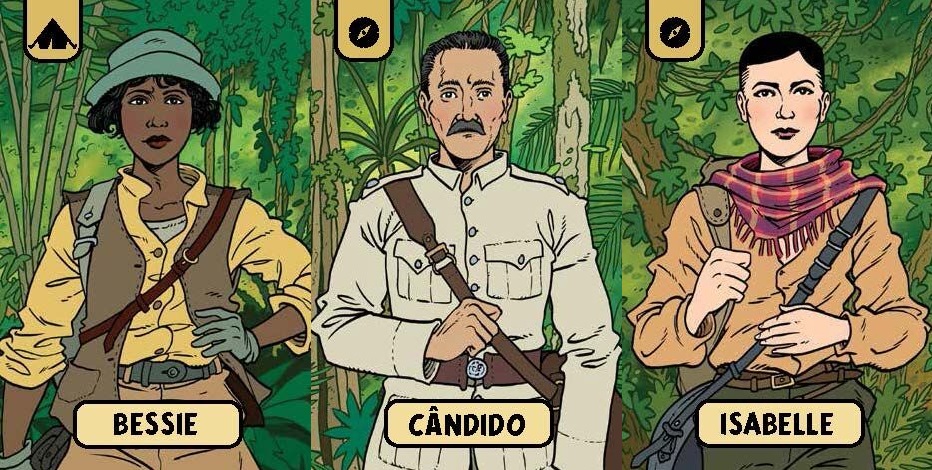 Occasionally cards will offer you the ability to travel, usually for a severe cost. This is how you move your little camper meeple along the path to El Dorado. I recommend yodeling and pretending like you’re the little dude hiking up the mountain on the Price is Right. It will add a punch of comedy to your eventual demise.

The real grit and meat of the game is clinging to your health and sanity long enough to hit these travel icons. When you have to pass one up you’ll curse loudly. When you run through a series of six adventure cards and don’t hit a single symbol of forward momentum-you’ll bear down and grind your teeth.

With the core of the design being a series of difficult choices, you’ll cling to any sense of control you can muster. Luckily, the game presents a puzzle each turn in how you lay the encounters out. The order you hit the adventure cards is of pretty large importance. If you’re lucky, you may gain a resource or two before you’re required to spend it. Some effects will even let you skip encounters later in the order. There’s a definite sense of strategy sown in deep contemplation. You’ll argue with yourself over whether you should place the spider monkey at the beginning or end of the stack. It’s all humorous and giggle worthy if you’re sitting across the room, but in the moment you’re in the throes of anguish and trying to wield the fire in your gut. 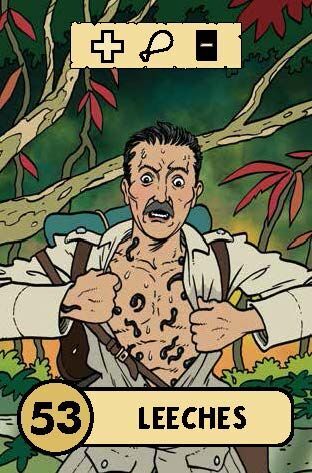 While The Lost Expedition is definitely not a story game it certainly contains a semblance of narrative. The events you encounter and the results imparted offer a sense of context to the proceedings. You’ll spend bullets to claim food as you blow away the alligator. Maybe you’ll trade some resources to the Natives and they will help you book safe passage down the river. These elements are easy to ignore as there is no text at all, but they’re sitting in front of you waiting to be teased out. Over and over it’s clear the game was in fact designed with the theme and setting in mind.

The Lost Expedition will hit the table most often as a solo challenge, but it’s worth taking stock in the enticing competitive option. This does not feel tacked on as it’s a full-fledged strategic bout. Players build two separate paths of challenges without certainty in which they’ll face. There are tactical considerations and details explicit to this mode which makes it a worthwhile endeavor. You do lose a little bit of the exploratory atmosphere as the focus shifts to outwitting an opponent, but that also helps differentiate the feel of the two styles of play.

As a whole, The Lost Expedition is one of Osprey Games’ stronger titles. It blends compelling challenge with beautiful components and a satisfactory narrative. It’s one that’s easy to pull off the shelf and fully engage. How often can you contract hook worms and fill your boot with nasty insects while sitting in the comfort of a beaten up leather sofa?

Any interest in Percy Fawcett or The Lost Expedition? Let us know in the comments below!