The Secrets Of Clan Malkavian In VAMPIRE: THE MASQUERADE - Nerdist

The Secrets Of Clan Malkavian In VAMPIRE: THE MASQUERADE

X, played by Xander Jeanneret, represents Clan Malkavian in L.A. By Night. The Clan of prophets, seers, and madmen doesn’t have any secrets; simply nobody listens to them. Few Clans can claim to have been so reviled and hated that they’ve had almost every other Clan seek their eradication at one point or another in history. Mental Illness (of any kind) has always been difficult for society-at-large to understand, and Clan Malkavian suffers from it as an immortal curse. With no structured Clan organization and no driving purpose, let’s dive into this clan and uncover how they survive and their real purpose… 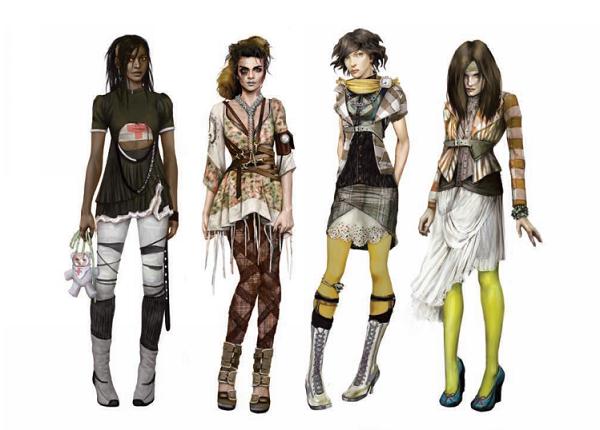 Unlike other clans, whose founders and ancient vampires are all sleeping or dead, Clan Malkavian carries an amazing secret within each and every member: Malkav himself. In the early days, among the ancient city of Enoch, Malkav was one of three vampires with the same sire. He and his companions would each rise to become seen as City-Gods in their own way, each with a gift of a special sight. Malkav and his children had the gift of foresight and prophecy; Salout has the gift of wisdom and internal harmony, and Set had knowledge of the spirit world around them. When a vampire revolution happened, each of them found themselves on the run or perished; of course, Malkav saw this coming (who guessed that right?).

When he was vanquished, Malkav spread himself among the blood that he gave to his Childer, and like the master Vampires of legend, he lives on within each of them. All of Clan Malkavian is connected through a madness network that gives them bits of prophecy. A Malkavian in L.A. might be brushing his cute little fangs in the mirror one night and suddenly get an image of another Malkavian in Paris getting violently murdered. Of course, when the Malkavian with clean teeth tries to tell anyone about this, they think he’s nuts—particularly if this happened in the dark ages. In modern nights, Malkavian’s tend to keep this knowledge about their clan founder, and their erratic and uncontrolled connection to each other tight-lipped, as far too many Malkavian’s were burned at the stake for “Hysteria” by fearful Vampires and humans.

For centuries Clan Malkavian had a Discipline called Dementation. This power allowed them to infect others with their insanity. When other clans descended upon them in the Dark Ages, Clan Malkavian used this weapon to cause insanity in Kindred courts. With their gift, they could make even the staunchest Prince fearful of the shadows or see enemies in old allies. While this saved the Clan during the Dark Ages, eventually the clan realized that this gift would be their undoing against the growing legions of Cainites. The Elders of the clan came up with a masterful plan:

They erased their own Clan Discipline.

Without telling anyone (including most of their clan), the entire clan suddenly lost the gift of Dementation and had it replaced with Dominate. No longer could the clan infect people with their insanity, and now they could simply control the minds of mortals. Malkavian courtiers ran to the courts and told everyone; “Look guys! We aren’t insane anymore!” (or something like that). This saved the clan for a few hundred years until 1998—when they just decided it was time to have the power of Dementation back. In V5, for an unknown reason, the Clan has again gone back to Dominate proving that nobody can really know what the heck is up with Malkavians on any day of the week at this point. 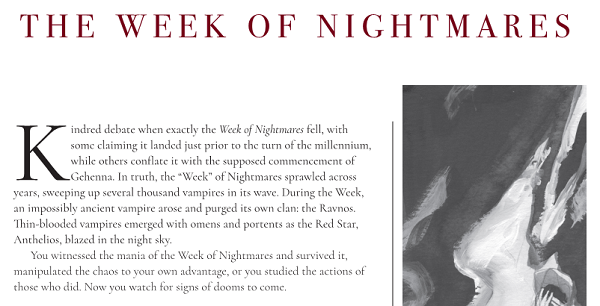 In V5, Clan Malkavian is represented among the Lore Sheets by the Descendants of Vasantasena on page 399. Based off weakening the Blood Bond or deprogramming sect brainwashing it’s a good Lore-Sheet. There are other great character options for them beyond their clan specific one. The Week Of Nightmares was meant to be the great apocalyptic event of Vampire and end the game line, instead, The Red Star that became the Harbinger of Gehenna came.. and vanished—but in old lore, Malkavian’s saw it all.

Taking this Lore Sheet is a perfect backdrop for any Malkavian in V5, as it grants you the oral history of the Week of Nightmares. Allowing you to spout end-time prophecies or spin your own tales (and have people believe them). As you advance in the Lore, you uncover secrets about the Red Star still being visible to yourself and others like you. Lastly, master this Lore Sheet and gain access to a most powerful object: The Blood of Zapathasura. An ancient Antedulivian founder of the Ravnos Clan, illusionists and wanders, it was killed during the Week of Nightmares which happened around 1998 and you are in possession of his blood. What you do with this blood, however, is up to you and the Storyteller…