Should V FOR VENDETTA Be HBO's WATCHMEN Follow-up? - Nerdist

Should V FOR VENDETTA Be HBO’s WATCHMEN Follow-up?

For better or worse, HBO seems like it won’t pursue a second season of Watchmen. Recently, series creator Damon Lindelof confirmed that Watchmen was a “one and done” season, at least for him. Meanwhile, HBO has gone on record saying they are reluctant to do another season without him. So should the network look to another great work of Alan Moore’s from the ‘80s for inspiration for a successor series? I speak now of V for Vendetta, the celebrated ten-part comic book series created by Moore and artist David Lloyd.

Similarly to Watchmen, V for Vendetta has already been adapted before. A film version was made in 2006 by director James McTiegue and the Wachowskis as producers, though that film deviated in many ways from the source material. Meanwhile, the Watchmen movie (mostly) stuck very close to the source material, in a way that some found off-putting. While the TV version of Watchmen did the opposite of the movie, creating a new story based on the events of the original, maybe V for Vendetta should take a totally different approach. Do a far more “to-the-letter” style adaptation of the original work. This could be the key to success for this property in live-action. 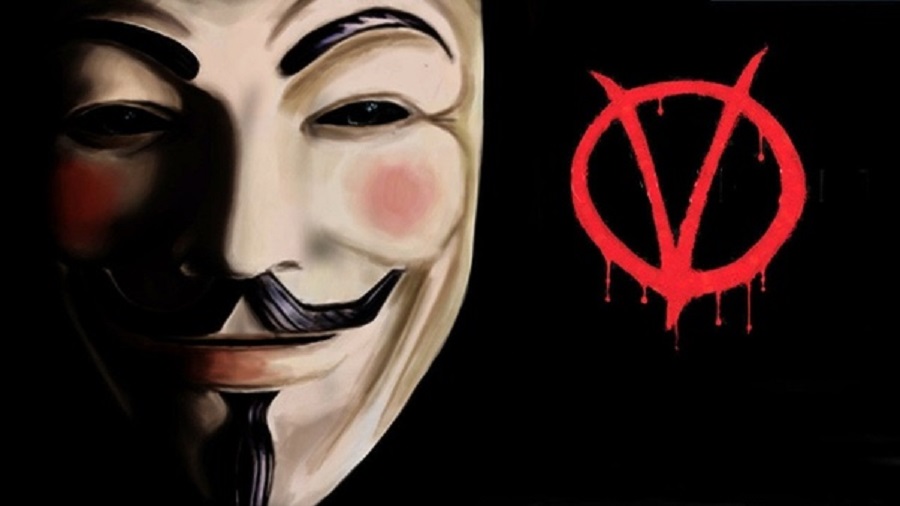 V for Vendetta began publication in the UK in 1982 before moving over to DC Comics/Vertigo just a few years later. It takes place in a dystopian future, said to be the year 1997. In this post-apocalyptic version of the UK, the country survived a war that ravaged the rest of the globe. In the midst of all this chaos, a white supremacist, fascist, and religiously fundamentalist government takes over the country, and has exterminated all opponents of its regime by placing them in concentration camps. England is effectively a police state. 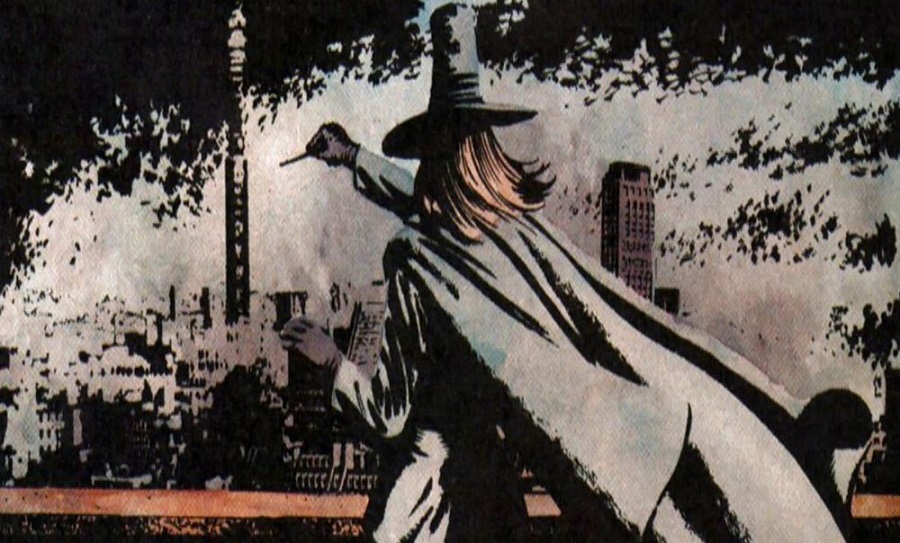 Into this political landscape, the mysterious figure known as V emerges. An anarchist disguised in a Guy Fawkes mask, V begins a revolutionary movement to inspire the residents England to embrace anarchy over fascism, and to get revenge on those who wronged him. Written in the midst of Margaret Thatcher’s term as Prime Minister, the entire story was a clear political allegory, and it reflects our current era just as much.

Because of this, a lot of fans might bristle at the thought of another V for Vendetta adaptation, especially as the movie version turned off many fans of the comic. But remember, when a Watchmen television series was announced, most fans had a “how DARE they” stance, since the original is maybe the most celebrated work of comic book fiction maybe ever. Besides, it had already been made back in 2009 as a film. But Lindelof’s Watchmen won over even the most skeptical fan. 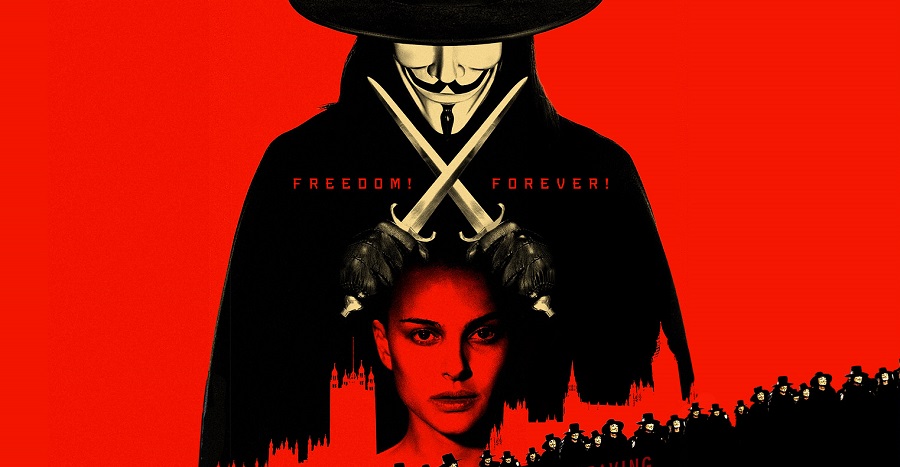 In the comic, the titular “V” takes rescues a young woman named Evy from being assaulted, and then over the course of the series she becomes his protégé. But the key difference is that, in the novel, she’s a working class Londoner who is forced into prostitution. In the movie, Natalie Portman’s version of the character comes from a more privileged background. It’s exactly the kind of choice a Hollywood studio would make to ensure the main character was “palatable” to their target audience. But it turns her into a very different character from her original portrayal. In addition, there are many more characters in the original graphic novel, while the movie focuses on a smaller cast.

The book also goes out of its way to portray everyone in it at least somewhat sympathetically, even some of those on the fascist side of the equation. In the film, the government fascists are almost all over-the-top in their rhetoric, and came off as a bit ridiculous and without layers when it was first released. Mind you, the film came out in 2006, within a couple of years of when Howard Dean’s chances for the Democratic nomination were totally shattered one night when he yelled too loudly in public. In 2020 (ironically, the year the movie is set) those larger-than-life government fascists seem somewhat less ridiculous. 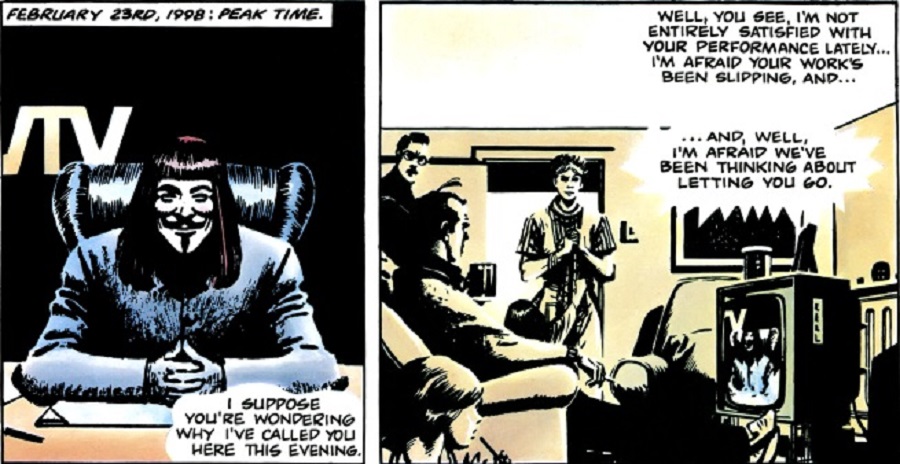 Basically, the movie changed a lot of things from the graphic novel, and it left out a lot of the nuance of the original as well. And the action and violence were dialed up way more, probably at studio request. So maybe television is where a proper version of V for Vendetta should really play out, without making any of the compromises that the movie did to hit a wider demographic. And without getting too political, it is far timelier now than it even was in a post-Iraq War America. All of these things that they removed from the comic for the movie version are the exact things that would make a television version that much more compelling. 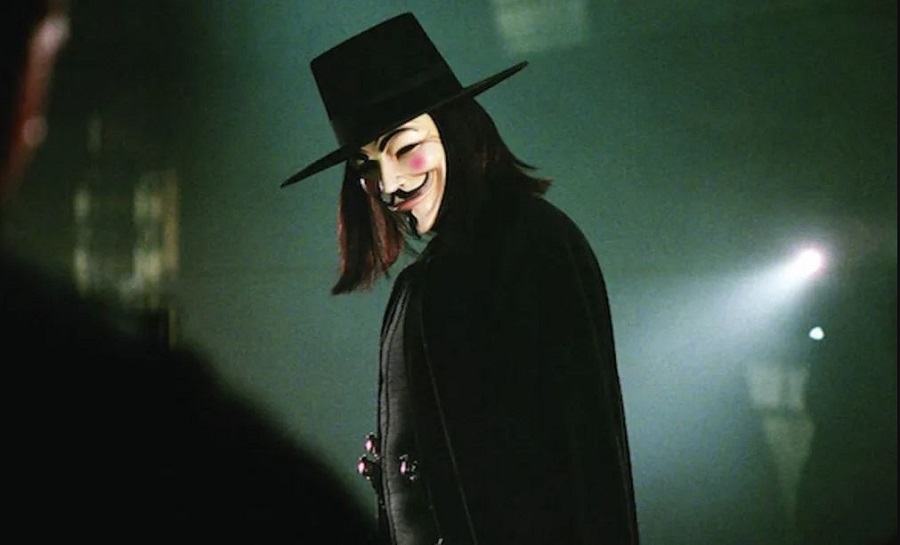 Now, there’s no way Alan Moore will ever be happy about this. Nor will he ever watch it. For that reason alone, many fans will bristle at a V for Vendetta series of any kind. And I get why. But Warner Bros. own this property, so sooner or later, someone is going to adapt it again. If that’s the case, why not make it the best version it can be, and make it big budget HBO series? And maybe it would ease all of our collective Watchmen withdrawal … if only a little bit.