This is a spoiler-light review of Utopia Falls season one.

Hulu’s upcoming series Utopia Falls is a sci-fi drama with a lot going on. The core of its premise is what you’d expect from a coming-of-age story; an eclectic group of kids rebels against strict societal rules, each of them discovering their own destiny in the process. Utopia Falls takes place hundreds of years in our future in New Babyl, an Earth city completely enclosed by a protective shield following a devastating conflict.

Similar to Divergent and Hunger Games, New Babyl is divided into different factions from which the main players originate. At first glance, it seems like an idyllic future with diverse residents who all serve a specific purpose, positive rehabilitation for those who break the law, and a “community first” concept in what is supposed to be a post-racial society.

Of course, this is soon dismantled to reveal a hyper-controlling governing body with its share of prejudice, racism, inequality, and general messiness. It’s the way of humans, even in a dystopian society where there’s a chance to build a better foundation. The only perfect and peaceful world is one where we don’t exist. This revelation isn’t shocking but instead disheartening considering New Babyl’s founder. 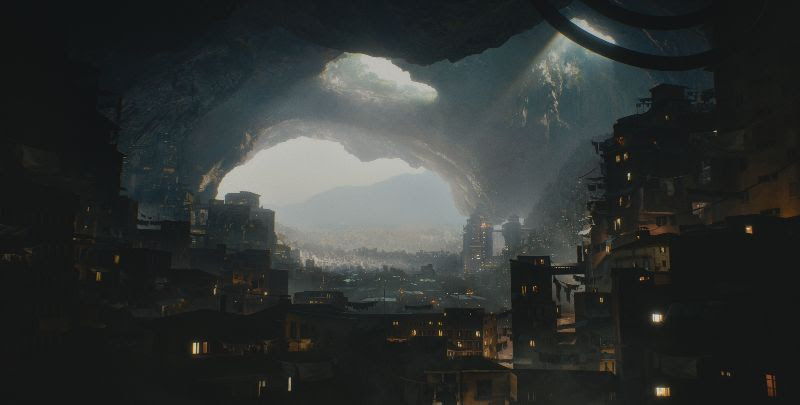 The protagonist group, specifically its privileged lead Aliyah (Robyn Alomar), and teens from other sectors are chosen for Exemplar, a performing arts competition to foster pride for New Babyl. A competition with a winner is an odd concept for a place that discourages emphasis on the individual, but let’s go with it.

She meets Bohdi (Akiel Julien), a young man from the city’s lower-class Reform sector, and they soon find a mysterious secret place called The Archive: a high-tech time capsule of music, most notably hip-hop, history, and relics from Earth’s past that are completely new to their generation. (The Archive is voiced by none other than Snoop Dogg.)

Yes, you read that right. This is a future without one of the world’s most dominant and influential genres of music. The discovery sparks creativity and makes them question everything they have been taught and push back against New Babyl’s groupthink standard.

The series doesn’t provide clarity on how, why, or when certain genres of music were eliminated from New Babyl’s culture, especially when the lines between them often blend together in real life. Certain songs like Bill Withers’ “Ain’t No Sunshine” are present, albeit in a different form, so it’s not necessarily an elimination of music by marginalized creators, but presumably a whitewashing of their content. The extent of what the New Babyls know about the past themselves is equally vague, which may be addressed in the latter of half of the season but should have been clear upfront. 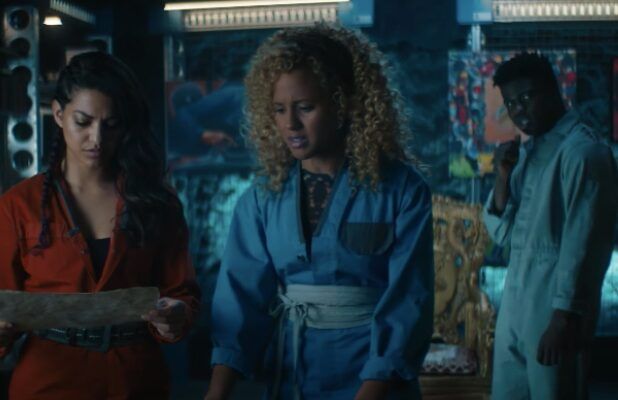 Throughout the season, the main story arcs include: the pressures of keeping this relic a secret among Aliyah and Bohdi’s Exemplar inner circle; Aliyah uncovering things about her family and city; the group’s usage of what they have learned during performances to incite change; Bohdi’s treatment; and the growing tensions between the powers in charge and residents.

So basically, it’s a musical sci-fi dystopian mystery/drama where kids try to dismantle a system through creative dance. It is both unlike anything on TV and exactly like a lot of what fans have seen before in terms of typical genre tropes. Utopia Falls does deliver some intriguing commentary and story threads, but they frequently get lost in melodramatic romantic tension, moments that are supposed to be profound but come across as corny, and a dance competition that is bleh at best.

The general rationale behind the Exemplar competition makes sense. It was a way to bring kids together who wouldn’t have met otherwise and give them a platform for all of New Babyl. But in the grand scheme of this series’ developments, it simply isn’t that interesting, even with influences from the past.

What’s going on with Aliyah’s family? Is their life beyond the shield? Who built the archive and why? Those are the questions going through fans minds as they wait for performances that are straight out of Honey 2 or Save the Last Dance to end. 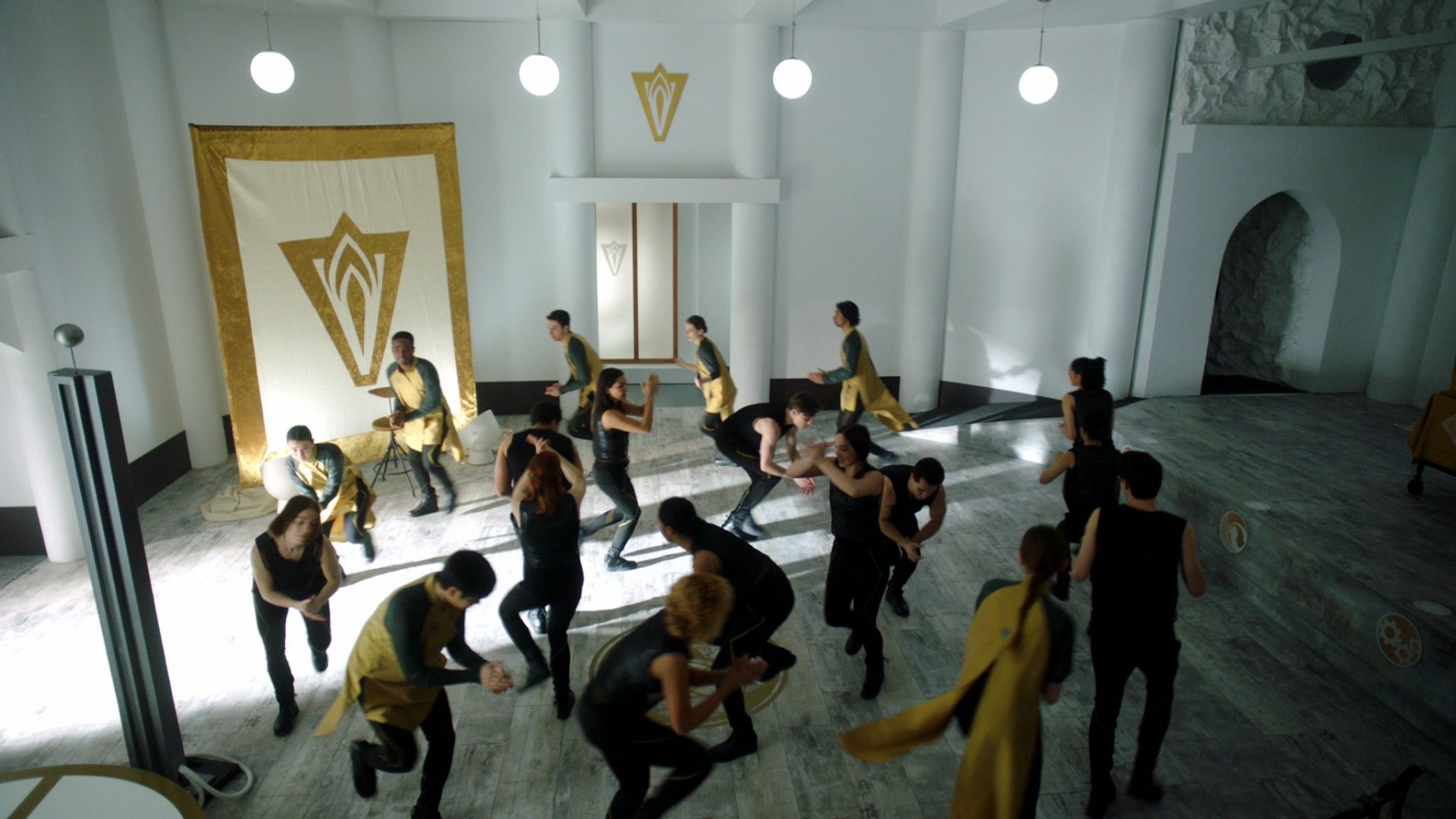 Utopia Falls is a teen show, so the sketchy decisions, annoying confrontations, loose lips, and general nonsense between the characters are par for the course. The characters all get some level of development but, save for Bohdi and Aliyah, they feel mostly like one-dimensional players making random moves that do nothing to move any story forward.

There are certainly some positive aspects of Utopia Falls. It features a mix of music from around the world and knowledge about hip-hop spanning from DJ Kool Herc to Megan Thee Stallion and affirms that the genre is a powerful force built on expression, storytelling, and trendsetting. There have always been people who want to blame societal unrest on rap, control its packaging, or downplay its merits as a legitimate art form. It is, after all, a form of music where the marginalized community who created are still in the majority. Adversity aside, rap continues to evolve and be the voice of rebellion and telling one’s truth, which is explored in this show.

Bodhi is the secondary protagonist but by far has the strongest character arc. His interactions with other characters (particularly the formidable antagonistic leader Phydra (Kate Drummond), backstory, and connection to and understanding of hip-hop comes across with the most authenticity out of this group. 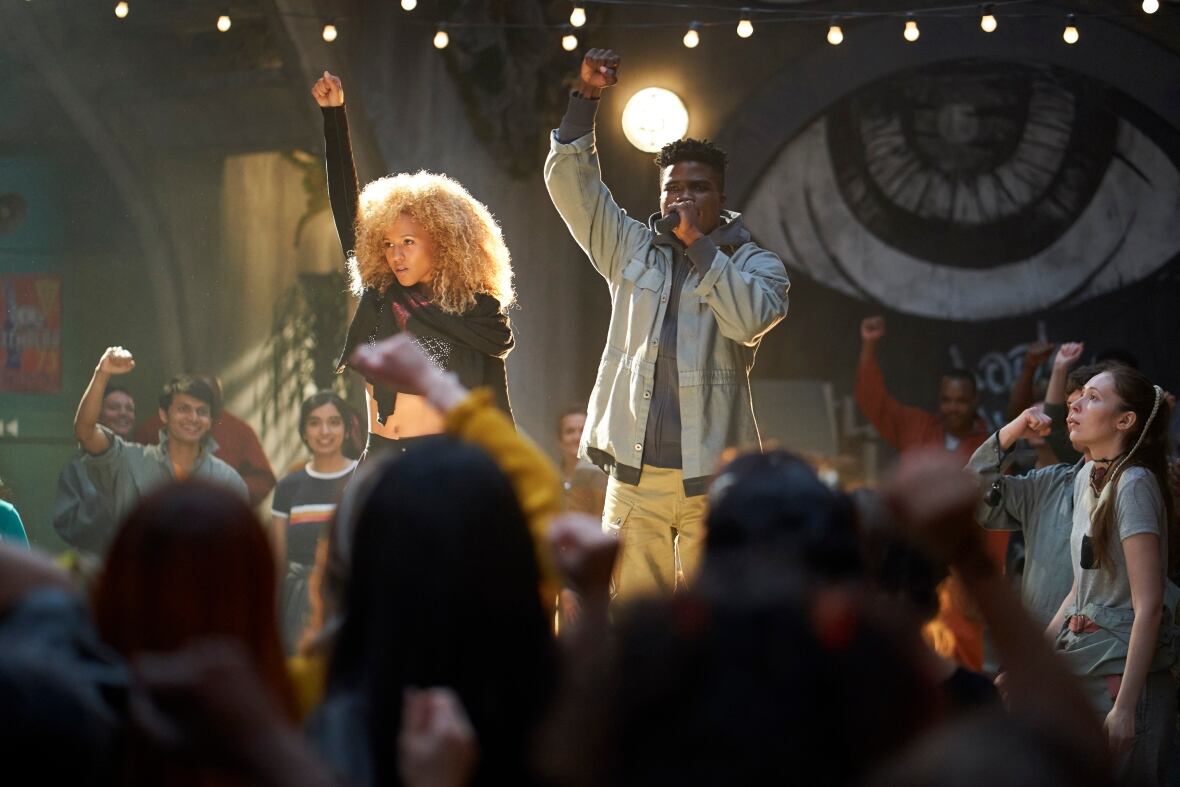 The story really leans into Bohdi to unveil deeper truths about New Babyl’s fallible structure, the world outside the dome, and the actual revolution that doesn’t involve busting a dance move. This character’s relationship with The Archive is the best union in the series, and should have had a greater focus. If you’re looking for a reason to watch the series, Bohdi is the reason.

The revelations at the end of season one are kind of anticlimatic because most observant viewers will put the pieces together quickly. The series does deliver a big plot twist that no one saw coming, but it doesn’t make the expected impact on the story. The series certainly sets itself up for a second season with much more to explore in these kids’ futures.

Utopia Falls is odd enough to bring in some curious viewers and has enough breadcrumbs to perhaps make them want to see this journey through, even though the road has a lot of murky area before the finish line.