There’s a danger that threatens to destroy the world, and it was foretold in the pages of a comic book. While that sounds like something that might happen in 2020, it’s actually the premise of Utopia: the new conspiracy thriller series coming to Amazon. Inspired by the 2013 British series of the same name, this version of Utopia, led by Gone Girl and Sharp Objects writer Gillian Flynn, has been updated to reflect the current state of the world. Still, it retains what made its UK predecessor so unique: a healthy dose of dark comedy, stories about friendship and identity, and an underlying lesson of finding your place in the world.

Last fall, Nerdist joined a group of journalists on a set visit to Chicago, where an abandoned hotel on the outskirts of the Windy City had been transformed into a bustling, vibrant comic convention called “Fringe Con.” Here, Utopia‘s main characters—Ian (Dan Byrd), Becky (Ashleigh LaThrop), Samantha (Jessica Rothe) and Wilson Wilson (Desmon Borges)—are brought together by their obsession with the fictional comic book. It’s the “calm before the storm,” as over the course of eight episodes, these nerds find themselves embroiled in a conspiracy that means life or death for them…and for the world.

When we had our own meetings with some members of the cast, they were more than eager to discuss their roles and tease some storylines. 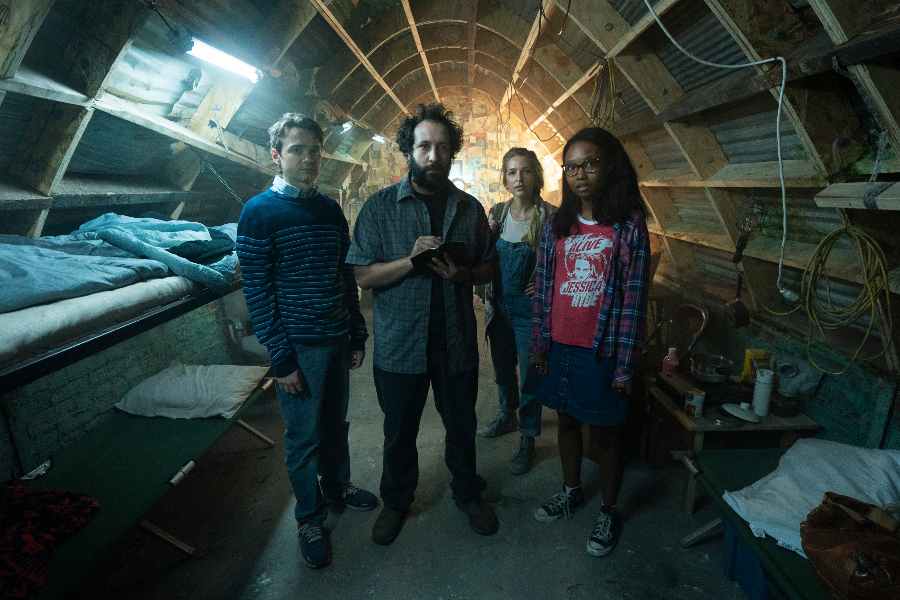 Jessica Hyde might be one of the most interesting characters in Utopia. While she’s the protagonist of the in-universe comic book, she’s also a real person—and someone who might hold the key to Utopia‘s secrets. Sasha Lane describes her character as “an animalistic feral cat,” but that doesn’t mean she’s all steel. In the UK version of the show, Jessica is more hardened. In the U.S. version, Lane wanted Jessica to have more layers. “We can have her be badass and cold-hearted, but I think there’s something else to being cold,” she told Nerdist. “I think to be cold that means that there’s something that’s burning there … Basically, there’s a reason why this person is always in attack mode, always paranoid, always kind of fancy. I just wanted to show more that there’s an underlining to her versus just a hard exterior which is the boots and the jacket. I wanted to relay that there is a reason why this person is behaving this way.”

That reason has something to do with Utopia. Jessica’s dad has been missing for years, and she sees the comic book as more or less her purpose—part of the reason she joins up with the show’s protagonists, as they’ll need her help to crack Utopia‘s secrets. “To her, Utopia [is] going to give her…some type of idea of why she is doing what she’s doing,” said Lane. “She’s looking for her dad, basically. So she’s like, well, maybe this is what’s gonna get you the answers to that.”

According to Ashleigh LaThrop, Becky is “really sweet and kindhearted, and really believes in Utopia because she’s living with a debilitating illness.” That illness, which LaThrop likens to “late stage Parkinson’s,” is what primarily drives her to become invested in finding the graphic novel, as she believes it holds the cure for her otherwise incurable disease. And although she’s classified among the group of “nerds” who obsess over Utopia, she’s not the nerd you’d expect. “My character in particular is not really someone who is a fan of anything but Utopia,” shared LaThrop. “She’s not someone who likes superhero things or comics at all. It’s specifically this one aspect that she is interested in.”

Becky is a people pleaser, which LaThrop teases is not always a positive thing when it comes to the group’s mission. (So look out for that to come into play down the line.) “Because she’s such a people pleaser, she’s just terrified of Jessica Hyde,” LaThrop said, referring to the group’s dynamic with the comic book’s protagonist. “So I think for a lot of it, it’s more like not showing my true feelings and just trying very hard to be friends. And wanting to all get along, regardless of how I might actually feel.” 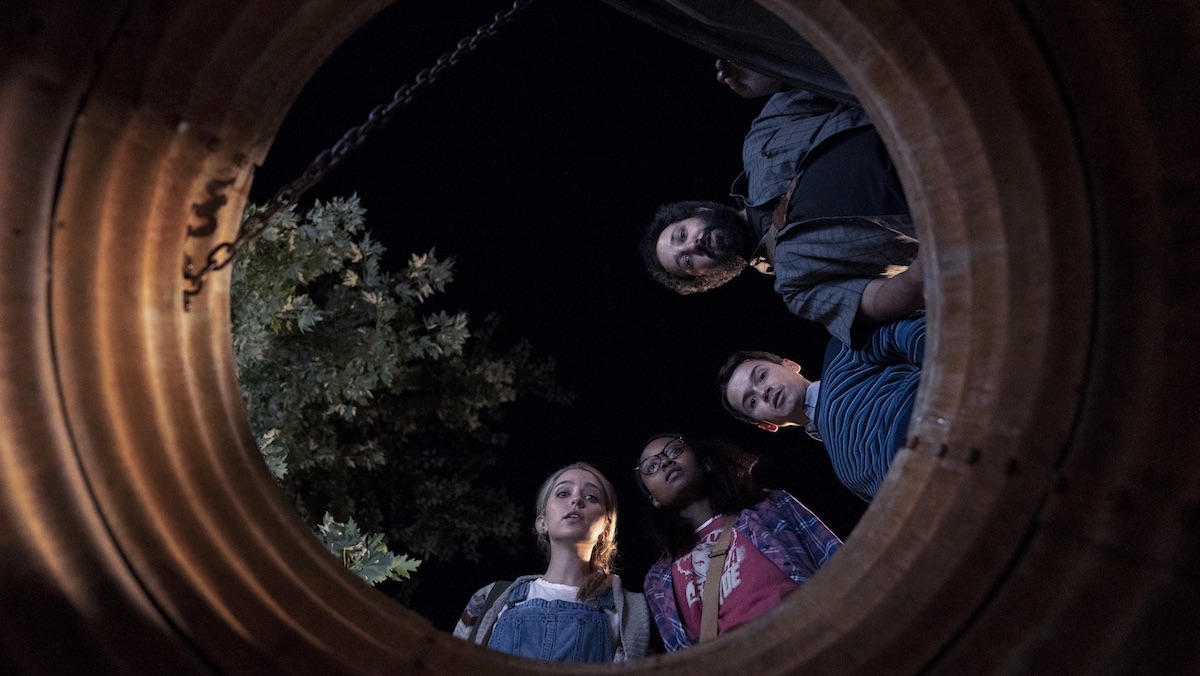 Whereas Becky is obsessed with Utopia, it’s the exact opposite for Dan Byrd’s Ian, who is “a little bit of an outlier in the group.” Part of the reason Ian isn’t so wrapped up in Utopia‘s lore (at least, not at first) is because he hasn’t come to the con specifically to chase down the comic book. While he’s a nerd who is interested in the graphic novel, he’s primarily at the con to meet Becky, whom he’s formed a connection with online. But, as Byrd teases, he eventually gets drawn into the conspiracy. “They’re sort of immediately thrust into a very extreme circumstance,” he told Nerdist.

“And also, in that circumstance, they’re sort of not left with much of a choice but to carry on. So it is kind of one of those tales that they’re finding out what they’re capable of as the story goes along, and the boundaries keep getting pushed further and further and getting more and more extreme. They’re introverted, nerdy people that sit and make friends on the Internet. And all of a sudden, it’s like, the Internet isn’t even a part of their lives anymore. They’re just there in the real world for the most extreme reality you can pretty much imagine.”

The Office‘s Rainn Wilson plays Michael Stearns, a virologist who, before the start of the story, discovers a peculiar virus called Stearns virus. And yes, there’s a reason the virus is named after him. Stearns helps work on the virus but is unaware of its true purpose, which leads him to join up with the group in an attempt to make things right (and save the world). “He starts a little smaller, a little more as a sporting character, and kind of grows with every episode and takes an incredible journey,” Wilson said. “It’s an amazing hero’s journey that he undergoes, from basement-dwelling nerdy mushroomy scientist in an university lab to, you know, an incredible hero who’s thrust onto the world stage with these mysterious diseases and biotech stuff that is happening throughout the course of the story.”

While Wilson admitted his character isn’t intentionally inspired by anyone, he did call out Greta Thunberg and Bill Nye as character inspirations. “When I was growing up in Seattle, Bill Nye was doing little comedy sketches with static electricity and animal balloons on the public access station,” said Wilson. “And now he’s a spokesperson for climate and science and science in schools, STEM education. So, you know, small people can go a long way and make a big impact.” 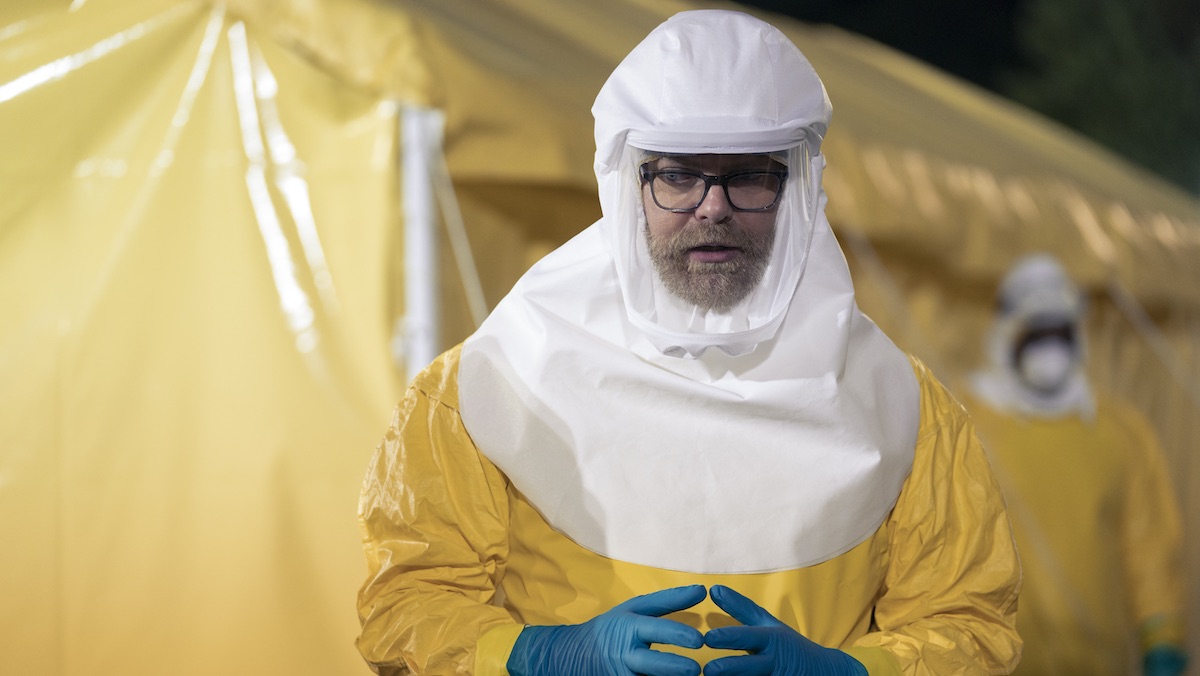 At the time of our set visit, the world was in pre-pandemic mode…which meant that it was impossible to know how relevant Utopia would become by the time it premiered. If nothing else, that does heighten the stakes of this story about a world where the evil isn’t an alien or a supernatural being but rather our own government.

“I think it deals with a lot of real world issues right now that we are facing politically—climate climate, vaccinations, overpopulation, vaccinations…everything that they’re saving the world from, it’s not a bad guy living in space,” Byrd explained. “It’s like real world issues that are being perpetuated and accelerated by bad guys. And those are the people that they’re trying to uncover.”

Utopia premieres on Amazon on September 25.