A game whose title wants to write its own pun is a boon to a reviewer, but I’m not going to fall into that trap. Instead, let’s talk about tile laying games and how enjoyable they are. They’re simple as you physically build a map or strategic picture and observe as a thing organically grows through play. The post-apocalypse is equally enjoyable, at least from our comfortable distance. You get to tear up a lawless world and fight insane creatures born of nightmare. The thought to combine the two seems foreign and nonsensical. Unknown, against all odds, makes it work.

This is a cooperative survival horror game of exploration and resource management. You choose one of 10 scenarios and deal out random characters to each player. The setting is the near future with survivors emerging from the wreckage to rebuild a home. You will take on the roles of doctors, soldiers, and scientists as you embark on personal journeys to reclaim the night and rebuild the light. That theme is poking about in the background and punctuated by emerging narratives and appropriate illustrations. In the foreground, play is somewhat abstract which can be both a boon and a curse.

The starting situation consists of the base tile in the middle of the table surrounded by a minor stable of resources–medicine, ammo, science, and food. Your character is represented on the map by a meeple and you spend the day to day grind of the world-that-is by spending action points to explore and collect. You can take tiles from the stack and place them adjacent to your location with an explore action. You can gather all the resources of a particular type in your current and adjacent spaces. You can do some minor crafting like building armor or even traps to harass enemies. You can also run like hell. 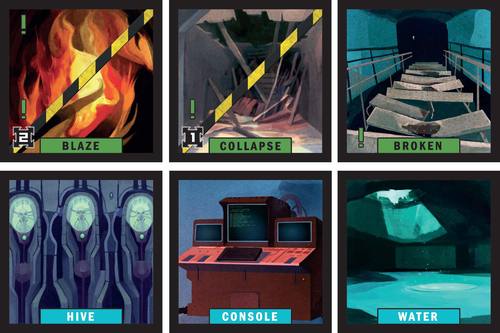 The core of this design is simple. Much of the game is spent exploring and gathering those resource cubes. Sometimes you’ll be running that phat loot back to your home in order to deposit food. You see, everyone is starving and your base gobbles up a food cube every single round. This constant degradation of supply and the hardships encountered brings a similar vibe to the wonderful and extraordinarily brutal Robinson Crusoe.

But that element of horror, of sprinting down dark corridors and putting blisters on your heels-that’s here in spades. You’ll be pushing up against the edge of the map with a single action point remaining. You look up to the group, “should I explore?” Everyone hems and haws and you finally stammer “YOLO!” and flip that top tile. Then the Behemoth spawns right next to you, literally scaring your cutesy meeple survivor away. Then you start sweating.

One trick Unknown pulls off is that it doesn’t give you many weapons. You can shoot enemies from a couple of tiles distance but you need two ammo cubes, which are of course precious. This is definitely more The Last of Us than The Walking Dead in terms of sheer firepower. You can also fight the faceless monstrosities by moving onto their space, or simply letting them catch up to you in their movement phase. This triggers a war of attrition as you beat each other down trading wounds until one of you gives up the ghost. It’s brutal but it’s sometimes your best option.

The problem is that some enemies make a bee line for your base. If they make it there they will ravage your food-stores, taking minimal damage but destroying those precious green cubes. I can feel my mom’s pain back in the 90’s bringing home a bunch of groceries and staring slack-jawed as my brother and I devoured them like possessed demonic hosts. But here, each food gorged upon means lives will be lost. If you can’t lose a food cube in the cleanup phase then it’s game over, man (we miss you, Bill). 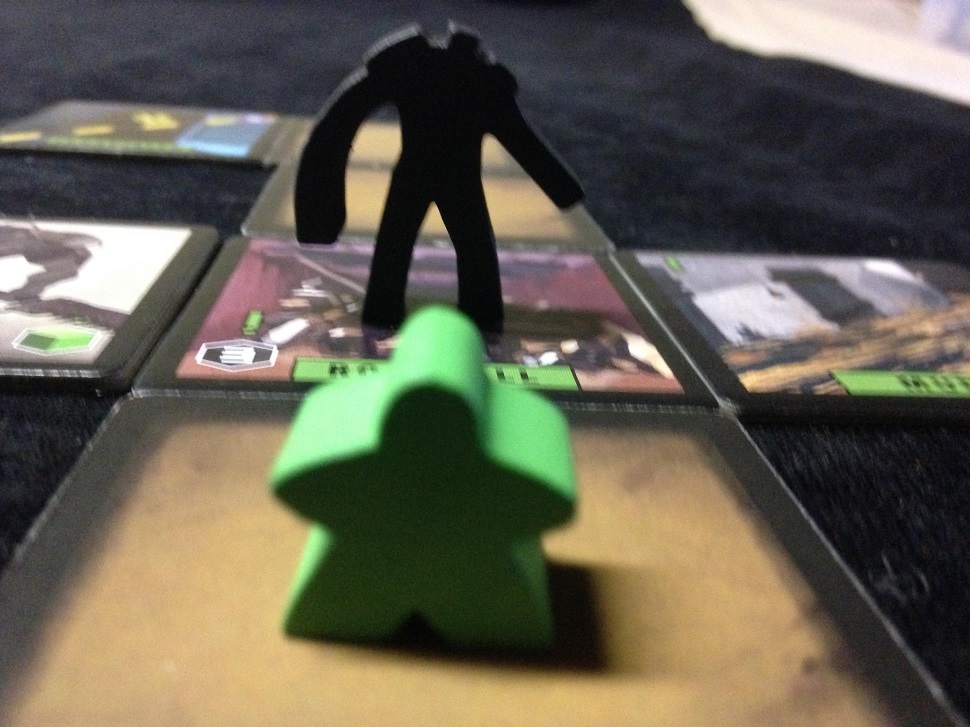 The overall feel of Unknown is a mix of exploration, resource scrounging, and tower defense against horrific enemies. You need to strategically unite in order to puzzle out your actions long term and cut-off an enemy before they invade your safe house. Sometimes you need to flee down a series of tiles and lead a pursuing beast into a trap. It’s riveting stuff because the game keeps the pressure on and a boot against your neck. If the razor-sharp teeth and gangly limbs won’t get you, then a shortage of Twinkies and Spam will.

Besides the abstract nature of tile laying and resource acquisition, Unknown also faces a long-term hurdle. While there is a solid amount of variety found amid the 100 or so tiles, eventually things get a little samey. The magic of exploration is partially grounded in discovering the unknown (yeah, I just did that). The edge becomes blunted slightly after several plays as you develop expectations and the shock wears off. Challenge and interest still remains as the order and context of discovery persists. Yet those first few plays will be just slightly more magical and effective.

The unexpected developing narrative makes up for that loss of acuteness. The situation spirals out of control and the path is tenuous. You’re not playing through a story so much as penning one with your actions. It’s a powerful experience due to the probabilities of a hellish outcome.

If you’re looking for a simple yet effective coop with a great deal of depth, Unknown shines as a light in the dark. Each play reveals an unexpected narrative as the map develops and your safety becomes unhinged. It boasts tension and greater thematic trappings beyond flavor text and forced setting. Make a supply run and wade through your nightmares into Unknown.

Are you a fan of post-apocalyptic games? Interested in checking out Unknown? Let us know in the comments!