TWISTER Is the Perfect Storm of Success and Filming Disasters - Nerdist

The storm-chasing adventure film Twister became a hit with viewers following its release on May 10, 1996, even though critics weren’t quite so kind. It saw commercial triumph too, becoming the year’s second-highest-grossing film behind Independence Day. Pretty good for a year that also brought us Mission: Impossible and The Rock. The movie’s success wasn’t that much of a surprise with big-budget disaster flicks at their city-destroying apex.

Twister hit the big screen decades ago, which means it’s time to take a trip down memory lane. Let’s look at the film, its improbably star-studded cast, and the behind-the-scenes turmoil that nearly turned the movie into the kind of disaster its heroes were chasing.

The Elements of a Successful Disaster Flick

Twister had the keys for success, starting with its premise. Dr. Jo Harding (Helen Hunt) and her motley crew of storm chasers head to Oklahoma during the strongest tornado season in decades. The team plans to unleash “Dorothy,” a prototype data-gathering doohickey that could revolutionize the scientific understanding of tornados. But rival storm chaser Dr. Jonas Miller ( Cary Elwes) has the same idea, and the two twister-tracking teams find themselves in a race to launch their sensors first. 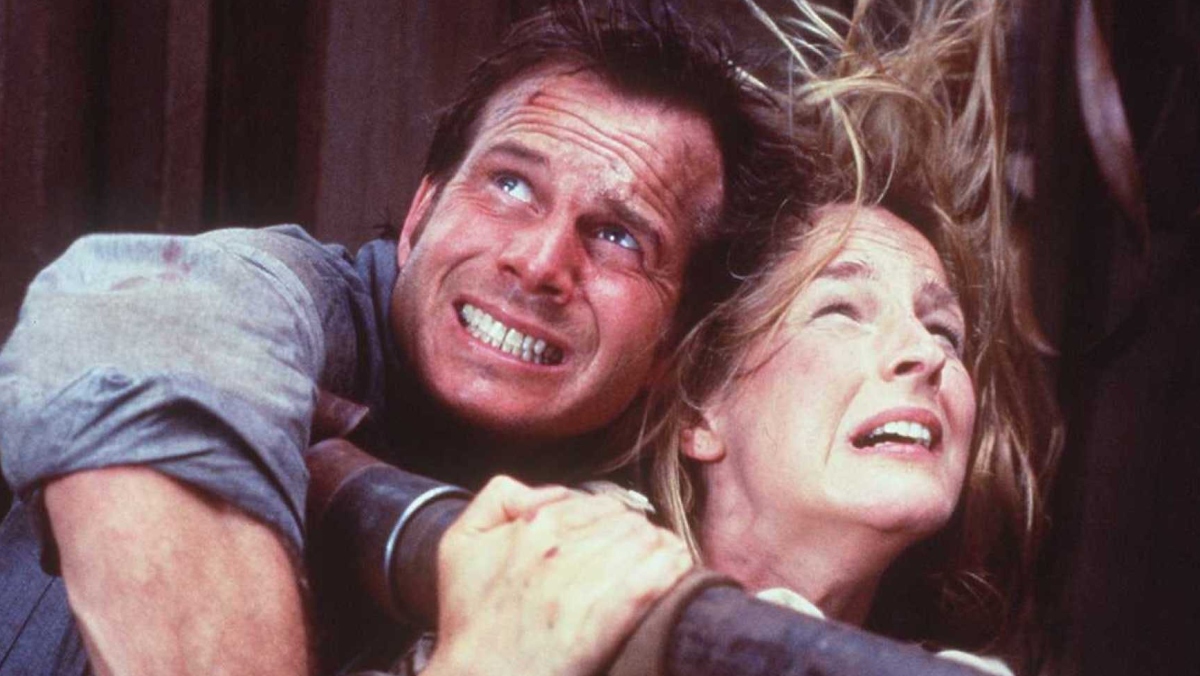 Add in Jo’s estranged husband Bill (Bill Paxton), a weatherman not quite as out-of-love with Jo as he’d thought, accusations of professional theft, and a dear aunt conveniently living in Tornado Alley, and you’ve got just enough human drama and rom-com beats to counterbalance all the (literally) groundbreaking special effects.  In addition to Hunt, Paxton, and Elwes, the remaining cast was a murderers’ row of familiar faces and soon-to-be-famous actors: Alan Ruck, Jeremy Davies, Jake Busey, Anthony Rapp, and Philip Seymour Hoffman, in one of his first big movie roles.

Twister was produced by none other than Stephen Spielberg and directed by Jan de Bont, who was fresh off Speed’s success. (And with the good sense to bail on the first American Godzilla remake.)

Michael Crichton (who wrote the Jurassic Park novel) his then-wife Anne-Marie Martin wrote the film’s script. Industrial Light & Magic did the special effects; their efforts led to two Academy Awards nominations and significantly raised the bar for what digital effects could do.

All of that certainly seems like a sure thing. In fact, the film got a greenlight without a script. But despite the money and the star power, things began to fall apart behind the scenes like a drive-in caught in an F4.

The Realities of Ongoing Script and Set Storms

Crichton’s script wasn’t quite working, and Joss Whedon came on as an uncredited script doctor. Whedon left the project not once but twice with a different person replacing him each time. The final person kept revising the script on set, up until the last day of shooting. According to an Entertainment Weekly (EW) profile, director Jan de Bont was, reportedly, extremely difficult to work with, pushing actors and crew alike to the edge. Claiming that de Bont “didn’t know what he wanted ‘til he saw it,” the entire original camera crew, led by Oscar-nominee Don Burgess, left five weeks into filming.

Not that de Bont, or anyone, could blame them. To call their filming experience a disaster is an incredible understatement. Shooting on-location meant that the light, sky, and wind, practically main characters in a tornado-chasing movie, were always changing and causing continuity problems.

Worse yet, at least for the film, the production began during “ the sunniest, most blue-sky tornado season in Oklahoma history.” This led to costly and counterintuitive compensation for later digital effects. Unprecedented heat waves kept coming repeatedly. Heck, even the corn seemed to be against them. An entire field grew “tassels” overnight and did not match with shots from the day before.

But what really soured the experience for the cast and crew were the almost constant injuries. In fact, “brutal” has probably been the word most commonly used to describe the shoot. Or, as Helen Hunt put it,    “[de Bont] really threw shit at us.”

The director tried to keep the special effects as practical as possible. So, this meant using giant wind machines to frequently hit the cast with hail and fake glass.  His desire for a documentary-style feel meant putting his stars as close to the action as he could get away with, even if blowing real dust at them caused real eye infections. Cary Elwes said in the aforementioned EW post that by the end of filming, everyone was beat-up. They all got their share of cuts and bruises; however, their ordeals didn’t match Paxton and Hunt’s injuries.

The Twister stars became temporarily blind after staring into lights bright enough to darken a clear blue sky. They later needed hepatitis shots after laying in a ditch of stagnant water for a scene. Hunt repeatedly hit her head on a low bridge for another scene; she also had a possible concussion after a car door hit her during a faux windstorm.

And it wasn’t just the cast who got beat up. The constant rush of industrial fans made it hard to hear, and accidents were common. Jan de Bont was “clocked” by a camera at one point, knocking another cameraman to the ground. A stunt house fell on the replacement director of photography and sent him to the hospital, leaving de Bont to fill the role himself for the production’s final days.

The fact that this “ perfect summer blockbuster” even exists is nothing short of a miracle. But, much like its heroes, Twister defied the odds – and the disasters – and became a breathtaking wonder all its own.