There is no doubt that Dragon Ball ZÂ is one of the most popular animes to ever hit the West. It’s been so successful that it has garnered love from all different age groups and has spawned films, DVD’s, action figures, posters, and even video games.Â With the recent release of Dragon Ball Xenoverse, we thought we would take the opportunity to look back at the history of Dragon Ball Z and all of the crazy fillers, hair-dos, jokes, and epic battle scenes to pick out the top 7 episodes in the Z series. Let us gather all the Dragon Balls and call forth the eternal dragon, Shenron and find out whichÂ episodes make the cut.Note- this list was compiled through the 9 Seasons on Xbox Video. If titles are off or episode numbers are off use Xbox Video as a referenceÂ 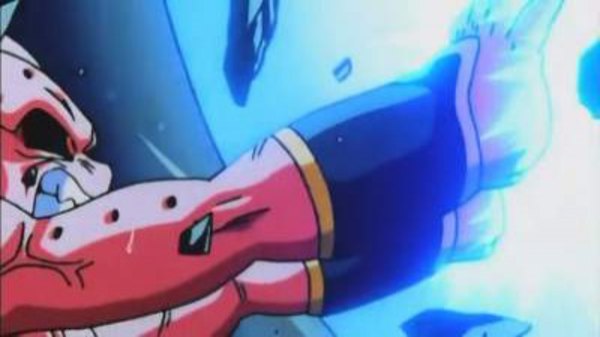 7) Season 9, Episode 33 “Spirit Bomb Triumphant” — Kid Buu Saga, The end of an eraFirst on our list is the final battle between Goku and the pure evil that was kid Buu. This victory was bitter sweet, we got to watch our hero take down the most powerful and ruthless enemy the Z fighters had ever seen but it also meant the end of Dragon Ball Z. Goku uses the same technique that had helped him save the world before, the Spirit Bomb.Goku delivers a speech that showed just why we loved him so much. He is the antitheses of Kid Buu, he is pure good. Using the Spirit Bomb, he destroys every ounce of Kid Buu, allowing everyone to finally live in peace. 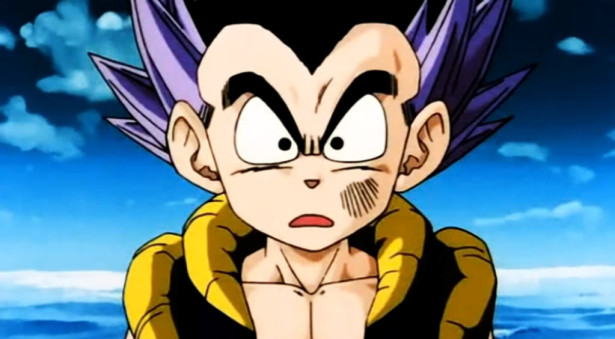 6. Season 8, Episode 32 “Gotenks is Born” — Majin Buu Saga, Gotenks is hilariousÂ What in the world is fusion? The only other time we had seen anything like Fusion came from the Namekiens, they have the ability to come together to become more powerful. Humans/ Saiyans doing it though? Unheard of but Goku from the dead, has learned a new technique that allowed people to become one for half an hourÂ and he was certain it was the key to defeating Majin Buu. Earths last chance came from the two youngest warriors Goten and Trunks. Make no mistake, both could turn Super Saiyan already so they had some intense power.Fortunately for us the technique required a silly dance that would only work if the two were in complete sync with each other. The dance spawned some silly outcomes like old man Goten and Trunks, even a fat version. It was comedy at its best. Once they finally got it down, the best character from the Buu Saga was born, Gotenks. He was cocky, cracked jokes, and had all of the power to back it up. He would not listen to reason and would go off fighting Buu like it was nobodies business.Â In future episodes he even had a chance to finish off Majin Buu but his cockiness got the best of him and failed. 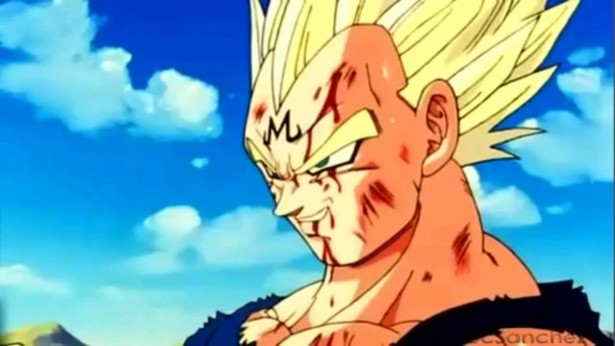 5) Season 8, Episode 18, “FinalÂ Atonement” — Majin Buu Saga, VegetaÂ sacrifices himself for those he has learned to loveVegeta has become one of the best and most loved “villains” of all anime. Throughout the series he changes and grows to become a good guy, even having a child with Bulma. This was his moment, and it may even be one of the most touching episodes in the whole series. Earlier in the season, Vegeta had accepted Bobidis evil power so that he could reach new power levels, hoping it would allow him to defeat his rival Goku. The whole season we had wondered if he had gone back to the dark side but the prideful Saiyan would never allow himself to be controlled by some troll looking creature. He proves once again that he is with the good guys.Buu at this point was unbeatable so the Prince made a choice to give his own life to rid the world of this parasite. He says his last goodbye to his now young son Trunks, showing he truly loved his family and friends. It was incredibly noble and one of the many reasons this show just worked so well. Unfortunately Vegeta gives his life, all while not ending Buu. 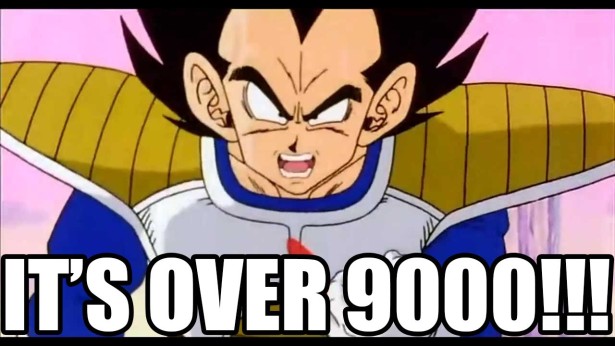 4) Season 1 Episode 28 “Gokuâ€™s Arrival”â€”Saiyan Saga, Over 9,000!After all the memes, jokes, and spoofs that have resulted from this episode, there was no way it wasn’t going to be on this list. This episode has it all, a sentimental moment between Gohan and Piccolo that is the beginning of a beautiful father- son like relationship between the two, it had Goku making a grand entrance, and a line that would be repeated by nerds all over the internet.Goku makes a habit of taking his time in showing up for a battle and this time was no different. Showing up just in time to save his son, Goku makes mince meat of Nappa the supposed second strongest Saiyan at the time. This is when Vegeta is watching the fight and using his trusty scouter he reads Goku’s power level- uttering the most transcending words of the show,”It is over 9,000!”. Â This also marks the beginning of a rivalry between Kakarot and the Prince of all Saiyans, Vegeta. 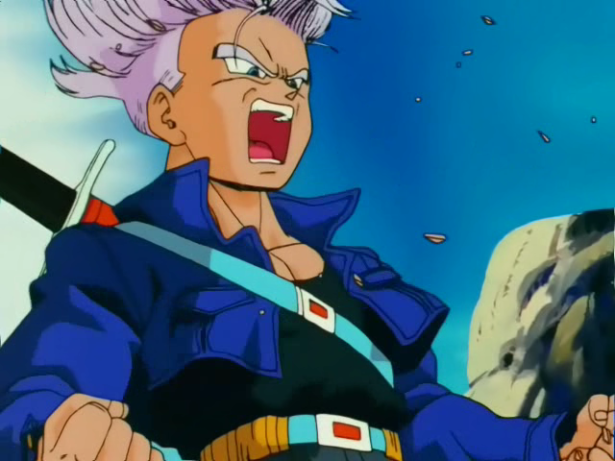 3) Season 4, Episode 13, “Another Super Saiyan?” — Android Saga, Trunks makes his first appearanceÂ Now we get to the nitty gritty at the top of our list. Before everyone could go Super Saiyan there was only one, or was there? This episode we get more into the mysterious warrior. He wields a crazy sword, and he himself can transform into a blonde haired warrior. At the time this was absolutely insane. It had taken Goku so long to transform into a Super Saiyan and it took all of his power to reach this level, this purple haired kid did it without even breaking a sweat. Seriously though, he wielded a sword. It can’t get cooler than that.What kind of sorcery was this? It doesnâ€™t even end there. He goes on to cut Frieza in half along with Frieza’s father King Cold. It almost took Gokuâ€™s life to defeat this space monster but it took this kid less than an episode to taunt and destroy the villain everyone feared the most.Â Of course we all know this kid as Trunks now, son of Vegeta and Bulma but it was a bit mind blowing to watch him take down this super villain with such ease.Â He also brought news from the future that lead the events of the Android/Cell Saga. 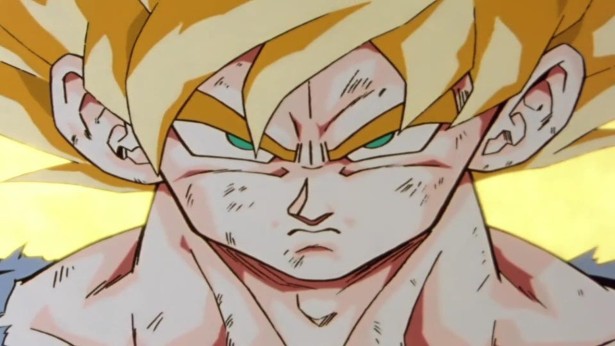 2) Season 3, Episode 21 “Transformed at Last” — Frieza Saga, Goku goes Super SaiyanIn our second slot goes theÂ beginningÂ of a legend. After falsely believing they had defeated Frieza the Z fighters let their guard down and the evil overlord took advantage. He quickly deliversÂ an almost fatal blow to Piccolo andÂ then kills Krillin. Engulfed in rage, Goku lets all his emotions out and becomes a legend.Â Frieza still is considered as one of the best villains in the series and he had proven he was worthy of the title with his limiteless transformations, proving to be much more difficult to defeat than anyone could have imagined.Before everyone and their kids could go full blonde (even Trunks), there was only one warrior that had the ability to reach the legendary statues–our good friend Kakarot. Super Saiyan might just be one of the most iconic things to come out of the series and reached all levels of popularity so much so that we even made our very ownÂ spoof. This episode was the first time we got to see the epic power reached by our favorite hero. 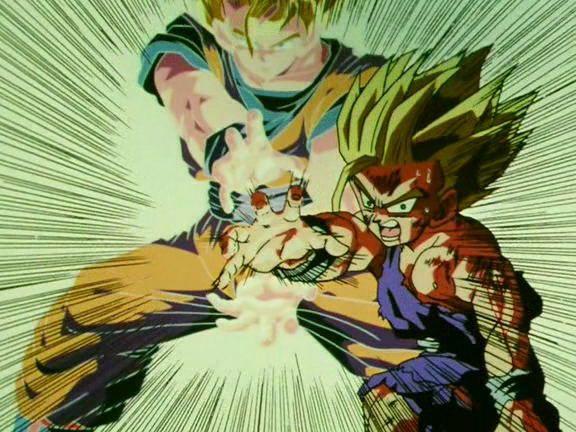 1) Season 6, Episode 26 “Save the World” — Cell Saga, Father Son KamehamehaÂ At our number one spot is yet another iconic scene from the show. Up to this point Gohan had already had his chances to finish Cell off but decided to ignore Goku’s plea to end the green monster and thus Cell turned the tables, killing Goku and breaking Gohans arm. Things were truly looking bleak, our young hero was drained of all energy. With pure drive Gohan musters all the energy he has to use one more powerful blast, the iconic Kamehameha. His blast went up against Cell’s blast and they had reached a stalemate of blasts with both putting their all to defeat each other. It all culminates to an image of Gohan, bloodied and battered, using one arm to use his fathers favorite move with Goku’s spirit right behind Gohan, driving him to victory.This is the most wicked moment in the whole series. Up to this part of the series, Gohan had only shown glimpse of his incredible power and after the surprise that Goku believed his son was the only one capable of beating Cell, this was the young Saiyan’s moment. We finally got to see just how powerful this young kid was and how capable he was, culminating to this one scene. Technically he should be much more powerful than his father, being able to turn Super Saiyan at a young age and Goku knew this. It was only fate that he would take his fathers place and it was poetic. After this Gohan becomes the best fighter outside of Goku and Vegeta but he never reaches these heights ever again. That marks the end of our list, let us know if you agree or disagree and whether we missed anything. The show has so many incredible episodes and moments thatÂ it was difficult and heart breaking to keep some epic moments out of the top 7.

How to Unlock Dark Link in THE LEGEND OF ZELDA BREATH OF THE...

Is the PS4 Pro Worth the Upgrade? (Review)