For a genre full of terrifying nightmares and death, horror has have engendered warm love and admiration for its stalwart actors. You can attend whole conventions of nothing but panels and signings for people in horror movies. It’s really a lovely thing. And sometimes, people will spend all day in a movie theater to celebrate the career of one of them. Beyond Fest 2019’s final Sunday offered fans the opportunity to worship at the altar of one of the most beloved horror heroes of them all, Mr. Tom Atkins, in the first ever Tom-a-Thon.

We watched three of Atkins’ best movies on the big screen. The house was packed for the entire six hours, culminating in a Q&A with the man himself. The movies in question were all absolute bangers. First the 1983 movie Halloween III: Season of the Witch, which was once derided for not having Michael Myers but is now a bonafide cult favorite. Second, the absolute crowd-pleaser Night of the Creeps, easily Tom Atkins’ most iconic performance. And finally a young, mustache-free Tom joined an all-star cast in John Carpenter’s 1980 film The Fog. It was the perfect ebb and flow of Atkins as a screen star.

For those who don’t know him, Tom Atkins is a big, burly, usually mustachioed character lead who generally goes for gruffness. In addition to the three movies mentioned, you can find him in Creepshow, Escape from New York, Lethal Weapon, Maniac Cop, and tons more. He’s one of those actors who brings a persona with him. Little did I realize until watching the three movies in a row, Atkins has a few traits that follow him through horror: 1) he’s almost always drinking; 2) he’s an unrepentant womanizer; 3) he’s constantly on the edge of a complete nervous breakdown. What fun!

Halloween III: Season of the Witch

John Carpenter had the idea to do an anthology horror series bearing the banner title Halloween; unrelated horror stories all set on and around October 31. The trouble, of course, is that after Halloween II, a direct sequel to the first movie, the public just wanted more Michael Myers. In the age of Jason Voorhees, the slasher movie ruled. But that is not what Carpenter and his producing partner Debra Hill gave the world with Halloween III. Instead, the film became a crazy story of an Irish novelty magnate who decides to implant pieces of Stonehenge into Halloween masks to kill children with witchcraft if they watch a certain broadcast signal. Naturally.

Atkins plays Dr. Dan Challis, a constantly-on-call emergency room doctor who treats a man raving about “them” coming to get him. While Dan takes a snooze, a man in a suit enters the hospital and tears the patient’s skull apart via the ocular. Then he casually walks out to his car and sets himself on fire. Obviously pretty peculiar. Before long, the dead patient’s daughter Ellie (Stacey Nelkin) arrives and wants to investigate. Surely her father, a simple convenience store owner with an affinity for Halloween, had no enemies. Dan accompanies Ellie to the Silver Shamrock factory in the company-owned town of Santa Mira. Bad stuff ensues. 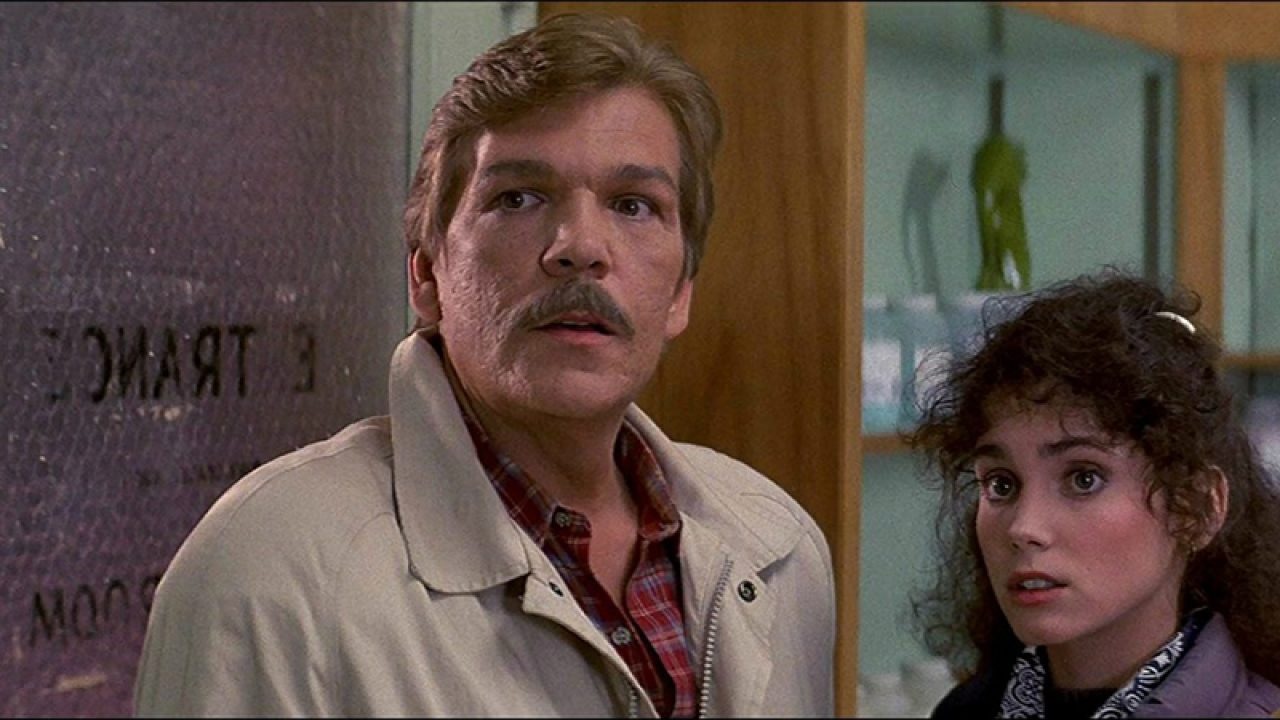 Not a good doctor

The main takeaway from the Atkins perspective in this one is: dude is UNFIT. Not physically; you do get a post-coital shot of Dr. Dan’s ass. He’s an alcoholic doctor, meaning he’s constantly jonesing for a drink while saving people’s lives. Multiple times in the movie, he either has a six pack in his hand, goes to a bar, or says “I need a drink,” to the howls of laughter from the Beyond Fest crowd. He’s also a deadbeat dad. More than once in the film he completely blows off his fatherly responsibilities (like, you know, spending more than a minute with his children) in order to go back to work or follow up on this investigation. It happens so frequently it has to be a joke.

And yet somehow he ends up in bed with Ellie, who is 25 years younger than he is, absurdly quickly—another good laugh moment with the crowd. This is after a flirtatious exchange at the coroner’s office with his friend whom we’re led to believe had a fling with Dan she wants to rekindle. How does this guy do it? Oh, it’s an ’80s movie.

Night of the Creeps

Tom Atkins’ own personal favorite. A comedic throwback to ’50s-era sci-fi chillers, Fred Dekker’s Night of the Creeps gives Tom easily his most iconic performance. The movie follows a couple of college losers who want to impress a particular sorority girl. The only way they can think to do it is to pledge the coolest fraternity on campus. Those rich a-holes don’t want the dorks in their frat, so they make them perform an impossible stunt: steal a cadaver from the school’s science lab. 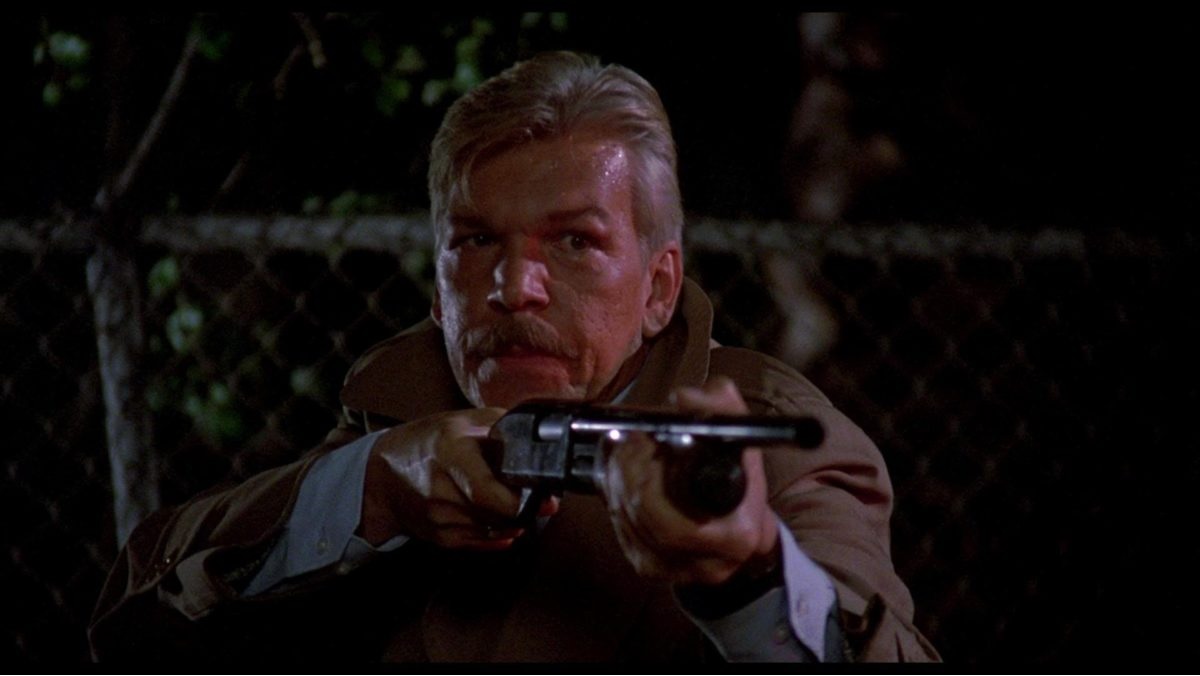 The cadaver they find is in cryogenic hibernation but they accidentally release it. It’s full of an alien slug creature that controls dead bodies until more of them can hatch out of their skull. That’s where Detective Ray Cameron (Atkins) comes in. He’s a hard-drinking (go figure) veteran cop who has never gotten over how a crazy ax murderer killed his ex-girlfriend in 1959; Ray hunted down the murderer and killed him. So he’s an unhinged, nonsense-free police detective who might just be the best hope for our hero and heroine to fight off these alien-zombies and get out alive.

Not a good cop

Detective Cameron is psychotic and unstable, but you cannot help but love him. Whenever he answers the phone, he says “Thrill me,” constantly looking for a reason to get up in the morning. His apartment is full of empty whiskey bottles and wants to drink himself to death. But the audience absolutely loves him. He’s the stand-out character in the movie, a hilarious but somehow sympathetic reflection of late-’80s machismo. Atkins himself giggled gleefully at the Q&A remembering it.

The triple feature finished up with an earlier performance: John Carpenter’s 1980 movie The Fog. Rialto Pictures just did a fabulous restoration of it and it looks marvelous. Of the three movies, this is easily the least comedic and Atkins’ performance is the most grounded. But it was really great to see what an actual hero of his looks like rather than a flawed or downright bad guy who happens to be on the side of good.

The coastal town of Antonio Bay in Northern California is about to celebrate its centennial. But the town’s founders did so by driving a ship of lepers (the leader of whom was exceedingly wealthy) into the cliff by lighting an errant guide fire. Now a strange fog is rolling in between midnight and 1 am and in it are the ghosts of the leper pirates, looking for their revenge. It’s a slow-moving, moody ghost story that has to be one of Carpenter’s best. It works in a completely different way to the more relentlessly paced Halloween or The Thing. 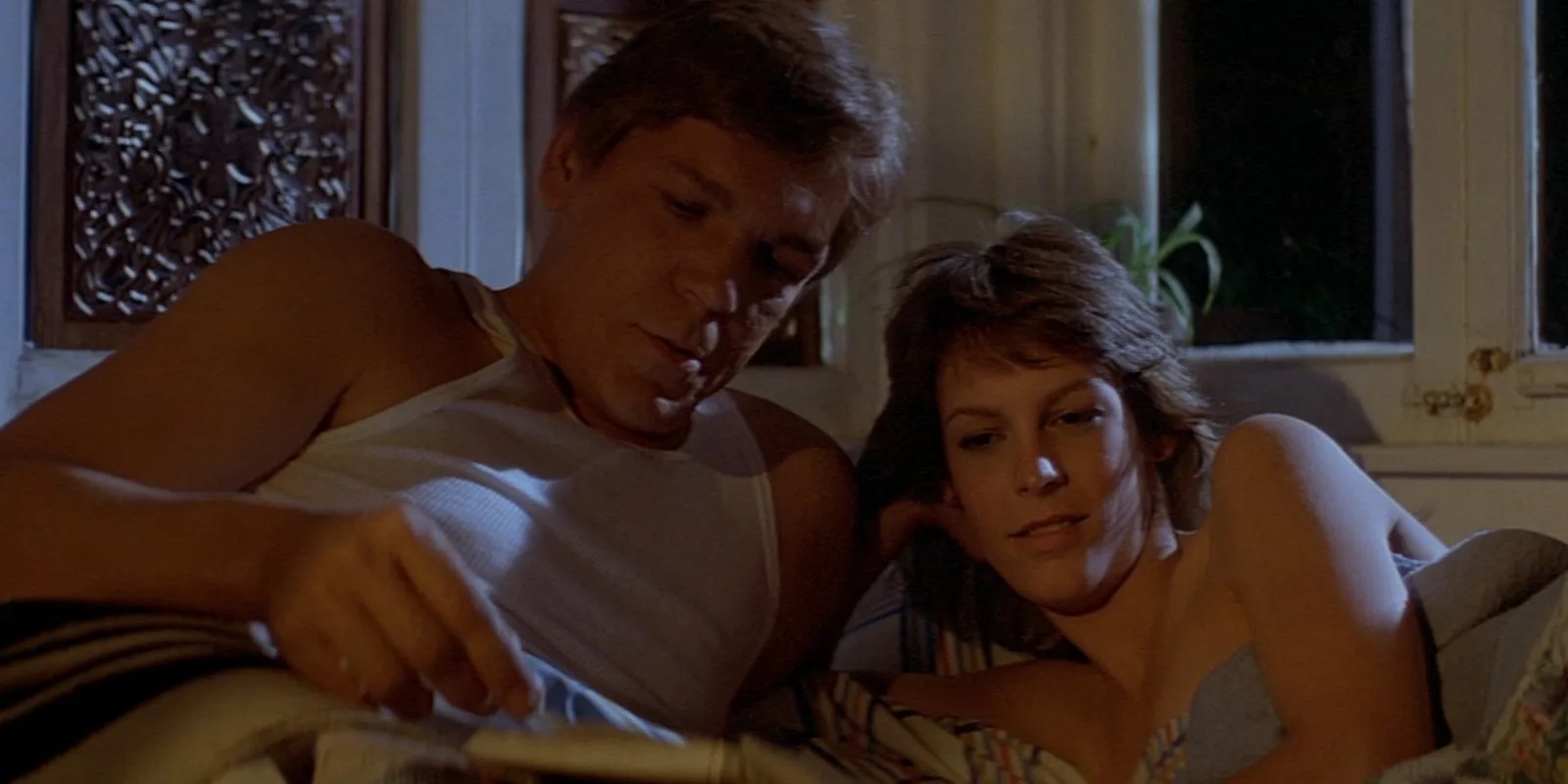 At last! A good-good guy!

The Fog has a large cast of characters with different storylines that eventually converge. Adrienne Barbeau plays the town’s lone radio DJ and lighthouse attendant who sees the fog rolling in and can warn people; Janet Leigh plays the town planner trying to convince the drunken Father Malone (Hal Holbrook) to allow the Centennial reception to be in the church; and Jamie Lee Curtis plays a hitchhiking college student who just happens to get picked up by… longshoreman Tom Atkins!

What I love about Tom in this is that a) he’s clean-shaven, which is weird; b) he’s a genuinely nice and sane guy; and c) he still drinks and drives and sleeps with Jamie Lee after their first scene. He ends up doing most of the movie’s boots-on-the-ground investigating of the ghostly deaths and helps barricade the church at the end. It all started with The Fog.

Beyond Fest celebrates the best and most enjoyably cheesy parts of genre cinema, and it allows character actors their day in the spotlight. Tom Atkins flew to Los Angeles from his home in Pittsburgh just to take part in a day devoted to him. That’s amazing! People love him, and seeing these movies again, with a crowd full of like-minded weirdos, it’s not hard to understand why. The dude rules. He’s about to turn 84 and is basically a B-movie god.

So thanks for the fun, Mr. Atkins. It’s Miller time.