Games that are meant for kids aren’t usually meant for adults. Sure, you might get some enjoyment solely from playing with the little ones, but the games themselves are often awful chores. We’ve talked before about some titles that break the monotony and provide enjoyment even for adults. But they aren’t the only ones. Here are three more titles that you’ll have fun playing right along with the kiddos. 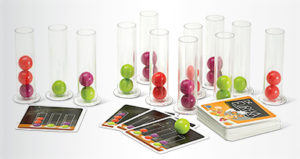 In Dr. Eureka, each of you gets three test-tubes with chemicals (represented by colored balls) and it is your job to appropriately mix them. Each tube has two colored balls in it. At the beginning of the round, a card is flipped that shows those same balls in different combinations in each tube. Your goal is to get your tubes to match the cards. But you can’t just dump them out and re-insert them. Instead, you have to carefully pour the balls from tube to tube until you get the concoction just right. First to do so wins the round.

That dexterity element substantially elevates Dr. Eureka.  First, it can be a little tricky to keep the balls from spilling out. They tend to race out as you tip them.  You need to maintain a steady hand while also racing to complete the puzzle. Plus, as you pour the contents back and forth, you get an unmistakable mad scientist vibe. But more than just the manual manipulation, it challenges you to pour the contents correctly.

Sometimes, you have to add too much to a tube in order to get another tube right. Other times, you end up with the colors in the right tube but a little jumbled. You need to carefully pour them out so that you can put them back in correctly. In fact, it’s not unlike the magnificent Uluru – but with less complexity so kids can partake. 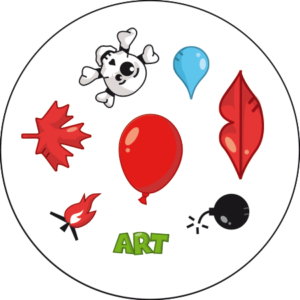 When I first heard about Spot it!, I let my board game snobbery get the better of me. It’s certainly a mass market game sold on the toy shelves of most major stores. If it isn’t found primarily at hobby shops and specialty boutiques, how good can it be?  Turns out, quite good. Quite good, indeed.

Spot it! is just a tin of 55 circular cards. Each card has an assortment of eight icons on it and all the cards have different icons. Well, almost all different. You see, even though each card has so many images, every single card shares exactly one image with every other card. So no matter which two cards you have in front of you, there will be exactly one shared icon. Crazy!

From that simple premise, you get an enjoyable game. Actually, the rules come with three setups which are all variations on the theme. For example, you might play where each player starts with a card. Then a neutral card is flipped to the middle. The first player to find the icon on both their own card and the neutral card gets it. Most cards win. Or you could put the cards in a three by three grid and look for three cards with the same symbol.

Spot it! has a simple premise and so it’s easy to play with younger kids. And the scanning skill being utilized is one at which children can excel. So not only do you get to have fun, you can actually get challenged by your kindergartner. 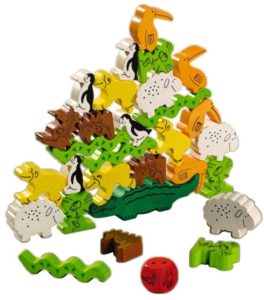 Each player gets seven blocks of various animals – each shaped very differently. An alligator block is placed in the middle and each turn, the player tries to stack another animal or two on the pile without anything falling over. The first few placements are easy, but things can get very difficult from there. Especially with a full compliment of four players.

Another dexterity game, this tends to be a fairly good equalizer. Most kids spend a lot more time stacking blocks (or staging dolls or army men) and so can have an advantage over adults. Best of all, like the animals themselves, the tension mounts higher and higher as the game progresses. I’ve seen players – young and old alike – get extremely invested in the tower of creatures being built.

What games do you enjoy playing with the kiddos?  Tell us about it in the comments.

TAGGED: animal upon animal, Dr. Eureka, spot it, Board Games