Who doesn’t love chucking dice? And who hasn’t thrown those six-sided cubes of fun during childhood games of Yahtzee?

Most of us have played the classic game at one point in our lives, but quickly grew tired of its repetitive play and interminable wait between turns. Your copy probably met the same fate as mine: abandoned at my parents’ home, quietly collecting dust on some long-forgotten shelf. That said, gamers are happily playing games based on Yahtzee’s core mechanism: roll and write. Whether they’re simple twists on the classic or completely new games based on rolling and writing, this new school of dice-based games offer new challenges and lots of replayability.

Here are five roll-and-write games that should be part of every gamer’s collection. They’re perfect for introducing your non-gaming friends to the wonderful world of gaming or using them as a break during a night of heavy Euro-gaming. And they’re perfect for this weekend’s International Tabletop Day! 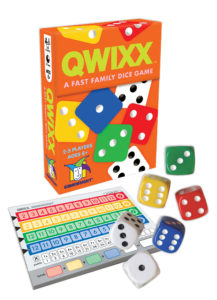 Players score more points as they cross off more boxes in each row, but here’s the catch: once a player crosses off a number, they can no longer cross off any numbers to the left of it. So, if somebody crosses off a 7, then they’re saying goodbye to all the numbers (and possible points) to the left.

After two rows have been completed (or four penalties occur for being unable to cross off any boxes), final tallies are made and the player with the highest score wins. 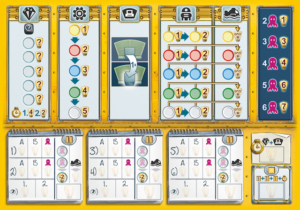 OctoDice is an overlooked title set in the universe of Aquasphere, a much heavier Eurogame by Stefan Feld. This one, however, keeps things light as players explore the ocean depths and have robots to do their bidding via lots of dice chucking.

Like the classic Yahtzee, players roll and write on their score sheets as they collect sets of particular items. However, after each roll, a player must “lock” two dice, meaning they can no longer re-roll them and must mark them on their score sheet.

Each die has a few icons and number and color combinations. These match up with the sets that players attempt to score such as crystals, research, labs, bots, and submarines. Players must also roll at least two octopods per turn or else lose two points.

Two things stand out in this solid game: first, players may follow up to two of their opponents’ actions, thus allowing them to nab those pesky items they missed on their own turn, and, second, as players expand their lab, they gain special powers. 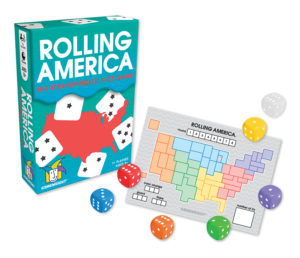 If anybody in your group is a sudoku fan, then look no further than this easy-to-learn and hard-to-master game for your next gaming soiree. Everybody receives a multi-colored map of the United States, then seven different colored dice are placed in a bag then drawn and rolled one at a time. For each die rolled, all players must write that number in the corresponding colored region of their map. After six of the seven dice are used, the dice are put back in the bag and the next player starts a new round.

Placing the numbers is where the tension lies in Rolling America since numbers cannot be more than 1 above or below an adjacent number. So, if a player rolls a yellow 3, they must write it in a yellow state and it must be next to a 2, 3, or 4. If there are no available spots, then the player marks an X in that state. After 8 rounds, players tally their Xs and the lowest amount of Xs wins the game.

Each player also receives three special powers that allow them to protect a number (thus allowing it to be adjacent to a non-conforming number), duplicate a number, and use a number in a different region.

This one is also a fun solo puzzle. The designer says the best he’s done is 6. My lowest is a 7. The gauntlet has been thrown, my fellow Rolling Americans.

The Civilization Builder: Roll Through The Ages 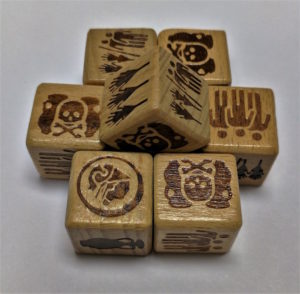 Pandemic designer Matt Leacock created Roll Through The Ages as a way to experience classic civilization board games without having to spend an entire day doing so. And what better way to do this than rolling a set of chunky wooden dice?

Players roll, re-roll, and roll a third time before writing onto their scoresheets, just like Yahtzee. However, Roll Through The Ages offers a surprising amount of depth, as players try to build their civilization from the ground up by using dice representing people, food, goods, money, and disasters. As they record their items, a player’s civilization progresses and gains additional benefits.

Basic blocks of civilization (food and goods) are kept track on a wooden pegboard. These will eventually be used to build the long-term goals on a player’s score sheet, like cities that give them additional dice, monuments for points, or developments that are scored as points and provide special effects. Of course, as cities grow, so does the number of mouths to feed. If players don’t have enough food, then disasters can happen: famine, pestilence, or the dreaded victory point drought. 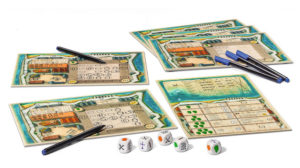 While not as popular as other roll-and-writes, Saint Malo is worth seeking out for its Euro-style play and cool gimmick: each player has their own erasable game board depicting Saint Malo, a city that they’re trying to make into the most prosperous via their dice rolls.

The dice generate resources, populate the city, and, unfortunately, determine pirate attacks. Players may roll up to three times, but any pirate swords remaining at the end of their turn will cause all players to lose victory points.

Of course, players can protect themselves from impending attacks by rolling wall icons and writing them on their game board. After a wall has been extended across one side of their city, players are immune to a certain number of attacks. Likewise, if soldiers are rolled, they can be written into the city and will also offer some protection against those darn pirates.

But a city is much more than a wall, of course. Players can also roll houses for immediate victory points or churches for end-of-the-game bonuses. Of course, they’ll need to roll logs first to build anything. If they need to generate money (which in turn can be used to set dice to a side of their choice), they’ll have to roll crates, which will then be converted to money when they roll a merchant.

There’s something really gratifying as you draw in citizens, resources, and structures within your personal Saint Malo game board. And there’s something even more gratifying when you’ve built up pirate-proof walls while your opponents get pillaged of their victory points.

What are your favorite roll-and-write games? Tell us in the comments!