When Games Workshop first re-launched the Warhammer Quest line, one of the great hopes was for a stream of compartmentalized expansions. I still have a warm nostalgic cavity in my midsection that fondly recalls trekking to the hobby shop and back-ordering the Witch Hunter or Pit Fighter expansions for the original title. Unfortunately, that nostalgia was never tickled with the new Age of Sigmar games. Things change though, and now we’re getting our first boxed addition in the form of The Dreaded Ambull entering the Blackstone Fortress.

If you’re not familiar with the school of old, you likely don’t even know what an Ambull is. Their origins date back multiple decades to Rogue Trader. They are enormous beasts that burrow and can withstand scorching temperatures. The enormous mandibles and hunched stature are the defining characteristics as they come across as sort of a 40k Umber Hulk. You may not be defecating in your trousers but I can guarantee you Janus Draik and his crew will be. 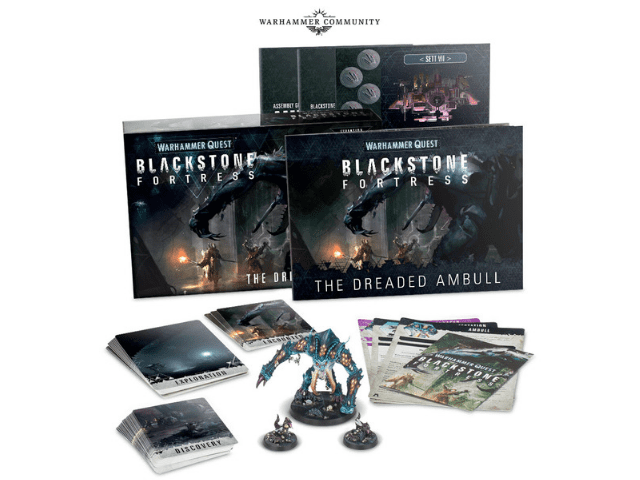 The box itself is quite small, particularly for the price. The Ambull mini is a beauty, and even better it utilizes the push-fit technology found in the Blackstone Fortress box. There are a couple of additional Borewyrm Infestation small minis, which are basically a cluster of maggots full of hate.

While the plastic makes up the bulk of the product, the real value arises from the cardboard. We have new exploration, discovery, encounter, and hostile cards. There’s material to spec out the Ambull in its more docile, “normal” mode, or as an enraged psychopath which will rend you limb from limb.

How you integrate this material is the interesting part. The manual suggests you embark on a new mini-campaign to track down the Ambull layer and fell the beast. This is a perfect introduction to the adversary and it’s a wonderful quest in its own right. The variability it brings to play, functioning as a new fortress to assault and a new type of clue to pursue, works flawlessly within the pre-existing scenario structure.

The best aspect of this new mission is the sealed envelope. I adore this small nod towards the current trend of Legacy-style board games as it affords a small reward that feels like a real-world treasure. There’s mystery surrounding the thing and it’s a joy to open a sealed packet and find something unexpected. 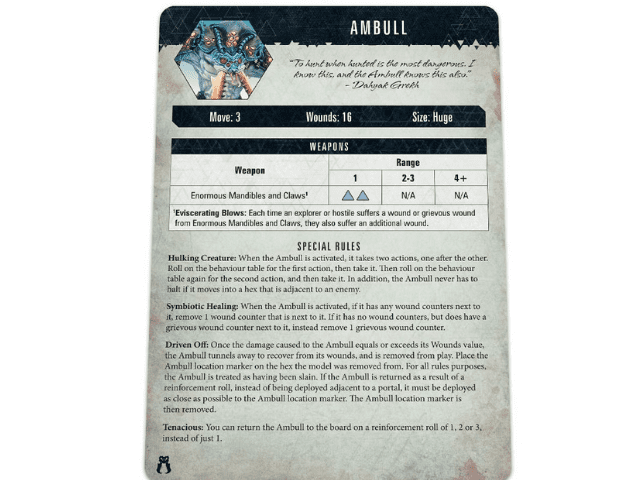 Your journey doesn’t end once you’ve successfully conquered the terror. You can then start mixing in these new cards with your existing encounters as the threat has awakened. In all honesty, you could even go right ahead and do this from the get-go. It’s probably a stronger thematic experience to follow the booklet’s suggested approach, but nothing will be harmed by adding some enemy variety right away.

This release will likely not blow your hair back, but it’s a very strong entry as the first extension. The enemy itself forms a boss-like encounter that can turn up unexpectedly. Its role as an apex predator is on point in the Blackstone Fortress setting and the entirety of the content feels as though it smoothly integrates without a rough edge.

Encounters with the beast are interesting. They will force you to adopt new tactics and challenge your wits. Of course, one of the qualities of this game is its swingy challenge level where it can sometimes become too easy or too difficult depending on your item acquisition and team makeup, and this doesn’t really change that. I’ve had encounters where the Ambull ripped my fragile dudes apart, and others where I’ve stomped the ugly bug’s face in. Fortunately, the majority of play has been a tense and even-handed affair. 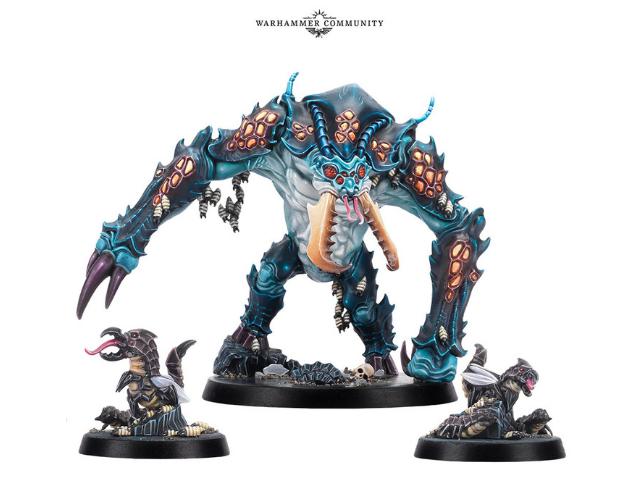 Upon first blush it does appear as a very expensive product, particularly for those more accustomed to the cost of board game content and not Games Workshop’s pricing. When you compare the miniature itself to other high quality designs of similar detail and size that criticism fades a touch. Furthermore, the printed material is the real get of the package, as it will provide additional life in your campaign and helps to keep this wonderful game fresh and inventive. There’s even some greater opportunity to field the beast in your standard games of Warhammer 40k with the included data card.

The Dreaded Ambull is ultimately an interesting and unique addition. Hot on its heels is the recently announced Traitor Commissar and Ogryn bodyguard release. With such a wealth of material to draw from, the horrific bowels of the Blackstone Fortress have a very bright future.