Mankind evolved to live, survive, and thrive on Earth, under the specific natural conditions of this planet. Finding a new home, whether because we need to or want to explore the cosmos, won’t be easy. Even minor changes in our surroundings could be catastrophic. For example, more or less gravity can wreak havoc on our bodies. But a recent scientific paper has provided a new idea for how we might be able move beyond our terrestrial limits. It doesn’t involve terraforming a planet or even finding one that provides the exact right conditions. It might be possible for us to settle in a giant space station orbiting the dwarf planet Ceres. And that would mean making some sci-fi dreams a reality. 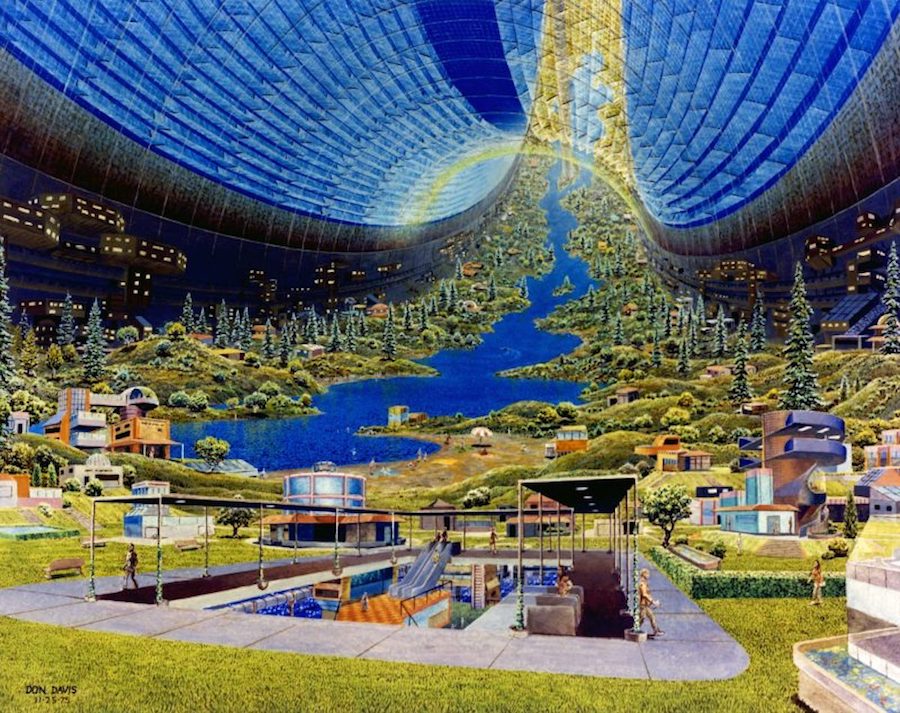 Dr. Pekka Janhunen, a theoretical physicist at the Finnish Meteorological Institute, has published a paper (which we first learned about at Universe Today) that lays out the potential for building a massive space settlement in high orbit around Ceres. It would serve as both a galactic home and outpost for mankind. And it could happen sooner than we think. Dr. Janhunen told Live Science that he believes humans could start settling on the megasatellite in as few as 15 years. Some of these concepts might not seem accessible to those of us who are not scientists. Fortunately, science fiction has already laid the ground work to help explain some of Dr. Janhunen’s ideas. From the paper:

“Ceres is selected because it has nitrogen, which is necessary for an earthlike atmosphere. To have 1g artificial gravity, spinning habitats are attached to a disk-shaped megasatellite frame by passively safe magnetic bearings. The habitats are illuminated by concentrated sunlight produced by planar and parabolic mirrors. The motivation is to have a settlement with artificial gravity that allows growth beyond Earth’s living area, while also providing easy intra-settlement travel for the inhabitants and reasonably low population density of 500/km2.”

The Martian provided a fictional example of the idea proposed here. Those astronauts flew to Mars in a spinning spaceship. The ship’s centrifuge created artificial gravity that replicated the conditions of Earth. In Dr. Janhunen’s theorized settlement, instead of traveling in a ship, people would live in disks attached to the main structure orbiting Ceres. This general idea has appeared frequently in other sci-fi works. Recent examples include Interstellar and Elysium. It’s also part of a planned space hotel. And with good reason. The spinning concept has been theorized for more than a century, because there’s real science behind it. And human bodies would continue to grow normally thanks to the simulated gravity.

The station would use Ceres’ nitrogen to create an atmosphere around the space settlement. Mirrors attached to the station would provide sunlight for the habitants. And at the proposed size, which is five to six times larger than even some of the densest urban centers on the planet, settlers would have plenty of room to grow and garden. That would be possible by accessing Ceres’ abundant natural resources via a far more cost effective method than rockets. The settlement would use a space elevator. Yes, a space elevator.

“To enable gardens and trees, a 1.5 m thick soil is used. The soil is upgradable to 4 m if more energy is expended in the manufacturing phase. The mass per person is 107 kg, most of which is lightly processed radiation shield and soil. The goal is a long-term sustainable world where all atoms circulate. Because intra-settlement travel can be propellantless, achieving this goal is possible at least in principle. Lifting the materials from Ceres is energetically cheap compared to processing them into habitats, if a space elevator is used. Because Ceres has low gravity and rotates relatively fast, the space elevator is feasible.”

It won’t be easy for mankind to find a new home. It might have to build one itself at enormous cost and risk. But it will be worth it. Not only because will we explore the cosmos, but because we’ll get a space elevator out of it. That’s one sci-fi dream we want to see become a reality.