Nisio Isin is a Japanese novelist whose works have gone on to become some of the most prolific anime in recent years from Katangatari, to Madeka Box, to Monogatari. His most well-known adaptation, the Monogatari series, has garnered consistent critical acclaim abroad but, as is usually the case, hasn’t gotten much love stateside.

This is tragic because Monogatari is one of the most distinctive series I’ve come across in years, and I’d like to take a moment to break down why this show, for all its strengths and failings, is worth a watch.

What’s It All About?

The long-running Monogatari series tells the story of Koyomi Araragi, a high school boy who has been restored as a human after a brief, unpleasant stint as a vampire. Despite attempts to resume his normal life, Araragi finds himself entangled in the lives of various oddballs (usually ladies), who have their own supernatural and psychological monsters to deal with. The definition of a white-knight, Araragi can’t help but help, even when these supernatural aberrations put his life and relationships at risk. Things get weird, funny, horrifying, and perhaps a little heartwarming, very quickly. 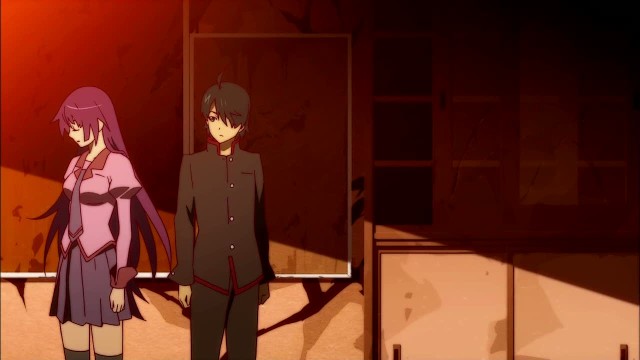 What Makes It So Unique?

First and foremost, the dialogue. The series has some fantastic action pieces but they’re not the main draw. Rather, Isin is very much a Tarantino-styled writer; his characters will not shut up and you’re glad they don’t. Unlike most series where dialogue is just awkward filler, in Monogatari, it is critical component of characterization and storytelling.

Banal chitchat reveals hidden personality traits and character motivations. Comedic wordplay abounds. A confrontation in conversation can be just as intense and frightening as any of the series’ smackdowns. When it comes to monologs, Isin’s writing can show incredible wisdom and pathos. In a medium where dialogue has become exposition dumps and clumsy confessions, it is refreshing to see it used with variety of purpose, and if you can stand talking heads, Monogatari will impress. 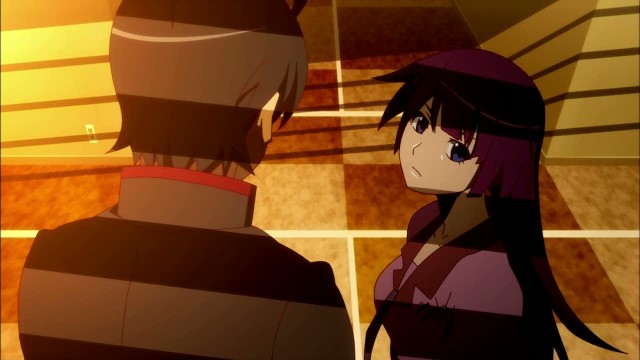 Of course, it’s not just Isin’s words that made the series stand out. Monogatari has the incredible visuals of Studio Shaft behind it. What separates Monogatari from other gorgeous anime is how cinematic the series is in a technical sense. Monogatari emphasis on the backdrop of a scene, how each image is framed, where characters are positioned, and what the camera chooses to focus or cutaway to places the visual context of a scene on the same level as what the characters say.

While anime films do this constantly, very seldom do series use the principles of cinematography to tell their stories. It may be something only film nerds such as myself appreciate, but even the casual viewer can still enjoy that every shot of Monogatari is an evocative treat for the eyes. 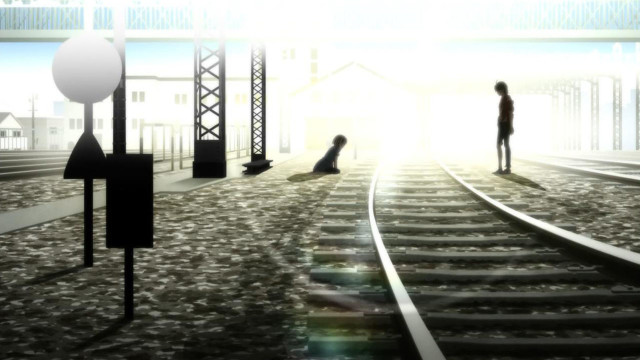 The last major piece I want to highlight is that Monogatari is a challenging show. This is not statement to belittle more entertainment-centered popcorn anime: there is place for it. I will not, however deny that there is an oversaturation of shows that only ask you to park yourself in front of the screen, free to conk out, and still get about 80% of the plot.

Monogatari is not a show for the passive. Missing a line of dialogue can lead you to miss a critical turning point in the story. The weaving, out of order storyline asks viewers to think, to pay attention to what characters say, and then make connections over the course of four seasons. Sometimes characters will outright deceive the viewer, and force them to think hard on if what they are being told is actually the truth. 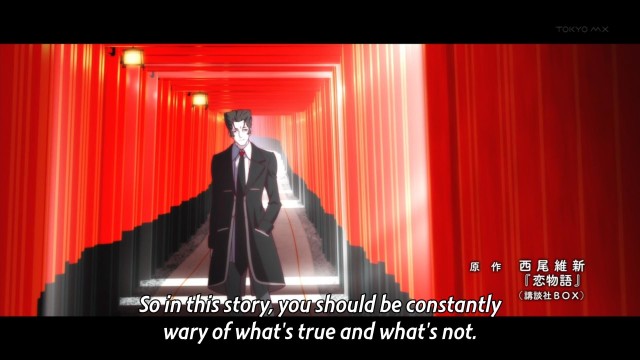 The show may portray the supernatural but it parallels or outright addresses real world issues: sexual assualt, depression, child abuse, bullying, and being queer. Isin’s writing is upfront about these issues, and the narrative does not apologize for its harsh critiques of perpetrators of such suffering AND those who refuse to take responsibility for their own pain.

The show is also relentlessly brutal. At one point in the first season, Araragi is disemboweled. Later seasons have him torn in half and his skull bashed in. The violence creates a jarring dissonance between its sophisticated story and cheeky humor, but meshes perfectly with the series horrific undertones. It isn’t for everyone, but these moments are essential to Monogatari‘s many, many storylines. They can also be bloody fun to watch. 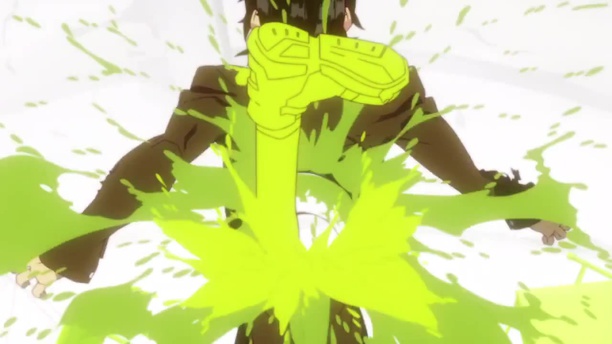 Monogatari is not a show to be watched casually. I’d compare it to films you find in the Criterion Collection, not in terms of quality, but simply the fact that it is too dense, too complex, too powerful to be watched half asleep or from behind a cellphone. I can’t think of too many other shows in past seasons that have asked so much of it’s audience, but it’s something I always believe is a good thing.

So If The Show’s So Great, Why Isn’t It More Popular?

I cannot read the hearts and minds of the anime masses. I can never truly know the factors that made Attack On Titan a smash, and Monogatari a cult hit. What I do know, however is that Monogatari is very flawed, and those flaws make it a very tough series to approach.

First and foremost, the series is hedonistically excessive. Recently, the anime medium has come under attack for pandering to a number of vices: ramped up fanservice, oogling characters under a certain age, squicky “big brother, little sister” dynamics, and everyone’s favorite, the harem trope. Alone, they can make certain shows distasteful. 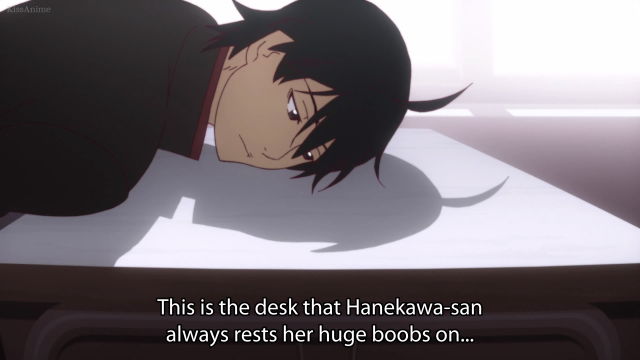 Combined together, you get Monogatari. The show shamelessly panders to the worst vices in the medium, thoughtfully critiques itself for such pandering, then proceeds to pander again with twice the enthusiasm. At times this excess can be funny, at other times it can be an obnoxious blight on what is usually very smart, serious, and heartfelt show.

Next to this, you have a show that is long running and variable in quality. Monogatari currently has four seasons (as lumped together on Hulu): Bakemonogatari, Nisemonogatari, Monogatari Season 2, and Owarimonogatari. Each season is made up of 2 to 3 arcs or storylines that all tie together, and not every storyline (or even season) is created equal.

For myself and many others, the 12 episode Bakemonogatari is the highlight of the series. It is the most coherent, has a grounded, heartwarming arc at its core, and has the least amount of excess. Nisemonogatari and Season 2 are more random, cranking up the excess while lowering the overall quality of the show, except for select storylines that are absolutely fantastic. Owarimonogatari brings back the consistency of the first season, but it makes no damn sense without seeing everything else thus far. 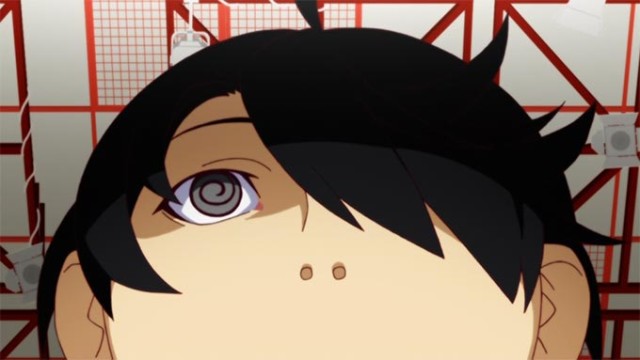 Have your eyes glazed over yet? Good. Now you understand why it is so hard to get people to watch. Why deal with a narrative tornado when you could just watch teenagers kill Titans instead?

I won’t recommend Monogatari for everyone. I can’t. It is a long term endeavor, akin to trying to get a friend go through all of the new Doctor Who, or watch movies from the Criterion Collection. However, if you are an anime veteran looking for something different from the standard seasonal fare, I can’t recommend Monogatari, or at the very least the 12 episode Bakemonogatari, enough. The series may be flawed, but it is a show that goes up against the status quo of the medium, something that any form of entertainment always needs. 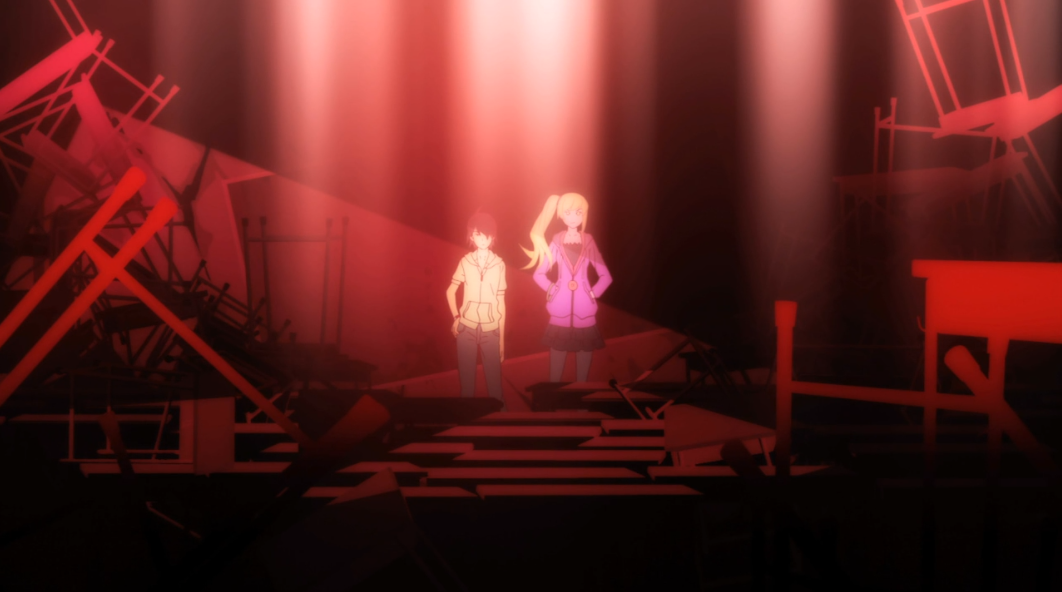 You can find Bakemonogatari, and the rest of the Monogatari series on Cruncyroll and Hulu. Feel free to share your own thoughts on the series or anime recommendations in the comments below.