This Week's THE WALKING DEAD Was a Lot Like LOST - Nerdist

Right upfront, we should note that The Walking Dead this week probably should have come with a trigger warning, as it went darker than anything the show has delivered since Glenn got his head caved in. The theme of the episode was a whole lot of lost and found, but boy, did that loss get seriously bad before anything remotely good came out of it. 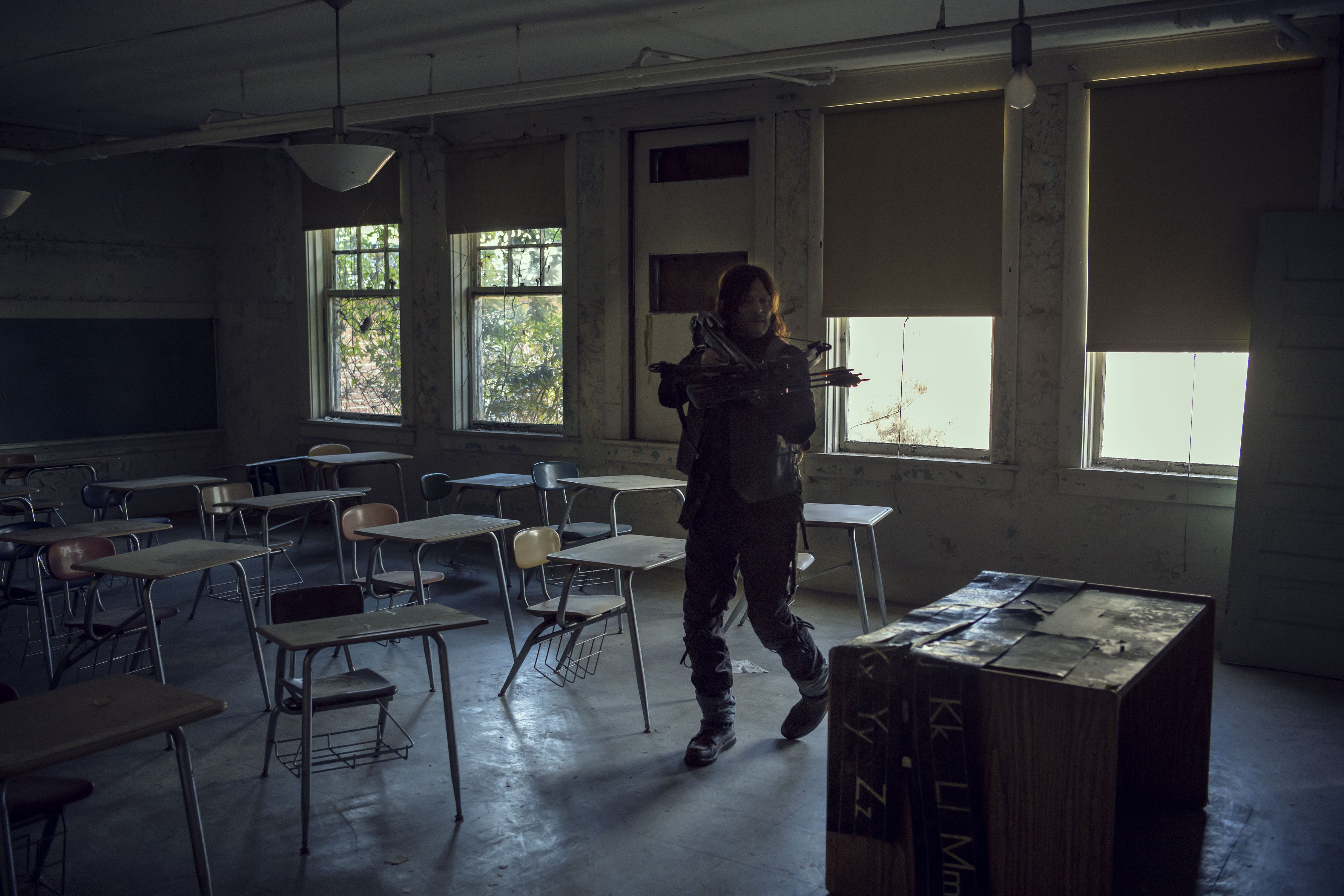 Not only was there a general sense of things being missed and searched for, but this week’s episode was, perhaps most strikingly, structured like an episode of Lost. It’s not just that there was equal time given between flashbacks and present day moments (the Carol-Ezekiel quest for a projector bulb episode did this too, without revealing the point at the time), but that the flashbacks directly informed the character moments and emotions that came into play further down the timeline.

We’ve known since the time jump that Michonne has become estranged from the other communities; now we know specifically why, and it isn’t because of any characters we’ve seen before. Rather, it’s a long-lost college friend named Jocelyn who inexplicably shows up on her doorstep one day. She proves to be an utterly terrifying adversary in precisely the way Alpha has not been so far.

We also got a better explanation for why Daryl lives out in the woods now. He’s still looking for some trace of Rick, undoubtedly feeling latent guilt for opposing him during his last days with the community. Michonne initially continues the search as well, but she learns by episode’s end that protecting what you have is more important than a fruitless quest for what you’ve lost. The next step is figuring out that there’s more to protect than her single-mindedness allowed her to perceive. And the resounding message of this episode and the entire season so far remains: always listen to the damn kids; they’re smarter than you! 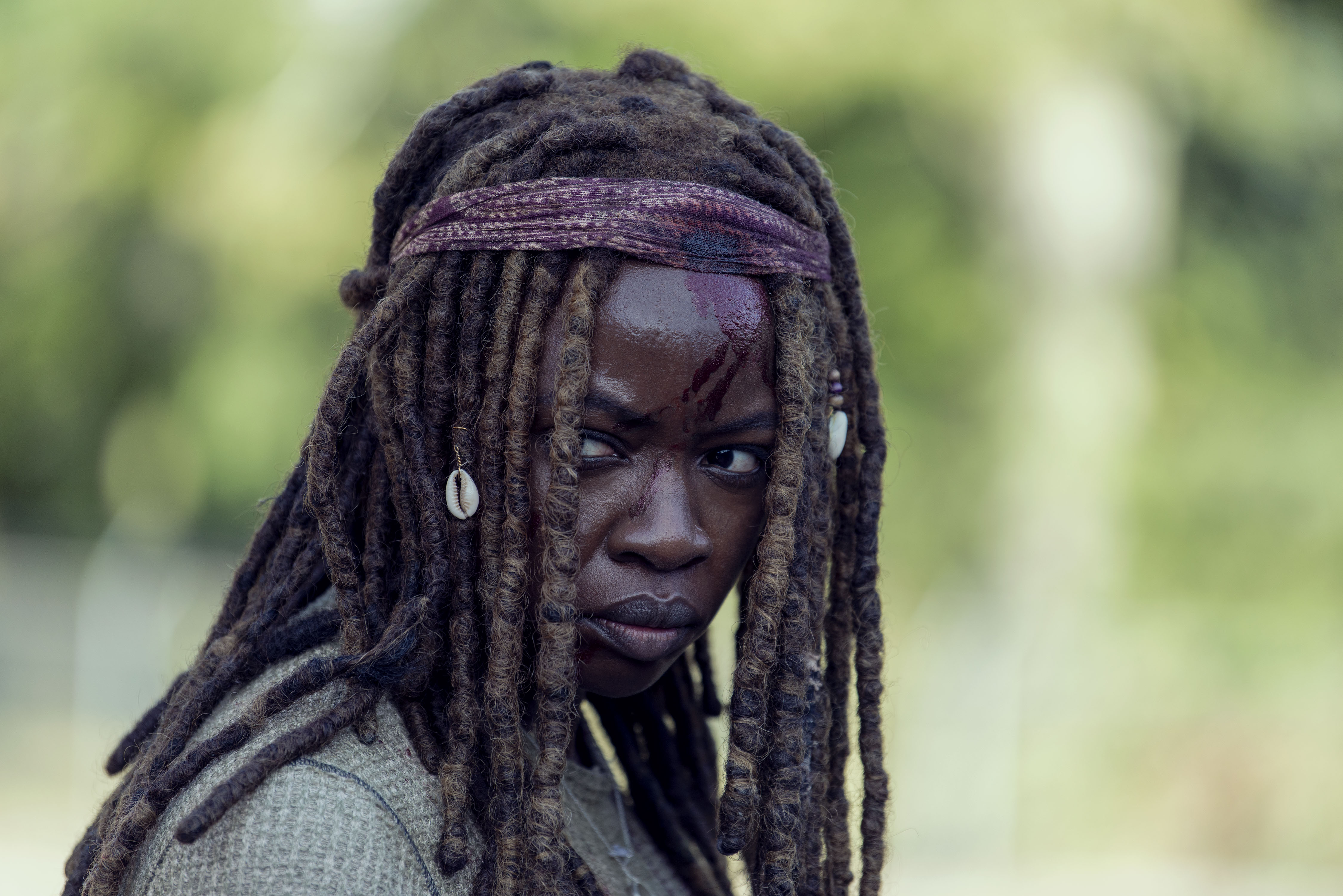 But after two victorious, parallel-timeline quests to find a disappeared Judith, is Michonne too far gone in a way she cannot recover from? She and Daryl bear literal scars after being branded by Jocelyn’s Lost Boys-like gang of thieving, murdering children. The scars represent more than just injured flesh, however. After having her pregnant stomach slashed (!!!), and fearing for Judith’s life, Michonne massacres the kids with her katana, a taboo even most slasher movies shy away from. Yes, they were bad kids, but this is essentially what cemented Anakin Skywalker’s turn to Darth Vader. We know Danai Gurira is leaving the show soon; while there could be a hope of spinning her off into yet another show or movie, her deeds this week got so dirty that a noble sacrifice might be narratively required for redemption.

It’s really too bad Jocelyn was also a casualty; for a one-and-done villain, she was scarier than some of the longer-term foes we’ve encountered over the years, and did some real damage to our heroes. It doesn’t get much nastier than an utterly remorseless manipulator of children, capable of acting completely traumatized and innocent when she needs to. Her emotional mask earned more chills than the zombie masks we’ve been seeing the last few weeks, with actress Rutina Wesley’s stone cold performance was easily the week’s high point (you may remember her as True Blood‘s Tara). She wasn’t just long lost from Michonne’s life, but long since disconnected from basic humanity too.

There’s something vaguely icky in the concluding moments of the show, when Michonne realizes that even at such a young age, Judith is perfectly capable of compartmentalizing situational morality in the post-apocalypse world. In her own way, Rick’s little girl is not that different from Jocelyn’s kids, but she does have at least one thing they don’t: a sense of moral imperative to protect everyone you love, and not just immediate family. That’s what Michonne has had to find all this time, regardless of whether Rick ever shows up again.

And who told her so all along? Negan. If he can find his humanity again, maybe all is never lost. Though I’m certainly rooting for more episodes that are.

Luke Y. Thompson has lost and found more things in his own home than you can possibly imagine. Follow him on social media to see some of them.