Love miniatures games?  So do we! If you’re looking for tips to get your miniatures table-ready, be sure to tune into our show, G&S Painters Guild, exclusively on Alpha for lessons and tip for getting your minis looking the best they can.

Around these parts, we’ve been loving Necromunda – Games Workshop’s skirmish game of urban combat set in the universe of Warhammer 40,000. The game features various gangs and GW has been releasing expansions and new model kits, with the most recent being the Van Saar Gang.

If Elon Musk was a ‘Munda ganger – he’d belong to House Van Saar. These are the warriors making up the techno-elite, at least among the slumlords of the Hive. They go to battle wearing luminescent body armor and wielding arms of complex machinery. Every juve lugging around a stub pistol with ammunition manufactured out of a bathtub shivers upon seeing the approaching wall of energy shields.

Energy shields? Yeah, those of us who became indoctrinated to Necromunda in the 90s are in for a bit of a surprise. While these are your grandpappies Van Saar, they’ve arrived in this new edition of the game with some slick new tricks. They wield shields of incandescent light and shock weapons, alongside the trusty plasma cannon of course.

One of the primary design traits that we continue to see exploited is a reinforcement of flavor. Necromunda was never short on delicious setting – a world packed full of mohawks and crumbling industrial infrastructure – but we see those tendrils working their way through supplementary material with each new release. This is seen mightily in the new softcover Gang War III booklet. 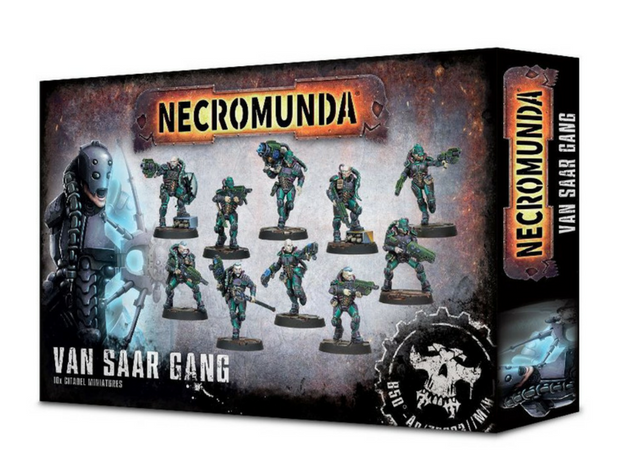 This manual includes rules to field the Van Saar as well as a wealth of new options for every gang to explore. On the basic side of things, we have expanded equipment lists for all of the gangs thus far. This is a needed feature with each release as it cuts down on referencing multiple manuals and maintains a consistently updating master trading post list for shopping.

On the new side of things we have a plethora of slick expansion material. There are rules for purchasing massive robots to accompany your gangs, you can acquire animals and pets to help hunt the opposing dregs, and finally we can acquire luxury goods and implants for the leaders of our forces. The way they’ve tied the material in each new book with the gang accompanying the wave (technological upgrades and additions in this instance) is pretty clever and makes for a unifying theme to the material.

Amid all of these new options are little nods and winks towards old material. We saw this some of the scummers in previous Gang War supplements, and this continues to be a key feature of this new serialized product line. Gang War III will put a smile on the face of old-timers with the inclusion of rules for Mad Donna. Yes, the wild rock star of a butcher is back and she’s ready to claim scalps. 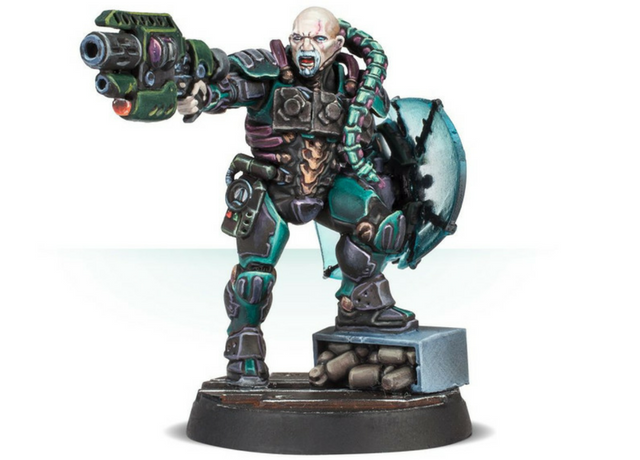 Perhaps underrated, but one of the most significant inclusions in this new wave is the expanded campaign material. There are suggestions and details on running multiple types of campaigns which will satisfy those starving for continuous play. The suggestions on utilizing an arbiter (player basically running things in a manner similar to an RPG campaign) brings the game full circle to one of the most fantastic formats of the original edition.

I’m also enamored with some of the small touches found within, such as the “House Favor” chart. This allows you to petition your house for aid at the start of each campaign cycle. This is fantastic because, again, it reinforces the setting of Necromunda and instills color with little overhead.

In addition to all of this campaign support, there are 10 new scenarios that can be utilized in one-off fights or in those extended games. Some of these are very clever and feature a suite of unique rules to tease out the most from each play. You will hunt beasts, scavenge archeotech, and harvest spook. Everything’s wrapped up with a couple of scenarios where more than two gangs participate, including advice on how to run games of this size.

While I’m not in love with the compartmentalization of rules between all of these supplements, I do have to tip my hat towards Games Workshop for making it work. They continue to offer consolidated equipment lists, as well as push the boundaries of what the game has to offer. With each new release the world expands in multiple interesting vectors. Most importantly, none of these feels mailed in or as merely fan service. All of these new options are exceptional and promise to push your games of Necromunda into wild new directions.

Have you played the new Necromunda yet? Let us know in the comments! And tune into our show, G&S Painter’s Guild on Alpha for lessons on getting your miniatures looking their best. Get a free 30-day trial at projectalpha.com!