A Poignant THE TRIP TO GREECE Makes the Whole Series Better

Before watching The Trip to Greece, I couldn’t understand why it would be the franchise’s final film. These don’t exactly seem like slogs to make. Why would anyone voluntarily end a series that involves shooting in beautiful locales and eating amazing food, especially when fans like me would watch them forever? Then I saw the movie and it all made sense. It’s the best entry in the series—a funny, touching tale about family, life, and death. But it wouldn’t have been possible to tell this exact story unless they knew it would be the last.

And that’s why it’s not just a beautiful ending unto itself. The Trip to Greece gives the entire franchise a new emotional weight that makes all the time we spent with these two people more rewarding.

The Trip franchise has never been about plot. It’s about hanging out with two funny comedians who don’t exactly like each other as they discuss their lives and careers over lunch. All with some celebrity impressions mixed in. But Brydon and Coogan’s last culinary jaunt uses structure in a way the other three films didn’t. Over six days, they retrace the steps of Odysseus’ decade-long journey home in The Odyssey. That parallel path gives their adventure a metaphorical resonance not fully realized in The Trip to Spain when the pair retraced Coogan’s own journey as a young man.

Here, the comparisons of their own ten-year odyssey to the famed Greek hero’s difficult struggle home deftly contributes to the film’s themes. The Trip to Greece is a poignant story about what it means to go home after a long time away, and ultimately what it means to face death itself. Odysseus wanted fame and glory, but it cost him two decades with his wife and son. Brydon and Coogan ultimately end up representing both sides of Odysseus’ own conflicting desires. Rob spends the film missing his children and wife, while Steve doesn’t go home to see his sick father or comfort his son serving as solitary caretaker. 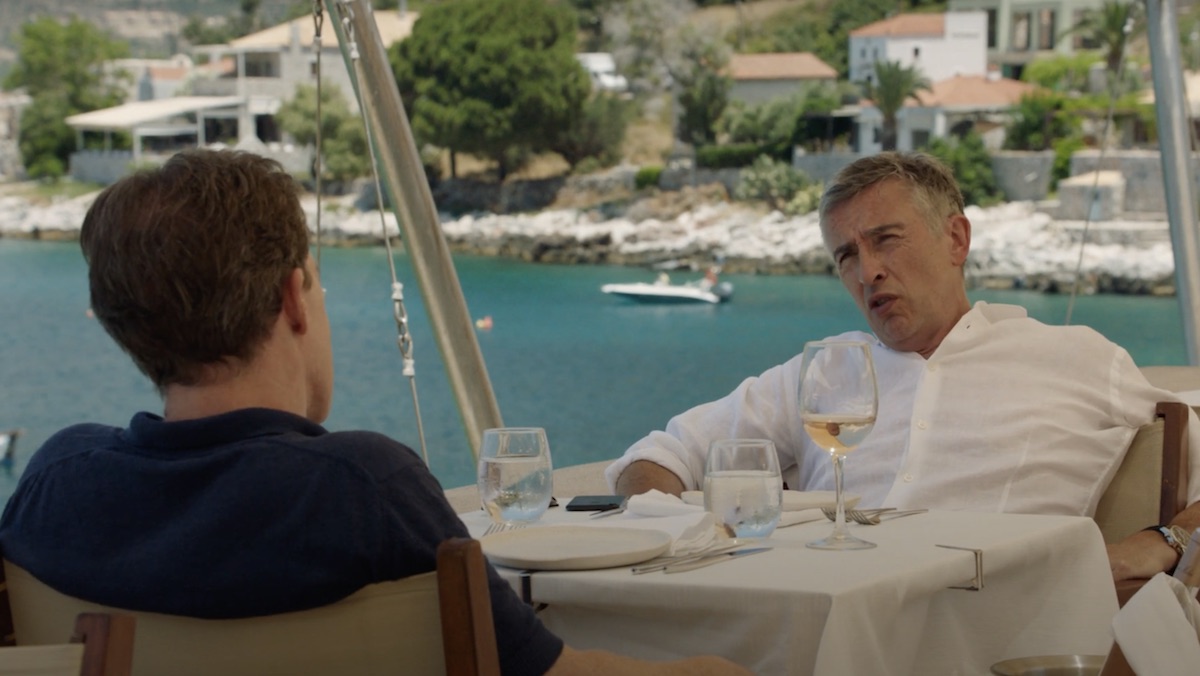 It’s a fitting end for both, bringing their stories full circle to when we first met them in the original film a decade ago. Steve’s concern with fame, fortune, and BAFTAs has always made him sacrifice his personal life for professional pursuits. While less famous, Rob has always had a loving home to return to. The pair swapped roles over the course of ten years, as Rob cheated on his wife in Italy and ran away to Spain to get away from his kids.

But ultimately in The Trip to Greece, they end up getting out of life what they put into it. Rob’s story ends in his wife’s arms. He literally tasted the bountiful feasts of fame and realized they weren’t as satisfying as true love. Steve ends his story alone in the car. He knows he failed his father and his son because he refused to leave behind a job that might make his Q-rating marginally higher.

The Trip’s final entry reminds us all of our decisions have consequences we will have to face eventually. We can’t escape who we are and what we’ve done. And the older we get, the more we’re forced to grapple with those fallout of those choices. That’s true if we run off to war like Odysseus, and it’s true if we waste time vainly trying to out-swim an old frenemey rather than rushing back to our father’s hospital bed. 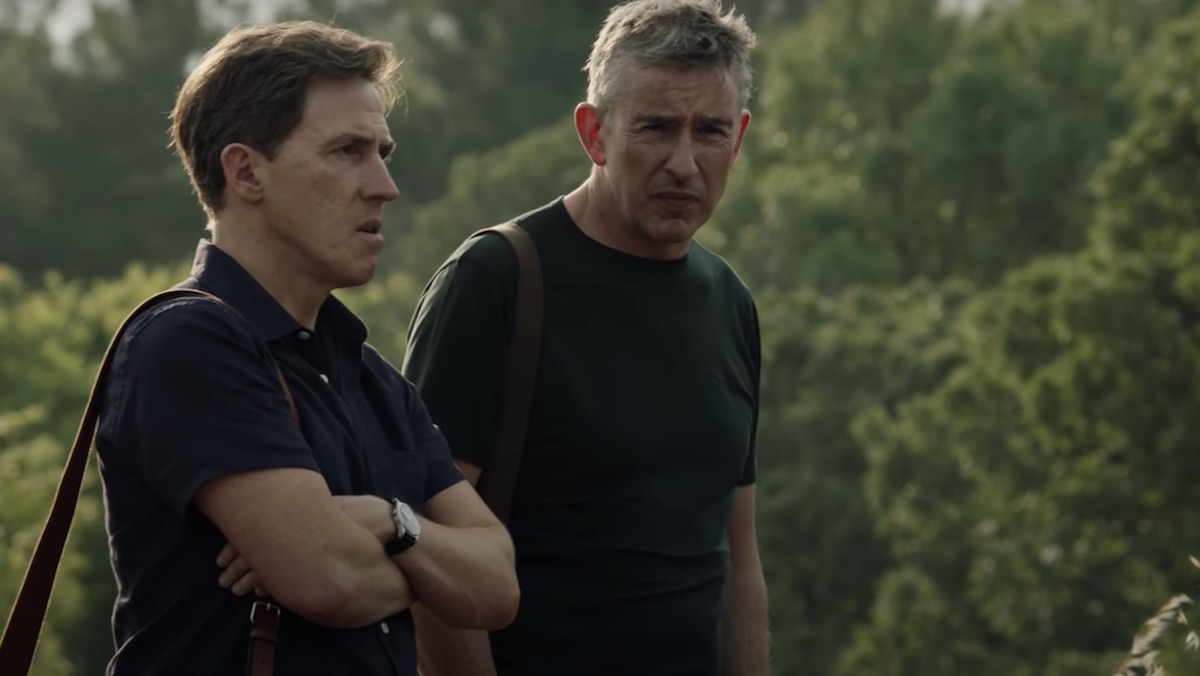 There’s a melancholy that permeates the film long before Steve learns about his father’s death. It’s as though both characters somehow know this will be their final time together. Ten years ago, they were two men who didn’t really like each other. Now they wear matching hats. They know the other’s shortcomings well enough to accept—and appreciate—them other for who they really are. They still don’t really like each other, but they do love one another. They’re like an old married couple. They’re like family. And the sad truth is that we inevitably have to say goodbye to those we love. 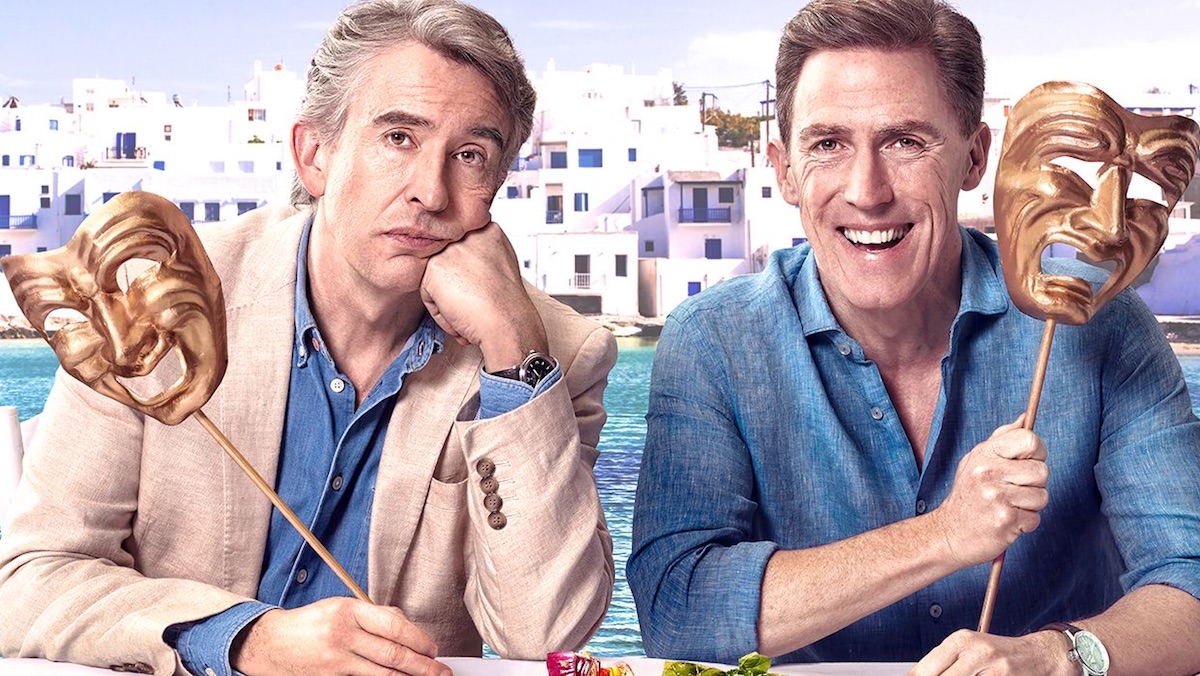 All vacations come to an end. So do all wars and film franchises. But just like Odysseus learned, a journey would be meaningless if it didn’t end. I wanted Steve Coogan and Rob Brydon to make these movies forever, but they couldn’t have made this movie, their best, unless they knew it was their last. And by making The Trip to Greece a contemplation about endings itself, it made all the films they gave us a more rewarding trip than ever before.