Dungeons & Dragons was a hit phenomenon in the late 1970s that spawned several imitators, offshoots, and similar designs. Most of these games focused in the same genre of fantasy as the original, but it didn’t take long for gamers to apply the idea of fantasy role-playing to other genres. When game designer Merle M. Rasmussen submitted his espionage game to TSR, the original owners of D&D in 1978, the company was looking to expand the genre out of the dungeon and into the world. The game eventually was released in 1980 as Top Secret. It was the world’s first spy RPG and it was a big hit for TSR in the early 80s.

Early supplements didn’t deviate much from the formula that D&D established. Assaulting an evil dictator’s fortress isn’t much different than exploring the dungeon of a mad wizard, but putting the game in the real world encouraged players to come up with solutions to problems that were clever instead of hoping for a cool magic item to get a group out of a bind. Over time, the adventures evolved into open-world settings where players could set their own storylines and the game evolved as well. Top Secret/S.I. was released in 1987, featuring a more structured setting of good-guy and bad-guy super spies that eventually included dips into other genres like pulp heroes and gritty superheroes.

After a nearly 20-year absence, the original creators of Top Secret are back in control with the upcoming release of a new edition called Top Secret: New World Order. The boxed set is a culmination of not just a reunion with Merle Rasmussen and his original editor Allan Hammack but also years of playtesting at conventions around the world. Rasmussen’s teamed up with a variety of talented individuals—including our own Satine Phoenix—to bring this spy classic into the modern era. 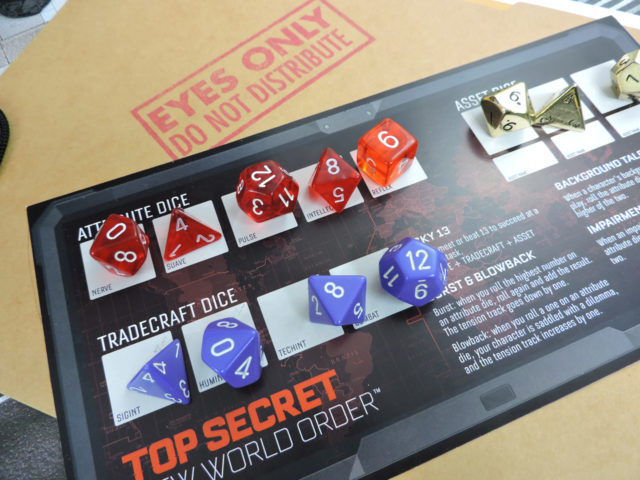 Each spy has their attributes and skills rated in die types. The bigger the die type means the better the character is at something. When the spy tries something exciting, they roll 1-3 dice, usually an attribute die representing natural talent, a tradecraft die representing espionage training. and an asset die representing a cool gadget or a weapon. The spy must beat a 13 on their dice roll or in some cases, like hand-to-hand combat, beat the roll of their opponent. Difficulty is reflected by increasing and decreasing die types, most often the asset. A pistol might have a high die type in a close quarters battle, but shooting down from a rooftop would reduce the dice used. Any dice that come up with their maximum number causes a burst: the character rerolls and adds the dice to the total or the GM (known in Top Secret games as the Administrator)  gives the player a neat additional benefit to the roll. If any dice come up as a one, the character suffers blowback. This is reflected in higher difficulty numbers or narrative trouble for the agent as things don’t go their way.

Rasmussen and TSR Games launched a Kickstarter on June 27th for fans who want to be the first to bring back this Cold War classic. For fans of the original game or for gamers who’ve only heard of it from their older friends, it’s an awesome opportunity to strap on a gadget watch, hop in a high-tech sports car, and save the world once more.

Who is your favorite secret agent? Let us know in the comments.