The Return of King’s Quest - Nerdist

The Return of King’s Quest 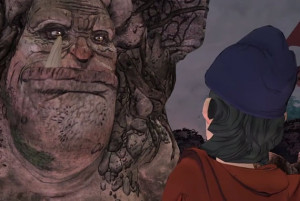 The chorus of “Hollywood has officially run out of ideas” is often sung at the first hint of the reboot, remake or re-imagining of a once beloved franchise but truth be told, these visits to the land of nostalgia wouldn’t be possible if there wasn’t at least some small part of us that didn’t want to return to the past.

When it comes to King’s Quest there are probably no such protests as this is more than a welcome return to one of the bright spots of computer gaming from a bygone era, and if all goes well, it has a chance to reach a new audience and help spark the ongoing revival of adventure games for the near future.

For those who not in the “know,” King’s Quest was a series of games first released in 1984 in the graphical adventure genre, existing primarily on PC’s which chronicled the adventures of Graham (later King Graham) and his royal family. The set up of the games was a graphical point-and-click interface in which the character would appear on screen against the backdrop of some fantastic scenario that the character by way of the player, needed to solve in order to advance. The character often had to visit multiple locations and gather items from other scenes in order to unlock a puzzle on a previous or future puzzle.

Created by Roberta Williams, King’s Quest was known for its fairy tale fantasy that used every aspect from whimsy, to high adventure to horror imaginable to create highly entertaining and magical landscapes that kept gamers coming back for more for decades. As time marched on, and graphic capabilities increased so did the level of engagement, culminating in King’s Quest VII, done in a Disney-like animated style. However, by the time the last installment arrived, the era of adventure games had all but come to a close as King’s Quest VIII (also known as Mask of Eternity) appeared at a 3D adventure-actioner which attempted to keep the puzzle aspects, but was obfuscated with the need to be both dark and fight-focused as many games had become in that time.

Fast forward to 2015 and enter Odd Gentlemen, a small design studio in Los Angeles who were tasked with reviving this 30 year old property, updating it, and making it relevant and fun for a new generation. The results so far looks as though it captures the best part of the adventure gaming, while fusing them with the capability to test your dexterity with more action oriented obstacles. Once again we get light hearted fun. Once again we get soft yet well-rounded characters, and once again we get modern fairytales told through the window of “Once Upon a Time.”

With so many of the bigger in-your-face franchises making their periodic return to our consoles, it’s both promising and fun to have such a light-hearted tale that evokes the best part of our imagination while challenging us with puzzles and thrusting us onward to not just act, but also think.

King’s Quest hits the Xbox 360, Xbox One, PS3, PS4 and will also be available on Steam.  What are some of of your favorite King’s Quest adventures? Let is know in the comments.