Is THE OUTSIDER's Killer Now Hiding in Plain Sight? - Nerdist

Is THE OUTSIDER’s Killer Now Hiding in Plain Sight?

Warning: This post contains major spoilers for episode four of HBO’s The Outsider.

The Outsider‘s fourth episode finally gave its monster a name—El Coco. This child-eating killer is known by many names though, as all cultures have their own boogeyman. He’s the nightmare parents warn their kids about to scare them into behaving. But this version of the creature is much more terrifying than even the one of folklore. This El Coco isn’t just a monster. It’s a virus. Killing a child is only the beginning. Its evil then spreads to the victims’ loved ones, so it can feed off their grief and suffering. You’ll never see him coming though, because he doesn’t have horns or a tail. It’s much worse than that. He looks exactly like your family and friends, which is why we might have seen El Coco hiding in plain sight in this episode. And that means we might know who his next victim is.

This episode showed El Coco in three flashbacks, each time in a different form. It was “Heath,” the nurse who cut Terry Maitland. It was also “Maria,” the woman Heath met in New York City. The fake “Maria” got breakfast and slept with Heath, which was how it was able to get Heath’s blood to become him. Holly met the real one in jail for murder. And we once again saw the creepy man in the green sweatshirt with a melted face. He took the van from Dayton, Ohio, to Georgia.

But where is El Coco now? Seemingly right in front of us. There appeared to be two different Detective Jack Hoskins in this episode. The real one has long bushy sideburns. His evil, child-murdering doppelganger does not.

This was the Jack Hoskins who shot a deer. His puffy white sideburns are hard to miss. 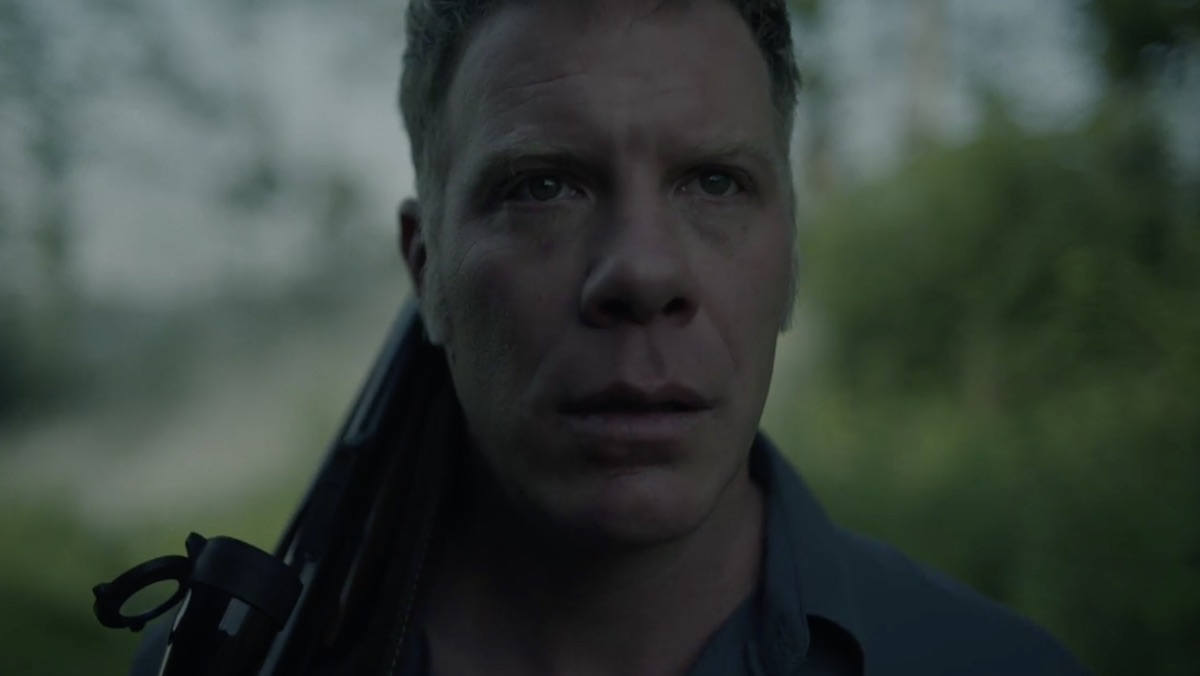 We know this is the real Jack because he still has the neck wounds from the ghost attack in the barn last week. 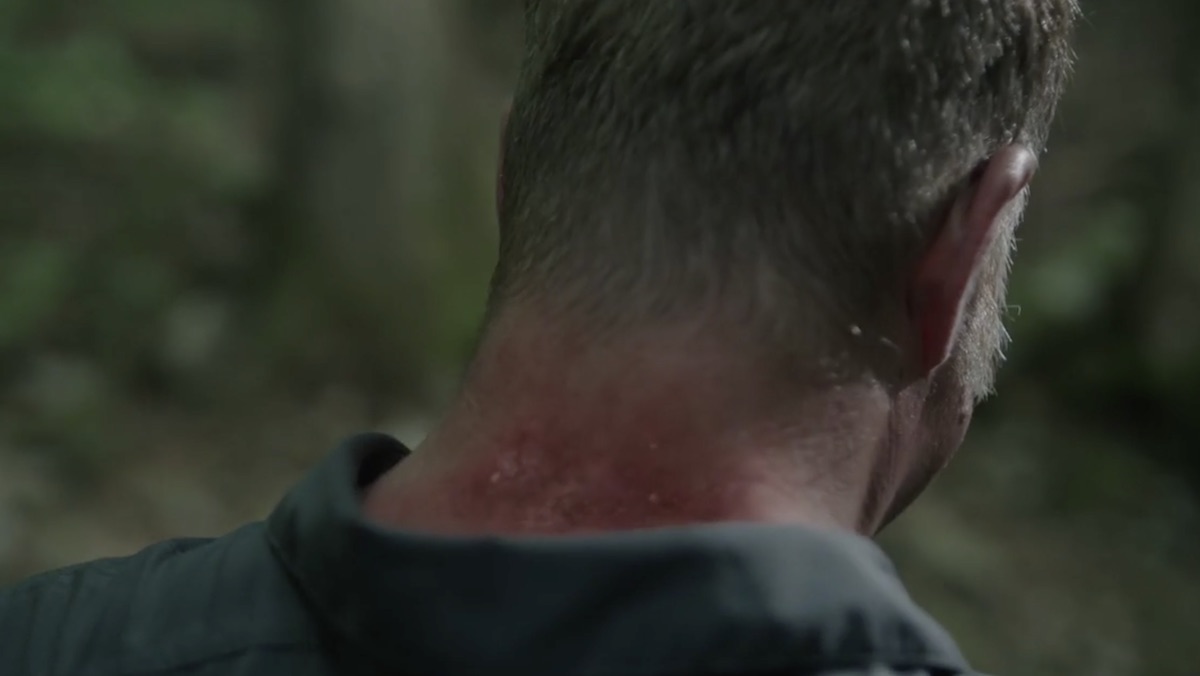 His sideburns were also easy to see when he pulled the dead deer through the woods. He left it in a clearing that would later be cluttered with random items. 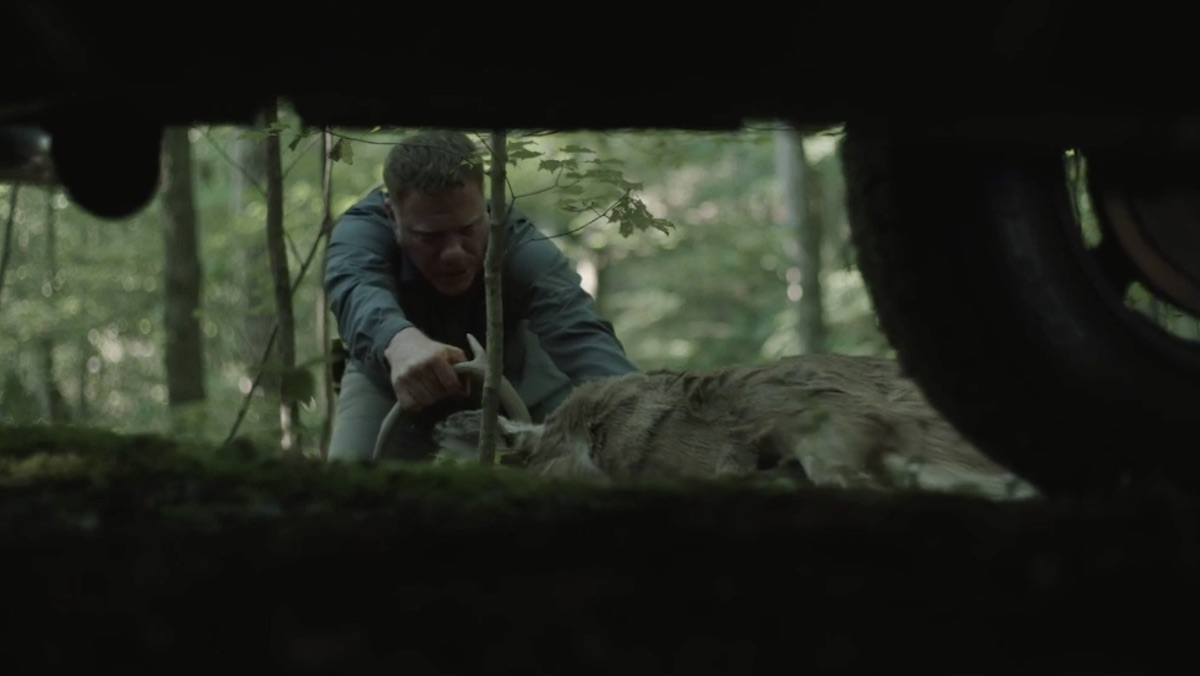 Jack Hoskins next appeared in an overly bright hardware store that touted its security cameras. It had signs featured saying, “Smile, you are on camera!” The fake Terry Maitland also made sure to be spotted on tape.

This “Jack” was no longer wearing the collared shirt he had on while hunting. He was dressed in a t-shirt and jacket as he purchased an eclectic collection of items. And his sideburns were short and neat.

They only came to the middle of his ear. 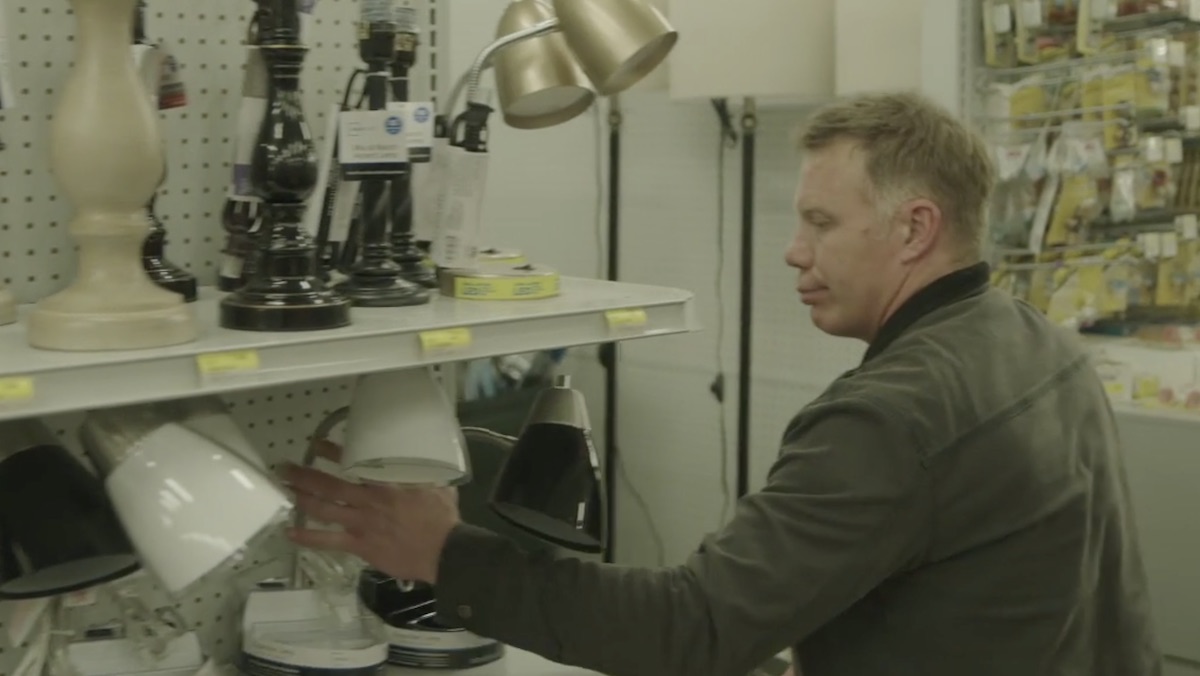 Jack got sweaty dragging the deer carcass through the woods. Did he simply shower and shave before he went shopping? It doesn’t appear so, because when he returned to the woods with his purchases, his long bushy sideburns were back. They went to the bottom of his ears.

What’s strange is this real Jack, whose neck scars are easy to see, was wearing the same clothes as the version we saw in the hardware store. 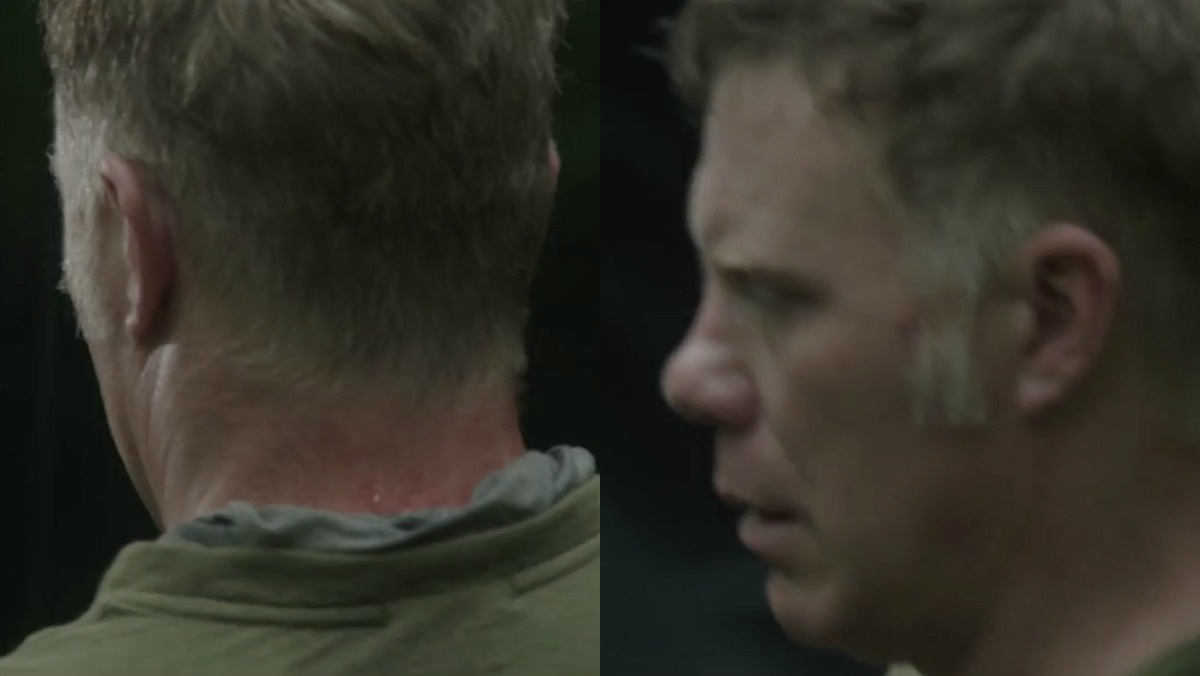 All of those items were placed near the dead deer, which had been eaten, just like Frankie Patterson and that hog were. But why would the real Jack put a bunch of items he didn’t buy in the woods? Maybe because it was the only way to stop the pain.

When the definitely real Jack collapsed in the strip club he spoke to his unseen assailant. “I’ll do anything, just make it stop. Just make it stop. Please,” he pleaded. If a supernatural ghost monster can turn into an exact duplicate of any human, it’s not a stretch to imagine it can cause someone to do its bidding for it. And Jack was so desperate that driving a van full of random items to the woods probably seemed like an easy price to stop his suffering. 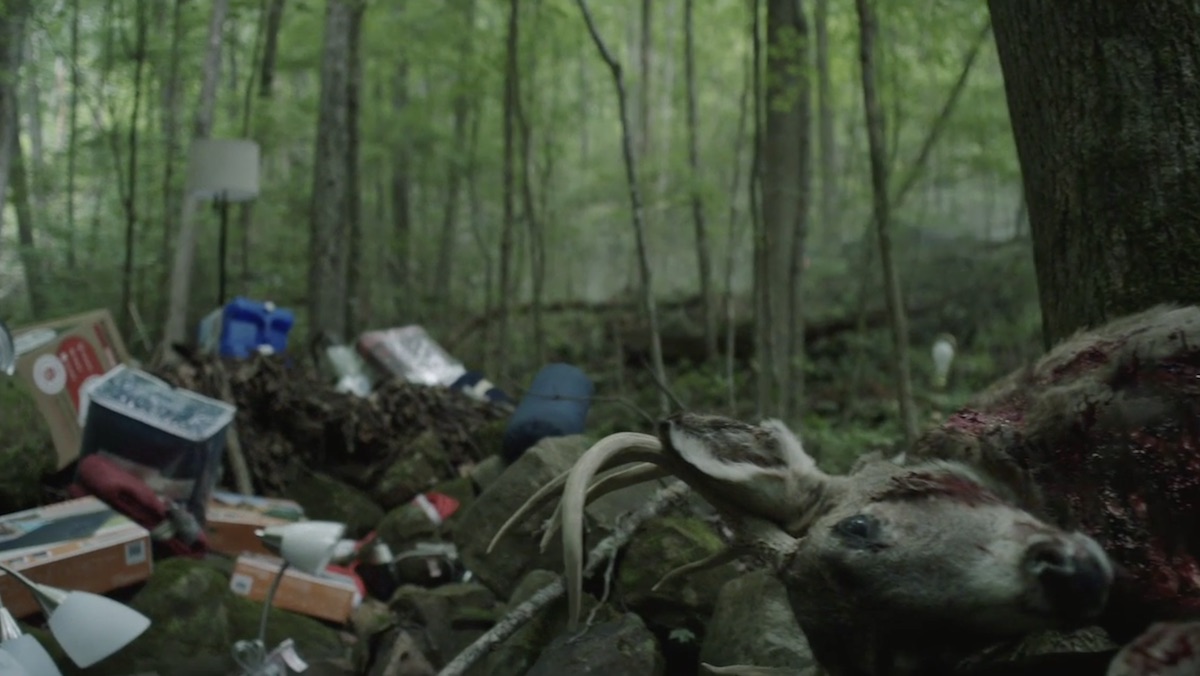 El Coco doesn’t just want to kill children. It wants to ruin as many lives and families as possible by framing innocent people for its horrible crimes. The real Jack Hoskins seems to be unknowingly helping this monster frame him. He thought he was just dumping junk in the woods. What he actually did was help set himself up when El Coco murders again. And “Jack’s” last scene could be the terrifying clue for who that child will be.

The last time Jack appeared in the episode he was at work. Jack’s a lazy asshole, but he seemingly knows how to do his job when he’s actually doing it. However, when detective Tamika Collins hobbled over to speak with him, Jack seemed out of it. He had been staring at an empty police report for far too long, like he didn’t know how to fill it in. 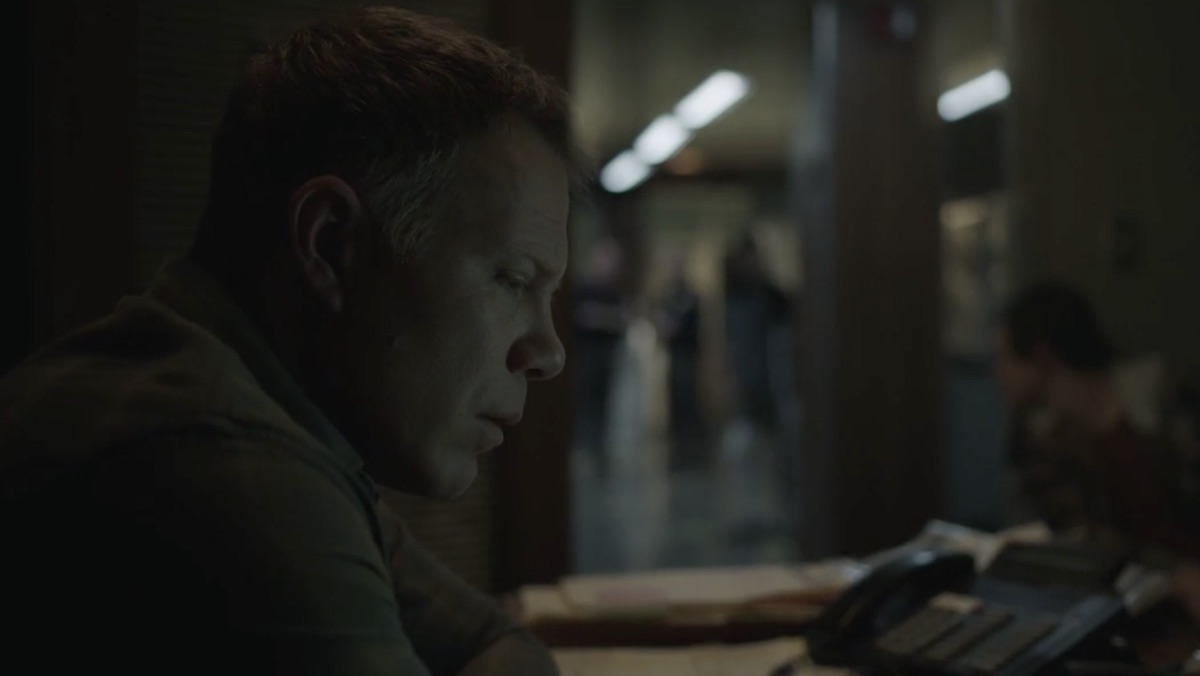 And what did Detective Collins, who recently gave birth, want to say to this Jack? “If you don’t make it to my baby party…”

“I’ll be there,” he answered with a smile, “I will be there. Guaranteed.” 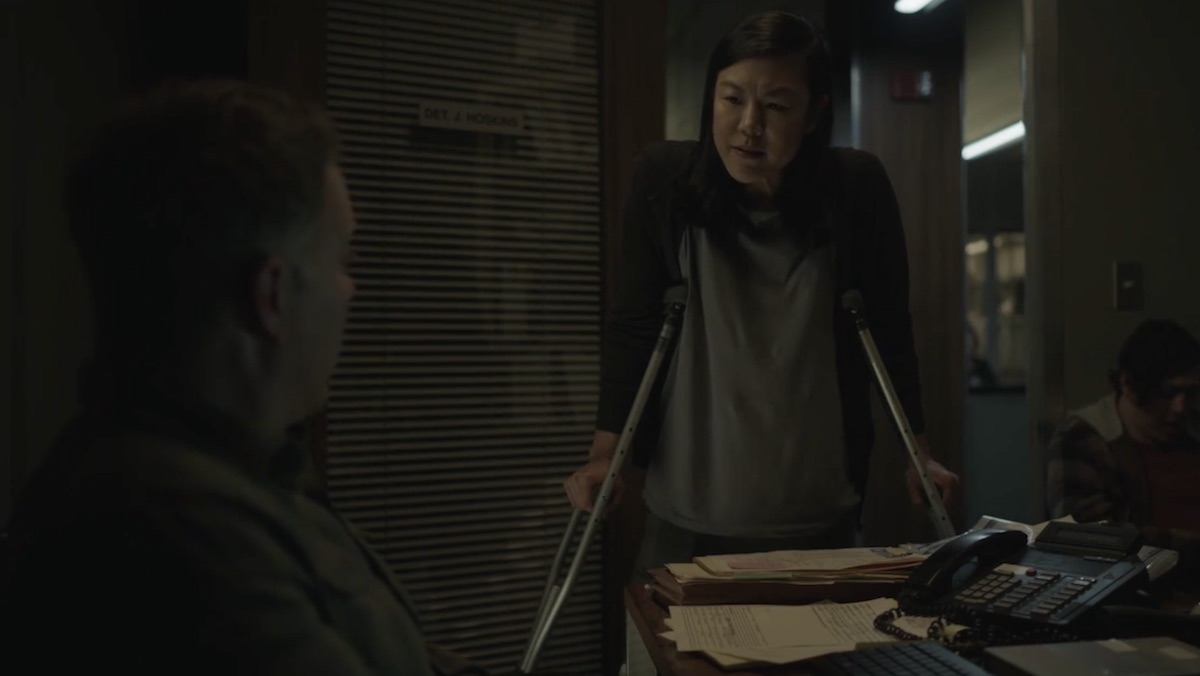 “The Man” warned Ralph Anderson to stop investigating the murder of Frankie Patterson. If he doesn’t “something very bad is going to happen.” Ralph already lost his only child to cancer though, so how can a monster who murders kids and feeds off their families’ grief get to him? By framing Jack for the murder of Detective Collins’ newborn.

El Coco isn’t terrifying because it hides in the shadows. He hides in plain sight, and sometimes you invite him into your home.