THE OUTSIDER: All the Evidence For and Against - Nerdist

THE OUTSIDER: All the Evidence For and Against

Warning: This post contains major spoilers for the first two episodes of The Outsider.

HBO’s limited series The Outsider is an adaptation of Stephen King’s best-selling novel. I don’t know anything about the story beyond what I saw in the show’s great first two episodes. Did Terry Maitland (Jason Bateman) really brutally murder a young boy? Plenty of evidence says he did. The problem is plenty of evidence says he didn’t. Here’s all the clues both for and against the Little League coach’s innocence so far, along with why none of it might actually matter. 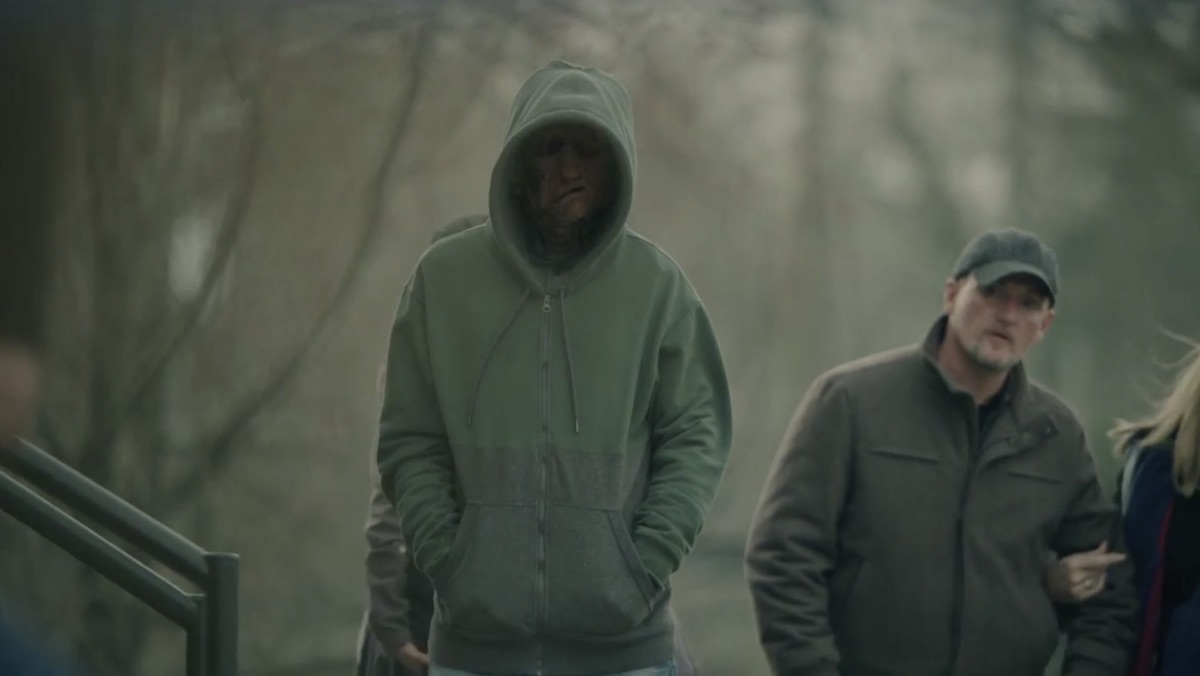 Police discovered Terry Maitland’s fingerprints, over 70 of them, on both young Frankie Patterson’s body and the white a witness saw him entering the day of his death. The boy’s bike, as well as the tree branch used to sexually assault him, also had Maitland’s fingerprints on them. Police also found AB positive blood, the same as Maitland’s, in the van, at the crime scene, and on the victim.

Most importantly, Maitland’s DNA matched the DNA from bite marks on Frankie Patterson. 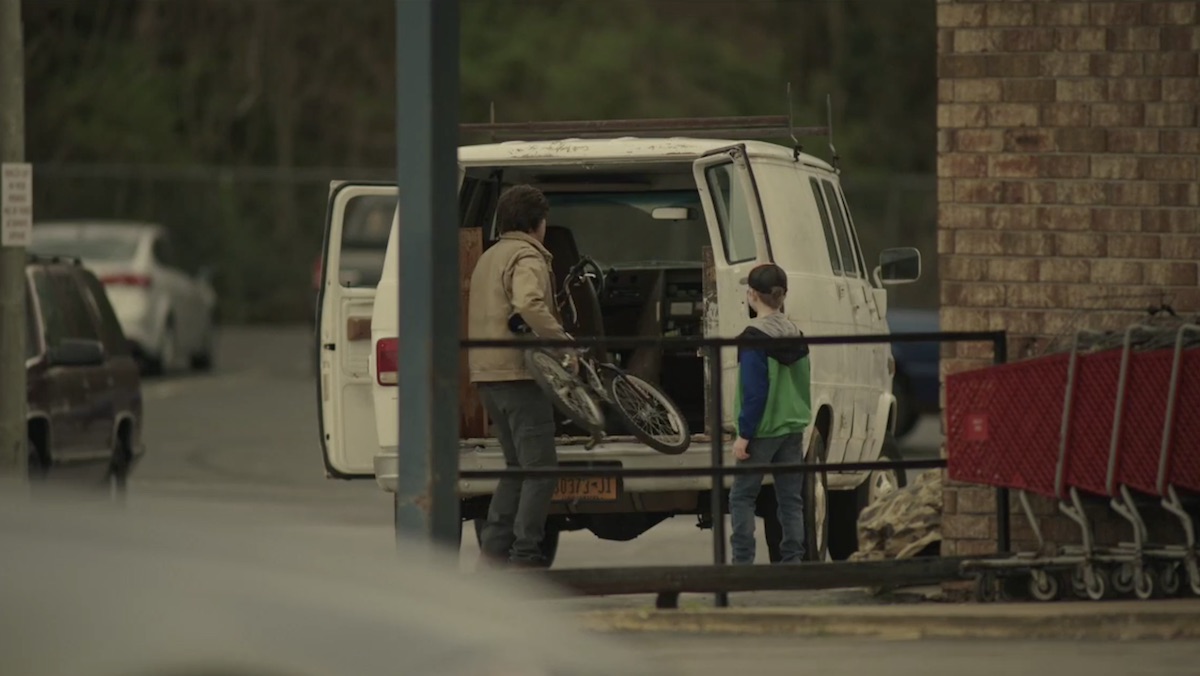 Four different eyewitness clearly and without equivocation identified Terry Maitland from the day of the Patterson murder, March 30. Mary the school teacher was the last person to see Frankie alive. He got into a white van, with out-of-state plates, driven by Maitland. She also saw the coach put the boy’s bike in the back. That happened at exactly 3:00 in the afternoon; she remembered because she heard the church bells play.

A young girl saw Maitland near the woods where Frankie was found. The coach’s nose and mouth were drenched in blood. He told her he had broken his nose on a tree branch. She saw him drive away in the same van. 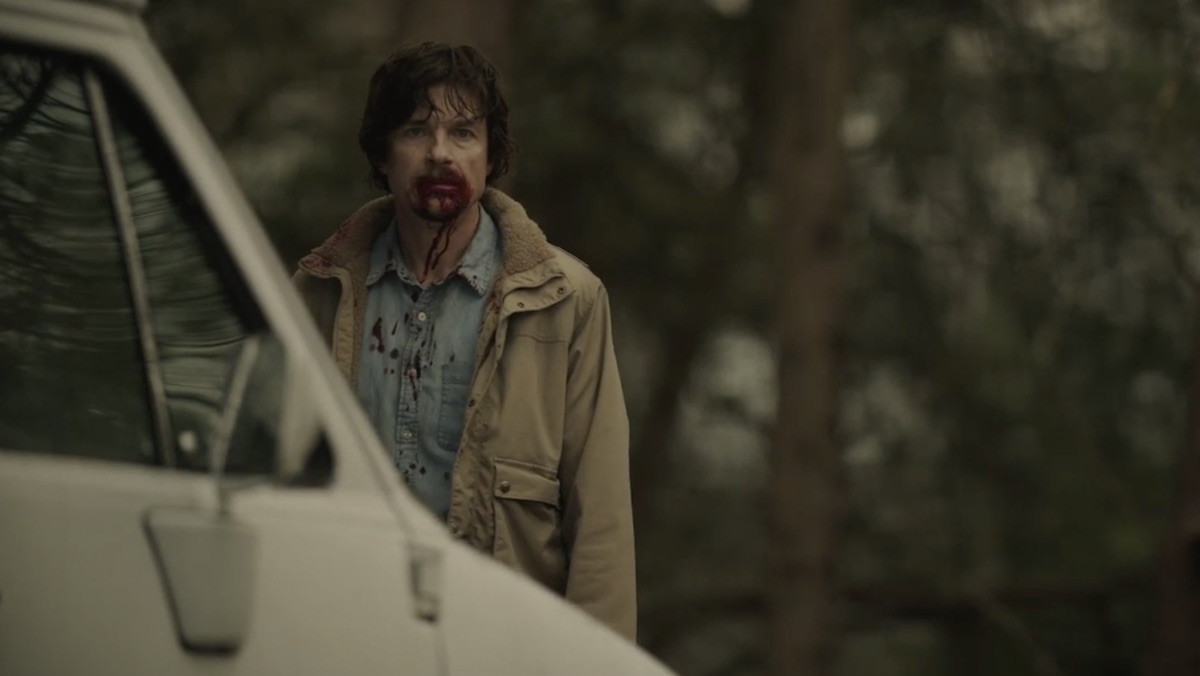 Claude (Paddy Considine) saw a still-bloodied Terry at his strip club minutes before 8:00 PM. The venue’s security camera captured this conversation. Maitland said he had broken his nose and needed to clean up before taking a taxi to a nearby medical center. Claude noticed the coach had blood on his back, which would have been hard to get from a broken nose. Terry was carrying a large brown paper bag. When he came out—clean—he was wearing new clothes: a white shirt, jeans, and a huge belt buckle. Those clothes were seen abandoned in a farm at the end of the second episode. It’s not clear how they got there or when. 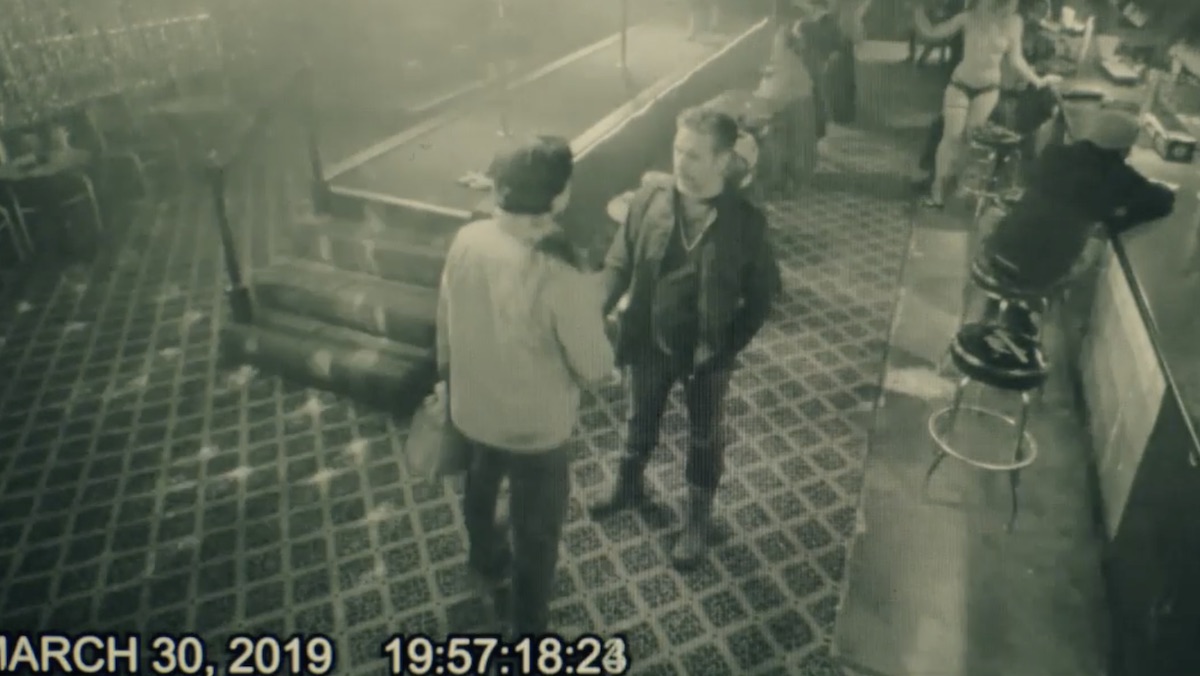 Taxi to the Train Station

A few minutes later on the night of the 30th, at 8:05 pm, Maitland got into a taxi outside the strip club. Like the other witnesses the driver instantly recognized him; seemingly everyone in town knew him. He made it a point to have her call in his fare, as if to create an official account of where he was and when. She thought he was drunk at first. But she couldn’t smell any liquor on him. She did notice his eyes though. 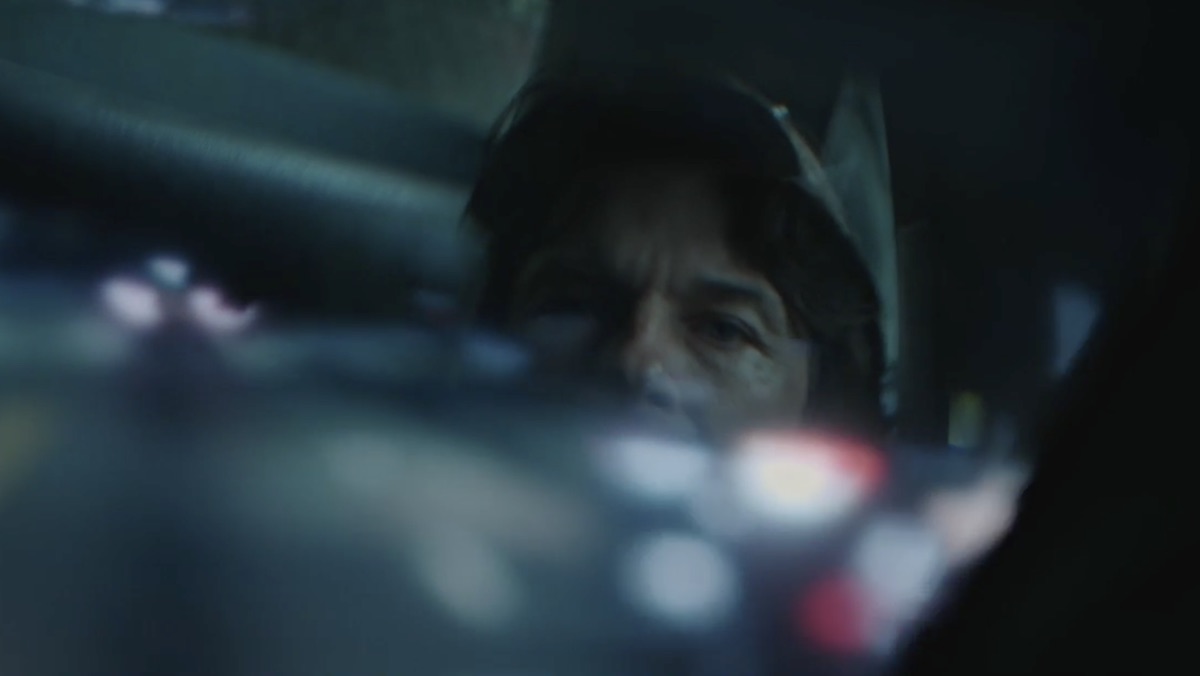 Maitland did not go to the nearby Urgent Care however. The cab dropped him off at the Amtrak station at 8:28. He never bought a ticket or got on a train like he claimed he was going to. He did seem to intentionally show his (blurry) face on the (grainy) security system, where he also flipped off the camera, before leaving.

Everything Terry Maitland did after allegedly killing Frankie Patterson makes no sense unless he wanted to be caught. 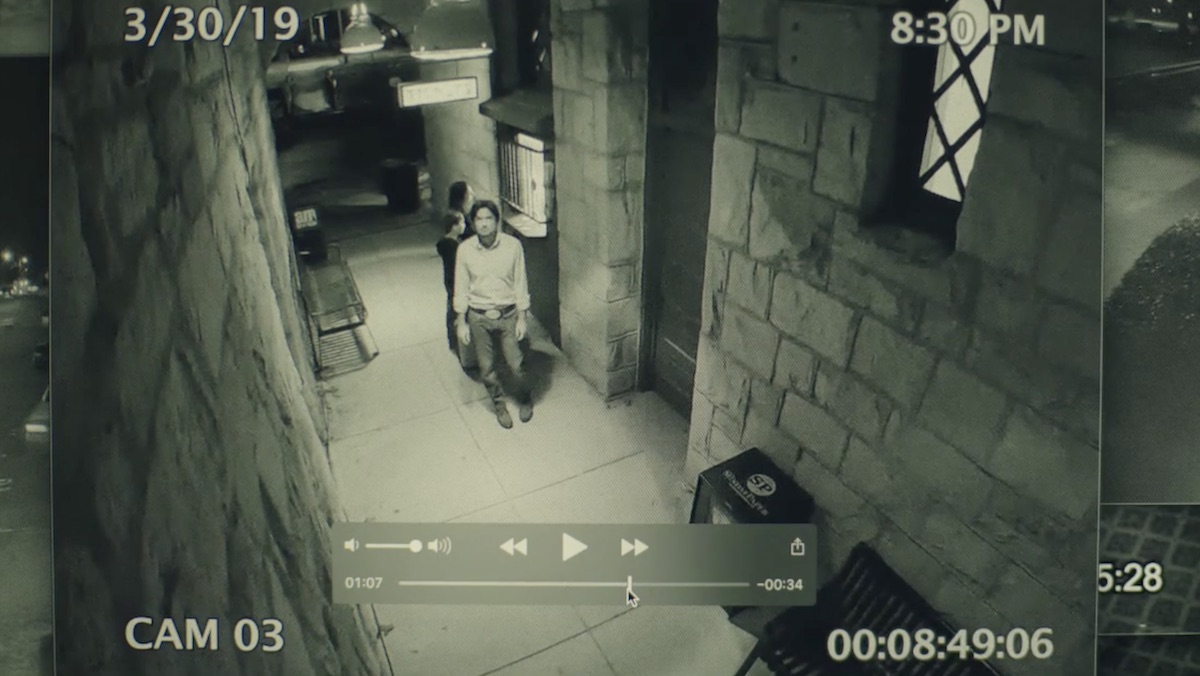 On the day Frankie Patterson was kidnapped and murdered, Terry Maitland said he was 70 miles away at the Babcock Hotel in Cap City. He said he left home at 9:00 AM on Tuesday, was at the hotel all day, then left at 7:00 AM on Wednesday. Maitland claimed he returned home at noon.

He had two eyewitnesses that both told police they were with him at the conference all day. The coach also said the first panel on censorship started at 2:00 PM. He said it went for an hour, followed by 45 minutes of questions. Hotel security footage seemed to support him, but it was unclear. A local access television crew’s footage absolutely did support it. Maitland was at the conference when Frankie Patterson was killed. This was all caught on tape. 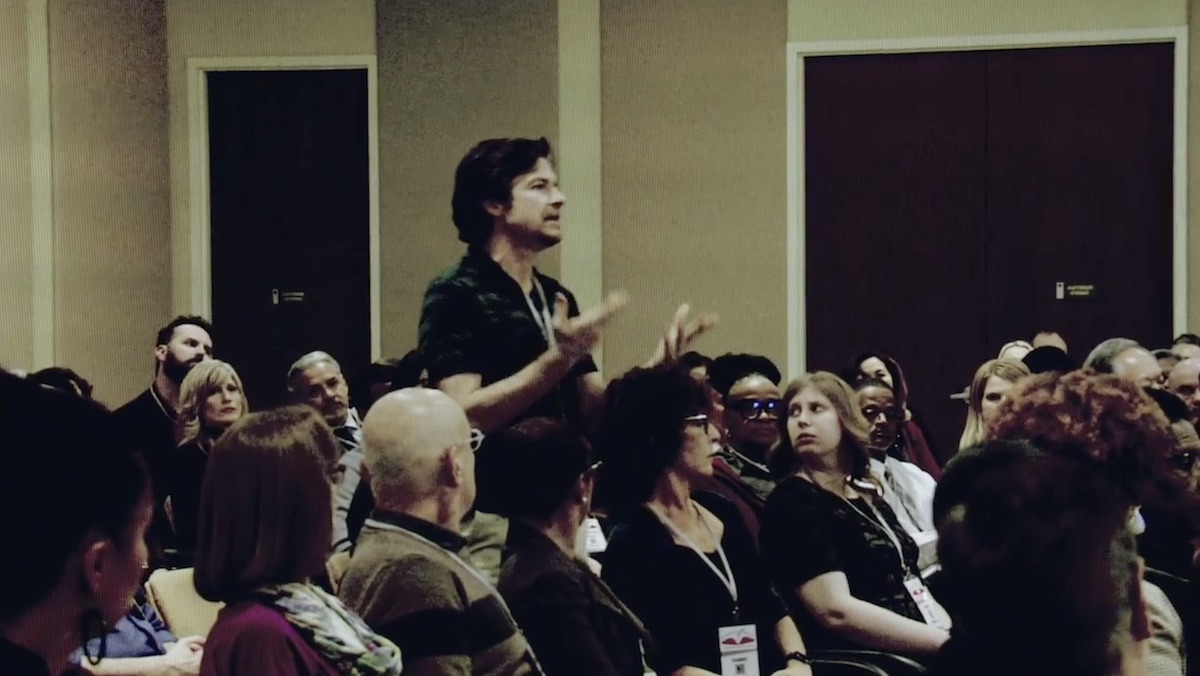 A gift shop owner also identified Maitland as the man who came into her shop and picked up a book no other customer had ever touched. Security footage also seemingly showed him enter the store, and his fingerprints were on the book. (Unfortunately they were also an exact match to the fingerprints found at the crime scene.) 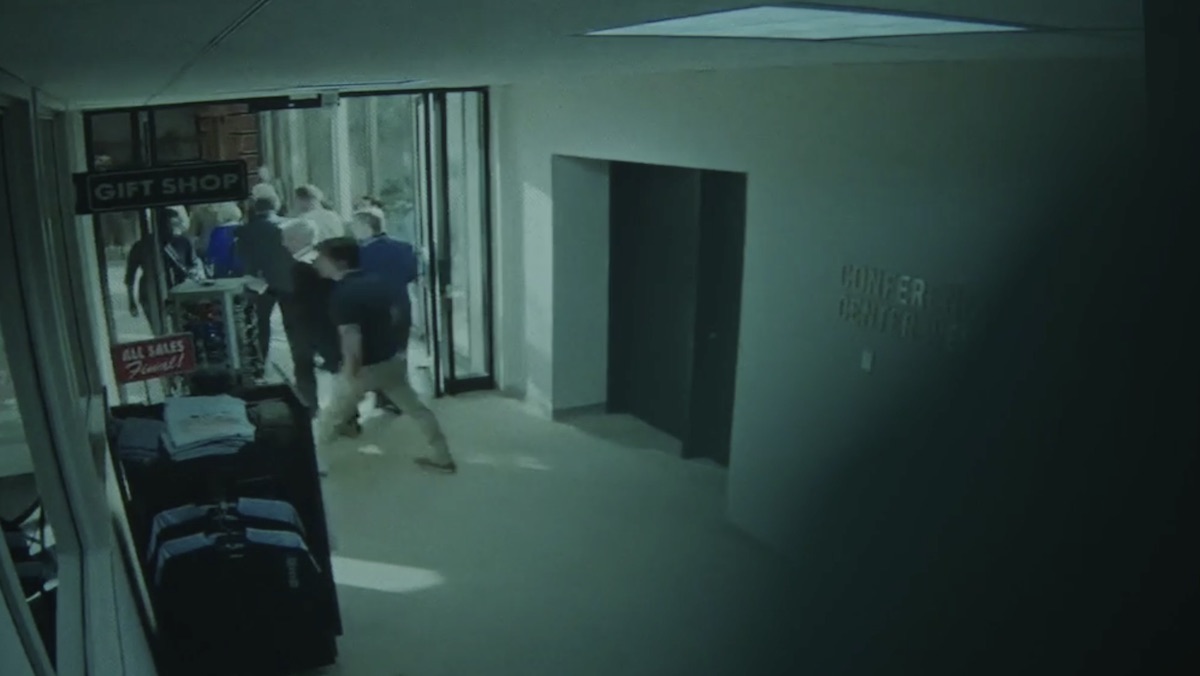 Everyone who identified Terry Maitland on the day of the murder is a questionable witnesses in some way. Mary the school teacher doesn’t like to drive much because of her failing eyesight. The second was a very young girl who was alone. Claude has a long rap sheet and only saw the coach in a poorly lit strip club. And the taxi driver only saw Maitland sitting behind her at night in a car without lights.

Mary the school teacher saw Frankie Patterson enter a white van with New York state plates. Police found his bike and blood inside. Terry Maitland said he had never owned or driven that van before, yet his fingerprints and blood were all over it. He also said he had not been in New York in 16 years.

His last time out of state was weeks earlier to visit his father in Dayton, Ohio. He was there from March 4th to the 7th, along with his wife and two daughters. All four of them flew into and out of Dayton. (The show didn’t supply any evidence or scenes to support this. Ben Mendelsohn’s Ralph Anderson did repeatedly and without question say that Maitland did fly both ways, though.) 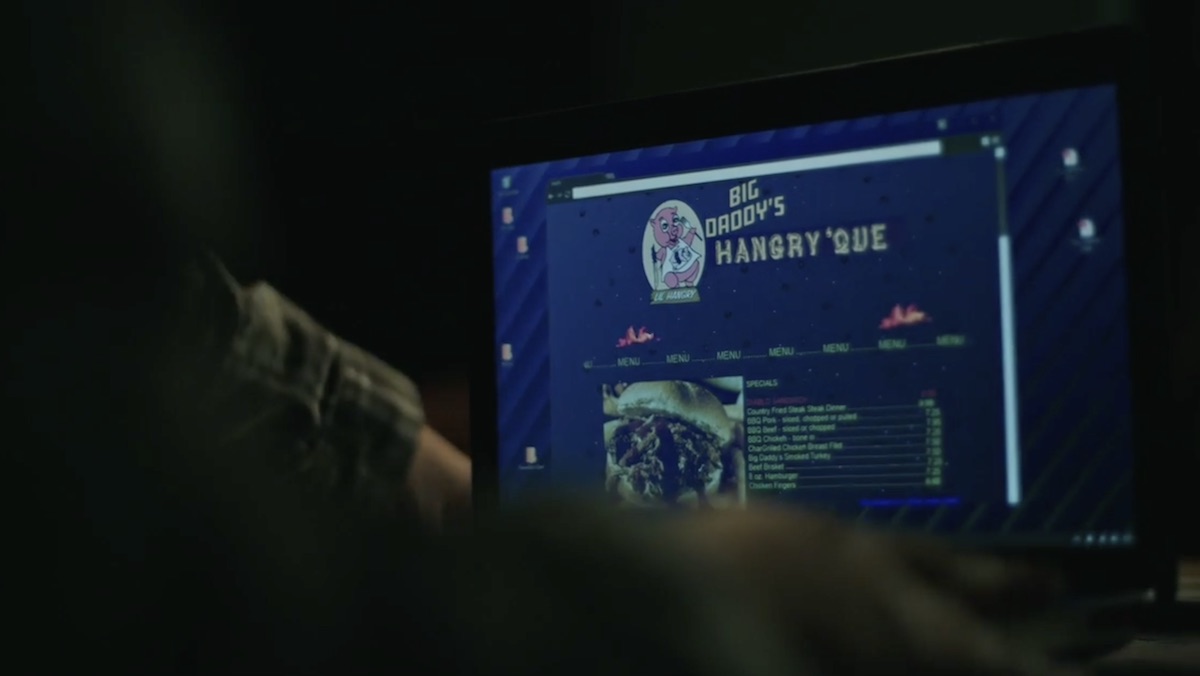 However, the van used to abduct Frankie Patterson was in Dayton on March 6, Ash Wednesday. It was near where the Maitland family stayed, near Big Daddy’s Hangry ‘Que. The van’s windshield had a piece of a flyer for the restaurant.

Even if Maitland flew, you can always buy a car and have it shipped or driven to you.

Maitland’s daughter said her father cut himself in Dayton. He bumped into a male nurse while visiting his elderly father, and the cut bled. He treated the cut back at his hotel, not far from the van used to murder Frankie Patterson in Georgia three weeks later.

If someone were trying to frame him for murder they would have what they needed for forensics. Especially if the nurse was trying to extract blood during their “bump.”

Questions for the Police 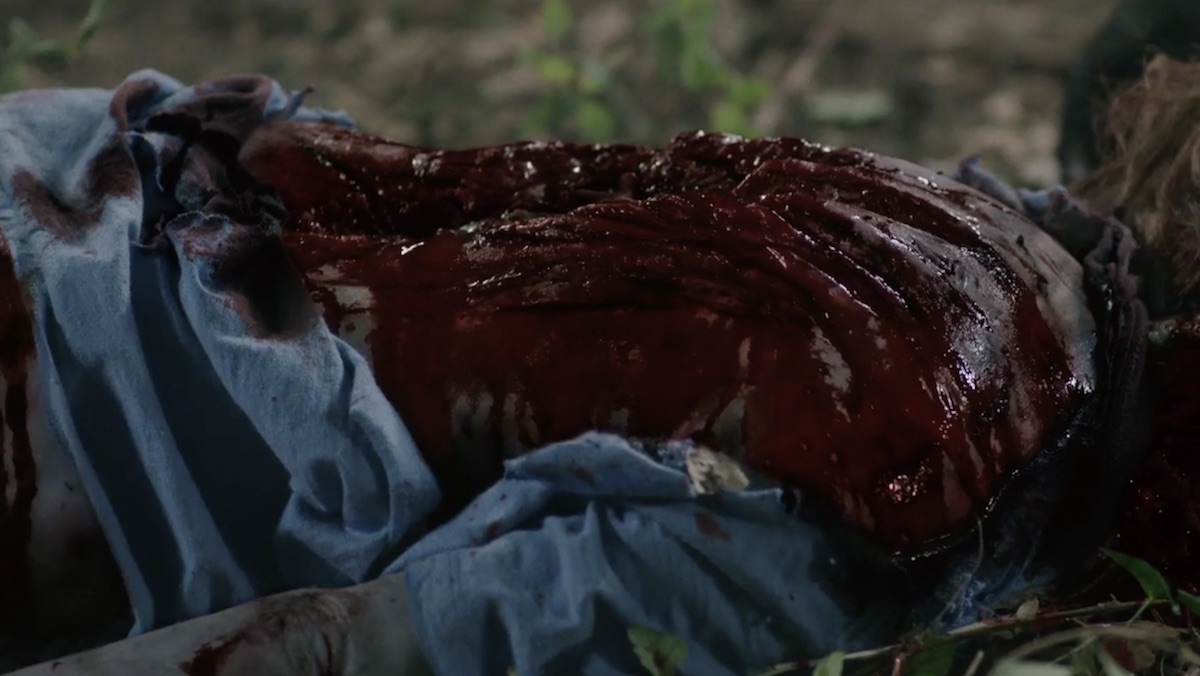 The killer mutilated Frankie Patterson. Yet police never found or even mentioned a possible murder weapon. Could a grown man really have done something like that with just his bare teeth? And if so, why didn’t the police match the human teeth marks on the boy’s body to Terry Maitland’s own?

Where are the clothes worn during the crime? The security footage shows the man believed to be Terry Maitland leaving the strip club only minutes after arriving. But he no longer had any blood on him and left without the bag he came in with. Where are those original bloody clothes? How did he dispose of them, including a large jacket, so easily inside the bathroom?

Sinister Forces, But of What World?

Normally it would appear only one of two (plausible) explanations could be possible. 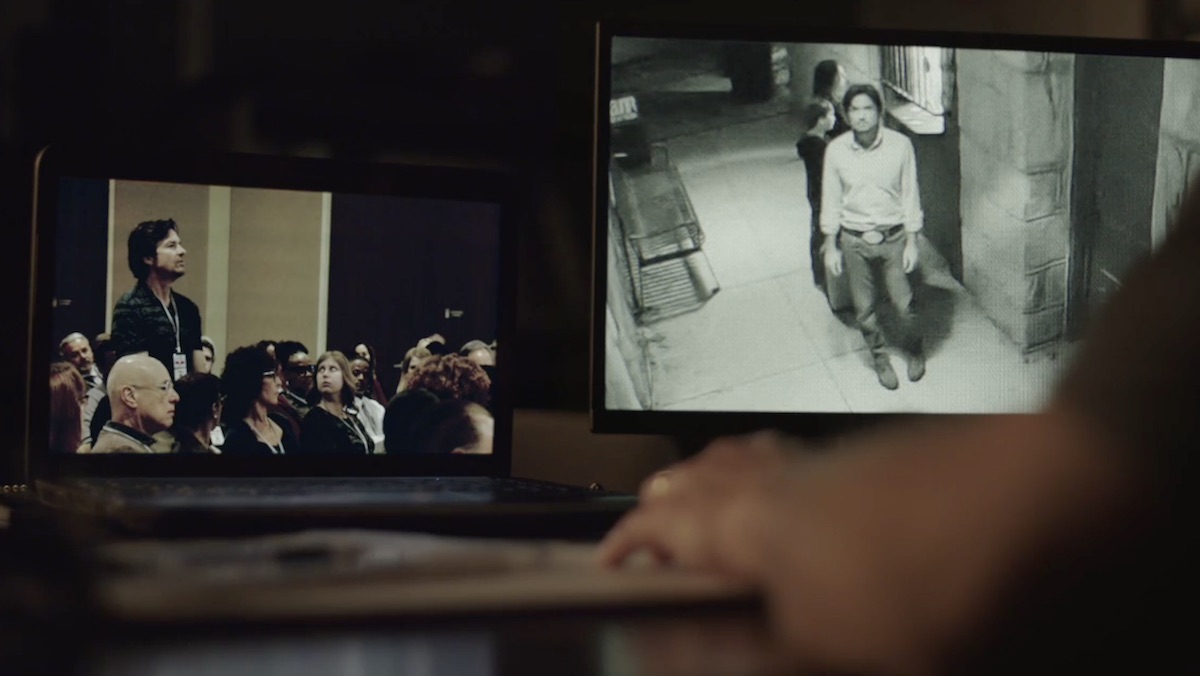 What if Mary the school teacher was wrong about the time of the abduction and Terry Maitland drove back after he was caught on tape at the conference? That’s when he could have killed Frankie Patterson before driving back to the hotel that night. It was only about an hour drive each way.

There are many questions about the timeline that would still need to be answered. But it would explain how he could be in “two places” at once. And also why his fingerprints were in the gift shop and the murder scene.

This is the simplest explanation. 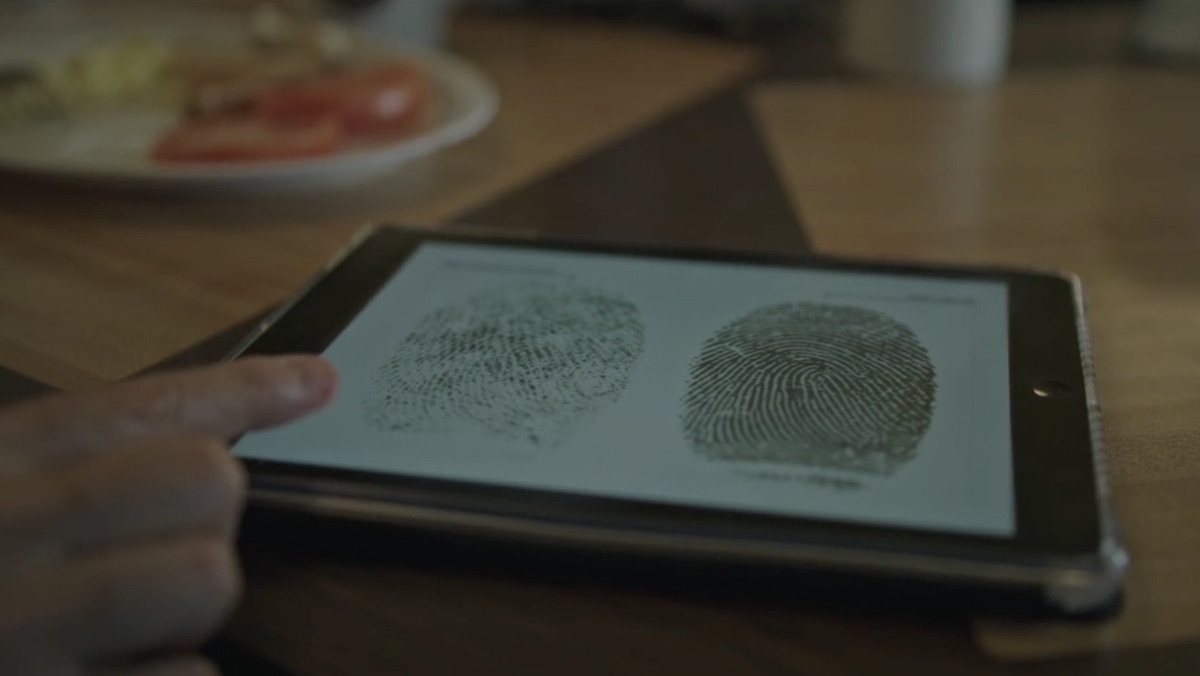 Terry Maitland, clear as day on tape with numerous eyewitnesses, was 70 miles away during the murder. One person can’t be in two places at once. The answer: someone who looked like Terry Maitland (or wearing a mask) framed him. That would be how eyewitnesses in his hometown got it wrong. They knew him well, but misidentified him under less than ideal circumstances.

The real killer seemingly followed Maitland back to Georgia from Ohio with that stolen van. He could have also had the blood from when Terry cut himself. That “evidence” could have been planted in the van and on Frankie Patterson’s body. They also could have replaced the van’s steering wheel with one Maitland has touched. This would also explain all of the killer’s weird actions from the time he arrived at the strip club. Being caught on tape “proved” Terry Maitland was the murderer. 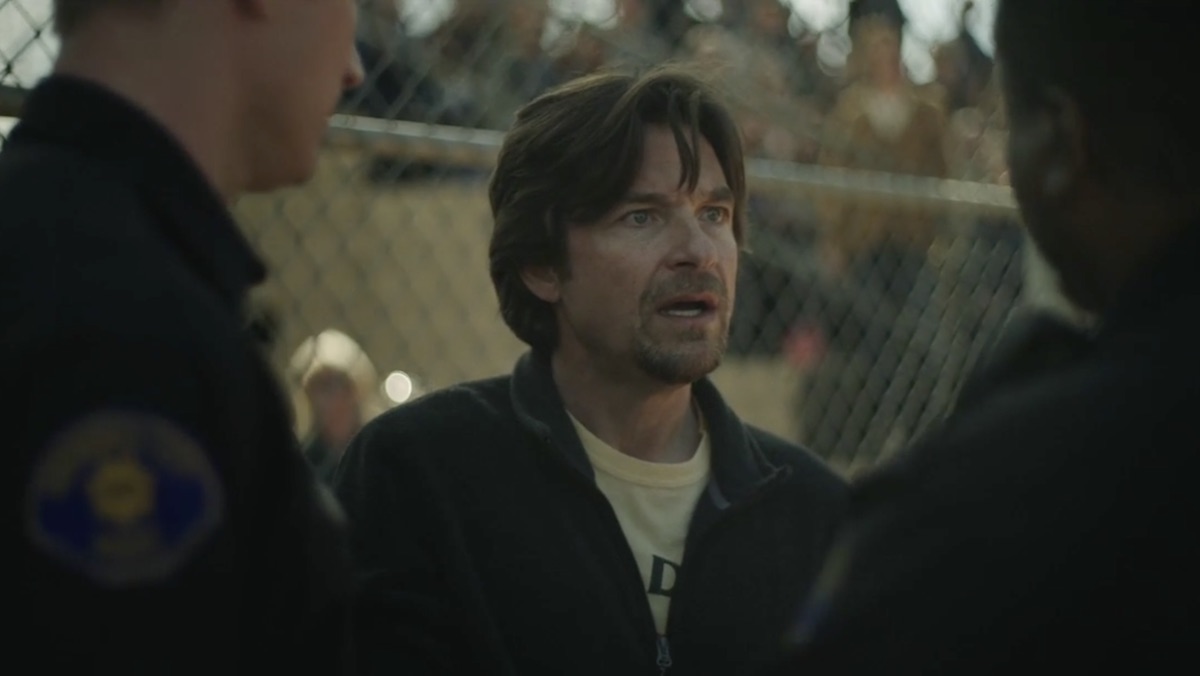 With no other context you can make a compelling case for either Terry Maitland’s guilt or innocence. “Guilty” is the more reasonable story, but would be very hard to get a conviction. But we know something the police don’t: this is a Stephen King story. The answer is likely not plausible at all, especially when a strange figure on a show called The Outsider keeps showing up in town. 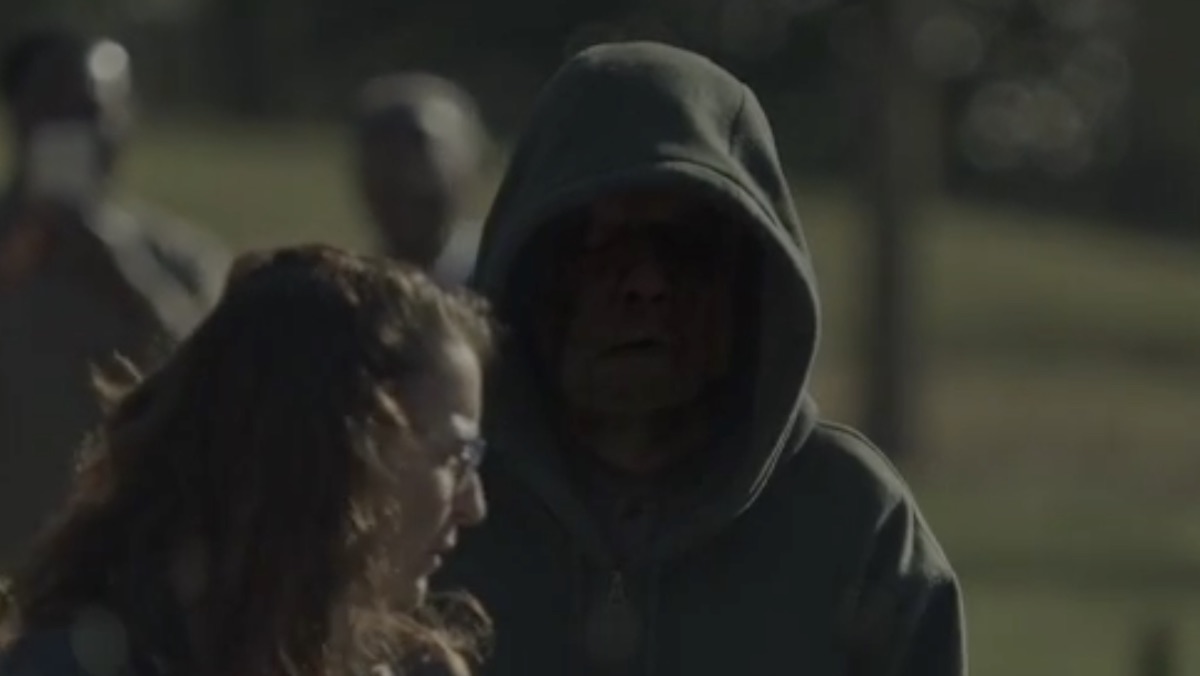 Did Terry Maitland have an evil twin brother who murdered Frankie Patterson? Does any of this have to do with his angry father who has dementia? Or does Maitland possibly have a doppelganger? Could another person with some kind of unlikely connection and a grudge be to blame?

Or is a supernatural creature responsible for everything? Could there be a shape-shifter/demon/alien/ghost haunting this town? Is it the mysterious figure in the green sweatshirt, the one with the “melted” face? What if that isn’t a mask? He/it keeps showing up, especially when people are dying. And who/what is the unseen figure haunting Terry’s youngest daughter? Maybe it’s just a young girl’s nightmare. But then how did it leave a pool of blood on the bedroom floor? Was it from that mutilated hog we saw, the one ripped apart like little Frankie? 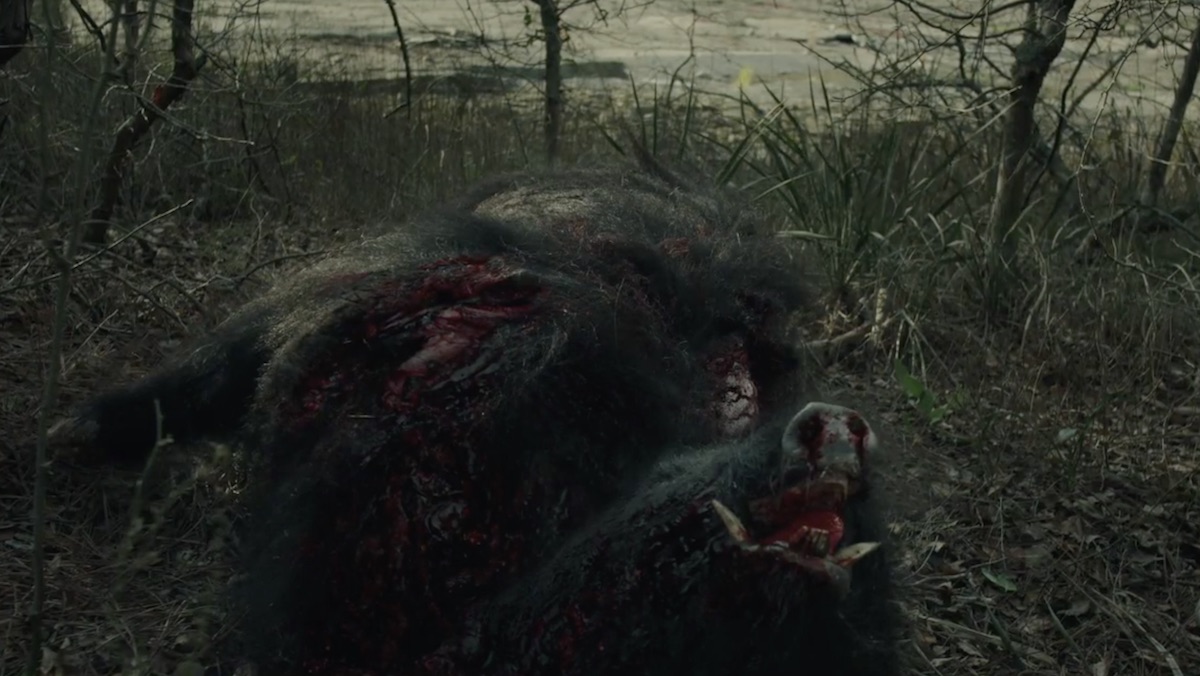 All of this seemingly impossible and conflicting evidence might not make sense because it doesn’t. Sinister and unexplained forces beyond our world might be at work. Because the answer might not be “who” murdered Frankie Patterson, but rather “what.”