You’ve probably heard about the Mars rover Opportunity signing off from the red planet for the final time this month. NASA lost contact with the intrepid robotic explorer, and after hundreds of attempts at reestablishing communications, declared the rover’s mission complete. That doesn’t mean it was a failure, however. In fact, Opportunity’s mission was a smashing success!

If you’re inspired by Opportunity and its dedication to its mission, there’s a way you can help the rover live on–in your Dungeons & Dragons game! Yes, you read that right. Walrock Homebrew, a creator of “fun, flavorful, and balanced homebrew content,” recently shared a free (!) addition to your Dungeon Master’s Guide to give Opportunity the… opportunity to explore your world next. 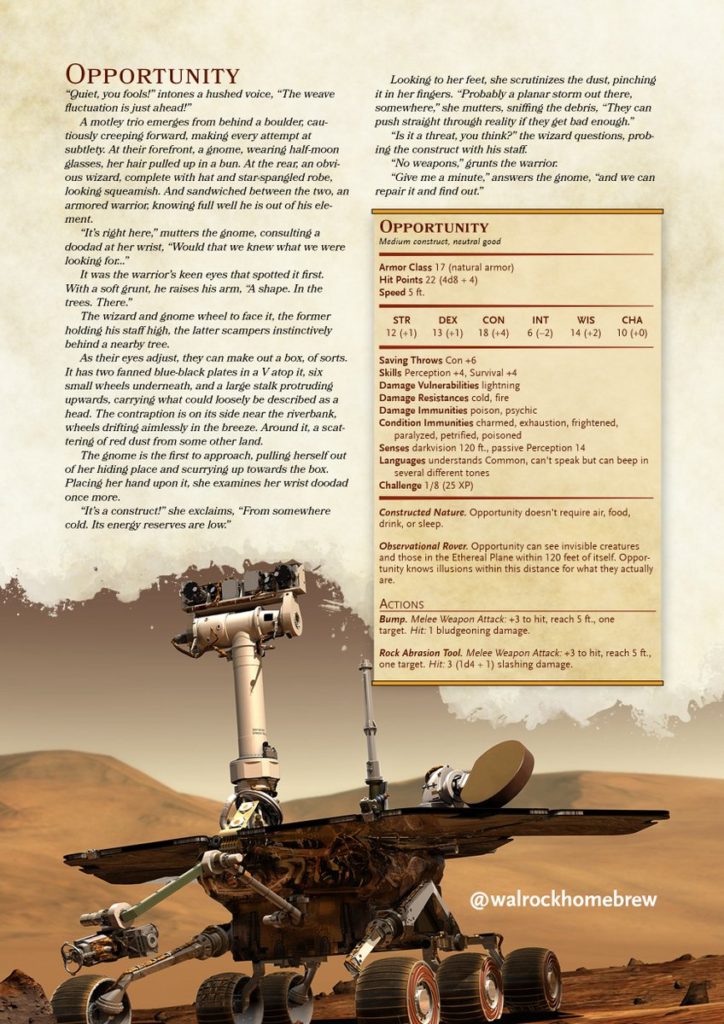 “Here’s a fairly-accurate statblock for our rover friend, and a nearly plausible reason for it to exist,” they said on Twitter. Naturally, there’s a gnome involved. And a planar storm. Just another day in Dungeons & Dragons.

Walrock Homebrew also shared more details for those who want to get their new robot friend up and running.

Treat Oppy as if it is Alien Technology (as on page 268 of the DMG).

You need four successful Intelligence checks to figure out how to work and repair Oppy, using the Figuring Out Alien Technology table to set the DC’s.

If you enjoyed this bit of Martian magic for your campaign, be sure to support Walrock Homebrew on Patreon for more thoughtful Fifth Edition homebrew content.

And we join everyone around the world in congratulating Opportunity for completing its groundbreaking mission, and thank it for giving us all a little bit more understanding about our red neighbor.

If you could bring more real world magic into your campaign, what would you add? Tell us in the comments.