Din Djarin found another group of Mandalorians in a recent episode of The Mandalorian. “The Heiress” brought the lone Mando face to face with Bo-Katan Kryze, former holder of the Darksaber and leader of Mandalore. Bo-Katan and her crew took off their helmets and upon noting Din’s shock, called him a “Child of the Watch” and a member of the Children of the Watch. When we watched the flashback in the season one finale depicting how Din became a foundling, a Mandalorian flew him into the sky and away from harm. Specifically a Mandalorian with the Death Watch’s symbol on their shoulder pauldron.

Bo-Katan calls the Children of the Watch religious zealots who broke away from Mandalore society to restore the ancient way. And that’s kind of on par for a group that has connections to the Death Watch. Let’s look back at the Death Watch’s history. 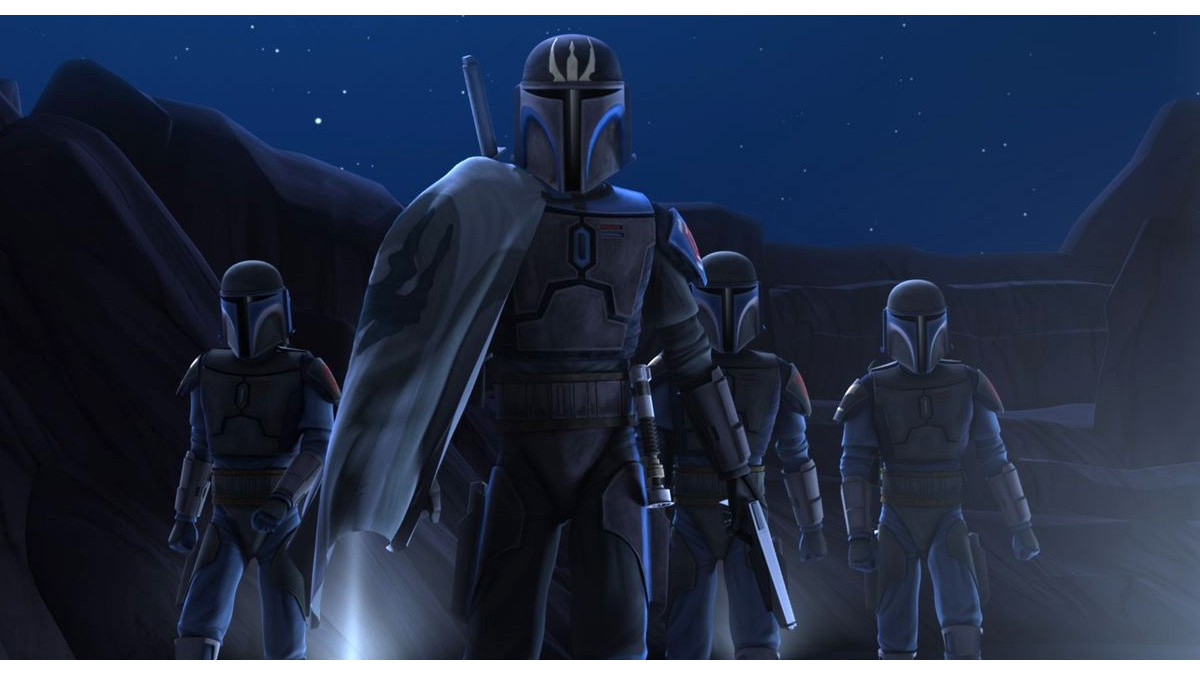 Current Storytelling Universe (Canon, If You Must)

Star Wars: The Clone Wars introduced the Death Watch in the season two episode “The Mandalore Plot.” The animated series depicted the group as extremists fighting against the current regime with terrorist attacks. Led by Pre Vizsla, the Death Watch disagreed with Duchess Satine Kryze’s pacifist leadership. After the Mandalorian Civil War ended, the Duchess eschewed the culture’s warrior ways and anyone who persisted in following them. She wanted peace on Mandalore. But Pre Vizsla formed the Death Watch and fostered the group’s growth on the Mandalorian moon Concordia; he named himself as governor of the planet. Bo-Katan Kryze led the group alongside him, standing in opposition of her sister, the Duchess.

The Death Watch plotted to overthrow Duchess Satine’s pacifist government and restore Mandalore’s warrior ways. To achieve that end, they allied with Count Dooku and the Separatists to stage a coup against the Duchess. They were willing to go to any lengths, including inciting another war using their alliance with the Separatists to bring the Republic to Mandalore. Vizsla even sent a suicide bomber to attack a Republic cruiser. The situation evolved in complexity with the Death Watch undermining Duchess Satine with their actions and with rumors about her leadership. But after Pre Vizsla (who Jon Favreau voiced, by the way) had a disagreement with Dooku, the Death Watch separated from the Separatists.

The extremist group moved their base to a planet in the Outer Rim, Carlac. There, they took the ultra classy move of forcing women from a nearby village to work as servants. After the men of the village protested this behavior, Pre Vizsla killed the village leader’s granddaughter and set the village on fire. Luckily Jedi padawan Ahsoka Tano happened to be undercover and jumped into action.

As their next desperate move, the Death Watch formed a partnership with Darth Maul. This happened after they found an escape pod with Maul and his brother Savage Opress and rescued them. Maul was keen on taking down Mandalore and happy to use the Death Watch’s forces to do so. Here is where Bo-Katan started disagreeing with Vizsla. She warned that a partnership with Maul wouldn’t be any different than the one they had with Dooku—and Dooku abandoned them once they were no longer useful.

Bo-Katan was right to be suspicious of Maul. The Sith convinced Vizsla that the Death Watch needed greater numbers to take over Mandalore. Maul cobbled together resources with a number of underworld organizations, forming the Shadow Collective (likely a precursor to the Crimson Dawn we see in Solo: A Star Wars Story). Bo-Katan warned Vizsla that Maul would try to take over, and Vizsla should have listened. Maul beheaded Pre Vizsla and took control of the Death Watch. Bo-Katan and her own squadron, the Nite Owls, noped out of there shortly thereafter, refusing to follow Maul.

And Maul did briefly succeed. He killed the Duchess and installed a leader of his own. They led the planet until the Siege of Mandalore, which falls during Revenge of the Sith on the timeline. And at some point around this time, a group of Mandalorians with the Death Watch symbol (which was Clan Vizsla’s symbol) on their armor rescued Din Djarin from danger.

The Shadow Collective as Maul shaped it fell apart. As time went on, some Mandalorians viewed the Death Watch as traitors (as mentioned in Star Wars Rebels). We aren’t sure exactly what the group did between then and the time we see their new form, Children of the Watch, in The Mandalorian. That’s how Bo-Katan refers to them. No one has mentioned the phrase “Death Watch” in The Mandalorian yet. However, it’s not a stretch to see how the Death Watch, a group wanting to restore Mandalore’s ancient warrior ways, could evolve or splinter into the Children of the Watch, a group that wants to do the same. This is the way… or is it?