The Legacy of the Steven Moffat Era of DOCTOR WHO - Nerdist

The Legacy of the Steven Moffat Era of DOCTOR WHO

I got into Doctor Who in late 2009. After watching a couple of random episodes, I devoured series one through four and the first three of the gap year specials until I could finally watch “live” with the BBC America airings of David Tennant’s two-part farewell, “The End of Time.” So, in 2010, when the first series of Matt Smith as the Doctor, helmed by showrunner Steven Moffat, began, that was my first experience with watching the series unfold naturally.

Seven years and 84 episodes later, the Moffat Era—that which introduced so many new fans to Doctor Who—has come to a close. In honor of this terrific chapter in the series’ history, we’re looking back at the whole regime and see what legacy Moffat will leave with the Whoniverse. The first thing people noticed about head writer Steven Moffat’s take on Doctor Who was his penchant for season-long story arcs. His predecessor Russell T. Davies certainly braved the occasional season-spanning stories, but they mostly focused on a buzzword or phrase that would eventually be explained, usually in the two-part finale. Moffat’s tack was to bring the seasonal narrative up front and center as frequently as possible.

Series five brought this into play in the form of a crack in time and space; this story plays a big part in “The Eleventh Hour,” then comes back in the next two episodes in little asides and mentions before being huge in “The Time of Angels/Flesh and Stone.” Afterwards, the premise is reduced to mentions and hints again before finally impacting everything in the eighth and ninth episodes, “The Hungry Earth/Cold Blood,” and then wrapping up in the final two episodes, “The Pandorica Opens/The Big Bang.” No Who fan at the time expected this kind of thorough plotting. Series six attempted the same type of arc—that being the revelations about River Song’s identity and exactly who the Silence were. Series seven, the split season, introduced another season arc: the mystery surrounding Clara Oswald, which is the one arc that is answered completely within its allotted season due to Matt Smith’s leave—a choice that most people (myself included) found a bit awkward and forced.

The shortcomings of this finale is what I believe left the three Capaldi series without external, complex season arcs; sure, figuring out who Missy was became a major theme of series eight, but its carryout was reminiscent more of the Davies model of occasional mentions before the finale than of anything from Moffat’s toolbox. In the end, the Capaldi years’ season arcs tended to be much more about the Doctor’s relationship to his companions.

EVERY SERIES WAS DIFFERENT 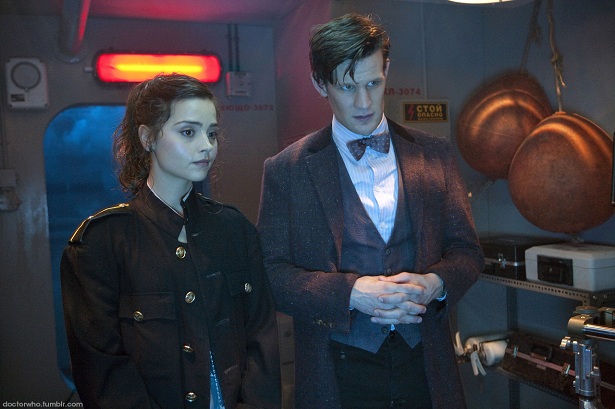 One thing I will forever applaud Moffat for is being unafraid to totally change up his approach on a year-by-year basis. Series five was a puzzle box that needed to be solved; series six, while the most similar to five, was a mystery of a different sort.

Moffat couldn’t do a big huge myth arc series three times in a row, and the schedule for series seven wouldn’t really allow for that anyway. Seven was in fact defined by each episode standing on its own; the series even branded each episode as a separate movie, culminating in “The Day of the Doctor” in November 2013, which boasted a feature-length runtime and was actually shown in cinemas. When Peter Capaldi took over, Moffat’s approach changed drastically. Series eight was about how Clara and this new version of her best friend get along. It wasn’t pretty between them for a good portion of the series, and her new relationship with Danny Pink certainly complicated matters. The Doctor and Clara lied to each other that whole year.

With Clara fully back on board, series nine—which was mainly cliffhanger-filled two-parters or thematically linked pairs—was all about Clara starting to believe she was as invincible as the Doctor, which inevitably led to her making the choice that killed her. As Moffat had initially intended series nine to be his swansong, he pulled out the stops with the best and most consistent storytelling of his era.

Series 10, it has to be said, was different in that it was a throwback to more of the RTD-style and pacing, and even the introduction of a single-season companion. While I am in general a proponent of the Moffat years, he definitely had some issues in the companion department. Not in the casting of the companions, or even the episode-to-episode banter and camaraderie between the companions and the Doctor, but in the use of them. Amelia Pond wasn’t just a young woman traveling with the Doctor; she was “The Girl Who Waited” and was the big cosmic puzzle piece to the whole series. Rory wasn’t just Rory, but “Rory the Roman,” who watched over Amy for 2,000 years. Clara wasn’t just Clara; she was “The Impossible Girl,” who doesn’t make sense to the Doctor. Until Bill, none of the Moffat-era companions were able to just be people at first; Amy and Rory only got to just be people in their final five episodes, and while two out of Clara’s three seasons had her being more or less a real woman with a job and desires and things, she still started out as a mystery, and while there’s nothing inherently wrong with it, it makes the Doctor choosing to spend time with them more based on their importance to the universe than to them being, you know, friends.

MANY DOCTORS, MUCH TIME LORDS Not only did the Moffat era offer up two full-time Doctors, it also brought Time Lords back in a big, bold way. Russell T. Davies’ final story brought the Doctor’s home planet of Gallifrey back in a vain attempt to save itself from the Time War, forcing the Doctor to effectively destroy his homeworld twice. Learning that Gallifrey is in fact still around somewhere and the resultant search for it became a major part of the latter Moffat years.

With the 50th anniversary special, “The Day of the Doctor,” Moffat gave the us the first multi-Doctor story since 1985’s (terrible) “The Two Doctors.” The Eleventh Doctor teamed up with both the Tenth Doctor and the newly created War Doctor (the late, great John Hurt) in a story that brought together ALL of the Doctors to not-destroy Gallifrey in the Time War after all; the episode also gave the Eighth Doctor another moment on TV screens, and even produced a possible-maybe future version of the Doctor that looked like an old Tom Baker. And as if that weren’t enough, Moffat’s tenure ended with a team-up between the current Doctor and the First one! That’s like seven fully-on-screen Doctors all told. An amazing feat.

While it wasn’t perfect all the time by any means, the Moffat years of Doctor Who were represented some of the most imaginative and singular episodes of the whole of the show’s history, and that’s quite the legacy to leave.