The Last of Us Part II is one of the most anticipated games shown at E3 this year, and it was a definite standout last week with a new trailer that combined gameplay and cinematics. It’s impressive to see how much Naughty Dog has improved since 2013, and that includes all of the game mechanics they showed off in the demo. We had an opportunity to sit down with Part II‘s co-directors Anthony Newman and Kurt Margenau to discuss these features and how they will continue to add to the fluidity and realism of the combat. Without further ado, let’s break down all of the moments in the trailer that you may have missed. The animation was so smooth, it’s hard to believe the player had complete control when Ellie squeezed between the shelves. But that’s exactly what Margenau confirmed when we asked how it would be incorporated into the game’s movement. “The environments have narrower spaces that look like, ‘Oh, maybe I could squeeze through that,’ and the idea is yeah, you can,” he said. “We’re not trying to take control away and do a really fancy thing there, just get you through quickly and be responsive.” We can imagine that this new movement will not only make the movement flow better, but also add to its realism.

Although we didn’t get to ask much about this new item, it’s worth mentioning that exploding arrows are now going to be a craft-able item. This looks like a great long-range area-of-effect weapon to add to our arsenal. We saw the new crawling mechanic twice: once when Ellie was hidden in the leaves, and again when she went prone to hide under the car. She and Joel already crouched while stealthing in Part I, but this adds a whole new level to staying out of sight. Ellie can now lay flat on her stomach and maneuver around, and even hide under cars. However, if the player stays in one place too long, an enemy can find them and drag them out from their hiding spot.

Surprisingly, you couldn’t jump in the first Last of Us game. That, of course, has changed. We saw Ellie clear a wide gap while evading some cultists in the demo. The addition shouldn’t do much to mess with the game’s controls; as Margenau said, “It’s the X button—it’s your clamber, traversal button.” We can see here how the team at Naughty Dog was able to incorporate mechanics from Uncharted 4 and Uncharted: The Lost Legacy; the jump will diversify the movement, and add a new verticality to fights, much like it did in the final Uncharted games.

The dodge is another mechanic we saw in an Uncharted game, specifically at the end of the fourth installment. In this new demo, we saw Ellie dodge both a sword and an arrow, with different animations for each. The player will be able to fight defensively as well as offensively, which will make melee fights even more complex. The melee has been improved in other ways, too, like how “We can see these beautiful synched animations and perfect facial animation and all that, but for the first time [The Last of Us‘] weapons are able to collide with the environment,” Newman said. “So you have the pickaxe guy, where he slams into the wall and all that stuff breaks. I’m pretty excited about that feature.” On top of that, enemies can now block, parry, and dodge as well. Sounds like an already intelligent AI is getting an upgrade. 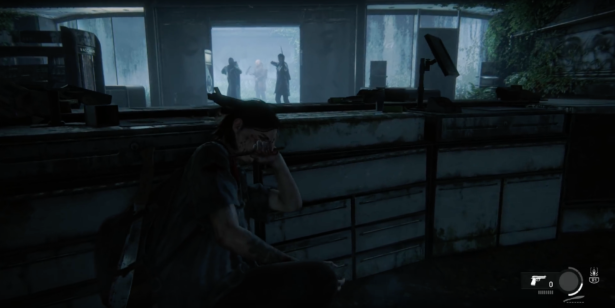 We became accustomed to the bow in the winter section of the first game, but now it looks like we’ll be facing one on the other side of the fight. “This is the first time we have enemies with bow and arrows,” Newman told us. Not only will Ellie face the risk of being hit by an arrow, but now they can actually stick into her. They will be a detail in the animation, but more importantly, will now also affect the gameplay. As Newman explained it, “When [an arrow] happens to get stuck in you, your Listen Mode is disabled, and when you go in to aim, it increases your weapon sway so it becomes really difficult to aim at people.” Much like healing or crafting, the player will have to find a place to safely remove the arrow to restore Ellie to normal. In one of the most exciting sequences of the demo, we watched Ellie fight a guy with a huge sledgehammer. Apparently, this is going to be a recurring challenge for us in the full game, because these dudes are a new enemy type: the heavy. According to Margenau, “This guy can pick you up and throw you, so if you’re blocking too much and he gets too close, he can grab you, he looks for things to throw.” He can actually throw Ellie through the environment, which then leaves her vulnerable on the ground for a moment.

Now, I know what you’re thinking—this is all too good to be true, this had to be scripted right? Nope. Newman and Margenau assured us that everything we saw was live code, meaning all of the scenarios in the demo can absolutely happen in your play-through, but they would probably happen differently. Although it looks like Part II is still a ways off, these new mechanics look like they’ll build on the first installment in a great way, and give us a lot to look forward to.

Which one of these mechanics are you most looking forward to trying? Let us know in the comments!