The HOW And WHY Of RPG Character Creation And Development - Nerdist

The HOW And WHY Of RPG Character Creation And Development

Character creation in many RPGs consists of starting with a base set of ability scores for strength, dexterity, constitution, and others. These ability scores are the foundation stats of your character, and govern just about every character aspect throughout its lifetime.

These standard ability scores often have a three-letter abbreviation, such as STR, DEX, and CON. Whatever ability scores your favorite RPG system uses, there are two more three-letter ‘stats’ that are crucial to your character’s development: HOW and WHY. Adding and making avid use of these ‘stats’ will help make your character more than just a set of numbers, and will take it far beyond the page it’s written on. 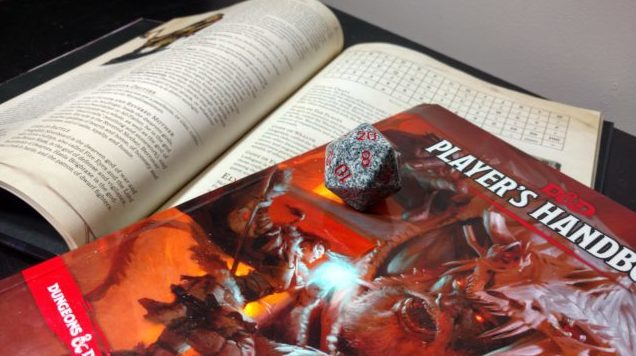 I’ll be using Dungeons & Dragons as the primary example here, but I have in mind that these examples apply to all tabletop RPGs.

Chapter 4 of the D&D5E Player’s Handbook covers Personality and Background. In my humble opinion, this should be chapter 1. Long before I ever begin to roll for ability score numbers, I think of an interesting personality and background for a character I want to play. I note physical, mental, emotional, and spiritual details for the character, and create a life background, including reasons that have inspired or pushed my character into becoming an adventurer.

Next, I roll for ability scores. This is the point I use the HOW stat to flesh out my character. For example, I roll 9, 10, 12, 14, 15, 16. With my character’s background and personality in mind, I then began asking myself how my character came to have the number stat that gets assigned to the ability I put it into.

Say I put the 16 into CON. How did my character develop a strong constitution prior to becoming an adventurer? What life choices or circumstances happened that have given my character an abundance of health and energy? If those questions are not already answered in the background or personality, I answer them and make note. Then I go about asking similar questions for the remaining ability scores. 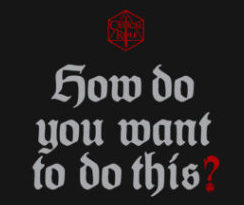 In D&D, the Ability Score Improvement feature allows players to increase one character ability score by 2, or increase two ability scores by 1 each. This feature may be chosen at 4th, 8th, 12th, 16th, and 19th levels. If you decide to use this feature, ask yourself how your character’s ability score has improved over the last 4 levels. What are the reasons for the increase? Did your character adventure mostly in a rugged, mountainous region, and come out with a bit more strength, or with more constitution? Did your character have a number of (critical) successes at dodging enemy attacks, or influencing NPCs? Let these adventure elements contribute to your character’s development, and take the how of what’s happened and make it your own.

In many ways, how and why could be interposed when developing your character during creation and play. For this example, I’ll point directly to the narrative style of tabletop RPGing, since it’s where I use WHY most, and where I see it being used most.

The narrative style of tabletop RPGs focuses on the GM and players telling their respective stories, with less importance on rolling dice. Chance is still an integral part of the game, but much of the results of chance are left up to player interpretation rather than a static rule. The narrative play style lends itself more to using the WHY ability, and is a superb way to develop your character on the fly, in the moment, without having to attempt to think of everything you want your character to be right at creation.

For example, say your character has to roll a (Wisdom) saving throw against a black dragon’s Frightful Presence (fear) effect. No matter if you succeed or fail, instead of allowing the GM to announce a droll “you succeed/fail”, interject your own why, and announce your character’s reason for the success or failure.

Chances are, this isn’t something you came up with during character creation. Take a moment to consider the details of the encounter – your character’s personality and physical and mental state in the moment, what are your party members doing, what items and equipment are you wearing, what’s your combat style, etc. If you succeeded on the save, why? If you failed on the save, why? Has your character ever had a successful or failed save before on the same or similar effect? Is there something in your character’s background that you drew upon for inspiration for a success, or some shocking, terrible childhood event that suddenly came to mind to cause a failure? The tactic here is to make use of what’s happened to develop your character with the WHY this thing happened the way it did, when it did. 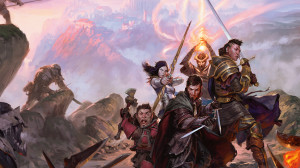 Adding HOW and WHY to your abilities will help give your characters a life of constant development and progress, instead of just merely being a page of dry stats and random numbers. As you tell your story, your GM and fellow players will be able to join in, making their own stories, and linking everyone’s story together. And that will make for a campaign to remember long after it’s over.

Do you use HOW and WHY in your tabletop RPGs? Tell us in the comments!