The History (and Lessons) Of Game Day: A Hugely Successful Regular Gaming Event

What do a failed trivia night and a hugely successful bi-monthly board game day have in common? In a word, everything. After showing up to a trivia night and finding out his team was the only one there, Mark pulled board games out of his trunk and spent the evening playing games. At the end of the night, everyone looked at each other and agreed that it could be an event. The store manager agreed to give it a try.

The first Game Day was in August of 2005 and drew twenty-two people. Almost twelve years later, it’s still going strong. A recent Christmas event maxed out the space in the store and he had to turn people away. Not bad for something that happened on a whim.

What makes this event so popular? For the price of admission, you get subs for lunch, pizza for dinner, and snacks and drinks all day. Mark gives out raffle tickets for door prizes and sells others for a bigger raffle near the end of the night. It’s a great chance to try out something new that you’ve been eyeballing; Mark’s collection is huge. 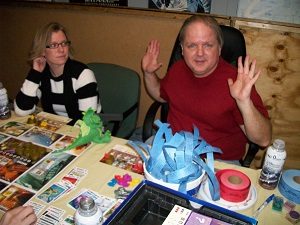 A lot of work goes into the event.  Mark has brought up to six hundred games from his personal collection in the past, but has pared it back to closer to four hundred. He has made deals with Mr. Goodcents and local pizza places to deal with his massive food orders as well as a Costco membership for the snacks and drinks. Two days before the event he makes four trips to the store to bring in the games and snacks. The morning of the event, it’s a stop to pick up the subs and perishable food (in ten years, his sub order has never been wrong).

The payoff for all this hard work for Mark is the sense of community involved. Walk into the event, and you can join or watch pretty much any of the games being played. If you’re by yourself, no worries, you’ll probably leave the day with new friends. Mark’s watched friendships and romances bloom.

His favorite part of the event is when people bring a game he hasn’t played and want to share the love of the hobby with others. He’s gathered a great group of friends to help him out so he does get a chance to participate in his own event. Because Game Day is the second Saturday of even numbered months, people always know when the next one is happening. That means that people have celebrated Valentine’s Day as well as birthdays playing board games.

What does the game store do for Game Day? First, they no longer schedule anything else for that day. Long gone are the days when Game Day shared the promo area with other events. Clerks, managers, and general managers have helped Mark unload and set up the event. Extra staff is on hand to help take out the trash and handle the extra volume of people in the store. Lastly, they provide a five dollar coupon for everyone who participate in the event to encourage people to pick up a game they liked. 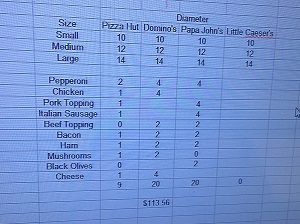 Mark’s been doing this a long time and has the event down to a science. He has spreadsheets for most of the previous events so he can track attendance and what games he’s given out as prizes. He even has a calculation for how many of each type of pizza he needs to get. For him, the hardest parts of Game Day have been getting the right mix of games, setting up, and turning away players when they run out of space. Running Game Day has led to him to becoming the board game librarian for Geekway to the West, another board game event that draws a crowd.

TIPS TO START YOUR OWN GAME DAY

Mark learned many things along the way to get to grow his event. Here are some tips if you’re looking to build something similar.

Do you have a local event you love? Tell us about it in the comments.