The Grizzled: 5 Reasons to Play This Game About Empathy, Cooperation and War - Nerdist

The Grizzled: 5 Reasons to Play This Game About Empathy, Cooperation and War

Cool Mini or Not, a company renowned for its board game miniatures, published a game with no miniatures late last year. That game is The Grizzled, and it’s fun, fast, deep and fascinating. So here are five reasons we think you should check it out:

1. It’s a small box game that packs a big punch. 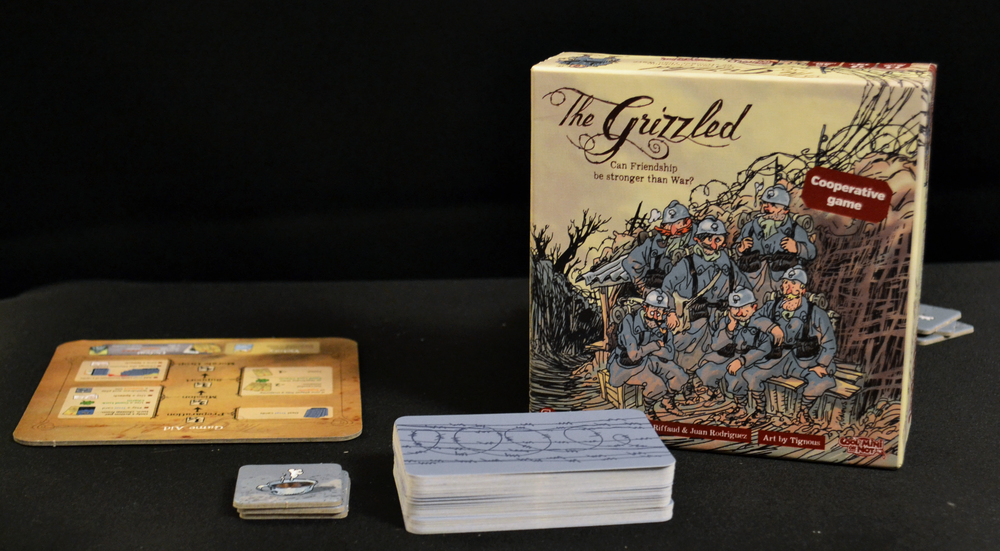 The Grizzled supports 2-5 players and plays in about half an hour. The mechanics are simple and rounds are played quickly.

It is also a surprisingly difficult game.

A leader determines the difficultly of a mission and assigns it a numerical value. That number of cards is dealt to all players, who must then take actions, either revealing a card from their hand that represents a challenge to their group (a trial) or themselves (a hard knock); giving an inspiring speech, which removes up to one specific trial from each of the other players’ hands; using a lucky charm, which removes an already played trial; or withdrawing from the front line.

Trials come in six different types (night, snow, rain, whistles, gas masks, and shells) and hard knocks are a type of detriment to your soldier. Some cards have a combination of multiple trials, or a mix of trials and hard knocks. If a specific mission has 3 types of the same trial as revealed by players, the mission is a failure and players have a harder road to returning home to their families. If a round ends with a player carrying 4 or more hard knocks, the game ends as a failure.

Players who withdraw from the front line use a support token from their hand, if they have one. Who they’re supporting isn’t revealed until the end of the round and if a player receives more support tokens than other players, they can remove 2 hard knocks or renew a depleted lucky charm.

Players are trying to reach the bottom of the trials deck and empty their hands of trials cards, which ends the game and returns their soldiers safe to their families. 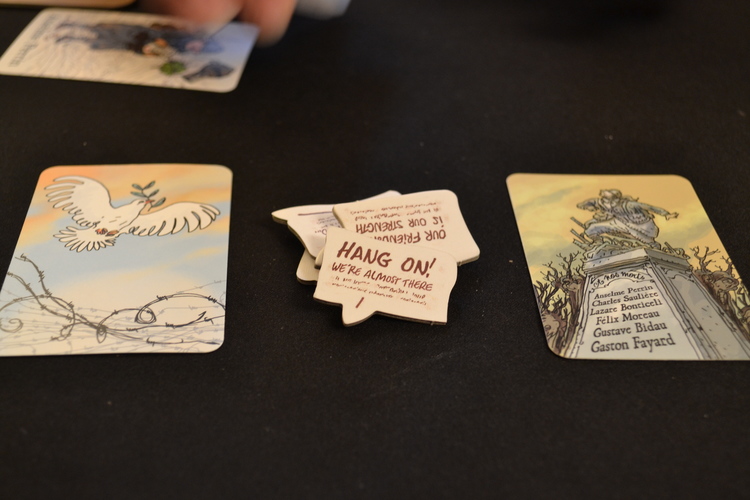 2. The game is fully cooperative – you win together or lose together.

There is no elimination in this game, and players whose soldiers withdraw from the front line are really only out of play for a minute or two; certainly not enough time to take a bathroom break. Players truly win together or lose together–when one player is too injured to continue, the game ends. The mission is to get all the soldiers home to their families, not for one to go back with three caskets. 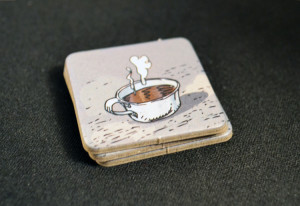 I love Pandemic and Zombicide, but the problem with cooperative games of that nature is that a player’s actions can be heavily influenced by other players, which leads to one or two players essentially playing by themselves with other people around the table.

The mechanics of The Grizzled are such that a single player cannot influence another player. A player’s hand is kept secret, as are support tokens, so the influence of others is substantially minimized. The game is truly about anticipating the needs of the group and supporting the collective goal through one’s actions.

4. The art and atmosphere  of the game is spectacular. 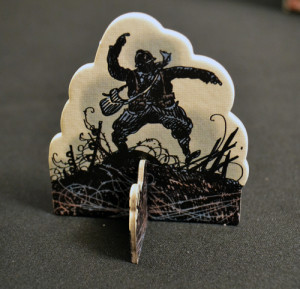 This game is a work of art and the components, while not miniatures, are beautifully illustrated. Furthermore, the game elements capture the themes of WWI, with players receiving hard knocks not unlike the injuries and PTSD symptoms you’d expect from those on the front line of war.

While small, these little elements together create a game atmosphere that makes you feel for the soldiers and get an inkling of an idea of what those who actually fought might have faced.

5. There’s room for roleplaying and storytelling.

Laying down a card with a whistle atop a night background, a player can say, “We were roused with the call to war in the dark of night.” The next player, laying down a card with shells and snow can say, “We arrived to the battlefield, shells exploding atop the otherwise pristine snow.” These flourishes make the game feel less like a card game and more like a retelling of a past battle by old war buddies, remembering. The roleplaying and storytelling options allow players to inject more atmosphere into the game.

Furthermore, this game is a great game for roleplaying groups looking to spend a little time bonding, developing their collective empathy and teamwork, and warming up their storytelling muscles.

What do you think of a cooperative wartime game? Let us know in comments!

Featured Image Credit: Cool Mini Or Not
Image Credits: The Board Dames (With Permission)

TAGGED: cool mini or not, the grizzled, cooperative