Many a fractured fairy tail has given old characters a chance to reinvent themselves, but those Three Little Pigs–with their varying success at home defense–are getting to truly rewrite the book in the Grimm Forest. The tabletop game’s narrative sees the trio’s porcine kin taking up masonry, woodwork, and of course, thatching, for even more spectacular endeavors; competing to re-develop the mythic landscapes of Grimm’s Fairy Tails and other classic tomes into prime real estate. Winner earns the esteemed title of “Royal Builder.” 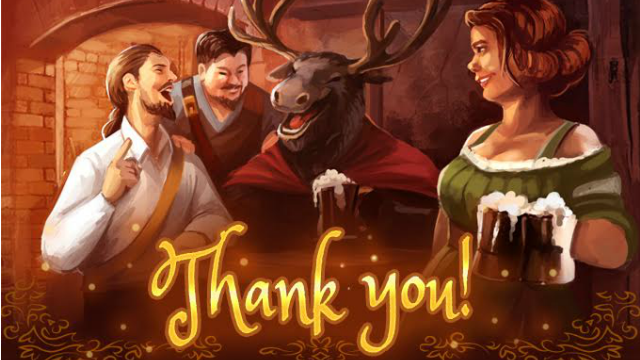 It’s a cheeky take on a whole trove of timeless stories. These hoggish builders call on a wide gallery of legendary characters–from Goldilocks and Rumpelstiltskin to Ali Baba and even Robin Hood–while managing the all-too-precious resources of brick, straw, and lumber. And naturally, the Big Bad Wolf isn’t ever too far away either, always threatening to blow players’ efforts.

Fans of Druid City Games have surely been keeping up with the Grimm Forest’s Kickstarter. Indeed, we covered it earlier this month. On April 14th, it tied off successfully, funding the game with nearly twelve times its campaign goal and pulling in upwards of $405,000. What we’re amped to announce today, exclusively, is that Druid City will be partnering with none other than Skybound Entertainment to bring this game to the masses. As the latter company’s VP Shawn Kirkham puts it…

“We’re excited to welcome the Grimm Forest to the Skybound Games family. Tim Eisner’s original take on well-known stories is an ideal experience for the fable-tales fandom, as well as fans of Skybound’s brand of creative storytelling.”

The excitement is mutual for both parties, as the game’s publisher James Hudson adds…

“To say that I am excited to work with the team at Skybound, would be a massive understatement. I couldn’t imagine a better partner to help bring the world of the Grimm Forest  to life. It is a dream to think about the areas the IP could go. Tim Eisner hit a grand slam with this design and I could not be happier with the support we received in our Kickstarter campaign. Our backers were so passionate about the project, and had so many great ideas that we were able to fit into the game.”

This fable-based tabletop title is slated for shelves later this year, but it’s still available through Druid City’s website for any who missed the campaign and still want to make a late pledge. The Grimm Forest will be the latest game to join the card-based Red Flags and Superfight, along with a variety of games based on the Walking Dead. Skybound’s delving deeper into tabletop gaming also comes fast after its announcement that it’ll be venturing further into feature films, too, with a big screen adaptation of the superhero saga Invincible.

Are you excited about this partnership? What other Skybound titles would work wonderfully as tabletop games? And most importantly, which Little Pig would build the best defenses against an invasion of Walkers? Share all your thoughts in the comments.