After four seasons, our favorite show about the afterlife finally addressed the concept of death in its penultimate episode. It had nothing to do with points, demons, and a broken judgment system. The Good Place‘s answer to what awaits us when we die was not an answer at all. It was a hope, one that spoke to the beautiful message about life that The Good Place has always been about.

The actual good place was not the eden the Brainy Bunch had longed for. It was its own form of hell, a perfect world that turns everyone into unfeeling “happiness zombies.” The kind souls who end up there become “glassy-eyed mush” people doomed to aimlessly wander for eternity without emotion, good or bad. There’s a shelf life to having all of your needs and desires met. Feeling good only means something if you can also feel bad. As Eleanor said, “Vacations are only special because they end,” and infinity has no ending.

Heaven being a nightmare wasn’t the most surprising twist the show has ever had. We thought paradise might end up being the other side of the same coin as the bad place. But what was surprising was the group’s reaction to this revelation. They didn’t try to fix the problem like they did the entire system that evaluates humans’ lives. Eleanor and the rest recognized that existence only has meaning if you might not exist someday. Michael echoed her words from season one: “Every human is a little bit sad all the time, because you know you’re gonna die, but that knowledge is what gives life meaning.”

The gang devised a way to give those unhappy souls meaning once again. It’s the same fate every one of us is destined to face. Hypatia and the rest can disappear into the unknown when they are tired of the good place. They can walk through a door and it will be over. Their time “in the universe will end.”

But what does that mean? What happens when any of us die? “What will happen when we go through it?” The Good Place didn’t have the answer to that, because no one does. 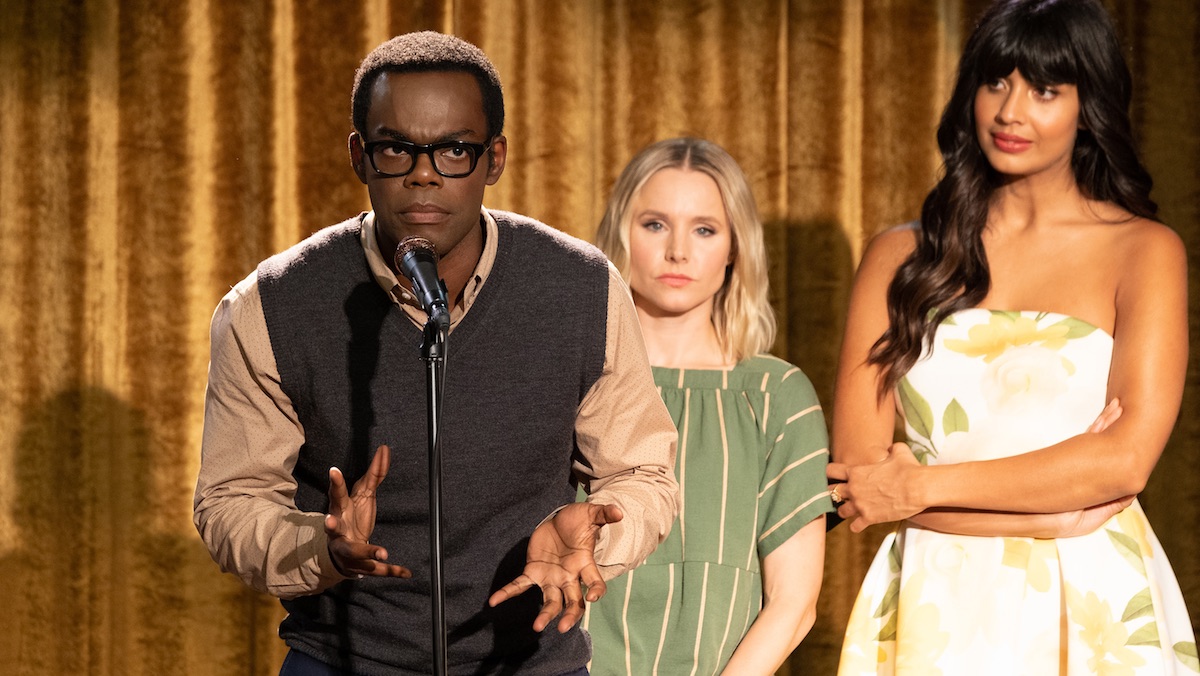 This series might be set in the afterlife, but it has always been about living a good and ethical life now, in our own difficult and painful world. For four seasons, the series has made it clear: you have no idea if you score “points” for doing good things, and even if you do, they might not matter. The only thing that matters is what you do here and now.

In its penultimate episode, The Good Place reckoned with the fact that an afterlife might not exist, something we can’t always admit to ourselves. We might walk through that cosmic door someday and vanish. It’s a scary idea. It’s why every human is a little bit sad all the time. But as always, the show offered a hopeful idea about what could await us.

Janet said they don’t know what happens when your existence ends, but “it will be peaceful.” At least we know our suffering and pain will end someday. 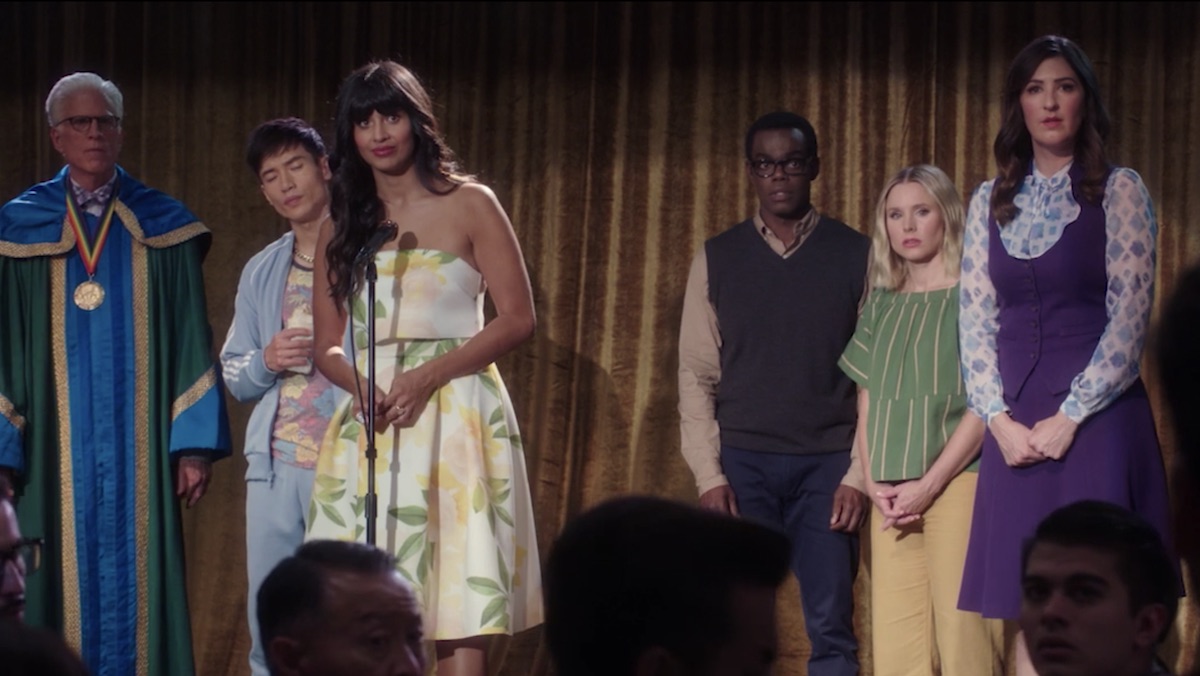 But if there is more out there, it seems like it won’t be a place where we drink stardust milkshakes and race monkeys in go-karts. As Eleanor and Chidi sat together looking out on a beautiful world she realized what paradise would really offer.

“This is what we’ve been looking for since the day we met—time. That’s what the good place really is. It’s not even a place, really, it’s just having enough time with the people you love.”

But we don’t know if we will. All we know is that we have our lives right now to spend as much time as the universe will give us with the people we still have. That’s what The Good Place has always been telling us. As Hypatia pointed out to Chidi on the dance floor, he wasn’t saved by some supernatural being, but by his friends. 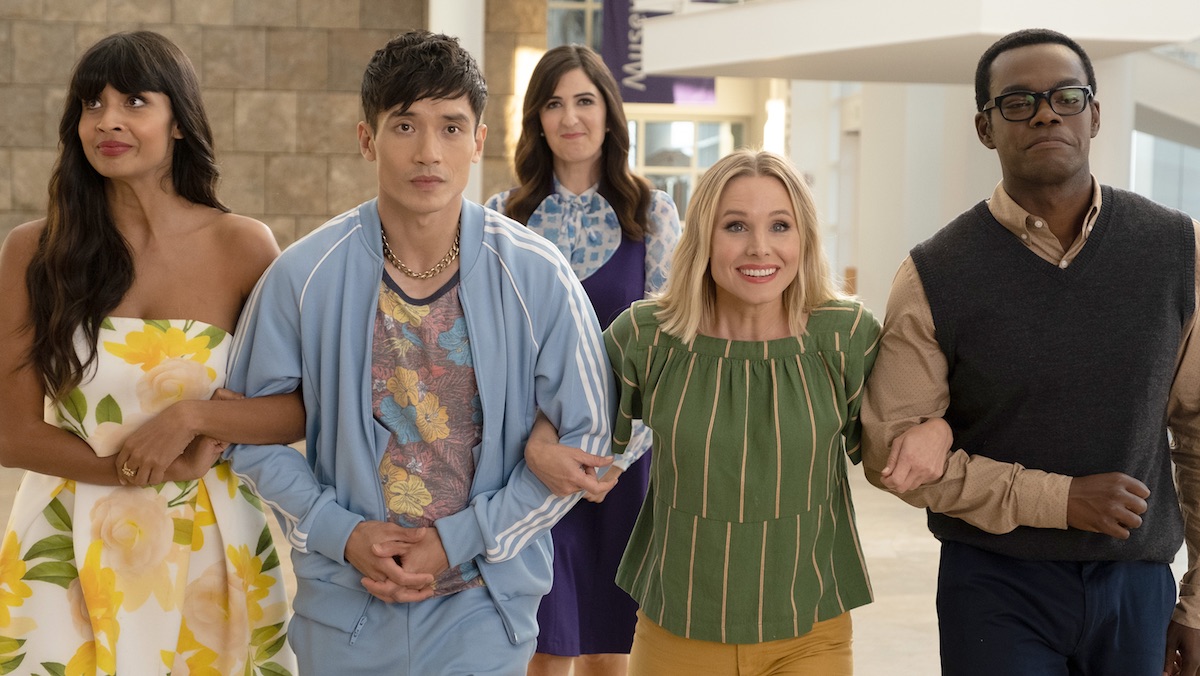 It might be that only salvation we ever find is in one another. Though life and death are scary, we are not in this alone. “What do we owe each other?” Everything. 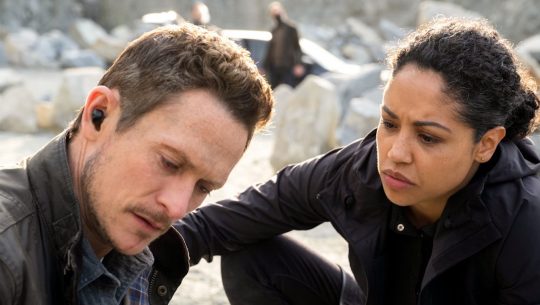