THE EXPANSE Cast and Crew Looks Ahead to New Terra - Nerdist

THE EXPANSE Cast and Crew Looks Ahead to New Terra

To say the people behind The Expanse are excited to bring back the series would be an understatement.

“When we got picked up—especially how we got picked up and by whom—it was just amazing,” said showrunner Naren Shankar, who’d previously completed the unenviable task of informing the cast and crew, one by one, that there wouldn’t be a fourth season of the show. But in a story that’s now familiar to fans, Amazon picked the series back up, saving it from cancelation and granting Shankar & Co. three more seasons. It was, for Shankar, “like we died and went to heaven.”

Moving to Amazon, which Shankar described as “the right place for the show,” meant much more freedom as far as language, content, and length went. In its previous format, episodes of The Expanse couldn’t fall short of or exceed a 43-minute runtime. There’s no such restriction on Amazon.

“It felt like there was room to breathe,” said Breck Eisner, who has directed some of the series’ strongest episodes and helmed the season’s 48-minute opener. That breathing room does make a difference; the pacing is significantly stronger than it was in previous seasons, with lengthier, more elaborate space battles and character interactions that flow seamlessly.

Much of this season’s action takes place on Ilus, the previously unoccupied planet now being colonized by Belters with some military aid (the Rocinante crew included). Though the change of scenery may be the most obvious difference plotwise, the characters are branching out a bit, with Martian pilot Alex Kamal getting in on the action on the ground level for the very first time.

“Alex finds himself getting his hands dirty,” said Cas Anvar, who plays Alex. Anvar noted that Alex’s previous arcs have had much more to do with the emotional side of his journey from Mars into deep space, including his estrangement from his wife and son. Now, though, “Alex ends up being caught up in a lot of the hands-on action” on Ilus along with enforcer Amos Burton (Wes Chatham), engineer Naomi Nagata (Dominique Tipper), and their leader, Captain James Holden (Steven Strait). 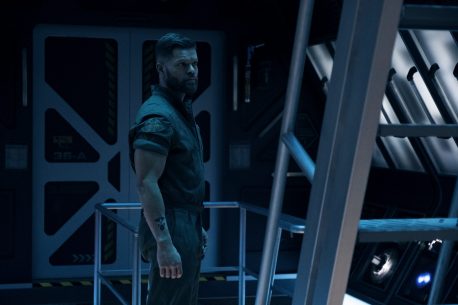 According to Chatham, Amos finds himself going in the opposite direction of Alex, dealing more with interpersonal issues and, for the first time, relationships. “Amos has a relationship with somebody that’s unlike any relationship he’s had before this season,” he said. (Here’s hoping it’s a romantic one; though Tipper and Strait’s chemistry has carried them through a multi-season relationship that continues into season four, that’s not something Amos has had much of.) There’s also, per Chatham, “ a level of vulnerability” we’ve never seen from this character.

Fans are lucky they get to see Amos at all; Chatham had plans to join another project when he got the call about the Expanse relaunch, and “This took priority.” This wasn’t quite the case for Tipper, though she had begun auditioning for other roles when she unexpectedly got the opportunity to return to a character she refers to as “second nature.” but that didn’t mean there weren’t new wrinkles for Naomi as she took to a planet’s surface for the first time.

“There’s quite a physical challenge to Naomi,” said Tipper, “that is very new and, I think, so frustrating, devastatingly frustrating for her, because she’s not a woman that’s held back by much. So this challenge that she goes into, stepping onto a new planet, she’s in for it, but it’s hard for her, so that was interesting to explore.” Tipper also described the character as being on a forever “identity quest,” something that’s beautifully illustrated in the season’s first episode as Naomi seamlessly code-switches between Belter Creole with her friend Drummer (Cara Gee) and standard Earther English with the Roci crew. 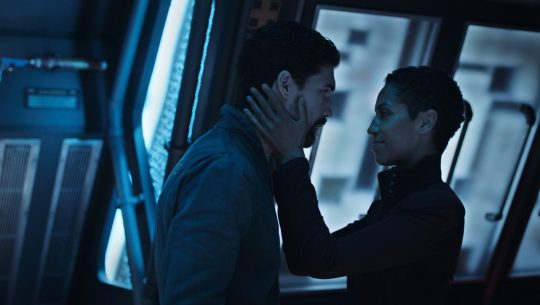 As for what’s in store for Holden, Strait noted that the character is in “a much more secure place” with his responsibilities as opposed to previous seasons, in which he sought guidance from the Dream Ghost iteration of Thomas Jane’s Miller. (Miller will be back in some form or another throughout the season, according to Shankar, so we have that to look forward to.) Holden’s arc is, to Strait, a very vulnerable one, which serves this episode, in which he’s undisputedly taking the lead on an unprecedented journey with no small amount of fear behind his eyes, and the series broadly.

It’s clear that there’s more than enough reason to get excited about The Expanse all over again. Luckily, we have two more seasons to look forward to after the fourth drops on Friday. And, satisfyingly, that’ll be the end of the Rocinante crew’s journey. According to Shankar, this story does have a resolution—and we’re pumped to make our way there with TV’s best space team.