Those are the final words of one of The Expanse’s most beloved characters—gregarious Martian pilot Alex Kamal (Cas Anvar)—slurred off-screen in the finale of the show’s fifth season, “Nemesis Games.” We don’t get to see him die; our final look at him is of Anvar, slumped in his seat on the racing ship The Screaming Firehawk, bubbles of CG blood pooling from his nostrils. He succumbed, tragically but suddenly, to one of the many risks the comparatively-grounded sci-fi series established in the beginning. High-G maneuvers in outer space can take a toll on your body, and even give you a fatal stroke.

It’s a shocking death for Expanse fans, though maybe not the most surprising when you consider the behind-the-scenes reasons for Alex’s exit. Last summer, several women came forward with allegations that Anvar had harassed them both in person and over social media for several years. Some stories even involved minors. After a quiet, independent investigation by the show’s production company, Alcon Entertainment, Deadline reported in November that The Expanse would move forward for a sixth and final season without Anvar.

Writing out such an integral part of the show’s fabric is difficult enough on its own. Alex was one of the four primary characters, the pilot of the former-gunship-turned-privateer-vessel Rocinante, someone who’s been with the show since the beginning. In Daniel Abraham and Ty Franck’s book series on which the show is based, Alex is still alive. 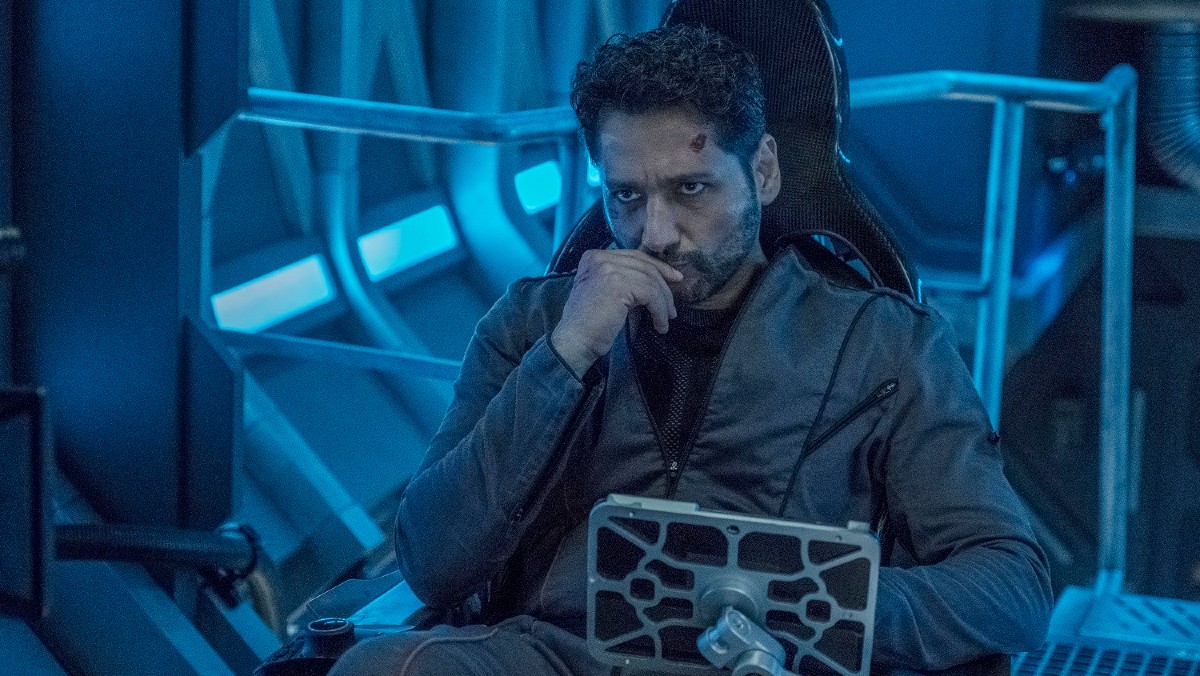 And what’s worse, the allegations and investigations seemingly came after the show already filmed its fifth season. It presumably ended with Alex surviving the harrowing events of the finale. (There are even some production photos floating around with Anvar in the party scene near the end of the season.) Look closely and you can see the seams. Careful reshoots and effects work retool the episode to manufacture his sudden death.

Abraham and Franck, along with The Expanse co-writer and showrunner Naren Shankar, did the best with what they had to work with. In radically altering a presumably-mostly-finished finale, they found a tragic, but thematically-fitting way to make the best of an unfortunate—but necessary—decision.

They even had a built-in framework for killing Alex in a way that lent itself to existing story points. High-G maneuvers are a huge risk for space travelers, a fact established in the show’s pilot. Alex spent nearly an entire season at the pilot’s seat of the Firehawk. He went full-burn to evade missiles; chased stolen Martian ships; and (in his last act) performed a series of difficult high-G maneuvers to slow down his ship. In doing so, his co-pilot, former marine Bobbie Draper (Frankie Adams), could complete their last-ditch rescue mission to save crewmate Naomi Nagata (Dominique Tipper). The last we saw her was tumbling from a damaged, explosive-rigged cargo ship, part of a trap from season villain Marco Inaros (Keon Alexander).

Alex’s death also lends a necessary pathos to Naomi’s journey throughout the season. All through season five, Naomi’s journey revolved around an attempt to reconnect with her son, Filip (Jasai Chase Owens). (This came after Naomi’s abusive ex Marco fully radicalized their son.) As much as she tried, however, Marco’s manipulations and Filip’s divided loyalties gave her no other choice but to abandon that family and sacrifice everything to protect her new one on the Rocinante.

The finale is all about proving the worth of the new family Naomi made for herself after leaving Marco. Her lover Holden (Steven Strait) defeats the Free Navy forces sent to destroy him. Her close friend Drummer (Cara Gee), who herself holds a torch for Naomi, betrays Marco and switches sides. And, of course, Alex gives his life to race to Naomi’s location and rescue her from the depths of space. It’s a sacrifice that proves Naomi made the right choice: where Marco merely used her as a prop to secure his budding interstellar regime, the Roci crew would literally die for her.

Alex’s death casts a shadow over the rest of the episode. And the sparsely-reshot scenes in the finale allow the audience to feel his absence. Naomi grapples with the guilt of knowing he died to save her. And Holden and potential-replacement-pilot Bull (José Zúñiga) contemplate the places on the Roci where Alex’s name lingers, from the ship’s dedication plaque to his favorite coffee mug. Amos, never one for sentiment, nonetheless gives him the best epitaph he ever could. “Making a choice to hold your ground to save your family? As far as last stands go, that’s the one I’d pick.” 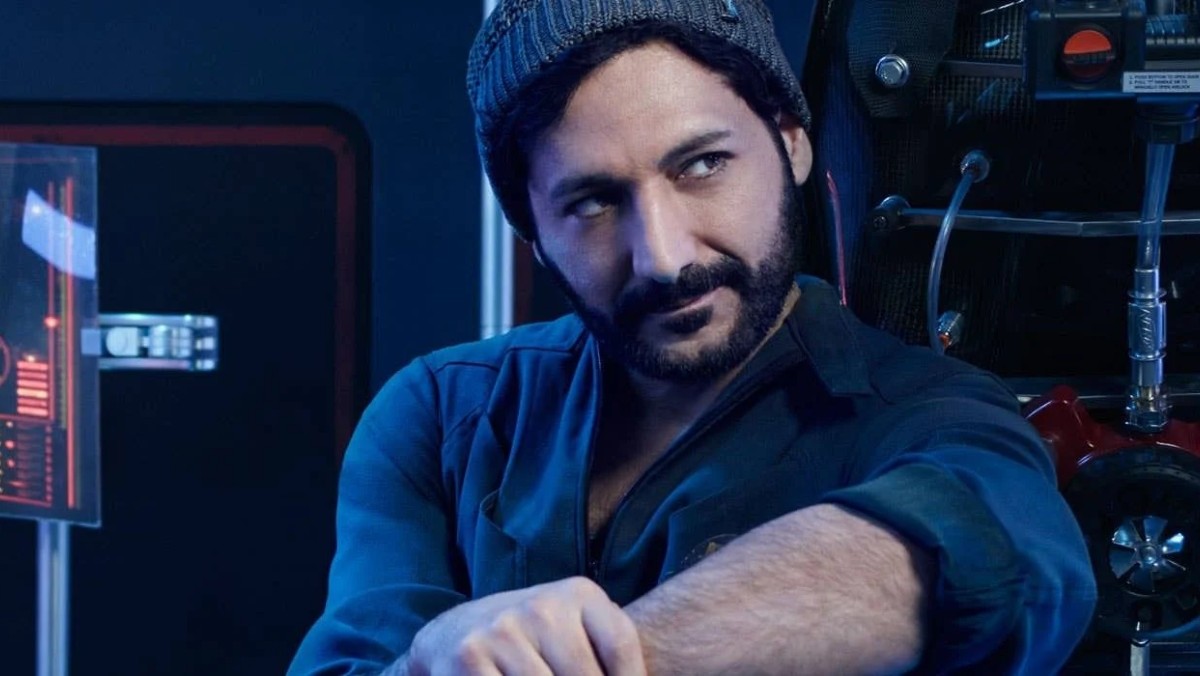 But the most fitting acknowledgment of Alex’s death comes when Naomi plays Holden the message she left for him. Something she recorded in case she didn’t come back from her quest to find Filip. “People come into our lives and they go out. Families change. It can be hard and sad, but we bear it as long as we don’t shut ourselves off from the new and wonderful things that come.”

It’s a message intended for us, the audience, as much as it is for the characters. Anvar’s alleged actions, as unconscionable as they may be, absolutely necessitated this decision. The situation required a narrative and production tightrope act no showrunner would envy.

But it’s hard to imagine a better way the writers and producers could have handled such a difficult situation. Alex’s demise comes swiftly and suddenly, but fits the story, and reminds us that the world of The Expanse is not one that comes with plot armor. And the loss of the Roci’s sunniest, most optimistic character is a tragic portent for the trials that are to come in the show’s final season.

GUNDAM WING Was the Big-Robot Gateway to My First Queer Crus...

Which of LEGEND’s 2 Totally Different Musical Scores I...