THE BLAZING WORLD Is a Fanciful Trip into a Scarred Psyche

One of the joys of any film festival is randomly picking a movie based on a logline and a photo. It’s always a crapshoot but there’s a better than average chance it’ll be something great. The Blazing World was one of those experiences for me at Sundance 2021. The official photo plus phrases in the description like “journey down the smokiest and scariest corridors of [main character’s] imagination” was all I needed to hear. And I’m thrilled to say it ended up as one of my favorites from the entire fest. 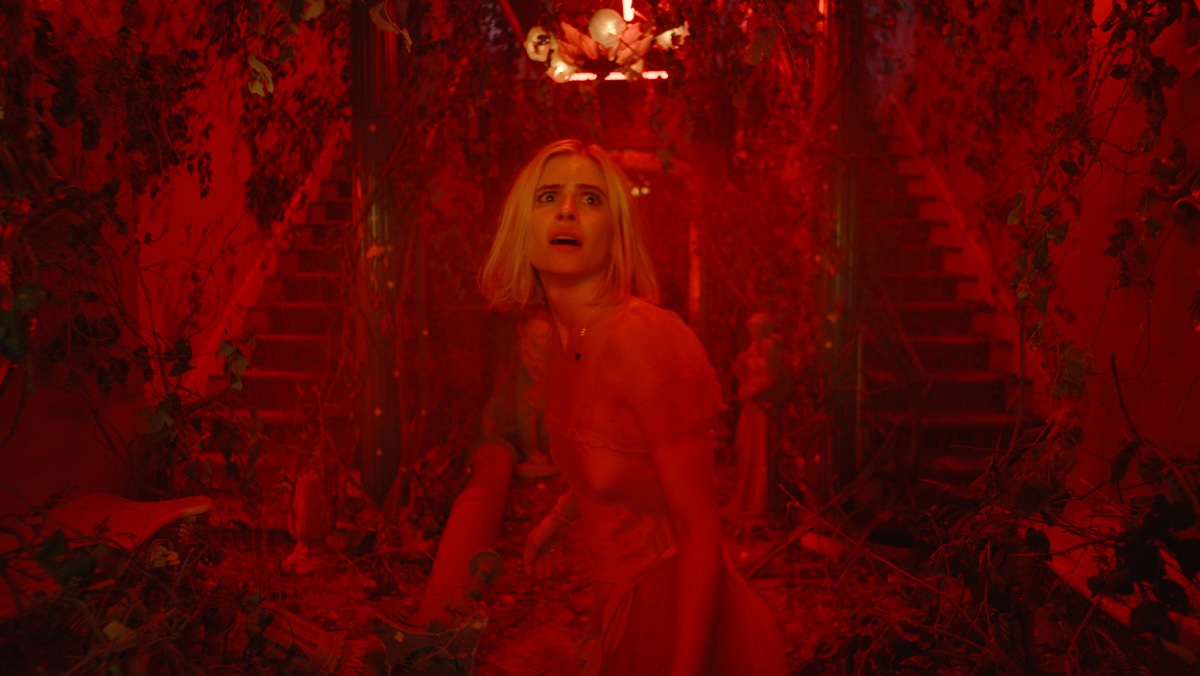 Writer-director-star Carlson Young adapted her own 2018 short film of the same name. It’s an earnest and uneasy look inside the deeply scarred psyche of a woman with familial and personal trauma. Young expresses this journey through fantastical revisions of the rooms and hallways of a large home. It’s a really cool way to equate childhood fears with grownup anguish. It goes a bit Lewis Carroll, and the metaphors may be too heavy-handed for some, but it really worked for me.

Young plays Margaret, a 20-something whose twin sister died tragically when they were both children. Margaret has had a hard time dealing with the loss, not least because her parents have their own issues. Her mother (Vinessa Shaw) spends her time talking to herself, trying desperately to cling to the past; her father (Dermot Mulroney) has violent mood swings and drinks heavily to forget. Margaret has frequent terrifying visions and continues to see a scary man (Udo Kier) beckoning her toward a large portal. Like ya do.

When her parents inform her they’re selling their massive house—the same house where Margaret’s sister drowned—Margaret returns home, sees some friends, and has awkward exchanges with her parents. But in packing up her old things, she sees the need to confront her demons and goes into a nightmarish fantasy version of the house to do so. The scary man, a demon of sorts, tells her she needs to retrieve three keys from three different other demons to find her sister and get out the other side.

I’m not gonna say The Blazing World isn’t a weird movie, but it keeps consistent with its own rules and each bit of her fantasy journey relates directly back to her real life. She first seeks a key from a masked version of her mother, hungry for any kind of memory of times gone by. The second guy resides with a self-destructive monstrous version of her father, ready to lash out at any moment. And the third, well that’s worth seeing the movie to discuss.

Using stark lighting, scary jump-cuts, and gloomy synth music, Young shows us everything we need to know about how Margaret sees herself and the world. There’s something of a Neon Demon vibe to the presentation which jives really well with the fantasy setting. We get why the character would create this imaginary world, but also why she needs to break out of it. Young’s performance is raw and fragile and Udo Kier gives exactly the kind of scary Udo Kier performance you want. An excellent casting choice to represent literal inner demons.

I really dug The Blazing World and I hope it finds the audience it deserves. And I really can’t wait to see what Young’s next film will be.

For more of our reviews from Sundance 2021, CLICK HERE.