The Best Board Games of the Year - Star Wars: Rebellion - Nerdist

The Best Board Games of the Year – Star Wars: Rebellion

2016 turned out to be one of the biggest years for board games. We saw some of our favorite developers hit the shelves yet again with a couple of fresh faces thrown into the mix. It was hard to choose just a couple of games to spotlight on the list, but here is just one that you need to play. Stay tuned for the full list coming soon.

In a year of absolutely fantastic titles, Star Wars: Rebellion might have fallen off of your radar. Due to its early calendar release and the tsunami of buzz surrounding Gen Con and Essen, this stellar Star Wars epic seems to have been edged just outside the limelight. Get this one back to the table and capture that Rebel scum, as this is most definitely game of the year material.

Rebellion is noteworthy because it draws its DNA from two contrasting genres of play. It’s part “dudes on a map” where you’re commanding large forces of plastic troopers and spaceships, and part hidden movement focused on the cat and mouse game of hide and seek. This clashing of large scale warfare and military operations with a seek and destroy reconnaissance exercise is thrilling. AT-ATs and Star Destroyers and Death Stars, oh my.

As the Rebellion, you’re trying to keep your base hidden and run out the clock. That time pressure on the Imperials represents the tipping point in guerilla activities driving such a divide among the Empire that victory is foregone for the Tauntaun riding yokels. You want to misdirect and strike out with hit and run missions, completing incremental objectives along the way to jack up the pace of that timer.

As the Empire, you’re spreading out and eviscerating local populaces, squishing hearts and minds, and cranking out new technology to further your plans. There’s much to get distracted by (“What do I look like a scoundrel? Of course, I’ll build a second Death Star”), but all of the military hardware and production might is secondary to locating that hidden Rebel base.

The core system driving the experience is brilliant. Each side has a pool of leaders that evolves during play, and you utilize these leaders as workers to accomplish missions from a card pool. It’s dynamic worker placement with familiar characters like Luke and Vader attached. You have to balance the concept of embarking on these objectives with the fact that you need these same leaders to move your troops about the board. This results in a tight action economy where you want to accomplish much more than you realistically can. 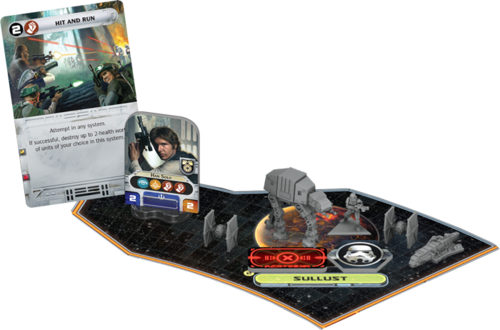 Much of the joy of Rebellion arises from appropriate yet unique narrative outcomes. It all feels so consistent and apropos to the original Star Wars trilogy while still spinning out of control and offering new experiences. Obi-Wan may be captured and turned to the dark side, becoming a leader the Empire can utilize for the rest of the game. Wedge might lead a huge assault on the Death Star right after it blows the hell out of the walking carpets on Kashyyyk.

Luke may not even show up during your game and Boba Fett may prove the deciding factor in a key mission to capture Jan Dodonna. This sense of unpredictability and variation makes for a developing story that is captivating and all your own. You feel like you’re rewriting your favorite fiction, but the quality always stays extremely high. It’s as if George Lucas–the ’77 version, not ’99–is sitting right next to you in a script jam session and you’re dropping gold albums. Rebellion is anything but a fan-fic.

If you haven’t played Star Wars: Rebellion then you’re missing out. This is one of the easiest choices for best of the year and can be safely recommended to almost any type of gamer. Get out there and save the galaxy. Or if geriatric dudes in robes are more your crowd, get out there and destroy it.

Have you played Star Wars: Rebellion? What do you think of it? Let us know in the comments below!