The Avengers Roleplay Guardians of the Galaxy - Nerdist

The Avengers Roleplay Guardians of the Galaxy

Have you ever wondered what your favorite superheroes do in their spare time? Does Tony Stark play badminton? Perhaps Bruce banner trims bonsai trees. Would Steve Rogers take couples cooking lessons with Bucky?

Well the bluandorange tumblr has a theory: The Avengers are roleplaying characters from Guardians of the Galaxy. Stay with me here.

What if Bucky Barnes decided to DM a roleplaying game for the Avengers? He’d sit his pals down and ask they who they would like to play. Tony Stark, being his usual self, would enjoy playing a handsome, wise-cracking goof so he creates Peter Quill (Star-lord); a smooth talking gadgeteer who sees himself as the leader of the group. Bluandorange proposed that Natasha would create Drax, but I think she is more likely Gamora. Two badass ladies raised from childhood to become master assassins with hang-ups about dancing? It’s no coincidence.

I think Thor would be behind Drax’s creation. Considering he is an alien who might not get the subtitles of earth culture, Drax would be right up his alley;  a super strong, loyal fighter who doesn’t get metaphors.

Now here is where things get kooky. Steve Rogers decides to troll his good friend Bucky by creating Rocket. A short, crass Raccoon whose obsessed with guns; just about Steve’s opposite. 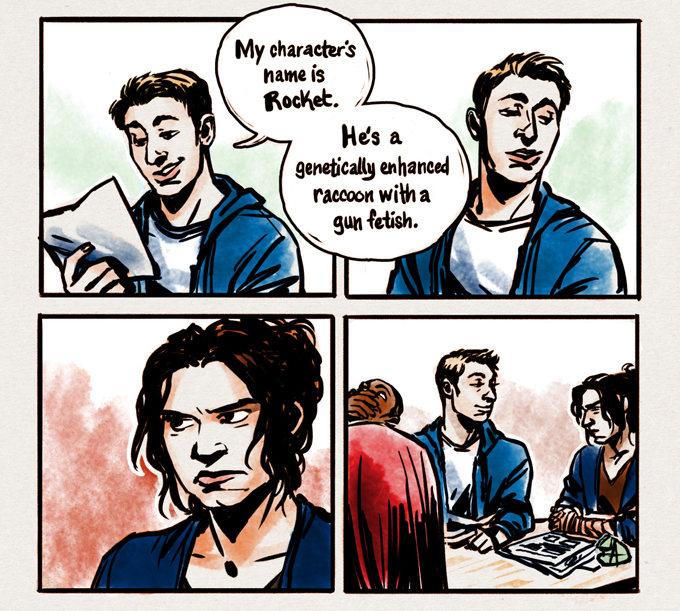 We’ve all been there. That one player who decides they are going to throw seriousness out the window and play something entirely silly. Natasha’s face says it all. it would create a downward spiral for the rest of the players.

You can debate Groot’s origin. According to tumblr, Sam Wilson creates the 8 foot tall taking tree because he gets bribed into playing and decides to min-max as much as possible. High strength at the cost of his ability to communicate and his being a tree and all. There is also an argument that Bruce banner is behind Groot as he can’t be troubled to play. By creating a character who can only say “I am Groot”, he doesn’t really need to pay any attention to the game. Bucky who would probably be questioning his choice of activity by this point, would sigh in despair as Clint Barton creates Yondu Udonta, a blue skinned hunter who controls his arrows by… wait for it… whistling. 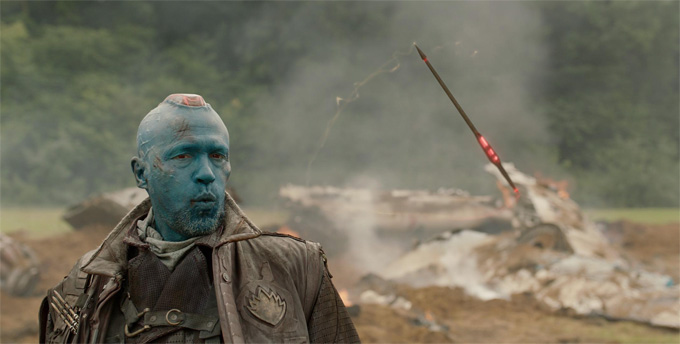 I have to say, watching the Guardians of the Galaxy with the roleplaying theory in mind brings the film to a whole other hysterical level. Just think about how Star-lord distracts Ronan the Accuser with a serenade. It smacks of Tony rolling a crit when trying out a crazy last ditch plan.

Bucky: “Ronan raises his hammer and shouts!”
Tony: “I start singing ‘O-o-h Child‘ by The Five Stairsteps and dancing.”
Bucky: “Wait…what? (over the sound of a rolling die)
Tony: “Natural 20!”
Bucky: (stares for a moment at the die) “Sigh…Ronan is distracted by your musical prowess.”
Tony: “and sweet dance moves!”

So what do you think? Does Bluandorange have something here? Which characters would you pair up? Let us know in the comments below!

TAGGED: The Guardians of the Galaxy, Marvel, The Avengers, Movies, Comics, tumblr, roleplaying