The Arcade Classic Space Invaders Rolls Its Way Onto the Table

The premise of this new dice game is exactly the same as the video game and just like the original, you can play it by yourself. A grid of multi-colored Space Invaders are descending to the planet and it’s up to you to blast them from the sky. Just about all of the aspects you’d remember from the arcade classic have been abstracted and provided in paper form: UFOs flit across the top providing bonus points, lasers fall from ships blocking your attack routes, bunkers protect you from lasers, and it even emulates the columns moving faster as you blow up aliens.

Gameplay is extremely simple. You first roll the smaller laser dice a few times to determine which columns are under fire. You then roll 8 chunky Invader dice and begin blowing up aliens. A blue cannon means you can cross off a blue ship, a green cannon means a green ship and so on. Bunkers let you eliminate a laser die which can open a column you want to shoot into; this is important because any dice that can’t be used deal damage to the player, taken by crossing off empty spaces around the board. If all those spaces fill up you explode and we all get brain probed. 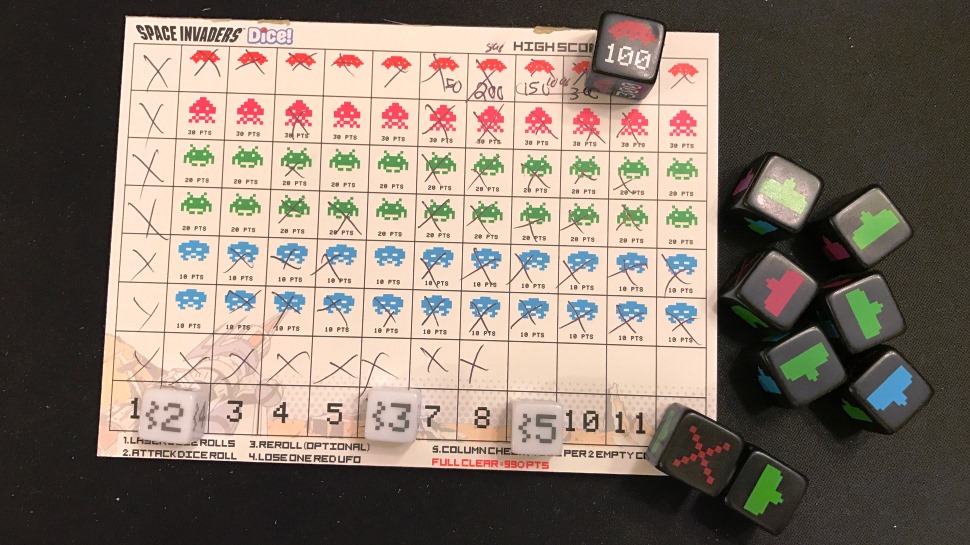 While simple, reaching a high score means navigating this probability puzzle and knowing when to push your luck. You can reroll unused dice once but if you still can’t use them it’s double damage for you. It’s tempting to blast out an entire column as fast as possible to shoot those UFOs down, but the more columns you empty the less dice you get to roll (this is that system that simulates the aliens moving faster). Ensuring that there is always a target for green cannons is a good strategy, but it will slow you down. A different UFO is crossed off every round so the pressure is on to get those big bonuses.

All of this is true whether you’re playing by yourself or against your opponents, but multiplayer adds some clever twists. There are 2 multiplayer modes: in one, players simply take turns rolling dice and taking their turns as normally. The game is fast enough that this doesn’t bog down too much, though the rulebook recommends a 2nd copy for 4 players. In the second multiplayer mode, players will draft their dice from the pool. It gives the game a sharp mean streak as suddenly you can snatch up the dice your opponent needs and force them into mega damage.

Space Invaders Dice is simple, but it’s fun. Pushing for high scores is addicting and it’s an easy game to bust out any time you have 15 minutes to kill. Look for me playing it at airports in the near future.

Would you ever play a board game by yourself? Let us know in the comments!