Flash back to summer 1995 for a minute. I was 5 years old, on my way to see Joel Schumacher’s Batman Forever. It was my first-ever Batman film, and what I saw that day — to my 5-year-old eyes — was the single greatest movie of all time. Every scene, every character, every vehicle; my mind was blown. I bought it on VHS the day it came out and watched it over and over until the tape started to wear out. Two years later, my childhood prayers were answered and I got to see the sequel, Batman & Robin. To my then 7-year-old self, it was like a dream come true. Flash forward to 2015: Christopher Nolan’s trilogy has come and gone, I’ve seen all of the Tim Burton films and Adam West classics a thousand times, but guess which movie is my favorite? Yep…Batman Forever. My childhood obsession has carried into adulthood, and I just can’t seem to shake it. I often find myself running to defense of Batman Forever and even Batman & Robin whenever talk of “the greatest Batman” comes up. But in my eyes, Batman Forever is actually a really good movie. Maybe even a perfect Batman film. 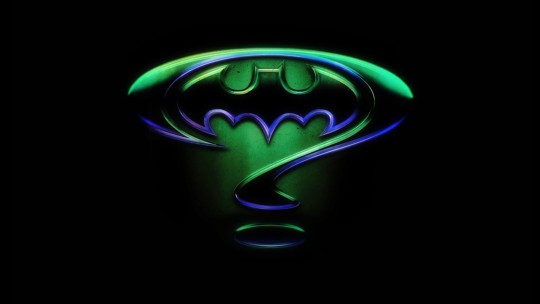 First, there’s the soundtrack. (Take a listen if you’ve never heard it.) Using Danny Elfman’s soundtrack as a precursor, this Elliot Goldenthal upped the proverbial ante, adding a moody swirling of orchestral emotion, all led in with an iconic tuba and the build of trumpet fanfare as the logo appears on the screen. It’s not a deconstruction or a mimicry of Elfamn’s previous score; if anything, it’s a complement to the work he’s done before. Don’t believe me? Just take a listen. 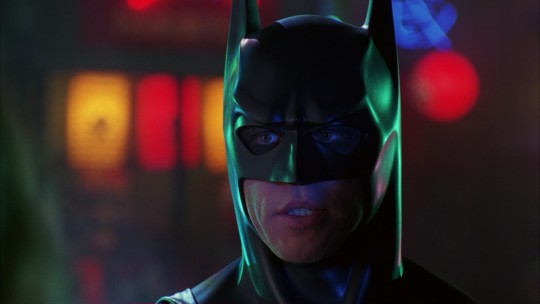 Sure, some may argue that Batman Forever’s opening credits are simple, but that’s exactly why they’re great. I used to stand at one end of the living room, tie a makeshift bed sheet cape around my neck, and RUN toward the TV as each actor’s name literally flew out of the darkness and into frame. Sure, opening credits have come a long way since the 90s, but this had to have been one of the coolest intros I’d ever seen as a 5-year old: all visuals and bombastic sound. In fact it still gives me goosebumps…and I’m 25. 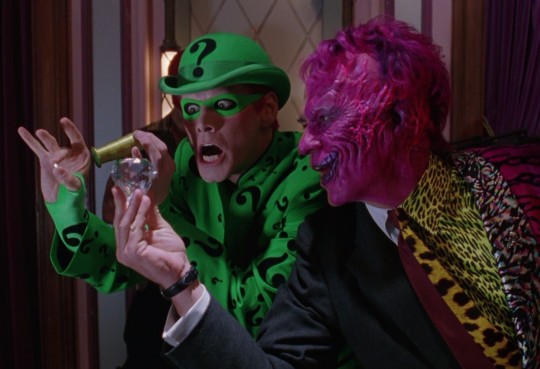 When one considers the camp and circumstance Batman Forever builds its universe upon, there hasn’t been a better-casted Batman movie…ever. Val Kilmer’s portrayal as Bruce Wayne/Batman is the greatest choice for Batman possibly ever. In 1995, Val Kilmer WAS Batman. His take on the billionaire playboy with some serious psychological issues arguably nailed down the inner mental life of Batman upon which later actors built their own portrayals.

And then you have Tommy Lee Jones as Two Face. Schumacher’s Two Face was a little bit Joker-esque, but Tommy Lee Jones brought an iconic portrayal to the role. Whether he was shooting people or robbing banks, he was letting out a chuckle or some emotional jibber-jabber that ultimately highlighted the maniacal nature of his character and played off the pop nature of the film itself. And Chris O’Donnell as Robin? While I’ll admit he was way too old for the role looking back now, he was a great addition to the story as a complement to this dark and distressed Batman.

But how could be not highlight Jim Carrey’s take on The Riddler? His spin on this classic villain still stands as one of the greatest Batman villain portrayals in history. His psychotic camp and outrageousness was the summation of the film in and of itself. In short, this cast is the best that the mid-90s had to offer, and it paid off. 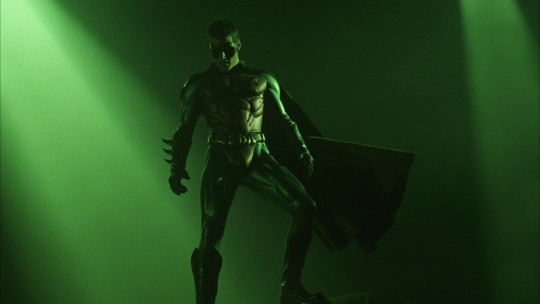 Now, the biggest complaint I hear about both Batman Forever and Batman & Robin, is that they’re too cheesy, or not serious enough. But that’s the point of these movies! They were never meant to be serious. The biggest problem for Batman Forever was that it followed Tim Burton’s films in the first place. Burton’s Batman and Batman Returns were so dark and gritty that when Schumacher took hold of the franchise, everyone expected a similar approach.

In reality, if you cut out the Burton films from the equation, the only previous live-action Batman was the classic, cartoony Adam West version. So in many ways, Schumacher’s films are a subtle nod in appreciation to those versions of the character. Whether it is the overuse of puns, cheesy gratuitous ass-shots, or the over-emphasized colors and so forth, this film goes for the classic TV show vibe and builds upon it. Robin even blurts out the iconically cheesy line, “Holy rusted metal, Batman! The ground, it’s all metal! It’s full of holes! You know…holey!” So when fans take this movie too seriously, it’s astounding to me that they’d overanalyze it so much. It was made to be cheesy. 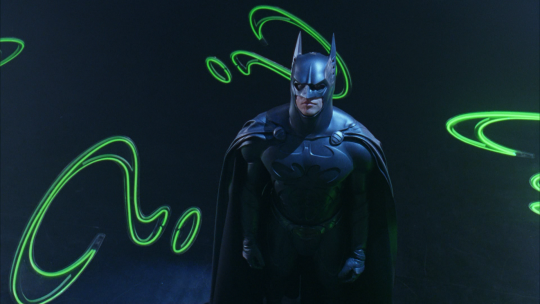 Lastly — and this should come as no surprise — but the greatest part about Batman Forever is the nostalgia factor. For countless fans, not just me, Batman Forever is an iconic piece so representative of the mid-90s that harkens back to a different time of movies and superheroes. Before Bryan Singer — in our humble opinion — changed the superhero genre with X-Men, this is what superhero movies were…and that’s what I love about them. Don’t get me wrong, I love the current scope of superhero films too. But watching Batman Forever takes you back to a simpler time. Enjoy it. Don’t nitpick and overanalyze it. That’s how you make Batman Forever a good movie. I’ll gladly read your angry comments below, but it won’t change a thing.