Who Has Thanos Fought Besides The Avengers?

Thanos has been the “Big Bad” of the MCU ever since the post credits scene of The Avengers, before finally making his play in Avengers: Infinity War. But for many years, the so-called “Mad Titan” wasn’t even thought of as one of the primary villains for Earth’s Mightiest Heroes in the actual comics. That really didn’t happen until the events of the 1991 mini-series The Infinity Gauntlet, which catapulted him to top-tier baddie.

So if he wasn’t fighting the Avengers, who did he take on? And did he handily beat them, or did these Marvel heroes get the upper hand? The answer may surprise you. Here are some of the most memorable Marvel Comics battles between non-Avengers characters and Thanos, before he was much of a blip on the Avengers’ radar.

The ultimate artificial life form, Adam Warlock had an ongoing feud with Thanos in the pages of his own series. But it would take several years before he would defeat the big purple guy for any considerable period of time. And it didn’t happen in the pages of his own comic but in the team-up book, 1977’s Marvel Two-In-One #55. Without the help of Spider-Man and the Thing though, he couldn’t have done it. 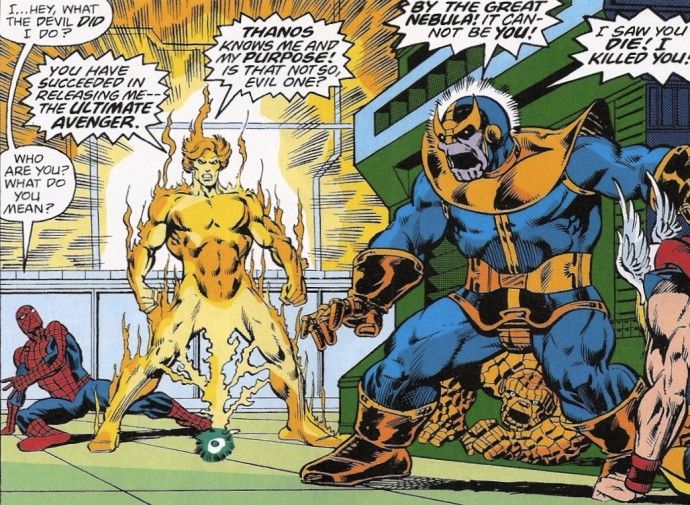 As one can imagine, the Thing and Spidey get whupped badly by Thanos, who is way stronger. Then, Deus ex machina-style, Spider-Man manages to free Adam Warlock from the Soul Gem, after which Adam’s soul uses his vast powers to turn Thanos into stone. 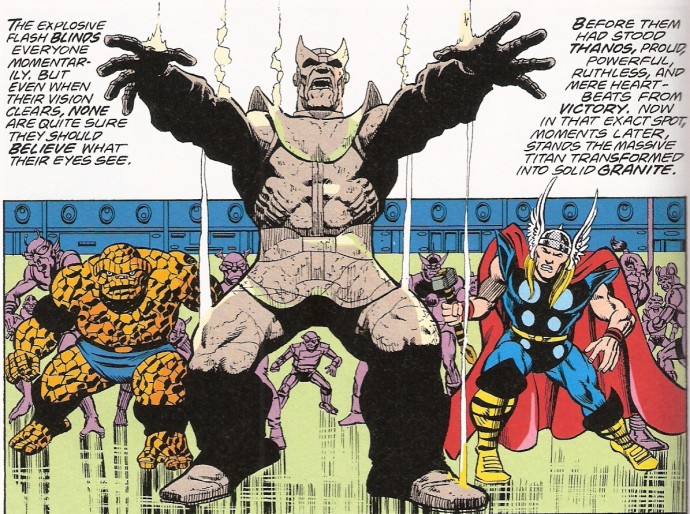 Thanos was turned into a stone for thirteen whole years, which is an eternity in comics. He wouldn’t come back until 1990, a year before The Infinity Gauntlet. We say Adam Warlock is the clear winner in this battle.

After an absence of over a decade, Thanos made his big comeback in 1990, in the pages of Silver Surfer. He was the primary antagonist in that book, and his creator Jim Starlin re-positioned Thanos as the Marvel Universe’s ultimate bad guy. 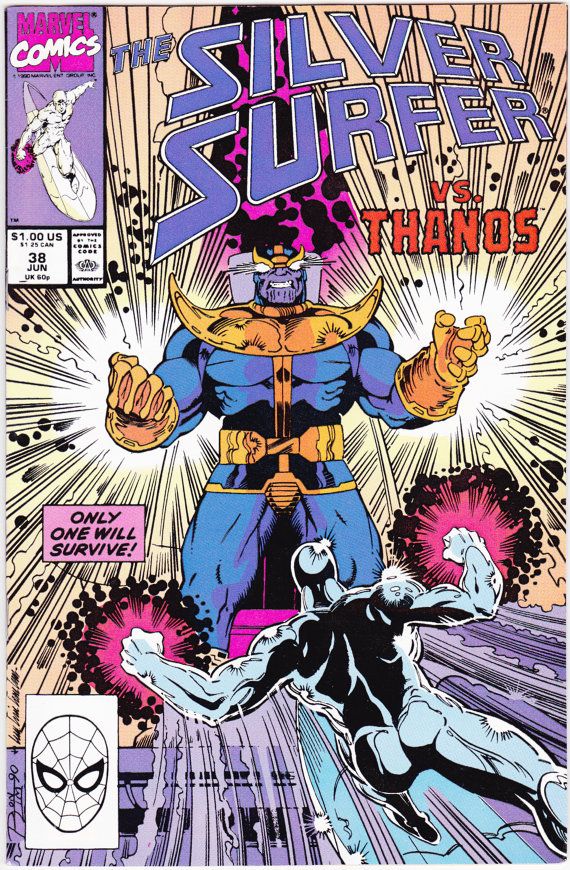 Surfer had the Power Cosmic, granted to him by Galactus himself. But despite that, the Mad Titan kicked his butt every time. In the pages of Silver Surfer, all of their fights ended in stalemates, but with victory leaning towards the Thanos side. Let’s put it this way — Thanos was able to get all the gems for the Infinity Gauntlet during his time as Silver Surfer’s #1 baddie. So the Surfer dropped the ball here. 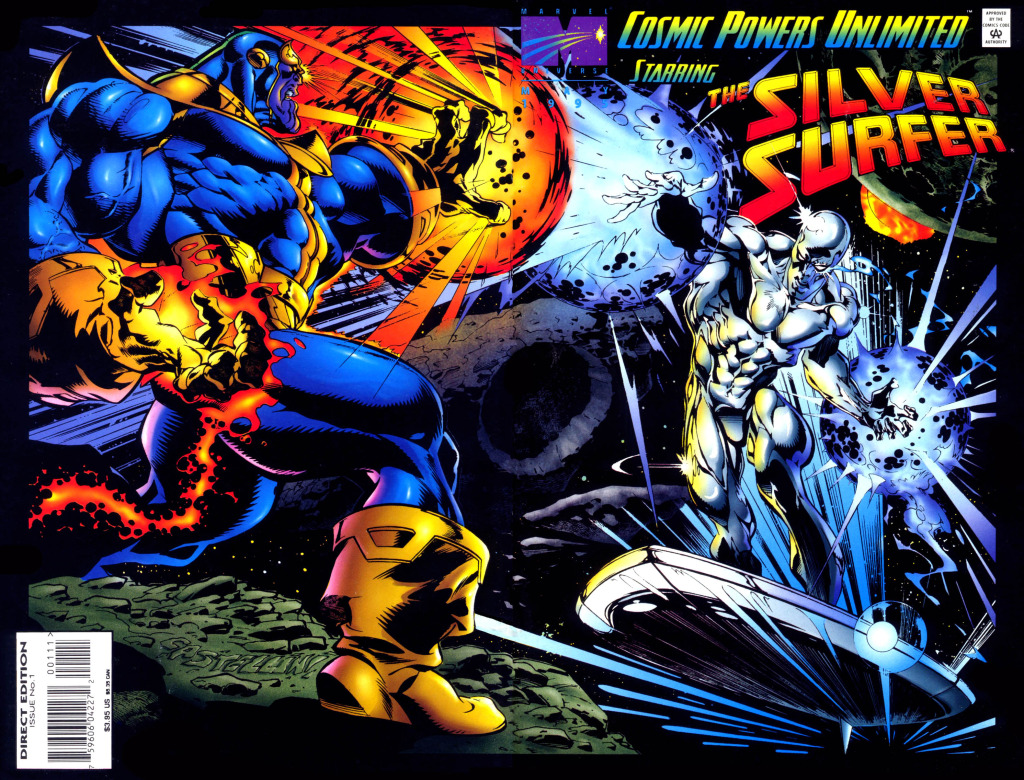 Thanos. In fact, Thanos trounced Surfer so badly in the Cosmic Powers Unlimited #1 (1995), Thanos took his busted up body as an offering to Death herself. But then Death chose the Silver Surfer as her consort over Thanos, as he was responsible for the deaths of so many while working for Galactus. But even with that accidental burn by the Surfer, Thanos still unquestionably handed his shiny butt to him.

One of the least likely heroes to take on Thanos had to have been Ka-Zar, lord of the Savage Land. For those unfamiliar, Ka-Zar is the loincloth-wearing, Tarzan-esque dude who protects the mysterious lost world of the Marvel Universe, complete with dinosaurs and other prehistoric creatures. 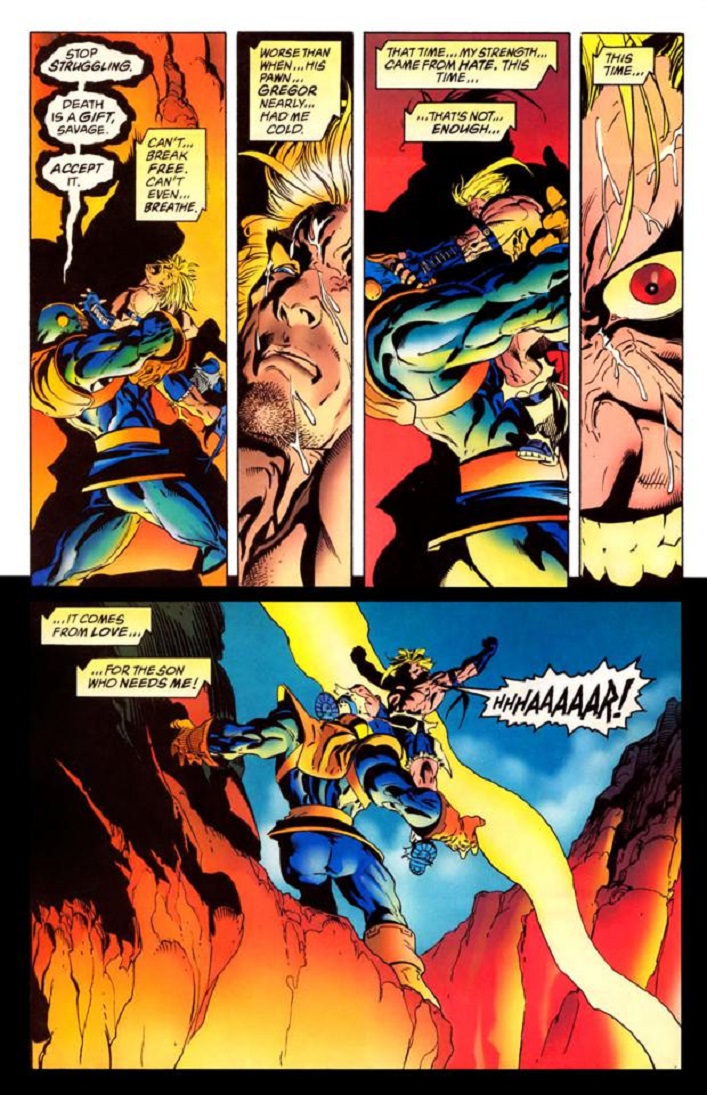 In Ka-Zar #11 (1997) Thanos and Ka-Zar wind up fighting on a precipice above a lave flow. Thanos tries to choke Ka-Zar to death (which should be easy, as Ka-Zar is basically just a dude). However, he thinks about his child and how he still needs his daddy or something, and this gives him the extra push he needs to get free and punch Thanos a few more times, leading Thanos to fall into the lava below. 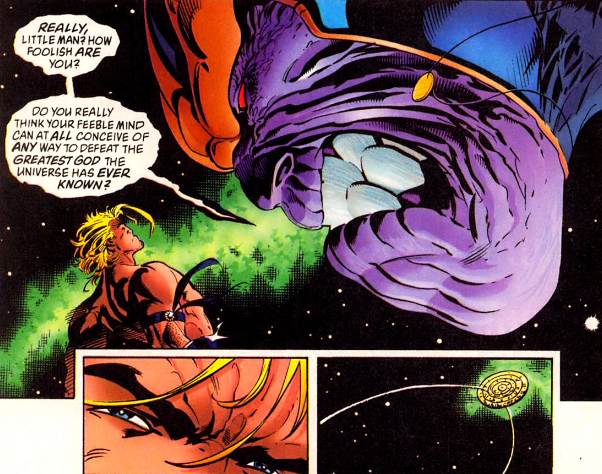 The lava doesn’t kill Thanos, because duh. But as he wanders off injured, he’s then killed in an ensuing nuclear explosion. It’s been suggested that this wasn’t actually Thanos, but one of his clones. Whoever it was, he got beat by a dude in a loincloth with no real powers. But still, that means the winner was definitely Ka-Zar.

Spider-Man (and Hellcat. And Some Little Kid)

OK, this story is technically not in the main Marvel Earth, a.k.a. Earth 616. It was published in 1979’s Spidey Super Stories #39, which was Marvel’s Spider-Man comic for very young kids. Spidey teams up with the heroine Hellcat in this issue to take on Thanos, who is looking for the Cosmic Cube, better known as the Tesseract in the MCU. Hellcat had to be called just “Cat” in this comic, so little kids wouldn’t have to be exposed to the word “hell.” 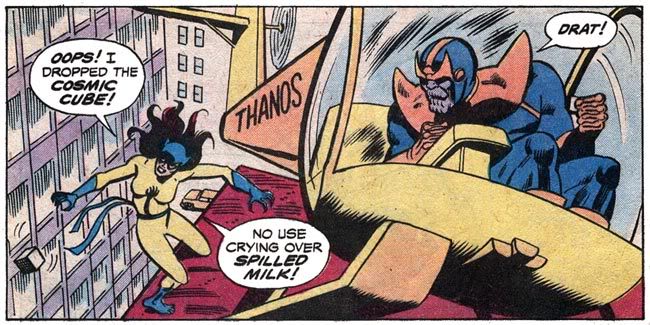 Thanos, who is flying around New York in his Thanos-copter (yes, really) is going after the Cat, who has the Cosmic Cube for totally unexplained reasons. As he chases her across rooftops, and she drops the Cube and some random kid gets it. The issue then turns into a Tom and Jerry cartoon, as Spider-Man, the Cat, rando kid and Thanos keep getting the Cube and losing it. Thanos grabs the the Cube and uses it to create an earthquake, but silly Mad Titan, he loses his balance and drops it, letting the good guys carry it away. He is then carted away in handcuffs like a perp on Cops. 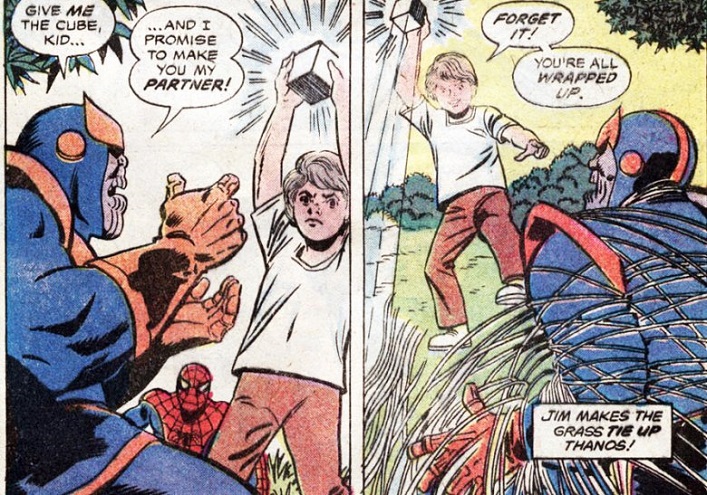 The readers, who forever have this gem of a Thanos story to refer to whenever anyone says he’s unbeatable. He was beat by a skateboarding kid, a hero who couldn’t use her actually superhero name, and Peter Parker.