Pets always have a huge part to play in horror movies. What would The Silence of the Lambs be without Precious, the Bichon Frise? Or Alien without Jones the cat? Of course, there’s the GOAT horror pet. That’s Winston Churchill from Pet Sematary. So what if you want to adopt a pet that reminds you of one of these horror icons? There’s now a way you can. Via Bloody-Disgusting, we’ve discovered a service called Texas ChainPaw Massacre. It helps finds pets to adopt that look like iconic animals from horror cinema. 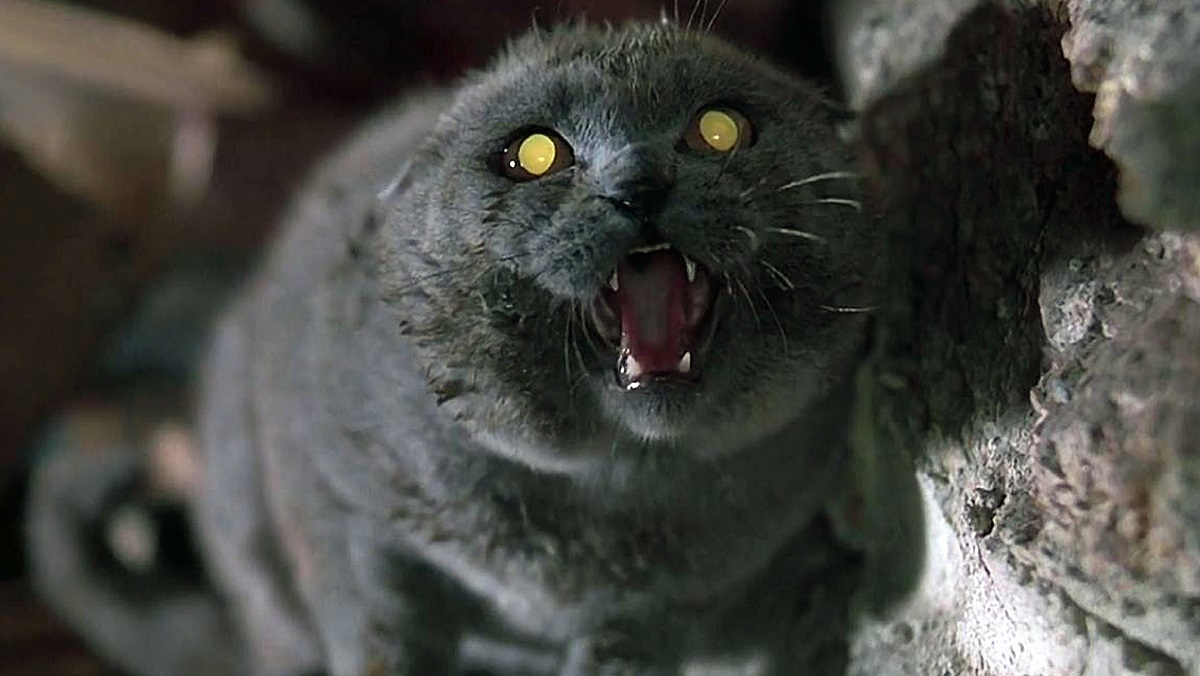 Texas ChainPaw Massacre began in April of 2019, by two sisters who love pets and horror movies. They scour the internet for pets that are currently looking for a home, matching them with ones fans have seen in horror movies throughout the years. They share links to adopt these pets via their Twitter and Instagram.

Their official tagline is “Saving animals one horror movie at a time” The mission statement of Texas ChainPaw is simple: “we find adoptable animals in shelters, rescues, or foster homes that are doppelgangers of often unappreciated animals in horror movies.” Down below is a just a few examples of our favorite good boys and girls.

Does horror cinema get more iconic than John Carpenter’s Halloween? In that film, Lester the dog senses Michael Myers prowling about. Maybe his lookalike Ambrose can protect you from silent slashers too.

4 more days till Halloween (Silver Shamrock 🎶)!!
Lester tries warning that Michael's home in "Halloween" (1978) but it's just another case of a brave good boy whose warnings go unheeded. Adopt AMBROSE & listen when he is trying to tell you something!https://t.co/icOkuqwLR4 pic.twitter.com/00wFsVu760

Rufus from Re-Animator was about as real as Salem from the ’90s version of Sabrina. But this Salem is for sure a real feline.

Happy Birthday to the super awesome @jeffreycombs! We're honoring him today by featuring the famous Rufus, who is absolutely 100% definitely played by a real cat in "The Re-Animator" (1985). Adopt your own actual 100% definitely real cat, SALEM!https://t.co/HyXNpCOwf0 pic.twitter.com/BEDNnshJXN

Dogs can sense when your teenage brother is turning into a vampire. The Lost Boys taught us that.

We've said it a trillion times: LISTEN TO YOUR PETS. Nanook tried to warn Sam about those pesky vampires in "The Lost Boys" (1987) if only he had just listened! Listen to BUCKY JACK when he warns you, probably not of vampires, but hey ya never know!https://t.co/ucNS2GyFHn pic.twitter.com/N7PRqm5q3v

One example is Zeus from last year’s The Invisible Man. His IRL doppelganger is Indiana Jones. Wrong genre name, but adorable pooch.

We don't care whether you like "The Invisible Man" (2020) or not, we give it 5 stars for not only not killing adorable Zeus but for not just writing him out of the story either! Adopt adorable good boy INDIANA JONES.https://t.co/Hfgt4Db6H8#adoptdontshop #horrorfam pic.twitter.com/kq2skM85EV

Not exactly horror, but Hocus Pocus is horror adjacent, right? Simon here is a cat who looks just like Binx from the ’90s cult classic.

Is it just us that are kinda bummed at the end of "Hocus Pocus" (1993) when Binx becomes Thackery again? Sure he's kinda cute but um now he's not a cat anymore?! Adopt SIMON & we promise he'll never turn into a 90s teen with a mushroom cut.https://t.co/EBf3x2ujED#hocuspocus pic.twitter.com/RUQ10EYKOJ

There wasn’t only an evil goat in The Witch. There was also an adorable doggo named Fowler, whose real-life double Rhett is looking for a foster. He just wants to live deliciously too.

Black Phillip gets all the love in "The VVitch" (2015), but what about the adorable Fowler?! Sure, he doesn't eat sticks of butter or speak for Satan or whatever but look how cute he is! Adopt RHETT and live deliciously.https://t.co/D08Y7xhcSh#HorrorFam #horrorcommunity pic.twitter.com/iaQCmgJuN2

There are a lot more adorable animals to check out and to hopefully adopt, if you head on over to Texas ChainPaw Massacre and have a look.