Six episodes into Teen Titans, Raven loses control. Under attack by Doctor Light, she warns in a strained voice, “Don’t come any closer.” When he does, her eyes go red. Tendrils of black energy shoot from beneath her cloak; she drags him, screaming, into the darkness. She only stops, snapped to reality, when Robin yells her name. Once she realizes what’s happened, she escapes into the shadows.

Raven relies upon meditation and emotional maintenance to keep her powers—namely, her Rage—from overtaking her and causing destruction. However, her necessary restraint is often read as dispassion or malevolence. Beast Boy calls her creepy, while Starfire, ever the diplomat, says: “Raven is…complicated. There is much about her we are not meant to understand.” Forced into darkness by her parentage, Raven’s persistence despite the apocalypse revealed both the depth behind darkness and its undercurrent of hope. 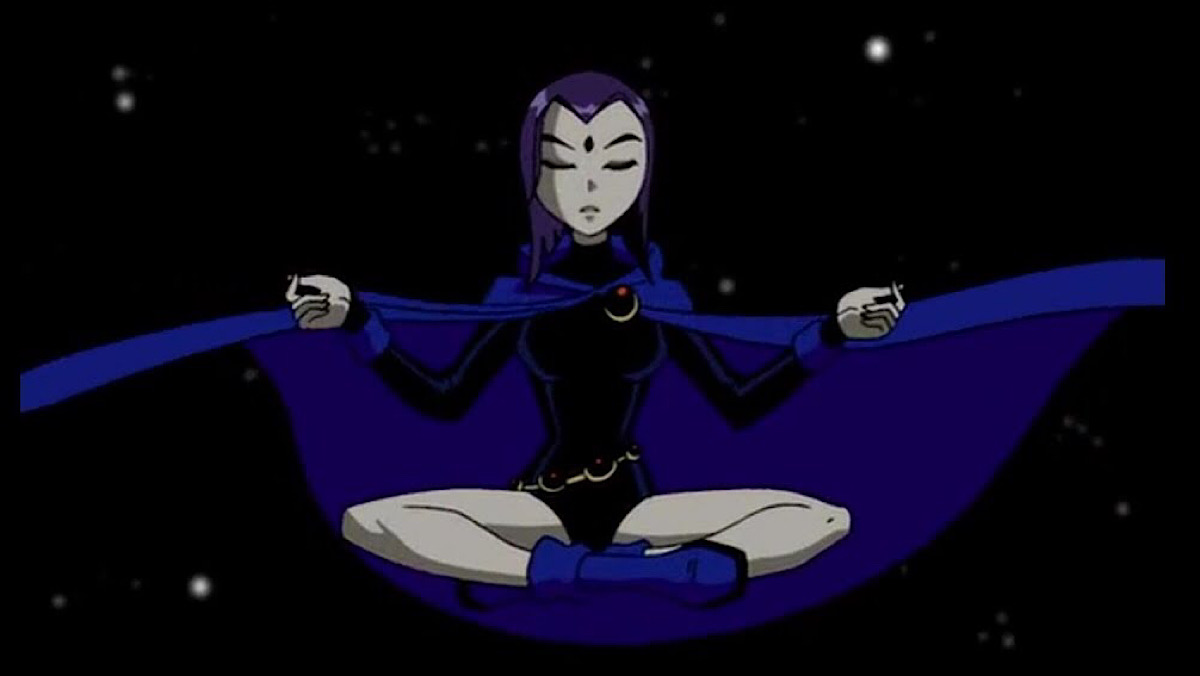 On her birthday, Raven’s destiny rises up to meet her. After years battling the Rage in her head—a manifestation of her father Trigon—Slade reappears, now working as the demon’s messenger. The message? The time has come for her to end the world.

He rips her clothing to expose her father’s marks; he impresses the inevitability of her destiny, how it’s coded with her very being. But when he says “You can’t run away from who you are,” Raven answers, “I can try.” Every action she takes is a protective measure: protecting her friends from the truth, protecting the earth from destruction.

Used for her power throughout the series—by her father, as a portal; by the dragon Malchior, to be set free—she does lose control at times, and that loss of control is often paramount to her enemies’ destruction. But when her Rage shakes loose of her own volition, like when she attacks Slade after his torment, her friends sit wide-eyed at the side. The tenets of heroism don’t necessarily allow for people like Raven, who spark with danger.

But those viewers who see themselves in Raven—her purported darkness, her lonerism, her propensity for hiding away with a book—it’s rewarding to see her Rage turn loose on her abusers.

Tormented all her life by the Rage in her mind, forced to keep her emotions at bay, silent about the destiny that lay before her, Raven’s finally free after Trigon takes over the Earth. However, she’s rendered a child and apparently stripped of her powers, which came from Trigon. But that’s when Raven discovers powers all her own. 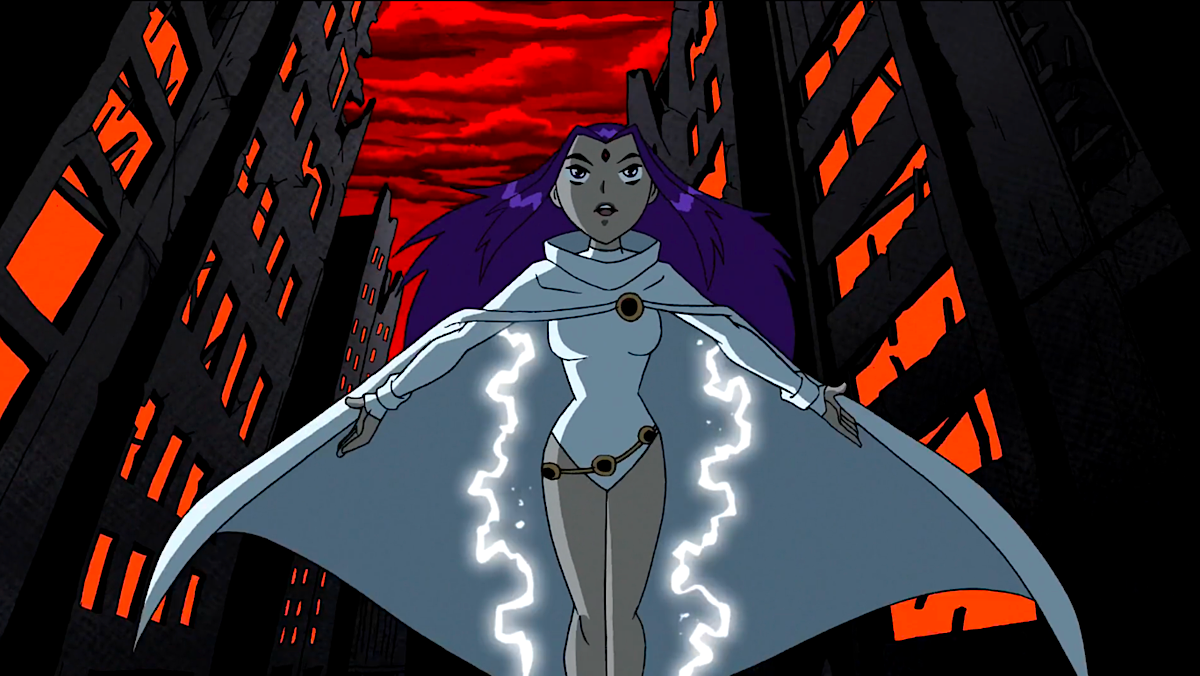 Only a handful of times in the series does Raven don a white cloak. It’s a signifier of purity, but also of her most primal power. Once she’s free of her father’s influence, her cloak is white. And when her friends lie unconscious, her hopelessness turns to determination. As Robin intoned earlier, it’s her story, and when the time was right, she would know what to do.

Trigon demands: “What hope can a mere child have of defeating an all powerful father?” She defies him, eyes glowing white: “You may have created me, but you were never my father.” Emerging from the glow fully grown, she advances on her demonic father, wielding new, white powers.

The team awaken and watch Raven in awe as she says, “Fathers are kind. Fathers protect you. Fathers raise you. I was protected by the monks of Azarath. I was raised by my friends. They are my family. This is my home. And you are not welcome here.” 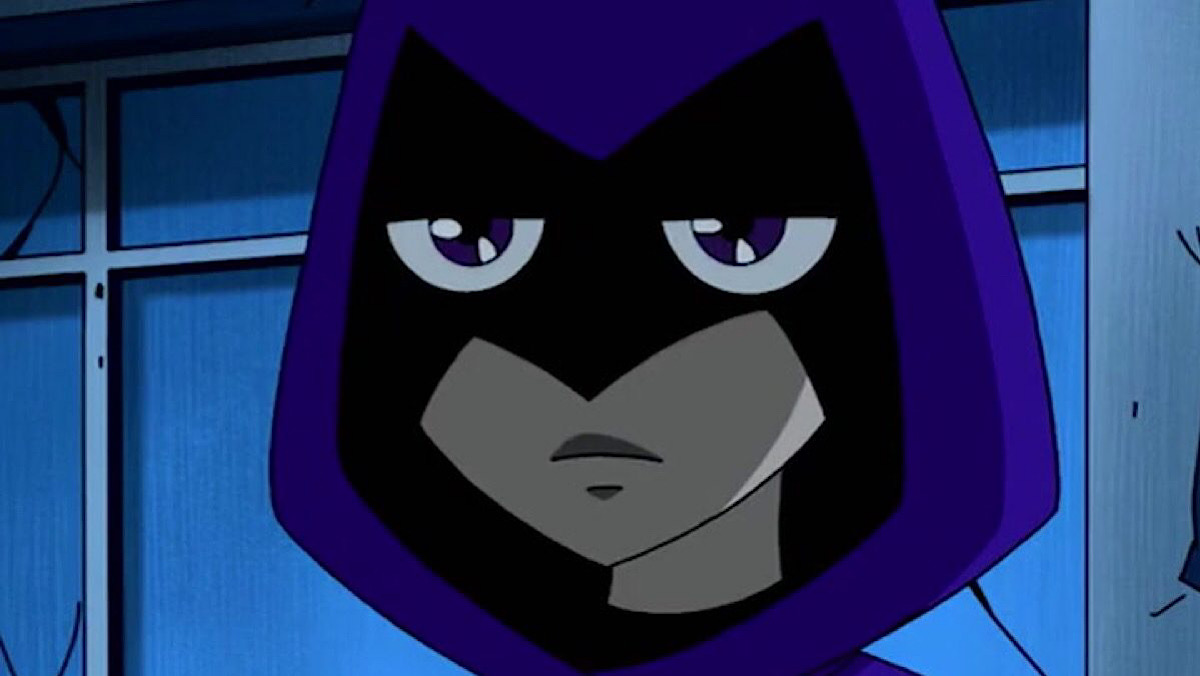 Just as she led to the apocalypse, Raven brought it to an end. Born to be a portal of destruction, Raven subverts destiny through the hope that she carries and that her teammates inspired in her.

Raven’s ownership of her destiny reflects a darkness recognized for its complexities, and the overwhelming ability of anyone who may be misunderstood to be a source of strength and power.

It’s just as Robin said: “From the day you were born, they said you were evil, that you were created to do unspeakable things. But you wished for more. You dared to hope that you could be a hero.”