The TED LASSO Cast Shares Their Favorite Season One Moments

There’s a sense of endless joy that comes from watching Ted Lasso. It’s an infectious energy that, after 10 wonderful episodes, prompts the viewer to start all over again—after telling everyone they know to watch. So much so, that a brief mention of the “darts scene” or “karaoke” or  “yoga mums” will elicit a knowing chuckle and, presumably, a lot of commentary about how lovely it is. While we’re anxiously awaiting season two in just a few short weeks, we had some lingering questions. Namely, there’s so much viewers loved about season one, but what moments do the Ted Lasso cast look back fondly on? Several cast members talked to Nerdist about their favorite season one scenes and the moments that meant a lot to them. 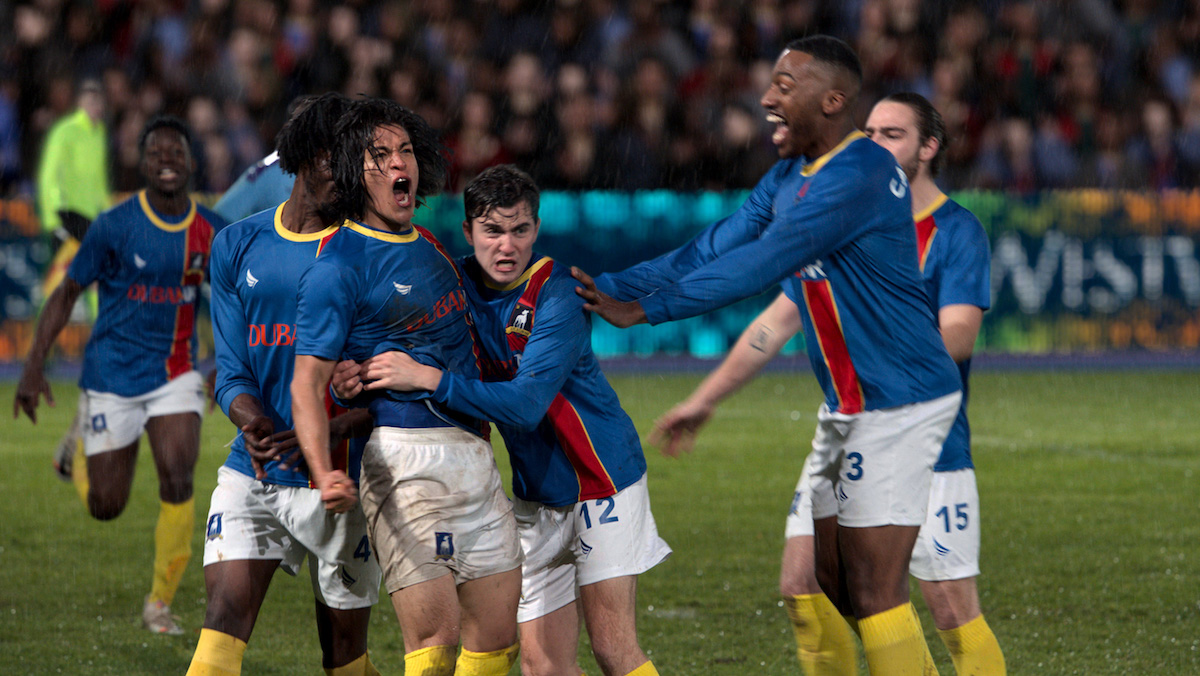 For Cristo Fernandez, who plays AFC Richmond’s enthusiastic “ace,” it was during the team’s trip to Liverpool for their match against Everton. The team’s in a funk at the prospect of facing off against a team they haven’t beaten in 60 years, until a roast from kitman Nate Shelley, played by Nick Mohammed, ushers them into the right mindset—and an eventual win. “I love that scene we have in the locker room with Nate the Great—that change in point in his arc and how he gave us this speech,” Fernandez said. “[The] roast me amigo [scene]. I mean that just was spot on. That was just amazing. Nick Mohammed is amazing. Everyone was great. Everyone, even the people that probably didn’t say anything. There were just good vibes there in that locker room. I remember they shot many great scenes there.

Tobeeb Jimoh, who plays rising star Sam Obisanya, revealed that his favorite scene was the team’s bonding exercise to rid AFC Richmond’s treatment room of its many, many alleged ghosts. It’s an incredibly fun scene to watch, and Jimoh shared that it was just as much fun to shoot. “I’d say mine was when we were doing [the scene] when everyone was putting their cherished item into the bin to burn it, to get rid of the bad mojo for Dani,” he said. “That day was hilarious. There’s so much that didn’t make it but we had every single one of the players. Even the SA’s who don’t speak, every single one of them come up, put an item in, and say their little piece. It was just hilarious. The amount of corpsing that happened that day was unreal. We barely got through it. Yeah, that was probably my favorite day.”‘ 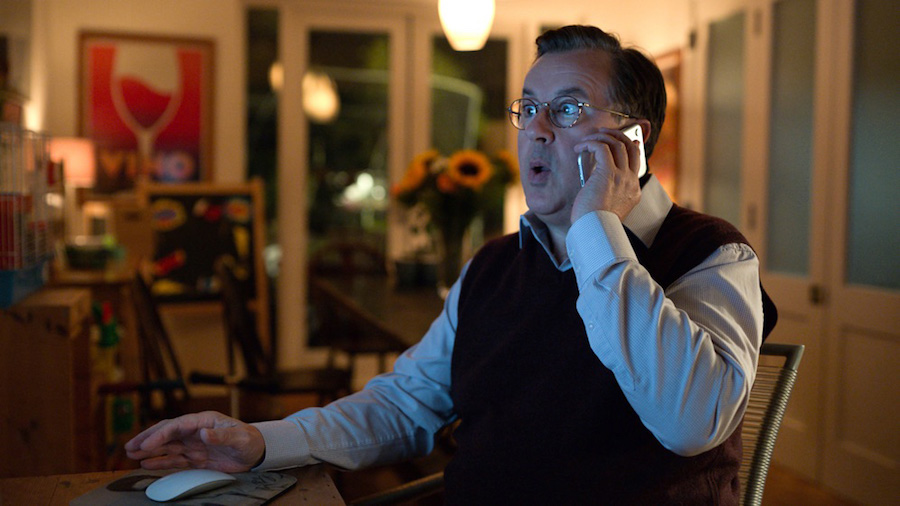 Unsurprisingly, many of the cast’s favorite scenes involve Nick Mohammed’s well-meaning but supremely unconfident kitman. Jeremy Swift, who plays AFC Richmond’s Director of Football Operations, it’s a brief but incredibly telling moment from Nate in the pilot episode that stands out.  “Oh, God. There are so many,” Swift said. “I love the darts scene, obviously. There’s a moment when Nate introduces Ted and Beard to Rebecca and then he kind of runs off. And there’s one point where he runs back in again, which is just in the first episode, but it’s just so funny. And I thought, ‘Why is that so funny?’ It’s because he’s so terrified, he doesn’t know where he is or where he’s going, even. He’s that heated. That certain panic is just absolutely hilarious.”

Juno Temple, who plays professional WAG-turned-PR maven Keeley Jones, revealed a few of her favorite Keeley scenes and ones she was just able to witness on set. “The three-way hug in the last episode with me, Beard and Ted, I laughed and cried at the same time I was so not expecting it. That was an immediate [imitates crying],” Temple revealed. “And I love the scene with [Keeley and Roy] in the press room. And I just am proud, I’m really proud of being a part of those scenes because they really hit home watching them.”

Temple also shared that a few of her favorite scenes were from the Gala episode, “For the Children.” Specifically, Rebecca and Ted’s conversation outside the gala, after Rebecca’s ex-husband Rupert crashes. “That first really honest moment between Rebecca and Ted was one that was very profound to watch,” Temple said. But as for a very different, but hilarious moment from the same scene, she added, “I also liked when Jamie Tartt spills hot soup on his nipple. That was a cold soup when we shot it. That one’s funny as well.” 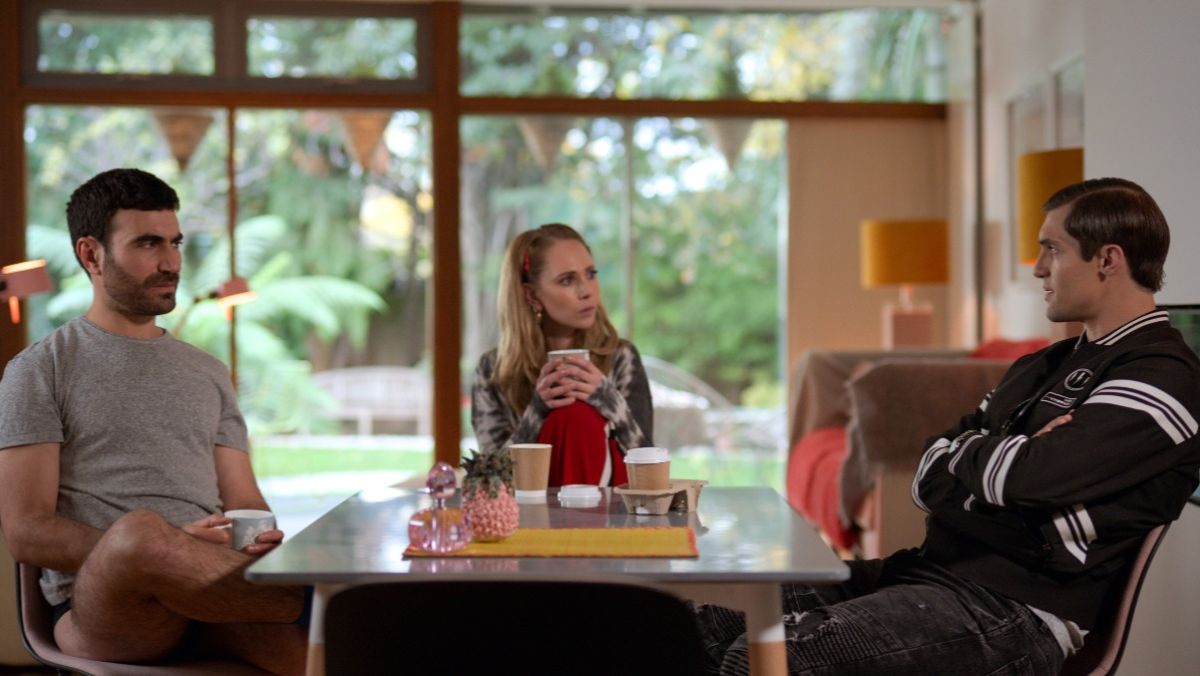 Brett Goldstein, who plays the grumpy, but so very endearing captain Roy Kent, echoed Temple in saying his favorite scenes were Keeley and Roy moments. He also shared that one of his favorite scenes to witness was when Rebecca finally comes clean to Ted.  “[It’s] my favorite scene that I am in—but I’m not a big part of—but I just loved being a witness to,” Goldstein told Nerdist, praising Jason Sudeikis and Hannah Waddingham. “As I said, I’ve got loads of them, but I tell you what, I’ll tell you something, I don’t know if I’ve talked about this before. I was in the room [during] the scene where Rebecca confesses to Ted and they have that moment. I was in the room when it happened. I mean, it was fucking magnificent, like it was in the room magnificent.”

Like many of his castmates, one of Phil Dunster’s favorite scenes involves Nick Mohammed. The actor, who plays the team’s superstar with a very bad attitude Jamie Tartt, said, “Well, I guess as everyone knows the greatest moment in season one is the moment when trying Trent Crimm asks who Nate the Great is, and they look over to Nate the Great picking dog poop off of the field. Nick Mohammad is genuinely one of the funniest people I know. His timing is so good. I just love that bit—[it’s] such a great moment.”

Dunster also shared that one his favorite moments to film was when Ted loses his cool on Jamie in the locker room and brilliantly recreates Allen Iverson’s now-legendary 2002 “practice” press conference rant. Praising the series creators for so many incredible niche references throughout the season, the actor admitted he wasn’t familiar with the NBA Hall of Famer when Sudeikis mentioned the speech to him.

“And so I watched this speech. The way he turned it around and the way that Jason had approached it. Certainly this was the first time, I know Ted sometimes loses his rag a bit, but very, very cautiously and only momentarily,” Dunster added. “And so to see Ted go through that process in front of me was incredible. And it was really great to watch. [To] see someone as sort of as brilliant and gifted as Jason doing that was, yeah, it felt like a really quite sort of profound moment. 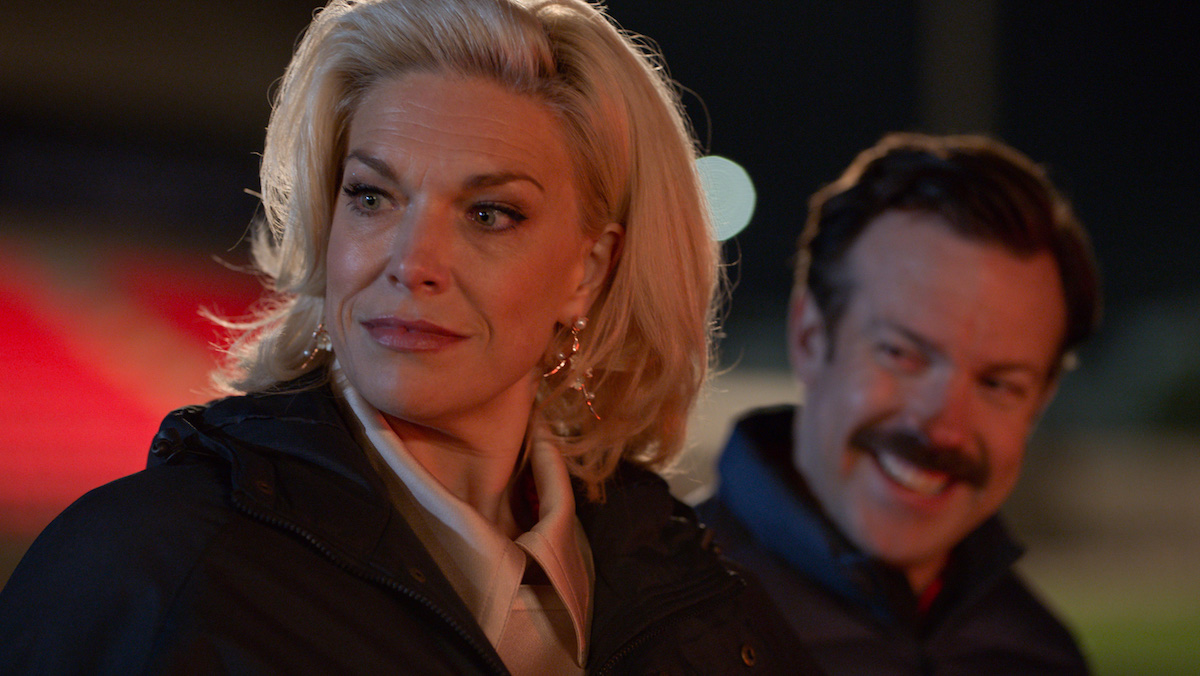 Rebecca Welton is the steely, glamorous club owner coming back after a humiliating public divorce. While Rebecca starts the series in an adversarial role, Hannah Waddingham plays the character with such pain and humility that it’s nothing short of moving to see her come around and let Ted and the team in over the course of the season. Waddingham spoke to Nerdist about the episode “Make Rebecca Great Again” and Rebecca’s big karaoke scene.

It’s an emotional episode for Rebecca, as she reunites with an old friend and starts to let her team—and Ted—in. But the episode also features a giant musical number from Waddingham, an accomplished West End performer, as she belts “Let It Go” at a karaoke night.  “It is a big song. I tried to wriggle out of it, because I was just like, ‘Look, one, everyone has sung it. Two, people have sung it brilliantly. And three, I was acutely aware that Rebecca isn’t a professional thing like I am,'” Waddingham revealed. “So, it was trying to make it believable that she would begrudgingly be getting up and then find her feet, and more importantly in all of it, enjoy the moment with her teammates. Almost the singing of it for me was secondary to where we find Rebecca in that moment. And that was what I wanted to convey.

Speaking of the song’s resonance to the episode, and Rebecca dedicating her performance to her goddaughter, Waddingham added, “It’s lovely that she has that moment of looking into the phone and saying, ‘This is for you.’ I mean, at the time I kind of found that quite hard to do because I have a little girl myself, so any connection there was always going to be particularly raw.”

Season one of Ted Lasso is currently streaming on Apple TV+. Season two premieres on July 23.